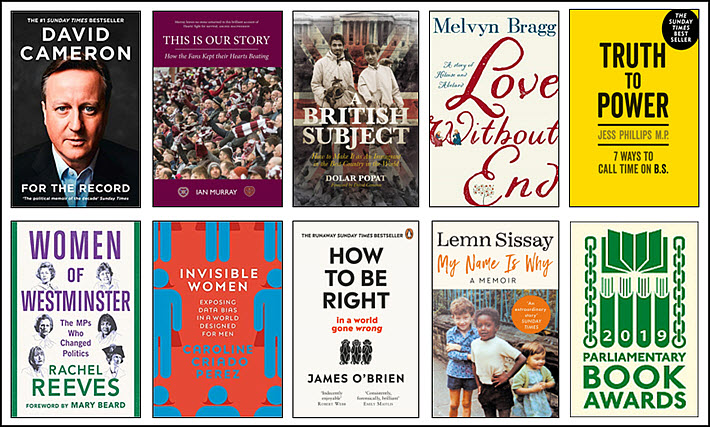 ‘Issues that are important to the public today’ are examined in today’s three shortlists that the UK’s Parliamentary Book Awards held back—to let the general election roll through.

‘The Turbulent Events of Recent Years’

Established in 2016 by the UK’s Publishers Association and Booksellers Association, the Parliamentary Book Awards are devised to “champion the best of political writing and celebrate the link between politics and the book world.” 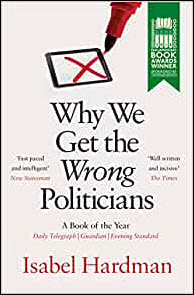 And the program is the latest in the army of publishing and book awards to make an early-year announcement, in this instance touting a shortlist of titles that touch variously on issues, as one official lists them, of “identity, truth, gender politics, and community.”

As nonfiction in so many international book markets is being buoyed by political interest—maybe political desperation—this sector of the book business already has helped support strong nonfiction sales,  and some of these titles can be expected to be at the leading edge of that trend in the UK market.

As was explained in a small story from The Bookseller staff, the award ceremony for this program originally was set for December 4, but was moved to February 26 because of something fairly political—the UK’s hotly contested general election. As the BBC has reported, that election, according to Brexit secretary Steve Barclay, provided an “overwhelming mandate” for his party “to take the UK out of the EU” on January 31.

So it is that when the delayed awards ceremony occurs late in February, it will happen in a House of Commons no longer in Europe.

The event is to be hosted by Isabel Hardman, who won the prize for a political book by a non-parliamentarian last year. Not to be missed is the resoundingly salient title for which Hardman won: Why We Get the Wrong Politicians from Atlantic Books.

There are three categories in this program, as it announces its shortlists today (January 16):

Publishers were invited to nominate books and authors for the awards, and the shortlist was drawn up by booksellers. Nominations closed in October. Voting is now open for members of parliament to decide the winner in each category.

Biography or Memoir by a Parliamentarian

In a prepared statement, Stephen Lotinga, CEO of the Publishers Association, is quoted, saying, “This year’s shortlist of books provides us with important insights into the turbulent events of recent years and shines a light on ideas of the nature of power, identity, and truth in politics.

“I look forward to celebrating all of these important books, their authors, publishers and booksellers at the House of Commons in February.”

And from Meryl Halls, managing director of the Booksellers Association, we read, “The Parliamentary Book Awards recognize the high quality of political writing today, and we look forward to celebrating this year’s fascinating shortlist.

“Selected by British booksellers, this shortlist really show the issues that are important to the public today; identity, truth, gender politics, and community. We are excited to see who our parliamentarians vote for in the coming weeks.”

Past Winners of the Parliamentary Book Awards

In its review of previous winners, it’s interesting to note that the original batch of categories numbered four, not three: there was an award for Fiction by a Parliamentarian. One can be forgiven for musing that perhaps the astonishing nature of today’s outlandish political life has rendered fiction in the field unnecessary. 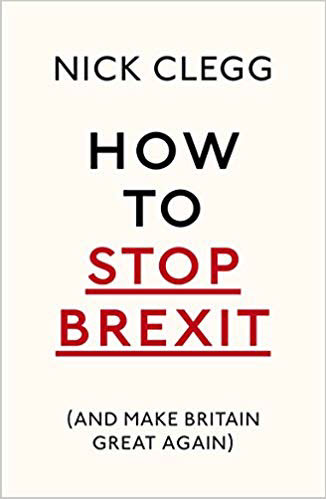 The 2017 win for Nick Clegg’s How to Stop Brexit (And Make Britain Great Again) from Penguin Random House’s Bodley Head may have special poignance for many reviewing these lists.

More from Publishing Perspectives on publishing and book awards is here, and more from us on the UK market is here.