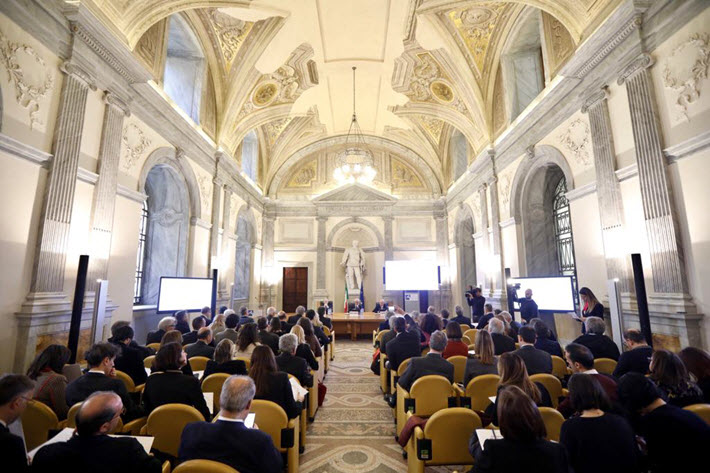 Costing the books industry as much as €528 million, piracy is a major target for Italian book and news publishers in 2020.

Members of AIE and FIEG, the Italian book and news publishers’ associations, meet in Rome’s cultural ministry to hear the results of their joint study of piracy’s impact on the industry. Image: AIE

As Much as 23 Percent of the Market Impacted

“This is dramatic data that goes beyond any expectations” in describing the extent to which piracy is present in the market, according to AIE president Ricardo Franco Levi in his address to a joint meeting this morning (January 22) seated in Rome at the ministry of cultural heritage and activities in the Via del Collegio.

“This data reveals the need for the imposition of strong law enforcement and the education of users who are not always fully aware of the effects of their behavior.”

AIE and FIEG are reporting an annual loss of some €528 million (US$585 million) to the books industry and an aggregate of €1.3 billion when news publishing is added in, accounting for as much as 23 percent of the market, exclusive of exports and educational content.

The two organizations jointly commissioned this research from IPSOS. The project was executed in November with a sample of 4,000 respondents selected for factors including gender, age, geographical location, educational and professional status, and other elements.

Some of the key highlights of the study’s assertions, briefly:

In terms of employment, as many as 3,600 jobs in the book world may be lost to publishing, the associations said. When that figure is extrapolated to related goods and services, piracy 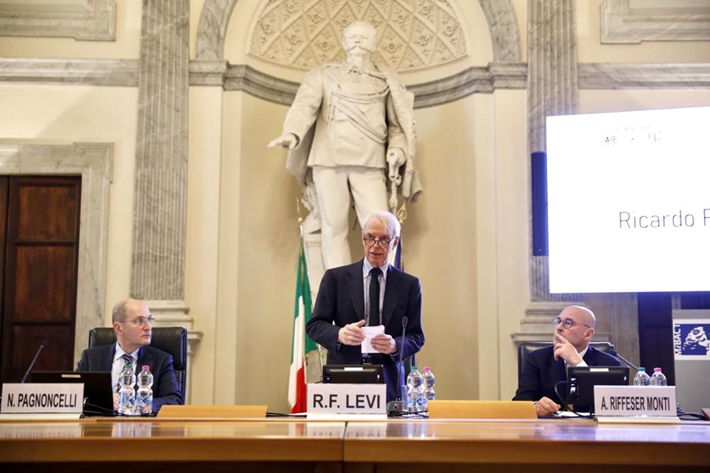 The Association of Italian Publishers’ president Ricardo Franco Levi, center, speaks in Rome at the joint meeting on piracy of the AIE and Italy’s Federation of Newspaper Editors, FIEG. To the left is Nando Pagnoncelli of IPSOS, which was commissioned to do the study. To the right is Andrea Riffeser Monti, president of FIEG. Image: AIE

Some of the most interesting revelations in the report have to do with who the researchers can identify are the pirati, the pirates.

As is often the case—and a part of what makes combatting the problem so difficult—the culprits are everyday users, many of them unaware of how damaging their fondness for free or cheap content can be.

Some 36 percent of users—more than one in three Italians older than 15, the researchers found—carried out at least one act of piracy with a work of published content in the last year.

In the university setting, the issue is more dramatic, with some 80 percent of university students committing at least one act of piracy—involving either physical or digital content—in the last year. And 81 percent of professional respondents—including attorneys, notaries, accountants, engineers, and architects—said they’d committed at least on act of piracy in the past year.

Speaking in the morning’s session for the research effort, however, IPSOS president Nando Pagnoncelli said the general public, for the most part is not unaware that piracy is illegal.

Some 84 percent of those older than 15 told researchers this, he said. But 66 percent said that piracy is unlikely to be discovered and punished by authorities, and 39 percent said that they don’t consider piracy to be serious enough to prosecute.

FIEG president Andrea Riffeser Monti spoke to vulnerabilities that have come into the marketing along with the advantages of digital publishing.

Some of the ways Monti’s association experience the problem is in online reviews that are copied and distributed without authorization, PDF editions of newspapers passed among users often on various social media and smartphone apps.

“It’s necessary,” Monti said, “to improve our safeguards against all these parasitic forms of copyright infringement.”

He called for a public campaign targeting readers of books and newspapers, noting that the study’s proof of the interest in the written word, both in news and literature, is positive.

And he also made the point, frequently heard now in piracy discussions, that ensuring easy legitimate access to content is important, the “abundance over scarcity” context in which it’s believed that piracy is less attractive because users don’t have to resort to illicit means to attain content they want.

Speaking for the government, Andrea Martella, an undersecretary for the president’s council, said, “As a government we cannot ignore the data that has emerged from this research and the request for help that comes to us from the publishing sector.”

Martella said that the government is “studying new tools to support news publishing at the direction of Piracy must be combated by the repression of illegal behavior, promoting legal education but also with support for the entire supply chain, which has been so badly affected. Through publishing 5.0 we are studying new tools to support periodic and daily publishing because, as Italian president Sergio Mattarella said when visiting the news agency ANSA last week, news content “constitutes a decisive element for democracy in our country.”

And that, Martella said, dovetails with ministry directives for a parallel effort in book publishing.

More of Publishing Perspectives’ coverage of the Italian market is here. And more from us on international issues in piracy is here while more on copyright is here.