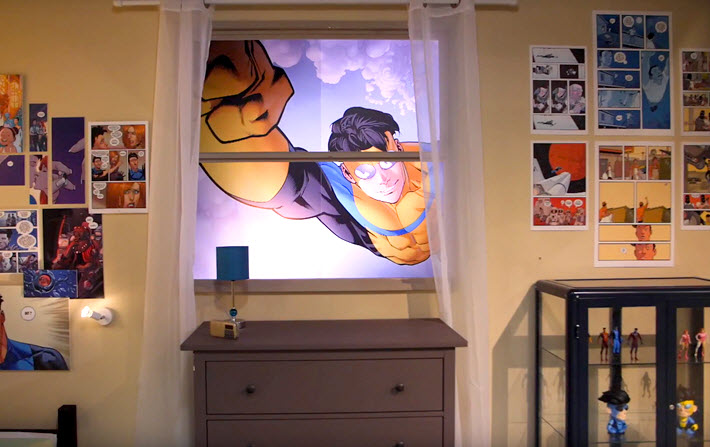 An independent publisher from Barcelona, Stéphane Corbinais says his comics house must be at Angoulême—or ‘you don’t exist’ in the bande dessinée world.

A shot from an exhibitor display being set up for the opening of the 2020 Festival International de la Bande Dessinée d’Angoulême. Image: FIBD video

For the Buyer: ‘A Multitude of Choices’

Less than two hours northeast of the town of Bordeaux, the town of Angoulême in November was formally designated a member-municipality of UNESCO’s Creative Cities program, and France’s ministry of culture has named 2020 the country’s “Year of the Comic Strip,” giving special energy to the festival, its presenters, and visitors this year.

Angoulême probably is best known internationally, in fact, for its celebration of the form, and this year has announced that its four days will comprise more than 350 events, based in 14 focal exhibitions. There are authors and illustrators pitching their work to publishers, several awards programs, exhibitions of work, musical programming, and more.

Rights center conferences have begun today (January 29) with “An Assessment of the International Comic Strip Market” and “From Paper to Screen: Spotlight on the New Challenges of Audiovisual Adaptation”—all closely paralleling, of course, the accelerating impact that streaming video developments are having on so many parts of publishing.

The festival’s media messaging reports that growth of the comic strip market in France in 2019 is estimated to have come in at some 10 percent, and in 2018, the country’s industry published at least 5,298 new releases and new editions. Drawing on data from Livres Hebdo, BIEF, and SCELF, Angoulême organizers say that international rights to 3,958 comic books were sold by French publishers in 2018 and that comic book translation accounted for 17.7 percent of all translated narrative work in France in 2018. 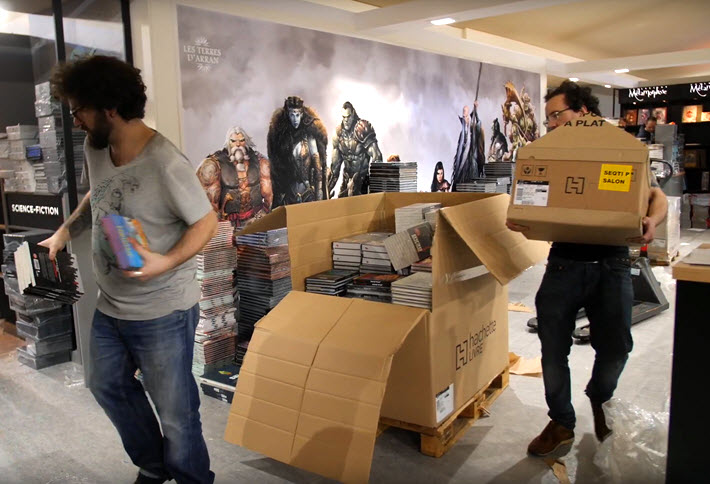 A display on the Hachette stand is being set up in this shot from a promotional video for the 2020 Festival International de la Bande Dessinée d’Angoulême. Image: FIBD video

In words- (and pictures) to-screen terms, as many as 50 film and/or television adaptations of French comics have been made between 2016 and 2019, festival organizers say.

All this has resulted in some 75 exhibitors coming to the festival this year, along with 2,000 industry professionals from 35 countries. A special professional program has an invitational cohort of 21 non-French publishers who will be on-hand to consider making purchases. That group of invitees is from 13 markets.

So diverse and complex is the sector of comics and graphic fiction and nonfiction becoming that we’re pleased to have had an interview with Stéphane Corbinais, the founding chief of one of Angoulême’s 2o20 show exhibitors, the dual Bang Ediciones & Mamut Comics on the New World Stand at N19. One reason he has a strong first-person sense for where the market is today and may be going is that Mamut serves the children’s and YA consumer base, while the original Bang produces content for adults.

Corbinais founded Bang in 2004, and followed with Mamut in 2010. And our interview has been facilitated, especially in translation, by Tel Aviv-based agent Stephanie Barrouillet of the SB Rights Agency.

We begin our exchange with Corbinais by asking whether his dual houses Bang and Mamut, focus on comics for the younger consumer and graphic novels and nonfiction for adults. And in asking, we run right into the terminology issue, which of course may be easier for a single publisher to handle than it is for an industry that needs categorization to classify and organize its products.

Talking About Comics and Graphic Storytelling 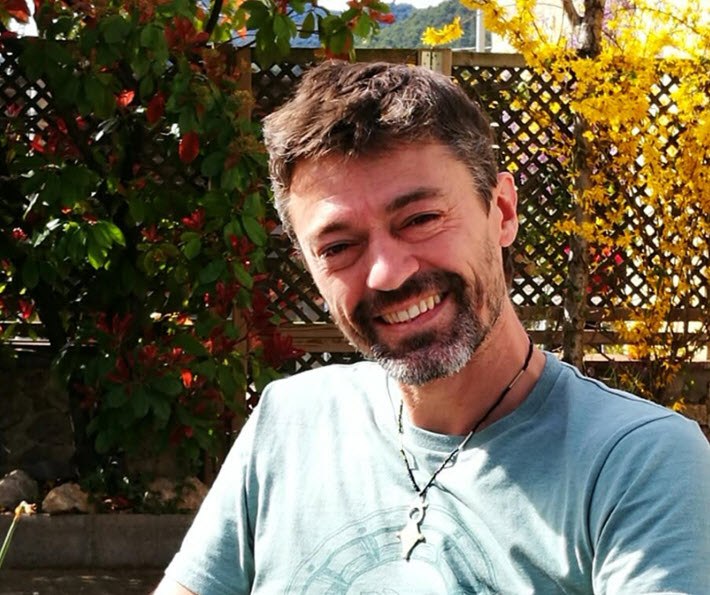 Stéphane Corbinais: It’s an interesting question as it deals with semantics.

Today in France, Spain, the USA, and probably in other countries, terminology appears to avoid bande dessinées or comics or [in Spanish] tebeo. We talk about a roman graphique, a graphic novel or novela gráfica, to raise the profile of this new art form that appeared in the 20th century and to move away from the image most people have had of the genre, that they’re for kids or freaks.

At Bang Ediciones, we don’t make any distinction and we think that bande dessinée is bande dessinée and that there’s a bit for everyone—humor, adventure, intimate, engaged for adults and for children. Bande dessinée is the only sector in the publishing industry that’s growing worldwide. It’s now an established art in constant evolution. The choice today for a buyer is complex given the multitude of choices, but that’s a good position to be in.

Publishing Perspectives: What trends can you see developing over 15 or so years you’ve been in operation?

SC: When we launched our collection Mamut in 2010 in Spain, bande dessinée was really for children in people’s minds, but all the books from alternative publishing houses were targeting an adult audience.

This paradox gave us the idea to create books for children with contemporary authors. We didn’t have an immediate success with consumers, but professionals—in particular librarians—welcomed our initiative.

Titles in the ‘Super Potato’ series for children by Artur Laperla

PP: What have been your successful titles over the years? Can you give us one example for children and one for adults?

SC: The title for adults that has worked the best for us is Mox Nox, published in 2013. It’s made up of wordless spreads—six boxes per page—acid and absurd humor and a naïve style.

The success was immediate and very unexpected. The title first took off on social networks—the visual and silent elements of the stories on one page could be shared worldwide. Unfortunately, our relationship with the author was unpleasant. Luckily our flawless relationship with Artur Laperla let us enjoy the adventures of his “Super Potato” series, Super Patate, the greatest success in our catalogue for children.

For the last nine years, we’ve been publishing one book a year and it’s translated into Italian and English. Our children’s list, organized by ages, has had a lot of success in Spain. In France, it’s more challenging because the market is very established. Having said that, our Mamut 3+ collection does very well, a standout because we’re one of the few publishers to offer textless comics for children from the age of 3.

PP: What trends are we likely to see most during 2020 in comics for children and for adults?

SC: This year and in years to come, we’ll most probably see the bande dessinée become an art form that stands on its own. If the 20th century was good for the novel, the 21st century will be good for the bande dessinée, in part because of the place that visual imagery is taking in our world and the fact that children are more exposed to images than words.

“The festival is a must for us in France, even if we don’t always cover our investment. If you don’t go, people think you don’t exist.”Stéphane Corbinais, Bang Ediciones

PP: How does the Angoulême festival affect your work and the industry?

SC: The festival is a must for us in France, even if we don’t always cover our investment. If you don’t go, people think you don’t exist. But it’s also an opportunity to see exhibitions and to meet people including foreign publishers, to expand our reach internationally.

PP: What’s the most difficult challenge faced by a publishing company like yours?

SC: After 15 years in the business, the toughest part is over. It takes time to be known in the publishing world at the beginning when one has limited resources and an empty address book. However, it’s essential even today to reinvent ourselves all the time.

More than 5,000 new titles are released in France every year. Even if there are more readers, a lot of titles fall by the wayside.

The big publishing houses are aware of this and they flood the bookstores, leaving limited space for the others. If you’re not present in bookstores you won’t sell. Luckily, readers are curious and found us through alternative channels on which we work actively.

‘Immersed in a World of Images’

PP: Is your main competition other independent publishers like you or large major houses and comics producers?

SC: Rivals vary depending on titles and collections. Our competition is very diverse and therefore our ability to adapt and respond is crucial. Beyond this, we try to keep in mind what drives sales: publishing books that we’d love to find, ourselves, in bookstores.

“Rivals vary depending on titles and collections. Our competition is very diverse and therefore our ability to adapt and respond is crucial.”Stéphane Corbinais, Bang Ediciones

PP: As we see more and more consumers buying and reading comics and graphic novels, what do you think is encouraging them? Is it the visual storytelling of film and television?

SC:  The new generations are immersed in a world of images. Since the invention of television, it hasn’t stopped, and some children today can barely read a text of more than 30 lines. But within a second, they can read an image.

PP: Do you exhibit at other festivals or book fairs?

SC: We’ll attend several fairs in France and Spain this year. We choose where to go depending on the nature of the fairs, their artistic choices, and management. We like to go where the organizers want us to be there. We feel it’s important to have an event that’s not purely commercial but also a place to meet people with shared interests. We’d love to have more time and money to attend major international book fairs where one can find surprising projects and meet passionate people.

PP: Lastly, what’s your personal connection to this kind of content? Did you grow up reading comics or did you find them later in life?

SC: As a kid at my grandmother’s house in Brittany, I first discovered Tintin and Obélix titles that belonged to my father. I read them over and over and then read Gaston Lagaffe, Spirou, Lucky Luke, and a lot of fantasy: L’ l’Incal, La quête de l’oiseau du temps, all of Bourgeon’s work and of course Thorgal—in fact, anything I could find.

In my 20s, I stopped when I went to university and moved to Spain. Eight years later I reconnected with bande dessinée when I met Jean-Christophe López, the publisher of 6 Pieds Sous Terre, who introduced me to his catalogue and the new scene of bande dessinée, known as “independent.”

Of course it lit a spark, and I decided to create Bang Ediciones. 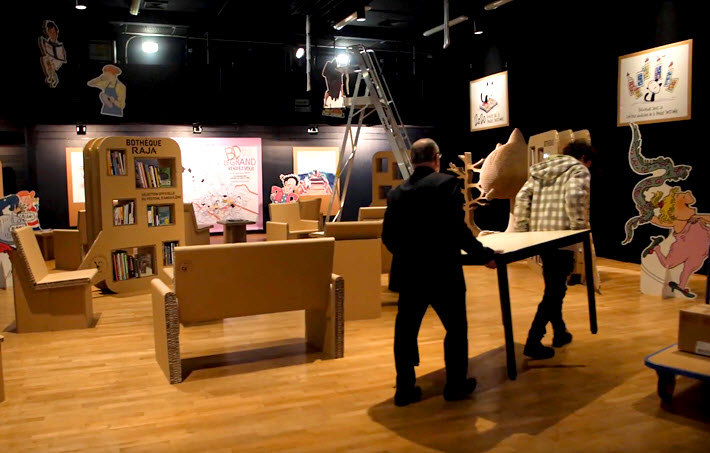 More from Publishing Perspectives on comics is here, and more from us on the French market is here.