The World Economic Forum’s 50th anniversary week of meetings at Davos included a session on international philanthropy’s role in alignment with goals of the UN’s sustainability program. 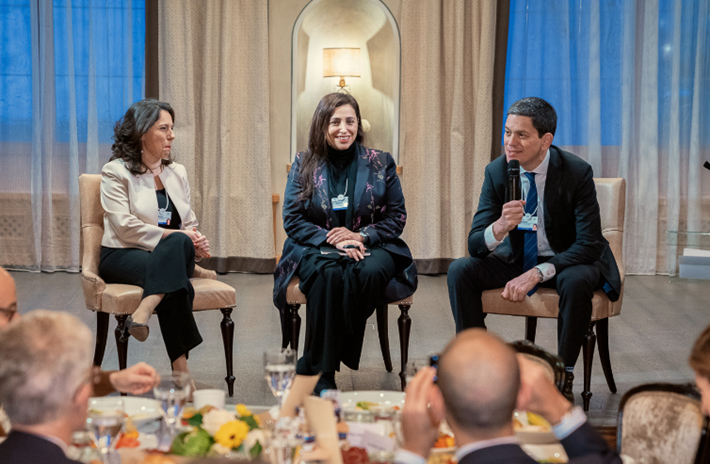 At the discussion on philanthropy in emerging economies and sustainability goals during the 2020 World Economic Forum annual meeting in Davos are, from left, Sara Pantuliano of the Overseas Development Institute; the IPA’s Bodour Al Qasimi, Kalimat Foundation for Children’s Empowerment; and the International Rescue Committee’s David Miliband. Image: Crescent Enterprises

For example, Davos’ focus sessions on “Healthy Futures,” “How To Save the Planet,” “Society and the Future of Work” and “Fairer Economies” relate to UN goals including poverty; hunger; good health and well-being; gender equality; clean water and sanitation; affordable and clean energy; industry, innovation, and infrastructure; reduced inequalities; sustainable consumption and production; climate action; partnerships; and “decent work” and economic growth.

Among many things that have become evident since the 2015 advent of the UN’s sustainable goals regime is the critical enabling role of philanthropic activity in support of the challenges ahead. The world body has called for achievement of the Sustainable Development Goals by 2030, an aggressive timetable with so much that needs to be done.

And a key hurdle to hitting that deadline is an estimated US$2.5 trillion annual funding gap in what’s needed for cohesive, coherent action on the many fronts of the Sustainable Development Goals.

On Wednesday (January 22), the International Publishers Association (IPA) vice-president Bodour Al Qasimi of the United Arab Emirates led a high-level discussion of issues the world philanthropic community needs to handle to have the best potential impact on the effort. In “Stakeholders for a Cohesive and Sustainable World: The Role of Philanthropy in Emerging Economies,” Bodour was joined by Badr Jafar, CEO of Crescent Enterprises in the UAE.

“Philanthropists need to get much better at sharing data and learnings so that we make sure we channel precious and limited philanthropic capital to where it’s most needed, rather than to who asks louder.”Bodour Al Qasimi, IPA

“Our discussions in Davos” on the topic, Bodour tells Publishing Perspectives, were held against “the backdrop of the overarching theme of this year’s WEF annual meeting, which is ‘Stakeholders and Responsible Leadership.’

“Responsible philanthropy has a huge potential for impact in emerging markets, as governments are clearly and understandably unable alone to create and sustain enough momentum to meet the SDGs.”

And as the world publishing industry has seen Bodour do in many areas of its effort, she’s interested in ways of helping key players execute on needs and plans by the most direct means possible. This is a similar dynamic, for example, as the one seen in her IPA leadership in the new regional conferences program that started with African publishing (Lagos in 2018, Nairobi in 2019) and the Middle East (Amman in 2019). The goal in this developing program of targeted IPA programming is to move past dogged, systemic barriers to publishing’s progress and map out actionable approaches and points of attack to produce results.

In Davos, in terms of the philanthropic community’s outlook, Bodour says, a developing theme is a need to work together. “There was a consensus overall among participants that there are a lot of opportunities to improve the impact of philanthropy in emerging markets,” she says, “through more collaboration, co-investment, and improved transparency.

“We also underlined the need for more data, evidence and research,” she says. “Philanthropists need to get much better at sharing data and learnings so that we make sure we channel precious and limited philanthropic capital to where it’s most needed, rather than to who asks louder.” 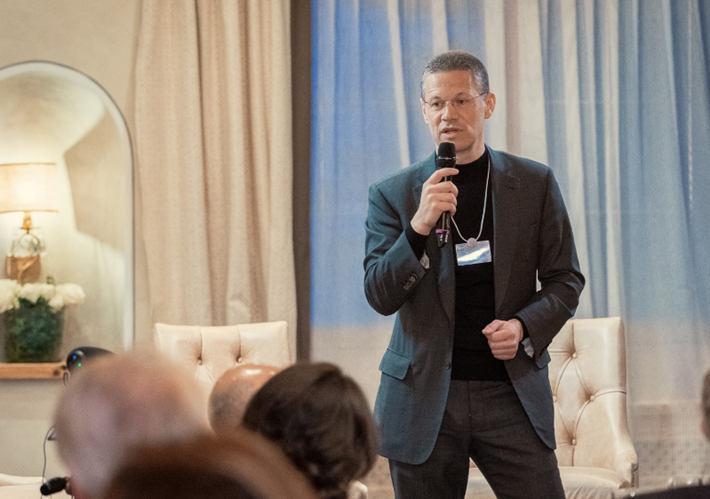 Crescent Enterprises CEO Badr Jafar speaks as a co-host at ‘Stakeholders for a Cohesive and Sustainable World: The Role of Philanthropy in Emerging Economies’ during the 2020 World Economic Forum annual meeting in Davos. Image: Crescent Enterprises

Jafar, who co-hosted with Toope, highlighted the fact that at its highest levels, the world philanthropic community has enormous resources available, particularly as rapidly developing economies in the Middle East and elsewhere come more prominently into play. “This growth,” he’s quoted in news reports saying at the event, “is expected in part because of a US$4 trillion intergenerational wealth transfer expected in the next 10 years, with Islamic philanthropy alone estimated to generate anywhere between $400 billion to $1 trillion every single year.”

But one of the hurdles facing international philanthropy, he said, is metrics. “The sector generally still lacks methodologies to track and measure impact,” he said, “and wastes resources through duplication. This is partly because of fragmentation, and a lack of established systems for collaboration and partnership”–which dovetails with the transparency that Bodour is advocating. Inter-agency competition has long been recognized in world humanitarian efforts as a barrier to progress.

Cambridge’s Toope pointed out that philanthropy’s best work lies in accurately focused efforts that respond to well studied and understood need. As quoted by Nour Salman in a readout from the session for Emirates News Agency, Toope is quoted, saying, “Too much philanthropy is still not based on research,” revealing a need for “better alignment between the research output of academic institutions and the needs of philanthropists, to improve impact.”

Bodour tells Publishing Perspectives that she leaves Davos–where in 2018 she presented a seminal white paper, on “The Digital Arab World”–pleased but convinced that cutting through the traditional complications of philanthropic response is critical, if the UN’s Sustainable Development Goals are to be properly supported.

Her involvement, as our readers will remember, also reflects the IPA’s own SDG Book Club partnership with the UN, one of the ways that international publishers are participating in the SDG initiative, as is last year’s Frankfurter Buchmesse “Create Your Revolution” campaign.

“This discussion was a step in the right direction,” Bodour tells us.. “I think more of it is needed to streamline our efforts and translate philanthropic capital into real, measurable and scalable impact.”

And this is something she’s likely to discuss with fellow CEOs this year in various events of the PublisHer program she founded last year for women in world publishing. 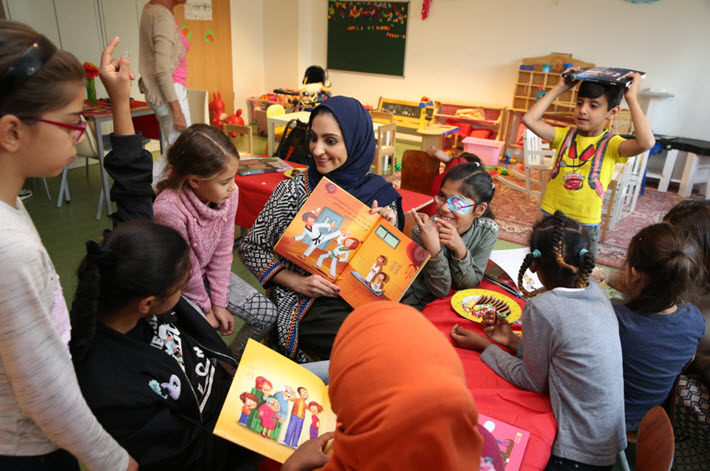 An element of Bodour’s portfolio for her work in issue-driven philanthropic response at the World Economic Forum is her Kalimat Foundation for Children’s Empowerment, which, as Publishing Perspectives readers know, has made a specialty of providing Arabic-language books for children and young adults for Arab immigrant and refugee children.

Bodour, the founding publisher of the Sharjah-based Kalimat house, created the foundation in 2016 as an outreach for the emirate’s focus on reading and knowledge-based culture. In the intervening years, the program has donated thousands of free books to younger readers in various parts of the world, both to provide educational support and to help cultivate Arabic-language speakers’ relationship to their mother tongue, particularly in diaspora.

The initiative has delivered more than 12,000 books to more than 120,000 children. One of the most effective instances, as our readers will remember, was a donation of 2,000 Arabic books to the International Library in Stockholm, for distribution through 25 libraries in Sweden, where Arabic is reported to be the second or third most frequently spoken language, thanks to immigration.

“We leave no room for doubt. We’re clear and forthright with all the material that we want to donate, and we provide the receiving entity with a description of the titles and books in English.”Amna Al Mazmi, Kalimat Foundation

And a recent focus has been on the development of the foundation’s Pledge a Library program (PaL), which is a way that donors can provide a 100-book collection of Arabic literature for children, delivered in its own custom-made wooden cabinet. Donors are invited to be present at a delivery of their libraries and to engage in reading sessions with children who are discovering their new books.

“We ended up,” Al Mazmi says, “collecting donations for more than 100 libraries within 10 days, a remarkable number,” indicating promising enthusiasm for the program. It’s expected that more details will be available when the Kalimat Foundation’s new site online is launched.

Overall, Al Mazmi speaks to the kind of streamlining that Bodour is referencing in her discussions with the major philanthropic entities at Davos.

“To be honest,” she says, “we have anticipated some sort of red-tape when it comes to providing, in some cases, foreign material–Arabic books to refugees or immigrant children. However, because of the lack of reading material, especially for children aged 3 to 17, the entities have been very eager to receive all kinds of books.

“Moreover,” she says, “we leave no room for doubt. We’re clear and forthright with all the material that we want to donate, and we provide the receiving entity with a description of the titles and books in English to make it easier for them to evaluate the books that will be donated.”

Taking that into account, Al Mazmi says, the biggest challenge is shipping and clearance. In the foundation’s recent donation to Arabic readers in Russia, for example, they needed an intervention from the UAE’s embassy in Moscow to get the books to the beneficiaries. “We do respect, of course,” she says, “the fact that there are countries that are very strict when it comes to reading material, in that you wouldn’t want there to be compromises in quality or content in books that immigrant children and refugee children receive.”

For the Visually Impaired: ARA Initiative

In the ARA initiative, the Kalimat Foundation has produced 30,000 copies of a collection of books divided into large-print, audio, and Braille formats.

The program is also engaged in a capacity-building agreement with the World Intellectual Property Organization (WIPO) and has supported its Accessible Books Consortium in training 10 publishing houses on producing “born accessible” formats, and Kalimat is developing guidelines, Al Mazmi says, for “the production of Braille and large-print books, including such details as the font, paper, color schemes,” and so on, as there have been no such outlines in the Arab world previously.

The ARA initiative for young visually impaired readers has so far reached more than 4,000 children, working through six libraries. A developing program that uses ePub3 to produce “born accessible” content is expected to quickly ramp up the reach of this part of the effort, thanks to its digital delivery capacity. 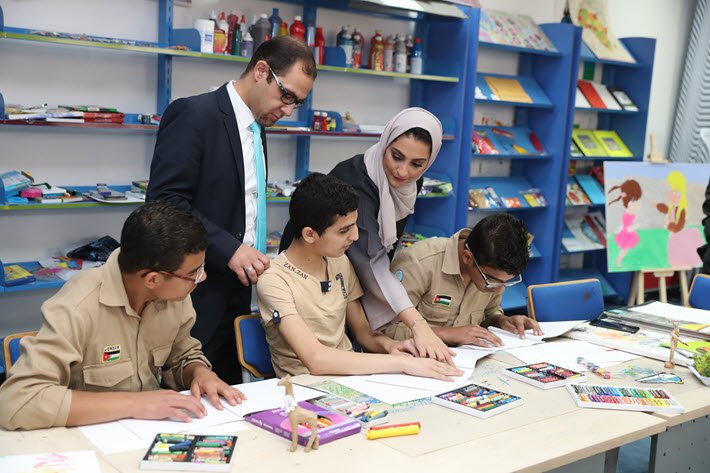