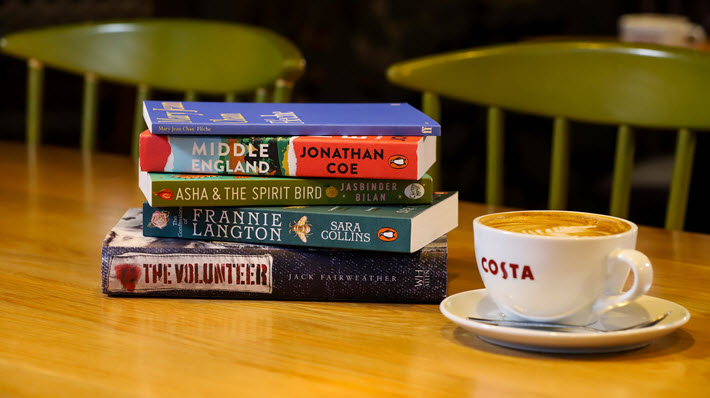 Three of the Five Awards Go to Debuts

This evening in London (January 6), one of the United Kingdom’s key annual prize programs, the Costa Book Awards, has named its 2019 category winners. The authors and their titles were announced on BBC Radio 4’s Front Row.

This is the 48th year of operation for the awards, which were established in 1971 by Whitbread. The coffee company Costa became the program’s sponsor in 2006.

As Publishing Perspectives readers will remember, the Costa is open solely to authors resident in the UK and Ireland. It recognizes works published in the last year in five categories:

The main Costa Book Award is chosen from this group of five. That overall winner is to be announced on January 28 at Quaglino’s in central London in a ceremony hosted, as is often the case in UK awards programs, by a broadcaster, Penny Smith. The winner of the overall prize wins an additional £30,000 (US$39,502).

Described as a gothic romance about a relationship between a Jamaican maid and her French mistress in 19th century London, this book is by Kingston-born Collins, who qualified as a barrister in 1995. Her work in law reportedly has emphasized human rights advocacy in relation to the rights of women, children, and LGBT people throughout the Caribbean. She also has established a free legal advice service for victims of domestic violence.

Collins is one of three debut authors to win a category award this year. Jurors in this category were Clare Macintosh, Will Smith, and Mahsuda Snaith.

The shortlist in the first novel award also included:

Coe’s look at England in modern change—”a nation in crisis,” as one review has termed it—brings humor to its Brexitian readership in looks at several contemporary relationships. Coe is the author of 13 novels including The House of Sleep and The Rotters’ Club. Jurors in the novel category were John Boyne, Francesca Brown, and Sarah Turner.

The other shortlisted authors in this category were:

As described by the publisher, Fairweather—a war correspondent who was embedded with British troops during the 2003 invasion of Iraq—writes here about the 1940 mission given to an underground operative named Witold Pilecki to uncover the fate of thousands of people being interned at a new concentration camp after the Nazi occupation of Poland.

Fairweather is the author of A War of Choice and The Good War, and holds a British Press Award. Jurors in this category were Suzannah Lipscomb, James Marriott, and Will Rycroft.

The other shortlisted authors in biography were:

Chan edits oxford Poetry and lectures in creative writing at Oxford Brooks University in London. As a Ledbury poetry critic, she has written reviews for Guardian Review, The Poetry Review and Poetry London. In 2017, she won the Postcolonial Studies Association/Journal of Postcolonial Writing Postgraduate Essay Prize.

Flèche, her first book, was listed as one of last year’s best books of the year at The Guardian. Jurors in this category were Kate Clanchy, Jade Cuttle, and Rohand Silva.

The shortlist in poetry also included:

In Bilan’s story, young Asha is guided by a “majestic bird” on her journey to find her father in the city and save her home from a money lender. The author, born near the Himalayas, began studying at Bath Spa University in 2017 and won a publishing contract with Chicken House in a contest.

Her book is the third of the three debuts among the Costa category winners. Jurors in this category were Charlotte Eyre, Bali Rai, and Danny van Emden.

Also shortlisted in children’s books were: