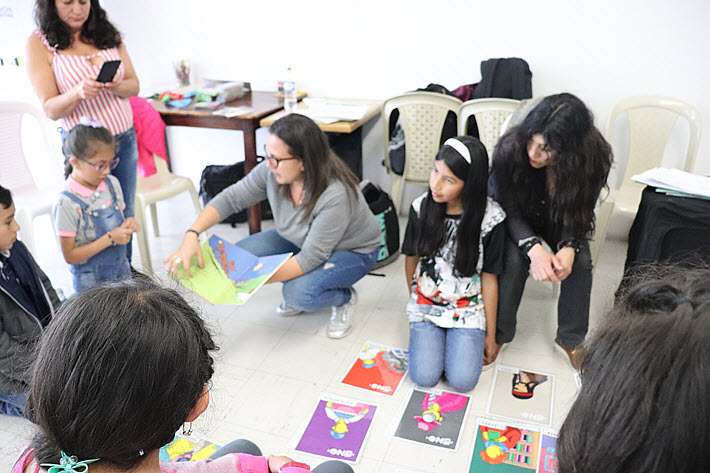 Intended to raise awareness of book production and the talents involved, Colombia’s publishers and the Bogotá book fair are educating consumers in hopes of curbing piracy.

Editor’s note: Last week, we reported on the Italian book publishers’ efforts—in league with their newspaper-publishing colleagues—to engage the national government in a battle against extensive piracy that accounts for almost a quarter of the market’s sales. In Colombia, a new anti-piracy effort tries to put a face to the publishing people who are hurt by piracy. —Porter Anderson

‘Nobody Told Us Who a Proofreader Was’

Colombia’s publishers are working to educate consumers about the problems of book piracy.

The campaign features a series of cards festooned with colorful comics-style illustrations to introduce who is hurt by book piracy: from an author and/or illustrator to a graphic designer, translator, distributor, and bookseller. The program is being provided to schools as an aid in training youngsters about the damage they cause if they buy pirated literature.

No a la piratería—”no to piracy”—is the message of the cards. And to get that point across, the Colombian Book Chamber, called Camlibro, has worked with the Bogotá International Book Fair to design and deploy the new program.

“We want people to value the book production chain and the people involved in that chain,” says Adriana Ángel who is the communications manager for the fair and the publishers’ organization. She’s the player who has led the development of the campaign.

“For many years,” Ángel tells Publishing Perspectives, “Camlibro has been taking action against book piracy in various cities across Colombia. But we wanted to launch an educational campaign and teach book buyers about who’s behind the production of a book.”

‘Say No to Piracy’ 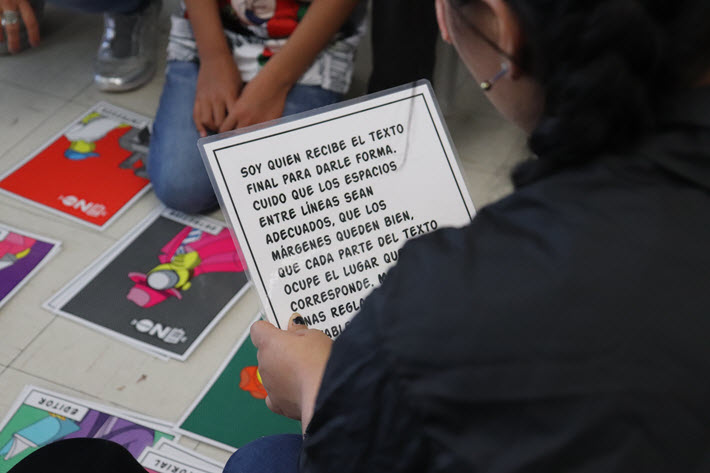 The campaign began with a marketing effort in various social media, followed by a presence at Colombia’s 17 regional book fairs.

“For the reader,” Ángel says, “authors are the only visible faces in the supply chain. Authors are the ones who move a reader’s emotions, and therefore it’s important to highlight the fact that they need to be protected from piracy.

“We want future generations to say ‘no’ to piracy. We want them to be more aware of who’s involved in the production of a book, something that many of us didn’t realize when we were younger. Nobody told us who a proofreader was, or what a publisher or a translator does, and we’ve therefore held workshops in cities across the country with schoolchildren to explain to them how a book is produced.”

Universities are participating, she says, by including the price of students’ book purchases in annual tuition fees, with students then given a code they use to access their books, which it’s hoped will limit the likelihood of their buying pirated editions.

Three of the educational cards in Colombia’s anti-piracy campaign describe for students and other readers the roles of the author, illustrator, and editor

Almost half of that, the publishers say, corresponds to university textbooks and technical titles. Another quarter of it is lost in fiction, nonfiction, and poetry. The other quarter of the losses occurs in textbooks.

In media messaging, Camlibro’s president Enrique González Villa has said that piracy is on the increase despite earlier efforts to slow it. Those previous tactics included a 2007 “zero tolerance” policy for schools on pirated books and photocopies.

Colombia’s publishers are asking for engagement with the campaign among colleagues in Argentina, Ecuador, Mexico, and Peru, reflecting the broad reach of the piracy problem in parts of Latin America. 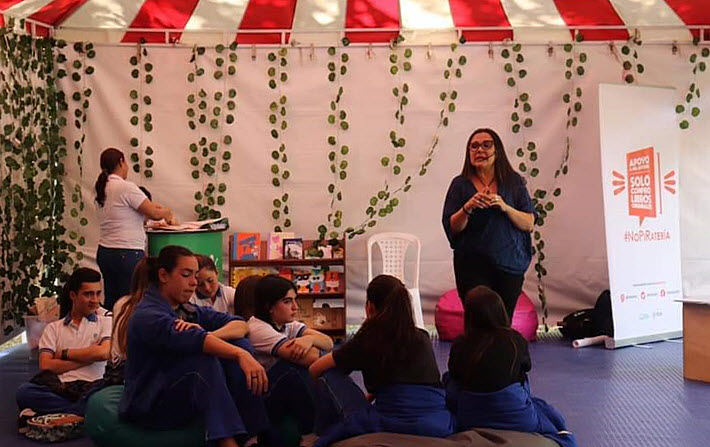 Adriana Ángel works with students in a presentation of the new anti-piracy program in Colombia. Image: Camlibro

Book piracy is reportedly most acute in Mexico, where two out of every 10 books sold are pirated according to the country’s Center for Protection and Promotion of Copyright, a nonprofit “collective management society” (CeMPro), aligned with the International Federation of Reproduction Rights Organizations, with which Publishing Perspectives readers are familiar. 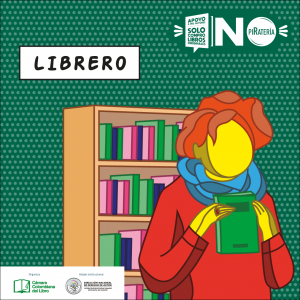 In Mexico City, as in the region’s other capitals, pirated editions easily can be found at makeshift book stalls in parks, shopping streets, and roadway intersections.

And in Peru, book piracy has been eloquently chronicled by local author and journalist Daniel Alarcón in Granta in 2010. In his essay “Life Among the Pirates,” he wrote, “Being pirated is the Peruvian equivalent of making the bestseller list.”

Counterfeit books printed in Lima find their way onto the streets of other Latin American capitals including Quito, La Paz, and Buenos Aires, according to Alarcón. Peru’s publishers association has stressed the need to track and down and eliminate piracy, but concerted enforcement has been hard to come by, as is the case in many parts of the world. 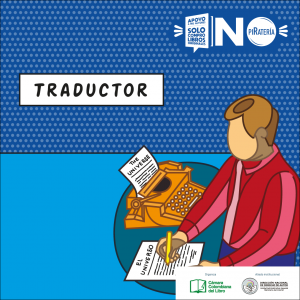 Last year, Peru’s National Institute for the Defense of Free Competition and the Protection of Intellectual Property, called Indecopi, launched a competition in which citizens made short films meant to discourage buying pirated books.

The new campaign’s Ángel points out that Colombia doesn’t have a fixed price for books, and with many titles being imported, she says, the average price of a new book can be beyond the reach of low-income families, one factor driving piracy among consumers. Colombia ‘s books are, however, sold free of value-added tax (VAT).

The new campaign is accompanied by a video. It’s shown in schools and it has English subtitles so it can be used outside Spanish-language contexts.

More of Publishing Perspectives’ coverage of the Colombian market is here. And more from us on international issues in piracy is here while more on copyright is here.