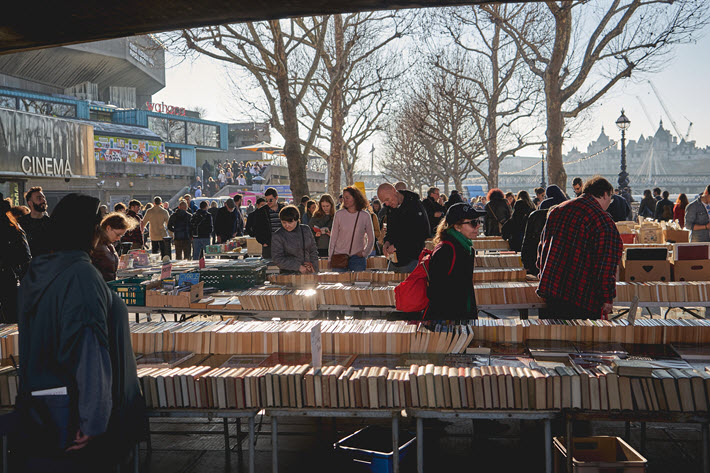 Lee Child, author of the Jack Reacher novels, is among the jurors for the 2020 Booker Prize for Fiction, which will issue its longlist in July.

The 2020 Winner Will Be Named in October

As the international publishing awards programs go into process for the 2020 cycle, the UK’s Booker Prize has released in London this morning (January 7) its jury lineup for this year’s main award.

The marquee name on this year’s list is the British-born, New York-based author Lee Child, whose Jack Reacher series of action-adventure novels reportedly has been translated into 40 languages and has sold at least 100 million copies.

The jury is to be chaired by critic and former publisher Margaret Busby. She and Child are to be joined on the panel by critic and author Sameer Rahim, broadcaster and writer Lemn Sissay, and translator and classicist Emily Wilson.

The ‘Booker Dozen’ longlist of either 12 or 13 books is scheduled to be named in July with a shortlist of six books to follow in September. The winner of the £50,000 (US$65,759) prize  winner is slated to be announced on October 27 at London’s Guildhall.

In this instance, the focus is on the Booker Prize for Fiction. Publishing Perspectives, with our emphasis on the world publishing industry, also closely covers the International Booker Prize for translated literature, of course, which is handled by a separate jury.

In comments on today’s jury announcement, the Booker Foundation’s literary director Gaby Wood is quoted, saying, “Judging the Booker Prize is a collective act of investigation and understanding: seeking the best in new fiction and being receptive to its many possibilities.

“This year’s five judges are, in engagingly different ways, expert readers of the world. Their powers of perception have broken barriers in their respective fields, and I’m looking forward to knowing what their minds will find when they join forces.”

The Ghana-born Busby, as chair, is also quoted, saying, “For more than half-a-century the Booker Prize has saluted brilliant and thought-provoking writing. I’m honored and delighted by this challenging opportunity to contribute to the judging process alongside such a great panel.”

Busby became the first black woman publisher in Britain in 1967, when we co-founded Allison and Busby. In an interesting coincidence, she rented her flat in Notting Hill to Ben Okri in the 1980s. He wrote his first novel there; The Famished Road, which went on the win the Booker Prize in 1991.

Child, born in Coventry, spent 18 years in UK television production before starting his writing career at age 40. His production company at the time was behind Brideshead Revisited, The Jewel in the Crown, and other leading titles.

British and Ethiopian writer Lemn Sissay is chancellor of the University of Manchester, and in June was named winner of the 2019 PEN Pinter prize from English PEN, an honor announced last June.

Rahim is arts and books editor with Prospect magazine and won a William Hazlitt Prize in 2013 for an essay on the historical origins of Islam. As a literary journalist, he’s also worked at the Daily Telegraph and the London Review of Books.

And Wilson may be best known for her 2017 translation of Homer’s The Odyssey from Norton. Last year, she was a recipient of a MacArthur Fellowship, and she’s working on a translation of the The Iliad. Wilson was honorary chair of the 2019 Words Without Borders gala in New York City in October.

Sales Impact of the 2019 ‘Half-Booker’ Split

As it likes to do when making announcements, the Booker Foundation has provided some details of the sales impact of its last award.

Without disparaging either book or author–and although both writers were gracious about the unorthodox outcome–many in the industry were exasperated with the split, not least because Canada’s Atwood is already among the most lauded authors working in English today and became the fourth author to win the Booker twice, her The Blind Assassin having won in 2000. Atwood also had been shortlisted for four other books previously: The Handmaid’s Tale (1986), Cat’s Eye (1989), Alias Grace (1996) and Oryx and Crake (2003).

Evaristo became the first black woman to win the Booker, and the Florence jury had trampled a 1993 regulation meant to prevent exactly such a split prize.

In its media messaging today, the foundation reports that in the week following the announcement of the rogue split prize, sales of The Testaments rose from 11,955 to 13,400, and sales of Girl, Woman, Other sold 5,980 copies, which was “more than double its lifetime sales up to that point and a 1,340-percent increase” over the previous week. What we’ll never know, of course, is how either of these works might have fared in the marketplace if it had been named the sole winner, as the rules had required.

In the United States, Evaristo’s publisher Grove Atlantic moved up its release of the book by a month and boosted the initial run to 50,000 from an originally planned 10,000. Translation rights for Evaristo’s work now are reported to have sold into 21 languages and/or territories, and its television rights have been sold.

Background on the Prize

As we start a new year, we have a chance to look at some of the basic details about the Booker, which stands as the leading literary award program in the English language.

Early in 2019, an American foundation, Crankstart, was named the new primary sponsor of the Booker prizes, as the Man Group concluded its 18-year sponsorship of the program. The Crankstart arrangement is for an initial five years with the option to renew for another five years. The current first five-year term began with June of last year.

Following something of a current trend away from sponsor-named awards, the program, under its new funding arrangement, has opted not to attach the Crankstart name to its branding, and thus its honors are referred to now as simply the Booker Prize for Fiction and the International Booker Prize. The Booker Group, itself, of course, is a sponsor–a British food wholesaler operating through more than 100,000 retailers.

UK and Irish publishers are eligible to submit works of long-form fiction written in the English language and published in the UK between October 1 of last year and September 30  for the current cycle. The number of books a publisher can submit depends on that publisher’s inclusion in longlists over the previous five years in this formula:

Jurors  also are required to “call in” no fewer than eight and no more than 12 of titles proposed by editors. The judges are also permitted to call in other books published within the requisite dates, even if the book has not been submitted through any other route.

For podcast enthusiasts, the Booker program has a series of programs here.