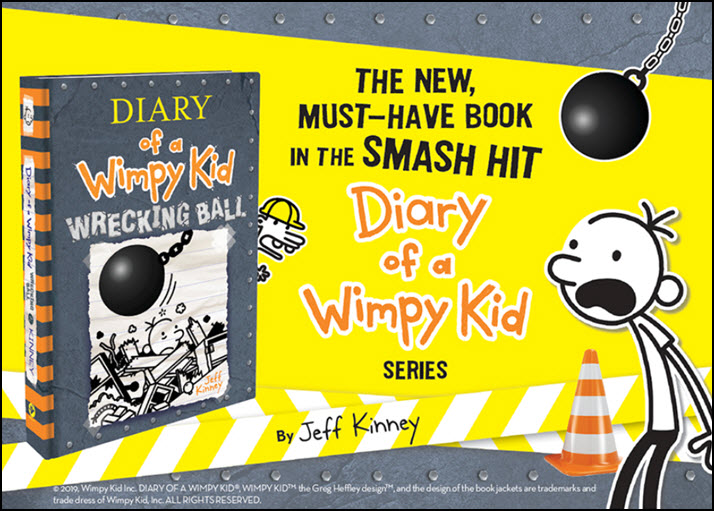 In the US, children’s books saw an increase of more than 20 percent in October, while higher education course materials are down almost 70 percent.

A big jump of 20.9 percent to US$317.7 million in the US children’s and young adult books sector pushes the Association of American Publishers‘ (AAP) new StatShot report for October to cite a 3.6-percent rise in the industry, year over year.

At Publishers Weekly, Jim Milliot is attributing this to “the performance of Wrecking Ball“—Jeff Kinney’s 14th book in his world-famous Diary of a Wimpy Kid series from Abrams. Kinney’s show of force, Milliot writes, “helped lift sales of hardcovers, where sales rose 29.3 percent over October 2018. Sales of paperbacks increased 21.7 percent. For the first 10 months of 2019, sales in the children/young adult segment were up 9.9 percent over the comparable period of 2018.”

By contrast, adult books made a 3.7-percent retreat in October, year over year, and it’s in mass market paperbacks that the market saw its most precipitous dive, the format dropping 37.3 percent, year over year.

Overall publisher revenue in October, the AAP’s report tells us, came in at $1.13 billion, which is a small step back (0.8 percent) from the previous October’s $1.14 billion.

It’s good to remember that the initial iterations of StatShot reports can be revised over time. And, as usual, the data reflects reported revenue for all tracked categories, which are:

In terms of format, the association offers several newly devised graphics, and reports, “Physical paper formats continued dominate the trade category, accounting for $751.0 million, or 80.0 percent of the category’s $938.7 million in revenue for the month. 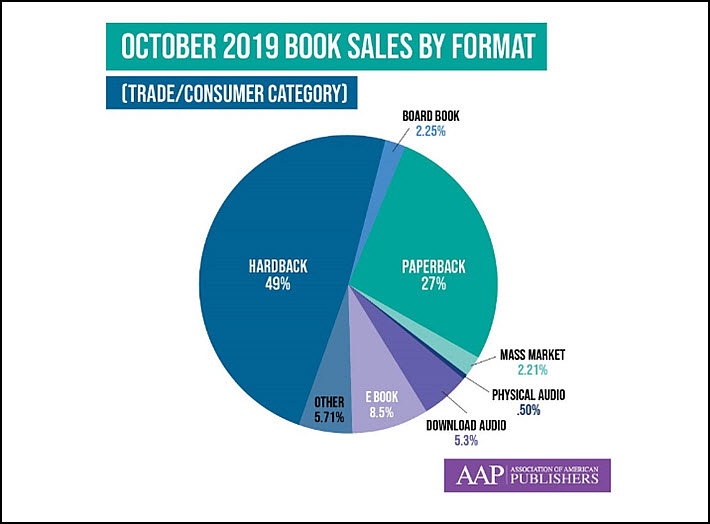 Although downloaded audio increased 15.1 percent to $49.million for October year over year—and has had a remarkable history of “at least some growth every month since AAP began tracking it in 2012″—the above chart from the AAP shows the format in October was accounting for only 5.3 percent of the overall market. Physical audio, of course, shows up at a scant 0.5 percent of the whole.

This isn’t a fact that should in any way diminish the industry’s pleasure and interest in audio’s rise but it can help to keep the contextual point in place. For all the energy behind growth in the downloaded format and all the gemütlich celebration of its strides and quality output, audio still is limited in its reach by comparison to hardcovers’ dominance at 49 percent, paperbacks’ stance at 27 percent, and even ebooks’ 8.5 percent. And surrounded not only by podcasts and other audio offerings but also by the more visually dependent attractions of downloaded digital work, it’s not illogical to keep a sharp eye on the growth curve over time. 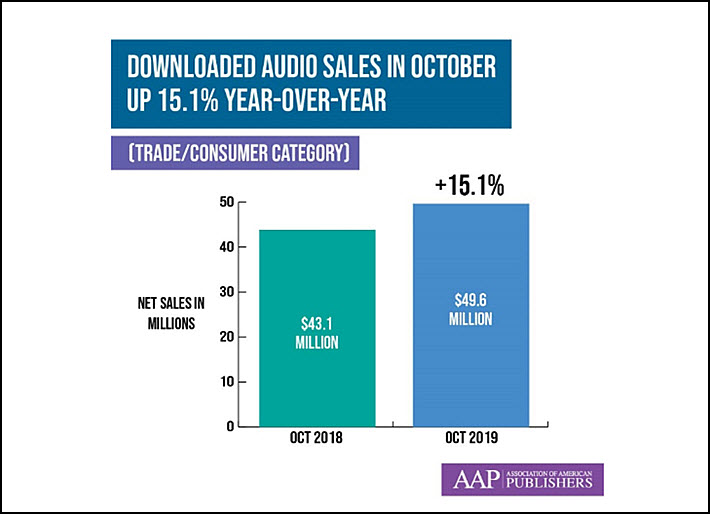 Ebooks, in fact, experienced another decline, this time of 8.9 percent to $80 million by comparison to October 2018.

October 2019: US Total Trade Net Revenue by Format (in millions)

Charting the formats numbers as we normally do, we get the following:

US Publisher Overall Revenues in Categories

College course material publishers might love a Jeff Kinney of their own. There’s a particularly steep decline in higher-educational content, which was “down 67.9 percent year over year, coming [in] at $24.1 million,” in the association’s discussion.

“Year-to-date revenue in this category,” the staff writes, “is down 12.7 percent to $2.5 billion, attributable in part to an ongoing decline in spending on course materials”—as reported by Publishing Perspectives here—”as students take advantage of new, cost-effective options that publishers have made available.” Those options include “rental options for both print and digital materials, loose-leaf versions, and creative new distribution models such as Inclusive Access and subscription services.

In trade category revenues for October’s report, the AAP’s media messaging points out that children’s and YA books in physical formats “posted strong growth, with revenues from hardback books increasing by 29.3 percent to $148.3 million compared to October 2018, and revenues from paperback books growing 21.7 percent vs. the same month last year.”

In addition, university presses are indicated to have encountered a 15-percent drop in October, year over year.

October 2019: Overall US Publisher Revenue in Categories  (in millions)