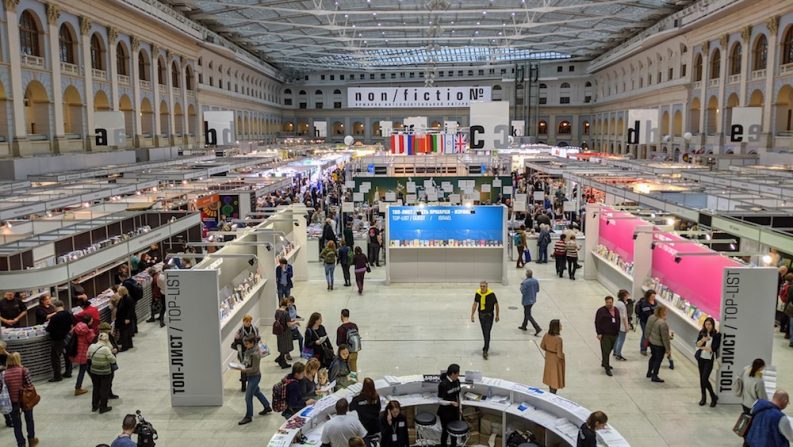 A new location for the Non/Fiction Book Fair in Moscow brings together higher book sales, international contacts, and a look at some of 2019’s top Russian books. 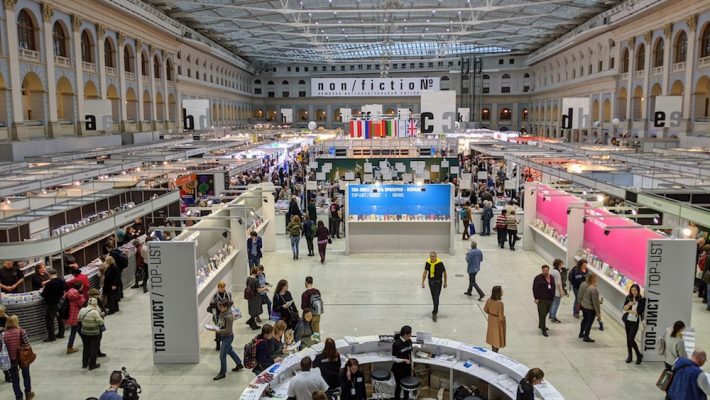 A New Location for the Fair

This month, the 21st Non/Fiction Book Fair in Moscow opened its doors in a new location—Gostiny Dvor—bringing its exhibitors and author events closer to the city center for the five-day fair (December 5 to 9).

The new location, close to Red Square and other popular gathering places in Moscow, proved to be a success for this public-facing fair at which Russian publishers promote their latest titles, sell books, and generally engage with readers.

Aisles of the fair buzzed with book buyers, and though most publishers were kept busy by the crowds, many also made time to meet with their industry colleagues and make new connections among the foreign publishers at the fair. The atmosphere was one of friendly enthusiasm.

Book Sales at the Fair 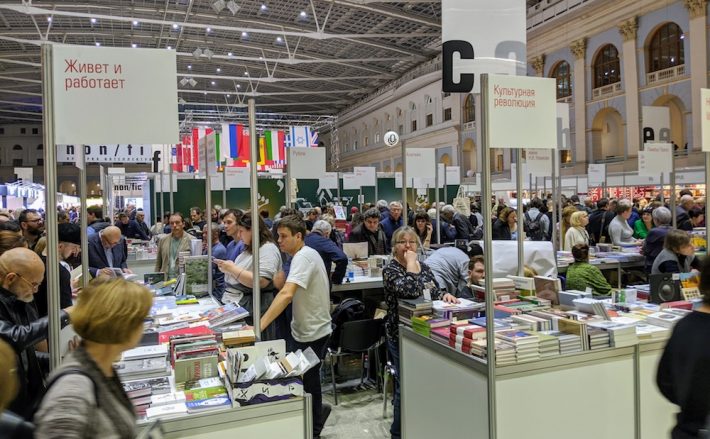 Several Russian publishers told Publishing Perspectives that while the income from selling books during the fair more or less covers their exhibition costs, the overall visibility and business meetings makes Non/Fiction a must-attend event for them.

The fair’s director, Maria Fedotova, told Publishing Perspectives that book sales during the show are very impactful for small and independent publishers that don’t always get enough visibility in bookstores.

Fedotova said it can be difficult to start a business in Russia, and she wants to help new publishers get their books into the hands of readers.

Ekaterina Kozhanova, director of strategic communications for Eksmo-AST, told Publishing Perspectives that the group’s book sales during the Non/Fiction fair this year were stronger than last year. She attributed this rise, in part, to the fair’s new location, which she said “caused a new wave of reader interest.”

Eksmo-AST, Russia’s largest trade publishing group, sold its books during the fair using the infrastructure of its online bookstore, book24.ru. Looking at the sales data from the platform, Kozhanova shared with Publishing Perspectives lists of the group’s most popular authors and top-selling titles at this year’s Non/Fiction fair.

Eksmo-AST’s Top 10 most popular authors of the fair:

From left are On the Body of the Soul by Lyudmila Ulitskaya; The House of Government by Yuri Slezkine; History of the Russian State: Alexander the Blessed and Nicholas the Unforgettable by Boris Akunin; and Napoleon’s Train, Book 3: Angel Horn by Dina Rubina

Among these 10 authors, Kozhanova said that four stood out in particular.

Lyudmila Ulitskaya, widely known in Russia and internationally, was at the fair to present her newest book, a collection of short stories called On the Body of the Soul (AST). Ulitskaya’s work has been translated into many languages and recognized with, among others, the Russian Booker Award and Austrian State Prize for European Literature. [Editor’s note: In a September 23 statement, organizers of the Russian Booker Award announced with regret that they were terminating the program after two years of unsuccessful efforts to obtain funding.]

Yuri Slezkine’s true story The House of Government has been a bestseller since March, said Kozhanova, and interest remains high for this chronicle on the lives of Soviet officials living in an  apartment building in Moscow.

Prolific and popular Russian writer Boris Akunin was among the top-selling authors with the latest volume in his nonfiction series documenting the history of Russia, Alexander the Blessed and Nicholas the Unforgettable.

And the third book in bestselling author Dina Rubina’s Napoleon’s Train trilogy called Angel Horn landed at spot No. 3 on the group’s list of top-selling titles during the fair.

International Publishers at the Non/Fiction Fair 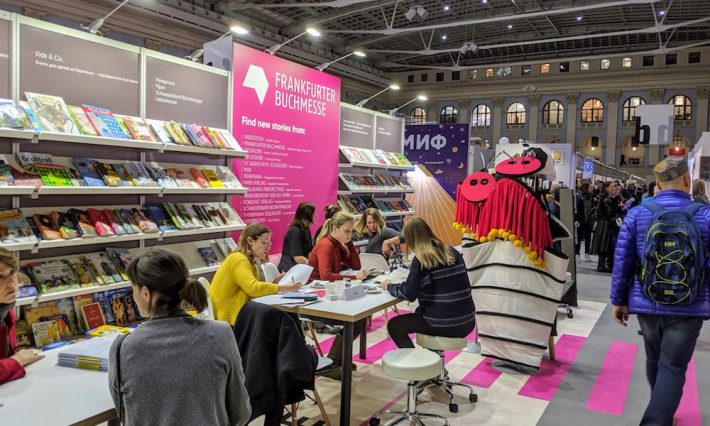 The German collective stand at the 2019 Non/Fiction Book Fair in Moscow, organized by the Frankfurter Buchmesse and BIZ Moskau. Image: Hannah Johnson

While showcasing new titles to the public and connecting publishers with readers are key parts of the fair, Non/Fiction is increasingly seen as a fair where international publishers, agents, and others can make connections in Russia.

In addition to sizable national stands from France, Italy, Poland, and several other countries, the German collective stand grew this year, hosting 10 publishers chosen from a growing number of applications.

“The rights potential both for our kids’ titles and adult titles is high on the Russian market, and the fair allowed me to validate that fact as well as meet very relevant publishers for our lists,” she said. 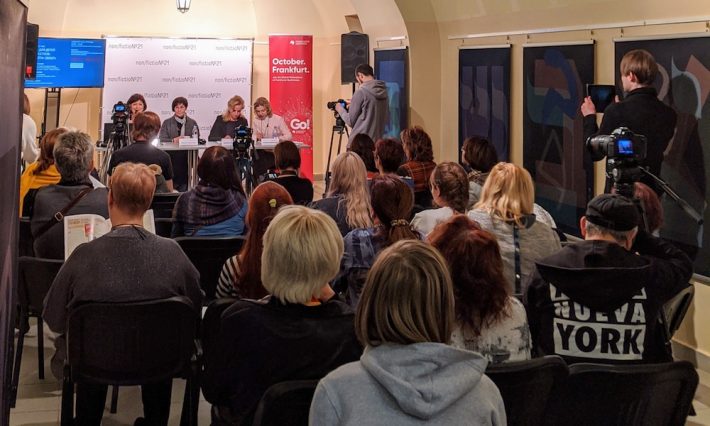 As part of the program at the fair, where reader engagement is a priority, BIZ Moscau—the Frankfurter Buchmesse’s Moscow office—organized a panel discussion on the internationally ubiquitous challenge of encouraging children to read more books.

As an industry, Zorina said, creating readers of the future is an issue we all need to address. One strategy that both Paxmann and Aromstam said is effective is reading books aloud to children.

Whether at home with family or in the classroom, Aromstam said reading aloud creates positive experiences with books and stories. In Russia, she said, reading-aloud competitions have grown in popularity, along with audiobook sales. Hearing books and the more complex language used in writing—as opposed to spoken language—helps kids, she said, become familiar with more complicated language.

The panelists didn’t agree, however, on whether digital content and formats would encourage children to read more books. Aromstam said that interactive and multimedia elements had potential to engage reluctant readers, and to make reading easier and fun.

Paxmann said that several studies have shown that readers comprehend material differently on paper versus in digital formats.

More from Publishing Perspectives on Moscow’s Non/Fiction Book Fair is here, and more on the Russian market is here. More on internaitonal publishing rights is here.