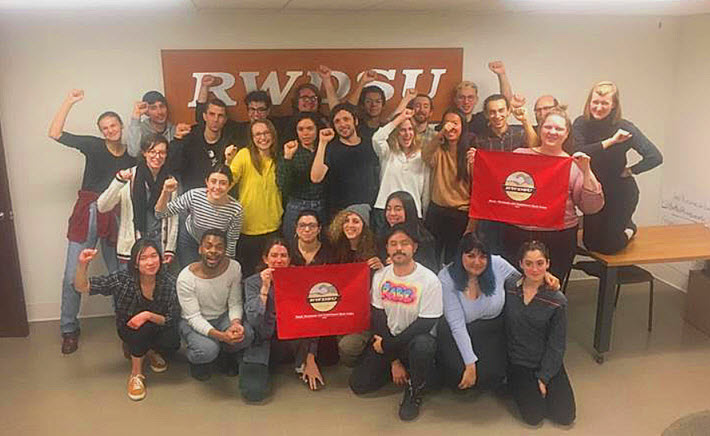 With a five-point set of goals for working conditions, McNally Jackson workers in three bookstores and two stationery stores vote to unionize.

On Thursday (December 12) in the United States, the Retail, Wholesale, and Department Store Union (RWDSU) announced that some 90 workers of five stores in New York City have voted to become union members. Three of the retail sites are bookstores, two are stationery shops.

The McNally Jackson Independent Booksellers stores are located in Manhattan on Prince Street and Fulton Street, and in Brooklyn on North 4th Street, and the company is effectively a small and independent group of chain stores. The company also has two stationery stores called Goods for the Study in Manhattan, one on Mulberry Street, and one on West 8th Street.

The union the stores’ workers have voted to join is a member of two international trade unions, the International Union of Food, Agricultural, Hotel, Restaurant, Catering, Tobacco, and Allied Workers’ Association (IUF) and the Union Network International (UNI).

In the United States, the RWDSU says, it represents some 100,000 members, with as many as 45,000 in New York State. It’s an affiliate of the United Food and Commercial Workers Union (UFCW).

The RWDSU will now represent the workers in contract negotiations with the McNally Jackson management. The workers involved in the action handle sales, stocking, information services, and events.

A list of workplace issues provided by the union in its media messaging includes the following, apparently composed by the workers:

The union, in its announcement, has included a comment from McNally Jackson workers Kathryn Harper, who works in the Brooklyn bookstore. Harper is quoted, saying, “I’m proud to say I’m now part of the RWDSU. Workers across all five stores face issues of harassment at work, favoritism, and lack of dignity and respect.

“By coming together, we are stronger, and I am confident we can shape our workplace into a place we all want to come to work each day. It’s about time McNally Jackson workers had a real seat at the table with the company and we’re ready to get to work on our first contract,”

By comparison to other world markets’ labor union profiles, the United States is rated by the Organization for Economic Co-operation and Development (OECD) as having had in 2016 the fifth lowest trade union density of the organization’s 36 member nations.

Industry statistics indicate that between 1983 and 2016, the percentage of American workers belonging to a union dropped to 10.7 percent from 20.1 percent.

In a Tuesday report (December 10) at Patch, Sydney Pereira writes that the McNally Jackson workers, in voting for union membership, “join a slew of other independent bookstores that have also organized, such as New York City’s iconic Strand Bookstore, Portland’s Powell’s Books and Austin’s Book People, according to the Department for Professional Employees. Nearby McNally Jackson’s headquarters, museum workers at the Tenement Museum and the New Museum voted to unionize this year.”

Per information from the National Labor Relations Board included in the Patch report, the McNally Jackson workers initially filed a petition to organize on November 19.

The McNally Jackson management is represented, per the listing from the National Labor Relations Board, by Daniel Schudroff of Jackson Lewis.

More from Publishing Perspectives on bookselling is here, and more on international retail is here.