‘The Aral Sea did not dry up by itself. It was killed,’ says Rollan Seisenbayev, whose ‘The Dead Wander in the Desert’ has been longlisted for a PEN America award in translation.

The rusted hulks of many fishing vessels rest on what now is a desert floor that was the Aral Sea. Image – iStockphoto: Homo Cosmicos

PEN America has released its longlisted titles for 2020, and Rollan Seisenbayev’s ‘ The Dead Wander in the Desert’ is on the translation awards list.

As the COP25 Talks Falter

At The New York Times, Somini Sengupta reported on Sunday (December 15), “In what was widely denounced as one of the worst outcomes in a quarter-century of climate negotiations, United Nations talks ended early Sunday morning with the United States and other big polluters blocking even a nonbinding measure that would have encouraged countries to adopt more ambitious targets for reducing greenhouse gas emissions next year.” 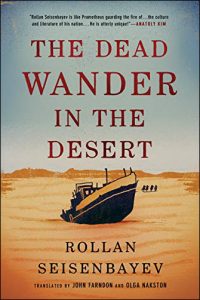 The COP25 Chile-Madrid round of talks, per Frank Jordans and Aritz Parra of the Associated Press, “ended Sunday with a slim compromise that sparked widespread disappointment, after major polluters resisted calls for ramping up efforts to keep global warming at bay and negotiators postponed debate about rules for international carbon markets for another year.”

And as delegates were working long past the planned Friday close of the negotiations (December 13), PEN America released its 2020 slate of literary awards longlists. You’ll find them here.

On the longlist for the PEN Translation Prize, Publishing Perspectives readers may recognize The Dead Wander in the Desert, Rollan Seisenbayev’s darkening novel based on the destruction of Kazakhstan’s and Uzbekistan’s Aral Sea. Diversion by Soviet engineers of the rivers that fed what was once the world’s fourth largest lake caused a 30-year collapse of the Aral’s ecosystem and the health and economies of communities that had depended on it.

As Seisenbayev writes in the front matter of his book, “With sorrow in my soul, I dedicate this book to the fishermen of the Aral, the people of Semipalatinsk, and the victims of the nuclear insanity and ecological disasters of the 20 century, whose voices sound the alarm, whose souls groan over the planet and plead for sense in the living.”

The English translation of The Dead Wander in the Desert was published by Amazon Crossing this year and features the translation work of Olga Nakston and John Farndon, himself a seasoned ecological writer, the author of the Atlas of Oceans: An Ecological Survey of Underwater Life (Yale University Press, 2011).

Page-Fort: ‘No Choice But To Fight’ 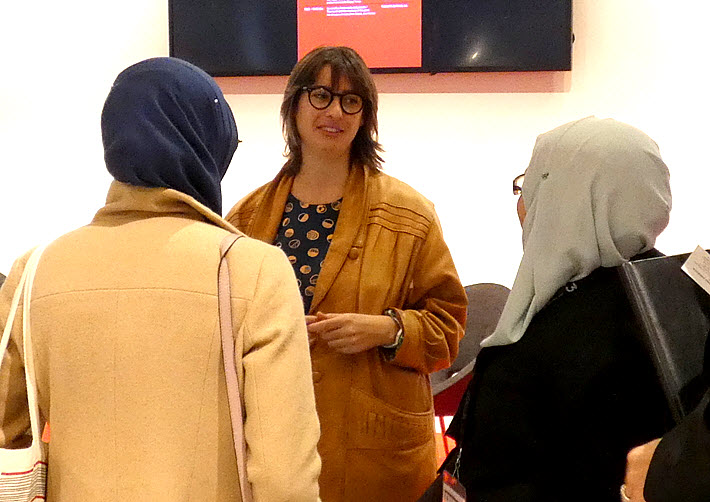 On October 16, Seisenbayev joined us for “Publishing and the Climate Crisis,” one of our Publishing Perspectives Talks at Frankfurter Buchmesse, as did Amazon Crossing editorial director Gabriella Page-Fort and translator John Farndon.

Page-Fort pointed out that rather than adding to the nonfiction material on the tragedy of the Aral Sea, Seisenbayev—who advised Kazakh president Nursultan Nazsarbayev in the aftermath of the breakup of the Soviet Union—chose to write a novel about a fisherman and his son.

Rollan Seisenbayev writes about “a Don Quixote who’s actually bringing a message, whether they want to hear it or not, to the highest powers. And he’s giving hope.”Gabriella Page-Fort, Amazon Crossing

“For me, Rollan’s The Dead Wander in the Desert,” Page-Fort said, “is a kind of ecological Don Quixote.  You have the sense that the individual is fighting against the monolith of the Soviet Union. He’s one man, devastated because his entire way of life has dissolved. He’s a fisherman and all of his people have been fishermen, and he can’t be a fisherman when the sea is like this,” shrinking and poisoned.

“So he has no choice but to fight. And his battle is against an impossible force that oppresses people without even knowing that there are people.”

Despite the obvious value of dams in many instances, Page-Fort said, “We don’t always think about what comes next. We think only about today.

“This novel was published in 1991. I read it 18 months ago” in Farndon’s English translation, “and I was appalled. How dangerous and how corrupt it is to use our natural resources for economic gain. But we don’t always feel it’s worth the efforts of an individual. What can one person do?

“So for me, this Don Quixote could be tilting at windmills, if you look at it one way. But if you look at it another way, he’s actually bringing a message, whether they want to hear it or not, to the highest powers. And he’s giving hope, not only to  himself and his family but to his entire culture. It’s a battle worth fighting.

“Our way of life is worth at least trying to preserve. And if we can’t preserve it, we should at least be willing to risk our own dignity or our own time or our own effort to make the message heard.

“When you think about translation and how stories travel, you can learn so much by understanding something that’s farther from our own consciousness. To see this story from the flip side—to get this one man’s vision—the passion and unity among our fellow people comes across in fiction in a way that sometimes it can’t in nonfiction.”

Seisenbayev: ‘Say No To World Evil’ 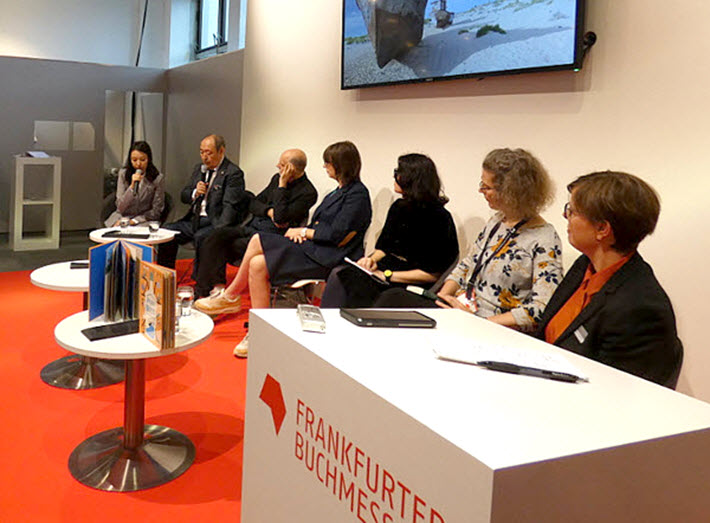 Seisenbayev talks with a massive, deep voice, a basso profundo that seems characteristic of some of the world’s oldest cultures.

During the climate panel at Frankfurt, he read sonorously through a statement he had written for the event to give the panel and audience some of the context on his writing of The Dead Wander in the Desert. Zarina Baimussina served as his interpreter.

Seisenbayev is among the top writers of his market today, the author of The Return of Kazybek, Throne of Satan, and The Day the World Collapsed. The Dead Wander in the Desert is the first of his books to be translated into English. In-country, it has sold more than 1 million copies, and is widely seen as the foundational novel of Kazakhstan.

Here’s an English translation of the impassioned comments Seisenbayev made to the climate program at Frankfurt in October. His reference to the “Genghis Mountains” is to the Khan Khentii range in northeastern Mongolia. The mountain called Burkhan Khaldun is associated with Genghis Khan.

“In 1953, my grandfather took me to the Genghis Mountains, to the homeland of our ancestors. We rode a cart for two days. Grandfather brought two bags of flour to his sister, who with her husband grazed collective farm sheep in the depths of these mountains. It was a difficult post-war time. 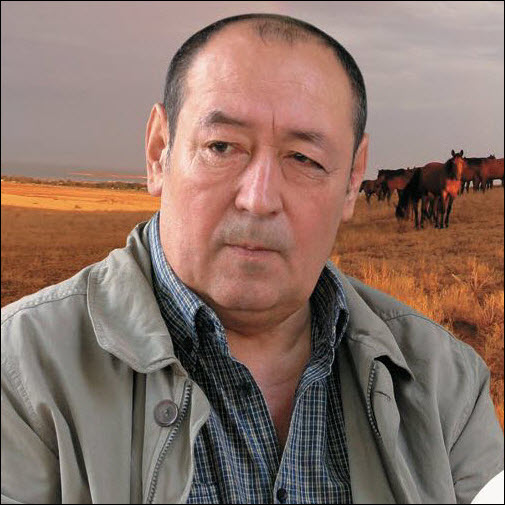 “In the morning, when I woke up, I saw high mountains around me. A brisk mountain river flowed below. Grandfather said to me, “Awake? Come, I will show you our mountains.

“At the top of a mountain, he stopped and silently looked down to where the wide steppe stretched. The sight of steppe’s beauty shocked me. I heard my heartbeat. Grandfather hugged me and said,  ‘This is your homeland. Love and take care of her.’ I, a 7-year-0ld boy, wasn’t yet imbued with the meaning of the word homeland.

“A few days after this, the first explosion of a hydrogen bomb thundered in the Genghis Mountains. The Earth shuddered, stones rolled down from the mountains. On October 11 of this year I turned 73 years old. For all my life I remember the horrors of that rainy morning in 1953.

“As I grew up, I learned that in my homeland, in the steppes—where prisons had never been built—concentration camps had appeared, camps to which men and women, adults and children were sent. I learned that innocent people were imprisoned and kept in psychiatric hospitals. Rarely did anyone come back from those places. It was a tragedy of a huge country called the USSR. I traveled there and wrote the novel Throne of Satan about the Soviet prisons.”

‘The Aral Sea Was Killed’

“In the 1980s, the Aral Sea, began to lose its waters. Fishing vessels remained rusted on the dehydrated shores. Fishermen left their homes.

“I rushed to save the Aral. It was dying cruelly and painfully. Fish choked and died jumping in the salt marshes. I saw the eyes of dying fish. It was the groan of living souls; sea fish and desperate fishermen of the Aral Sea.

“When the achievement of progress is destruction of nature, we live among garbage. In landfills. In the trash.

“The Aral Sea did not dry up by itself. It was killed. In the 21st century, it’s possible to kill entire nations, countries, seas. Ten thousand atomic bombs are waiting in the wings. If we continue to remain silent, then these bombs will speak and theirs will be the last salute over sleeping, silent, chewing, drinking humanity. When good is silent, evil wins. And Satan is roistering. If there’s evil in the world, then we must resist it.

“Finally, one must say no to world evil. This is resistance, and our support is the original human conscience.

“We, Earthlings, need to get up from our knees, stretch out our hands to each other, open each other’s hearts, and unite in order to save our planet.

“I sincerely thank you for your attention. I wish you happiness. We humans must defend the great right to be called Man.” 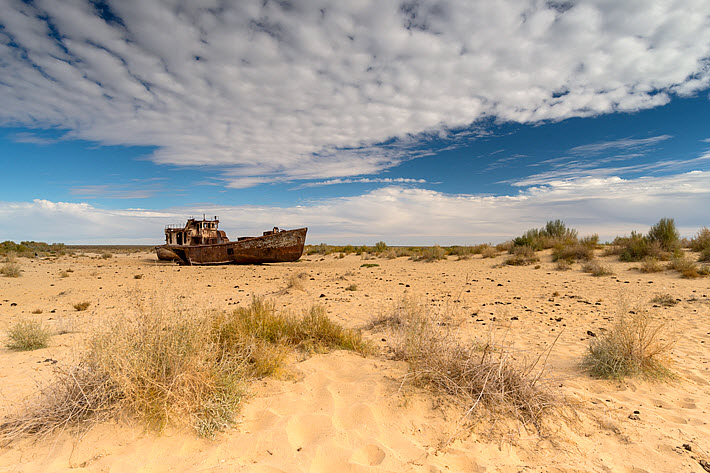 On the site of the former Aral Sea. Image – iStockphoto: Oxico

More from Publishing Perspectives on translation is here, more from us on PEN America is here and on publishing and literary awards is here. More on the Frankfurter Buchmesse is here, and you can review our Show Dailies, which carried news of the fair daily, in our Magazines section here.