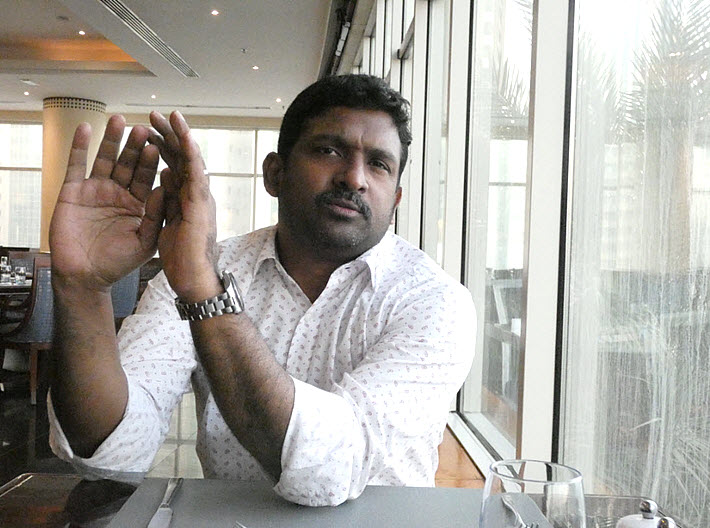 In creating short videos to pitch books to filmmakers, HarperCollins India CEO Ananth Padmanabhan is creating quick films ‘to take stories to audiences who are spending a lot of time watching.’ 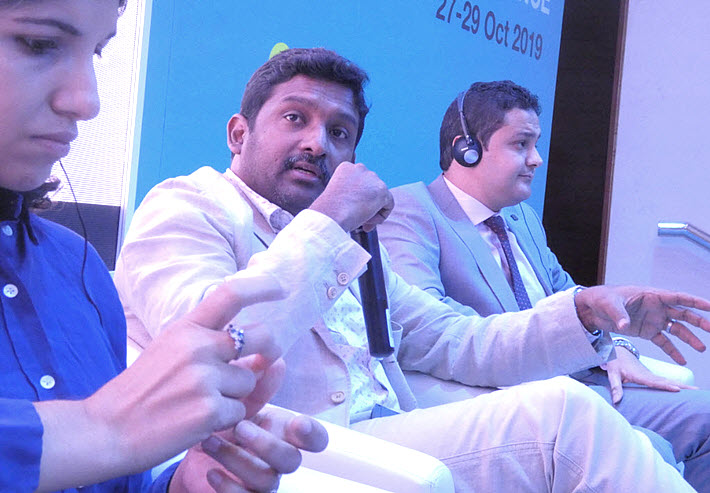 ‘Odes To the Power of Good Storytelling’

In making that announcement, Murray was quoted saying, “As a company, we invest more than US$300 million in new works by authors each year. Now, through this partnership with Elizabeth and Sony Pictures Entertainment, we will expand our investment in writers to include film, TV, and streaming opportunities, creating new possibilities for authors to have their books adapted and developed by the best literary team in history with the full support and capabilities of Sony.”

At the time, Murray’s new first-look arrangement with Gabler was seen primarily as a States-based venture. But during last month’s Publishers Conference at the United Arab Emirates’ Sharjah International Book Fair, a new internationally positioned look at the Big Five publisher’s screen savvy came into view.

“Gone are the days when somebody asks you, ‘What are you reading?'”Ananth Padmanabhan

“We’ve completely changed the quality of the conversations we now have” with producers and film scouts, said HarperCollins India CEO Ananth Padmanabhan, captivating his audience during a panel hosted by Publishing Perspectives and titled “Publishers’ Digital Strategy: New Ways of Storytelling.”

Padmanabhan, in a sense, picked up on what Murray and his team are doing in the States, asking the publishers, literary agents, and rights directors in the theater at Sharjah’s chamber of commerce to open their minds to what he calls “an ode to the power of good storytelling.”

We can offer you the same experience, showing you the short film he showed the audience. And then we’ll update you on the new step he and HarperCollins India have just taken.

With this quick modern fable, which HarperCollins India produced nearly two years ago, Padmanabhan shifted a point of reference for his packed audience in Sharjah. Comfortably watching a book pass between a couple of attractive young actors on a bus in rural India had set them up for a fall.

“Now they ask you, ‘What are you binge-watching?'”Ananth Padmanabhan

We’ll give you no spoilers here, in case you want to go back and watch it now. But in terms of Padmanabhan’s intent, we’ll point out that this little film was released with the title Stories Create Books. Only at the very end doe sit reverse, Books Create Stories.

Hold that two-way idea in your mind now, as we update you to the new release. Padmanabhan wants you, as a publishing player, to try to get a creative exchange in mind for an era in which the “books to film” channel is becoming red hot with potential for the world book industry. He calls it “words to screen,” a better phrase.

‘A Great Story Can Come From Anywhere’ 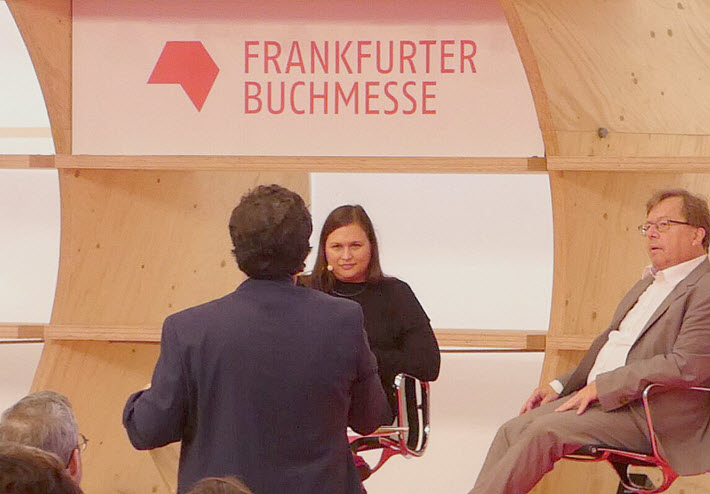 When Kelly Luegenbiehl, chief of Netflix International Originals, gave her CEO Talk appearance at Frankfurter Buchmesse in October, she told us in our interview with her, “A great story can come from anywhere and travel anywhere.” This is close to what Padmanabhan wants both publishing and its consumers, its readers, to grasp.

“We’ve completely changed the quality of the conversations we now have” with producers and film scouts.Ananth Padmanabhan

Not only has he and his team at HarperCollins India made some 20 short videos in the past two years, each designed to pitch a specific book to a filmmaker, but he’s also working at a more macro level to help the industry and its story-consumers ease into a fast-developing framework in which storytelling is the currency of the realm. The format, the vessel, the medium—whether it comes from an publisher’s imprint or a production house—is less important.

A week ago today, on November 24, Padmanabhan released in New Delhi a new HarperCollins India piece, a second concept piece aimed at this high-level view of the change afoot. Again, not referencing a specific book from HarperCollins’ list, this work is more complex, more accomplished, more nuanced than the first one. It already has had 390,071 viewings on YouTube. Publishing Perspectives was provided with an advance screening of the piece.

Parcel: The Film is 8.5 minutes long and travels—by car—across a darkening storyscape with much more authority and texture than the first film. This time, there are credits, and the work of more than 50 people and firms went into making the piece. Set against Rupert Fernandes’ intimate, mournful guitar-led score, the piece asks, When you read a story, do you write one in your mind? Yes? No? Maybe?

“We used crime as our genre,” Padmanabhan says, “given that it’s one of the most watched, most read genres.”

We’ll give you a look at the new film now—again, no spoilers here—then we’ll hear from Padmanabhan on what he and HarperCollins India are doing.

‘The Other Side of the Table Doesn’t Read Books’

Ananth Padmanabhan can tell you what he’s up to in one sentence: “The idea is to take stories to audiences who are spending a lot of time watching a story.”

Two years ago, he says, he and his associates hit on the idea of creating visual pitches for HarperCollins India’s books, both back- and frontlist. He uses those small films to give a producer a glimpse of how a book’s film treatment may play on a screen. Imagine how things might go at the annual Books at Berlinale event in Germany—our reports on it are here—if the event offered the producers and scouts on hand not just agents’ and rights directors’ verbal descriptions of each title up for consideration but also a visual a sense for what key values of a book may offer to a screenwriter and studio.

“If you’re a producer,” Padmanabhan says to Publishing Perspectives, “then I come to you and I say, ‘Okay, I have this fantastic story. If you like this, you’ll like that,’ right? But what we all know is that the other side of the table doesn’t read books. They need an elevator pitch in their language,” which is cinematic, visual.

By learning to produce short visual pitches for books—not unlike his two concept pieces here but putting across the plot points and highlights of a specific story—Padmanabhan says, “We’ve completely changed the quality of the conversations we now have” with producers and film scouts.

“In the beginning, we needed to understand, ‘Who are we meeting? Are we meeting all the right people?’ And the next part was trying to do some part of the imagination for them.

“As publishers, we’ve always done that,” he says. “We sell the vision of the author really well. We go to the chain store, we tell them, ‘This is how you should position this book, this is how you should display it.’ But this is a new medium,” the digitally powered array of film and television, streaming networks, both aligned and over-the-top. ‘We sat down and said, ‘This is what we should do.”

By developing the capacity to produce his short films—book trailers designed not for the reading public for expressly to register the key elements of a story for producers—Padmanabhan  is able to use local video producing talent, open-source music, stock imagery, and produce these visual pitches for a visual industry on which publishing’s fortunes are becoming more and more dependent.

The first of HarperCollins India’s two concept films we’ve embedded in this story, Padmanabhan says, “won a Dadasaheb Phalke Award for direction. He knew then that he was on to something. “The people who saw it,” he says, “then realized, ‘Okay, these people at HarperCollins are really serious.’ They understand the medium. They want to work with us.”

‘These Films Are To Showcase the Books’

Ananth Padmanabhan: ‘These films are to showcase the books. They may not happen at all.’ Image: Porter Anderson

Spend 30 minutes with Padmanabhan and he punctuates the conversation with delighted interjections of, “I want to show you something … hang on …” And these are clips from his short videos on his phone. In fact, before he could release Parcel to us, he eagerly played its titles for it, then stopped the tape before we could catch on to the story: this is an artful and natural salesman of suspense. And he loves what he’s learning to do for books with video.

“We needed to undestand, ‘Who are we meeting? Are we meeting all the right people?’ And the next part was trying to do some part of the imagination for them.” Ananth Padmanabhan

Needless to say, there can be issues, most of them, Padmanabhan says, contractual, maybe with an option fee. “Sometimes you think it’s a great idea and an author or an agent comes along and says, ‘No, I want more money.” But in most cases, the tricky part, he says, is waiting to see what happens to an optioned property.

“These films are to showcase the books. They may not happen at all.” But Padmanabhan is loving this direction for his company.

“When I was being hired by HarperCollins, in my first interview at the US offices, they said to give them a short presentation. ‘Show us what is happening in India.’ In 15 minutes? How could I tell them about India in 15 minutes? So I made a film.”

He’s not a film school graduate. Padmanabhan arrived at HarperCollins in October 2015 by way of the Penguin Publishing Group and Landmark Book Store. He studied at Stanford in publishing, at IIM Ahmedabad in business administration, and at Madras in English.

But he knows, as he says, “the power of good storytelling,” and he knows the world is becoming more visually oriented all the time.

“How can publishing not be part of that?” 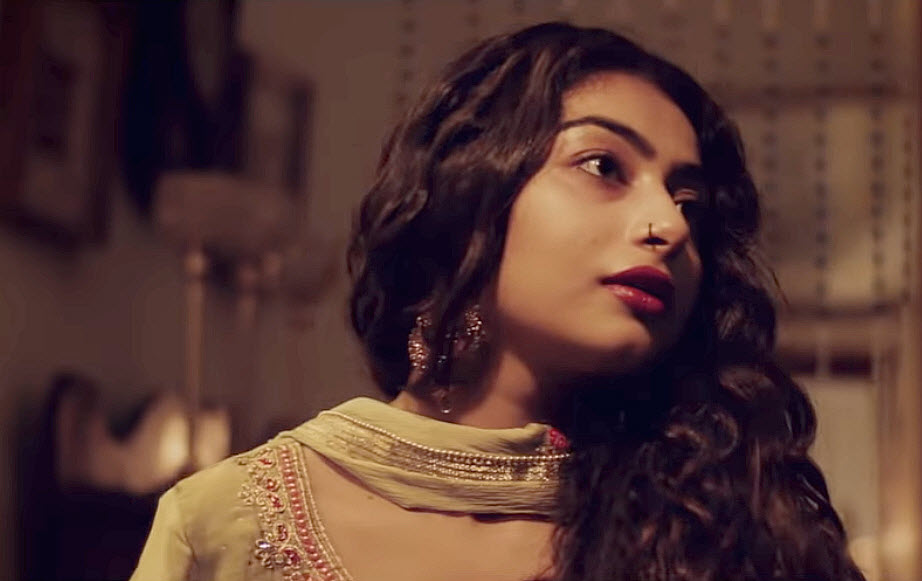 More from Publishing Perspectives on HarperCollins India is here. More from us on the India market is here, and more on the ‘words to screen’ trend in world book publishing today is here.