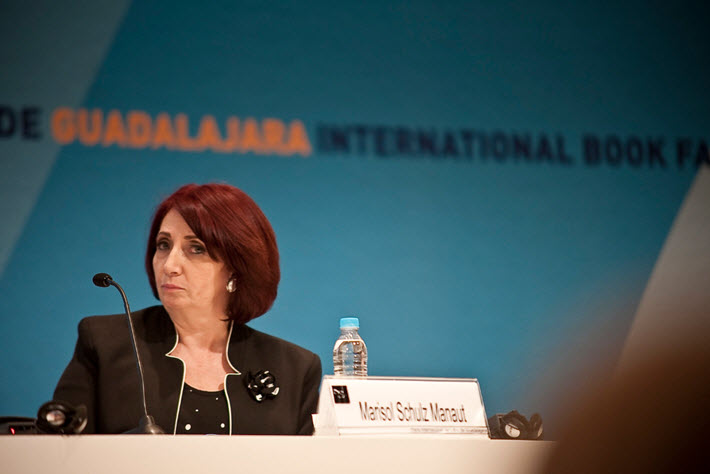 In her seventh year as director-general of Mexico’s Guadalajara International Book Fair, Marisol Schulz keeps a close eye on the world industry for programming cues.

Editor’s note: Last year, the Guadalajara International Book Fair reported that it drew 818,810 attendees along with 2,289 publishers, 328 literary agents, and the participation of 140 companies in its rights center. Publishing professionals, the fair reports, numbered 19,740. —Porter Anderson

‘To Continue to Please People’

This week in its 33rd annual iteration, the Guadalajara International Book Fair runs through Sunday (December 8) under the leadership of director-general Marisol Schulz.

In her seventh year at the helm of the sprawling event—which draws numbers approaching 1 million visitors each year—the biggest challenge, she tells Publishing Perspectives “is not repeating ourselves.

“We have to renew the fair each year,” she says, “so that the 800,000 people who visit us experience it as different each time.”

Schulz brings to her direction of one of the Americas’ largest annual public-facing book-fair events an extensive background in publishing. She’s a former executive editor with Grupo Santillana, an editorial director of Plaza & Janés Mexico, and for almost 10 years directed the catalogue production for Alfaguara and Taurus, imprints of Penguin Random House Grupo Editorial.

She’s also director of LéaLA, the Spanish-language book fair of Los Angeles, which relaunched this year after a four-year hiatus.

“The challenge is also to continue to please people,” she says, “and give them a unique experience and make them want to come back—and [be sure] that they find a completely different fair, a different image, different activities and events, and different books.”

Another challenge, she says, is to be sure “that nobody sees how we suffer all year behind the scenes” with planning, programming, and preparations. 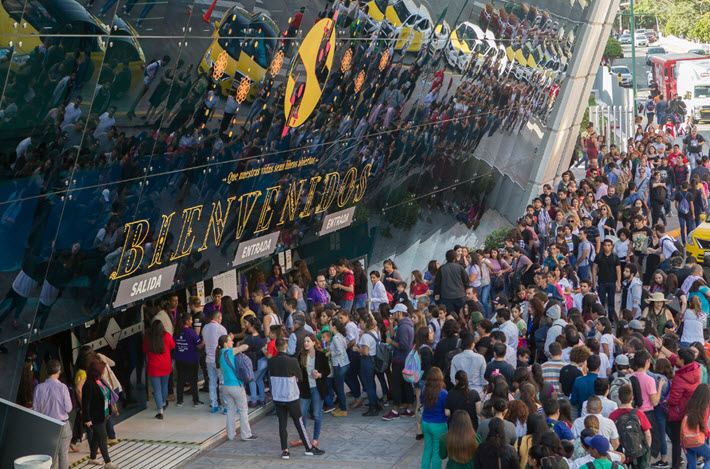 Such annual renovation and diversity, she says, isn’t about change for change’s sake.

“The fair is now so consolidated,” Schulz says, “that we can’t take abrupt turns. Each step we take needs careful analysis, with lots of planning—no drastic changes. We’ll grow the cookbook pavilion, see how the audiobook trend is developing, and whether that sector merits more space,” for example, before making large adjustments.

Three years ago the fair added a comics pavilion, which has been a great success, Schulz says, as has the cookbook center—Libros al gusto (Books to Taste), now in its second year.

“While the fair doesn’t grow physically each year,” she says, “the number of visitors increases, and it’s more diversified.

“We think more and more about international issues and current affairs and what people are wanting to hear about and talk about. We also try to hold activities we haven’t organized before, and to bring in themes of cultural interest that we haven’t touched on in the past.” 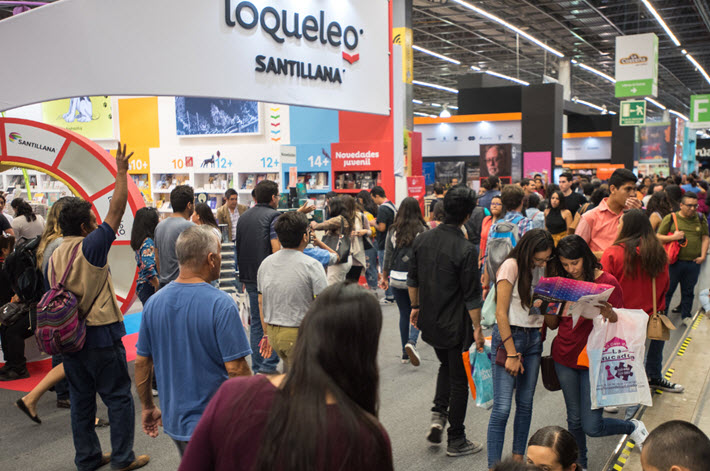 Schulz points to the year-long preparation work on behalf of her team to deliver the fair. “The team behind the fair is like one big satellite dish, working all year to learn what the professional themes are that people in publishing are talking about,” she says.

“Traveling to other book fairs is a fundamental part of our work, to see where the publishing industry is growing—Frankfurt, London, Bologna, Buenos Aires—to see how publishers, libraries, booksellers, and illustrators are working.”

Each year, “we have to see what the fads and fashions are among readers, and what the public demands.”Marisol Schulz, Guadalajara International Book Fair

At Frankfurter Buchmesse for example—which this year added an entire audio-focused exhibition area as well as an “Audio Summit” conference event—”we saw the boom in audiobooks, which has not yet taken root in Mexico,” Schulz says. “Recently there was an adult coloring-book boom, too, but that’s now over. So we have to see what the fads and fashions are among readers, and what the public demands.”

This year the fair has installed audiobook listening posts on the exhibition floor, and they so far have proved to be popular with visitors.

“We’re already planning next year’s fair,” she says, at which the United Arab Emirates’ Sharjah will be guest nation of honor.

And as a guiding principle, keeping the fair diverse is one of the organizing committee’s priorities.

“We have to put together an agenda that’s not just literary,” Schulz says. “Last year, the cookbook pavilion was an experiment, as all projects in the fair are when they start. And all projects are born out of a lot of analysis and hard work.”

‘The Most Noble Thing We Do’ 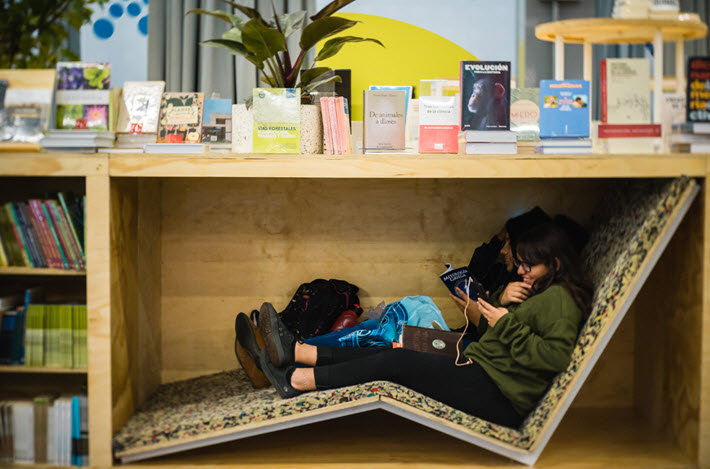 The children’s pavilion is a very important part of the fair, Schulz says, built around two main components—an exhibition area of children’s publishers’ stands and the FILNiños area, in which children can play, learn, and associate fun with books.

“Coming to FILNiños is better than going to Disneyland,” Schulz says, “because the children learn something for the rest of their lives. It’s not just entertainment. They meet authors and that makes an impression on them. It’s the most noble thing we do.

“Traveling to other book fairs is a fundamental part of our work, to see where the publishing industry is growing–Frankfurt, London, Bologna, Buenos Aires–to see how publishers, libraries, booksellers, and illustrators are working.”Marisol Schulz, Guadalajara International Book Fair

“Another of the virtues of the fair,” she says, “is that it brings people together from so many countries.” Schulz counts 47 countries represented this year, inclusive of authors, literary agents, publishers, and other industry professionals.

As Publishing Perspectives readers know, India is this year’s guest market of honor. Countries featured in the program are required to arrive with delegations of at least 50 and to feature authors, publishers, illustrators, and translators. Guest of Honor India, by Sunday, will have staged nine nights of cultural entertainment in the open-air Foro FIL theater space. Each guest of honor also builds and staffs a major pavilion installation that includes a bookstore and art exhibitions.

And the Guadalajara fair will end the year in the black, Schulz says. “We’re far from being in crisis, and our profits made are channeled to the University of Guadalajara, which is the fair’s patron. We’re nonprofit, but part of a prosperous cultural industry.”

The fair’s key revenue streams are rental space for stands, events, ticket sales, and advertising. There’s also funding from the Mexican government, although Schultz says that ministry of culture income was cut this year by 40 percent.

The fair also operates an outreach program, she says, this year taking 170 visiting authors from Mexico and other countries to local schools in Guadalajara’s state of Jalisco, specializing on schools in remote areas from which children may not be able to travel to the fair.

Students from schools nearer the fairgrounds, however, are a major feature of its daily traffic.

“The greatest satisfaction for me,” Marisol Schulz says, “is to see the smiles on the faces of the children who visit.” 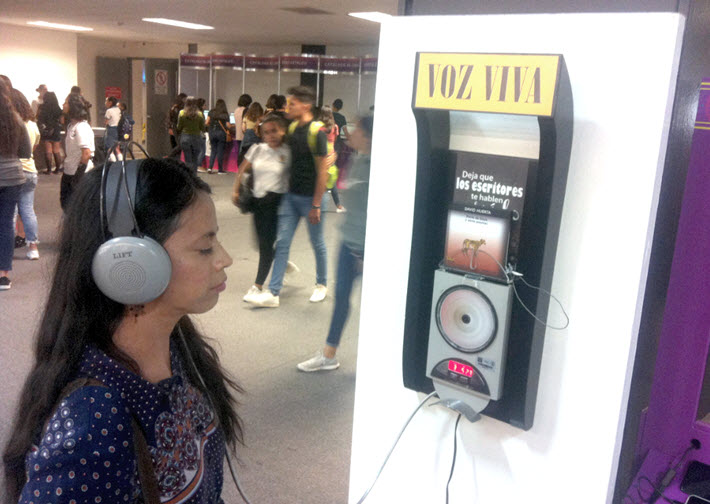 More from Publishing Perspectives on the Guadalajara International Book Fair is here, more from us on Mexico is here, more on publishing in India is here, and more on translation is here.