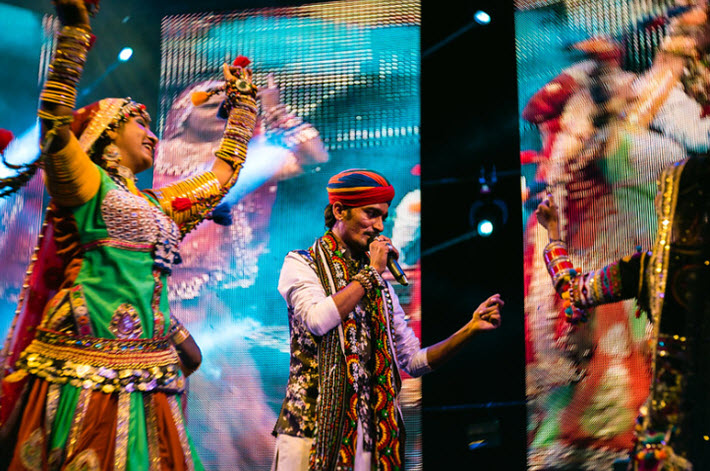 India has sent Spanish translations of children’s books and more than 100 authors to Mexico’s Guadalajara International Book Fair as the show’s 2019 guest of honor market. 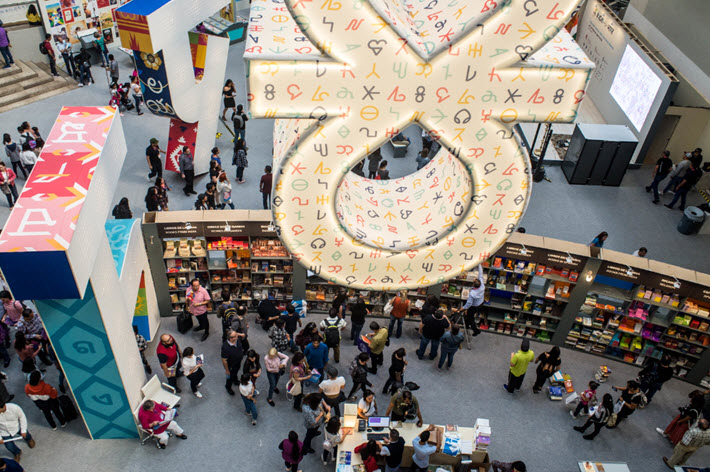 Editor’s note: Ready to tell fair-goers about the Indian market’s 184 languages, 25 writing systems, and literary traditions more than 1,000 years old, Guadalajara’s  2019 guest of honor program is off to a strong start. Be sure to see our interview with HarperCollins India CEO Ananth Padmanabhan about his work in ‘word to screen’ development, too. —Porter Anderson

This week’s turn as Guest of Honor India at the Guadalajara International Book Fair is the vast market’s first such appearance at a Spanish-language fair. And the subcontinent’s complex industry has led its approach with Spanish-language translations of Indian children’s books in a bid for the attention of Latin American rights buyers.

“We want these 12 books to find local publishers,” says Kumar Vikram of India’s National Book Trust, “so we’ve initiated what we see as being a long-term project, to see Indian literature published in Spanish.

“India’s Book Trust” he tells Publishing Perspectives, “has a twin mandate: publishing and book promotion. We’re probably the biggest multilingual publisher in the world, having published in 50 Indian languages, 22 of them official. And we organize the New Delhi World Book Fair, which has been running since 1972 and is the largest book fair in Asia. Our basic mandate is to create a culture of reading and book-mindedness.”

Created by the National Institute for Design in Ahmedabad, the Indian pavilion at Guadalajara includes a forum for panel discussions and book presentations, a bookstore, and a multimedia presentation focused on the planet’s climate crisis. The installation incorporates 18 Indian texts, as well as designs and patterns based in textile cultures traditional in the region.

“The objective of the India pavilion,” Vikram says, “is to reflect the multilingual and multi-script traditions of Indian literature. There hasn’t been much projection of Indian literature in this part of the world. Our objective is also to promote publishers who generally wouldn’t be able to travel because of a lack of resources.”

And translating literature to reach as many readers as possible is something that comes naturally to India’s publishers, he says.

“Knowing several languages is part of our mental make-up in India,” he says. “We’re always translating each other, that’s how the Indian literary landscape is. If you’re a Bengali and you want to read something in Hindi, you need translation. So translation isn’t new to us.”

Translations From India at Guadalajara 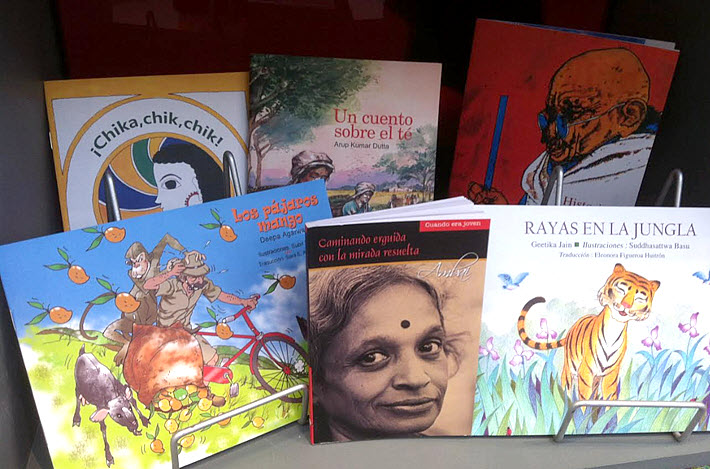 Some of the 12 Spanish translations of Indian children’s books on display at the 2019 Guadalajara International Book Fair Guest of Honor India pavilion. Image: Adam Critchley

The pavilion showcases posters promoting the 12 Indian books available on sale in Spanish translation. Some of those books’ authors are on hand in Guadalajara.

The Indian embassy provided support in a search for a team of seven translators led by Wendy Philips, a Cambridge Sanskrit scholar and professor at Mexico’s National Autonomous University. The books, published by the National Book Trust, are:

“The authors we’ve brought to Guadalajara,” Vikram says, “are quite well known in their own languages, but haven’t had an international platform. As an example, he points to Stories from Bapu’s Life, which is about Mahatma Gandhi. That book, he says, has sold more than a million copies in India.

“The Indian market per se is in itself so big that the authors’ and publishers’ first priority is to make a domestic impact,” he says. “If you can get that kind of exposure at a national level, then you don’t feel left out because India is such a big platform in itself.” 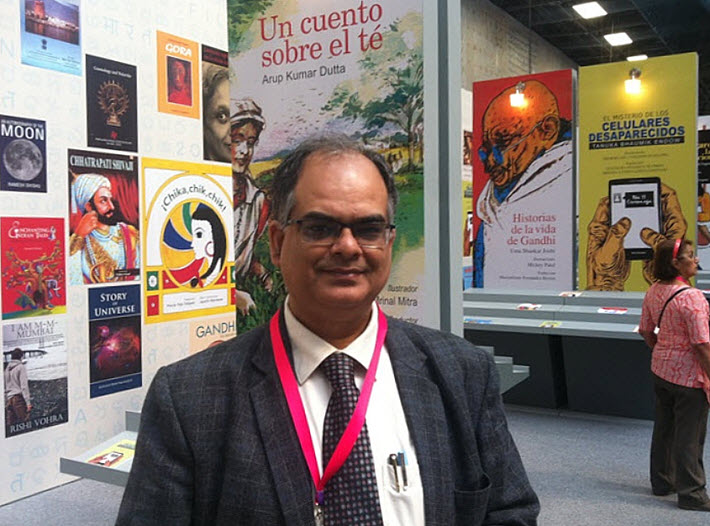 At the industry level, Vikram says, India’s presence at Guadalajara should leverage new channels for sales and reach.

“Being guest of honor in Guadalajara will open up a whole new world for us in Latin America,” he says. “We’re now looking for Mexican publishers who’ll take these books into the Mexican market. And we’re also in talks with Mexican publishers to buy rights, so we can translate books into Hindi for the Indian market. This is just the beginning of what we think will be a fruitful relationship.”

“We have to look at the Americas as a whole and try to make an initial splash, before we start concentrating on individual countries. “Kumar Vikram, National Book Trust, India

India is using Guadalajara to tout a rights catalogue of more than 200 titles from some 30 publishers.

“Most of those books already available in English translation have already been taken,” Vikram says, “which is a big step forward. They cover all genres, from children’s books, fiction, and nonfiction, to science, health, and yoga.

“Reaching the Spanish language is a big step for us, but if a book is translated and published in Mexico, it’s not a given that it will reach the entire Spanish-speaking world. It’s not that easy. So little by little, we also want to sell rights to other Spanish-language countries in the Americas. We have to look at the Americas as a whole and try to make an initial splash, before we start concentrating on individual countries. The Americas are like Asia, a huge continent with so many different countries.

“It’s a long and complicated route, and it takes time and patience, finding readers for books.”

It’s interesting that when it came to seeking Spanish-language readers for books from India, the National Book Trust’s focus fell first on Latin America, rather than on Spain.

“Spain has somehow not been in the scheme of things as yet,” Vikram says, “but there’s potential there.”

But Europe is on the trust’s radar, he says, with India set to be guest nation of honor at the Salon de Livre in Paris, March 20 to 23. That continues a series of guest-market appearances that has included the Abu Dhabi International Book Fair earlier this year, Singapore in 2014, Seoul in 2013, and Frankfurter Buchmesse in 2006.

Vikram also points to the symbolic importance of India in Guadalajara, Mexico having been the first Latin America to recognize India’s independence. In 2020, the two countries will celebrate 70 years of diplomatic relations.

“We hope to have a reciprocal arrangement so that in a few years’ time Mexico comes to the New Delhi World Book Fair,” Kumar Vikram says. “We want to Institutionalize Mexican-Indian cultural ties beyond the fair as our end result.” 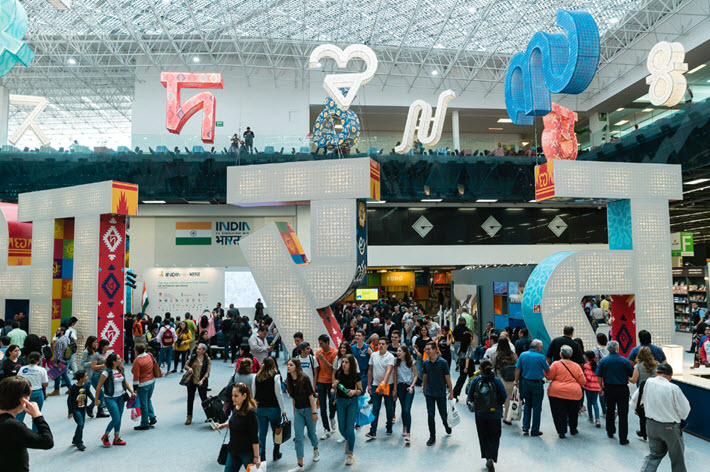 At Guest of Honor India’s pavilion on the exhibition floor of the 2019 Guadalajara International Book Fair. Image: FIL, Nabil Quintero

More from Publishing Perspectives on the Guadalajara International Book Fair is here, more from us on Mexico is here, more on publishing in India is here, and more on translation is here.