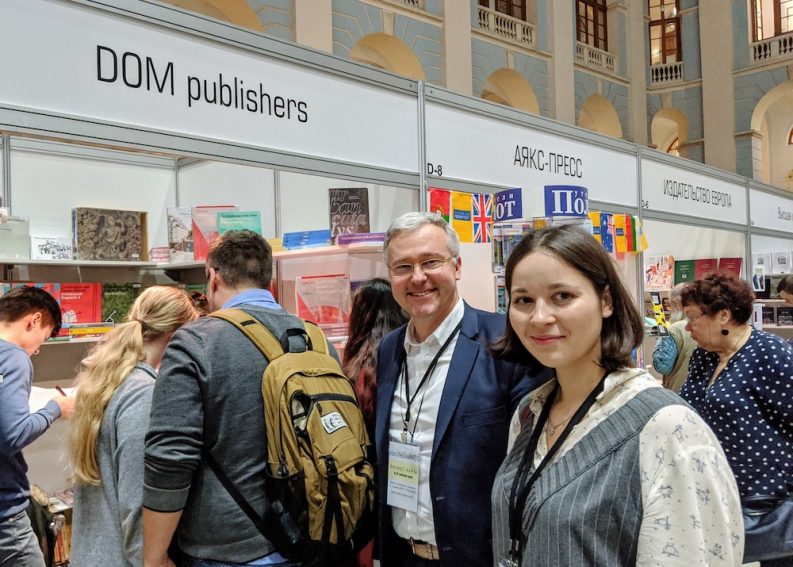 Berlin-based Dom Publishers has built its own distribution and sales network in Russia to navigate local regulations and fill a niche in the book market. 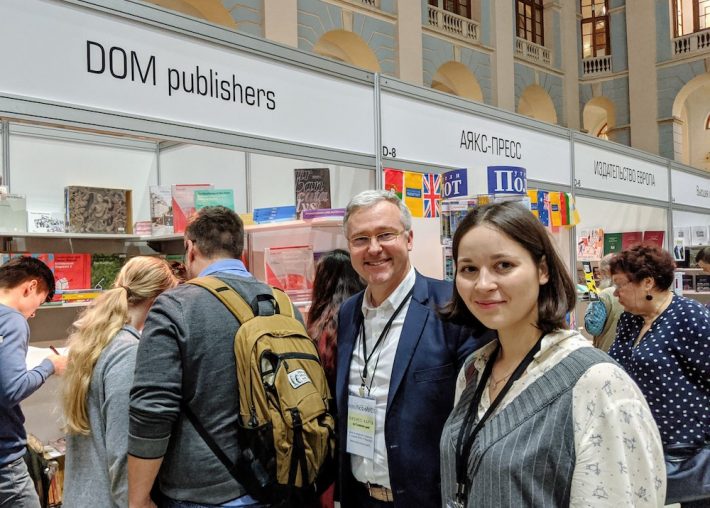 Philipp Meuser and Karina Diemer at the Dom Publishers stand during the 2019 Non/fiction book fair in Moscow. Image: Hannah Johnson

Three years ago, when Philipp Meuser, architect and publisher of Dom Publishing, met Moscow-based Karina Diemer, it would be the start of Dom’s official foray into the Russian publishing market—where few foreign publishers have established presences.

Dom, headquartered in Berlin and founded 14 years ago, specializes in a wide range of architecture books—from guidebooks for travelers and enthusiasts to academic and scientific works. While their titles cover architecture in many regions and countries, Dom has a particular focus on Russian architecture.

“From the very beginning, we have been publishing books on Soviet architecture,” Meuser told Publishing Perspectives. “We cover the whole world, but Russia and the former Soviet republics are a special focus of our publishing business.”

At their stand at the Non/fiction book fair in Moscow last week, Dom displayed books in English, Russian, and German, reflecting their international approach to the business.

This international approach is driven, in part, by what Meuser characterizes as the company’s “cultural mission” to “bring more popularity or publicity to the [relatively] unknown history of Soviet architecture but also Russian architecture.”

It’s also driven Meuser’s goal to make his books on Russian architecture available at a market-appropriate price to Russian readers.

“We were just writing on the area, but the books weren’t available in this area,” said Meuser, referring to the time before he and Diemer were able to establish an import, distribution, and sales network in Russia for their books.

Establishing an Import and Sales Network in Russia 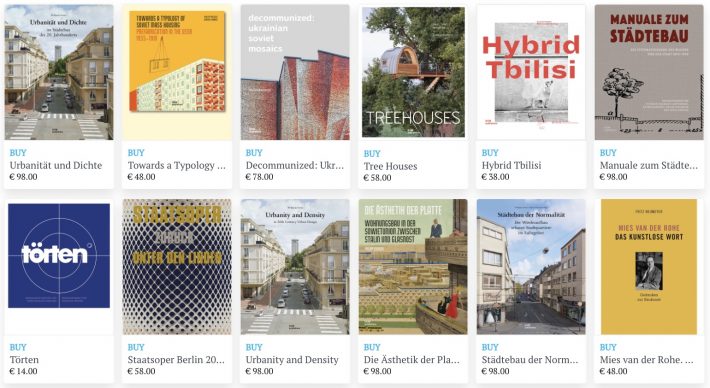 A selection of monographs published by Dom Publishers

“For many years, I’d been carrying books in my baggage” from Germany to Russia, said Meuser. He called this a “gray” method of importing his books to Russia, and one that didn’t allow the books to be sold through official channels there.

Even when he was able to send a pallet of books to Russia and clear customs “in a general way,” Meuser said, the books didn’t have the necessary clearance to be sold to distributors, booksellers, or institutions. He could only sell those books against cash payments.

“Even in these difficult political times, we established this whole business, which is not so easy. And for that I’m quite proud.”Philipp Meuser, Dom Publishers

And importing books to Russia through an international distributor “makes the books very expensive,” said Meuser. “We did that before, and our books—like all the other international books—were 120 percent of the price you pay abroad.”

What Dom needed was a “white” import method that could get its books to Russian readers at a price suited to the market. That “white” import was only possible by having someone on the ground in Russia to navigate the regulations and relationships. “As a foreigner,” said Meuser, “it might not be possible to find a path through this jungle of regulations.”

This is where Diemer’s critical role comes in. Working as a representative of Dom on the ground in Russia, Diemer has been able to jump through the regulatory hoops necessary for Dom to import books themselves, then sell to local distributors, bookstores, and institutions.

“Now that we’ve established this,” said Meuser, “it’s now possible for book chains to buy from us. Distributors can buy from us. State institutions like museums and the architects’ union, all these strategic partners are able to officially buy books from us. This is a good base to establish this whole business in Russia.”

Today, Diemer said, “We have our own web shop in Russia, and we have the main distributor [Jupiter] that works with the major chains and bookshops here. And also we have strategic partners with whom we can do something more than just selling the books.”

One such partner is the Shchusev State Museum of Architecture, with which Dom “has formed a publishing program,” said Deimer.

“Even in these difficult political times, we established this whole business, which is not so easy. And for that I’m quite proud,” said Meuser.

On Working in Russia

Diemer also oversees the publishing house’s response to the all-too-frequent and rapid changes in Russia’s regulations.

For example, Meuser said, “A week ahead, you get the information that the whole payment system in your web shop needs another approval and evaluation, and if you don’t implement it, you have to close the web shop until you’ve implemented it.”

“I think people should stop being afraid, and they should stop watching movies about Soviet soldiers. They should visit.”Karina Diemer, Dom Publishers

Diemer takes this all in stride. “Luckily,” she said, “the people I work with are able to help me and react to these changes. And you need a good sense of humor to work in this situation. So you read a new order from the government, and you laugh about it, and you say, ‘OK, let’s go on with it.’”

When asked why more foreign publishers haven’t made strides in the Russian market, Diemer jumped at the chance to answer: “Because my own colleagues in Berlin think that Russia is so far from Europe,” she said. “They travel to Asia, Australia, the US, but for some reason, it’s Russia that’s really far.

“Maybe because of the mentality or traditions or history, but I think people are just afraid. They don’t know anything about the country. They think it’s some wild area. Many times, people have asked me if we have mobile phones, computers, or even Coke. 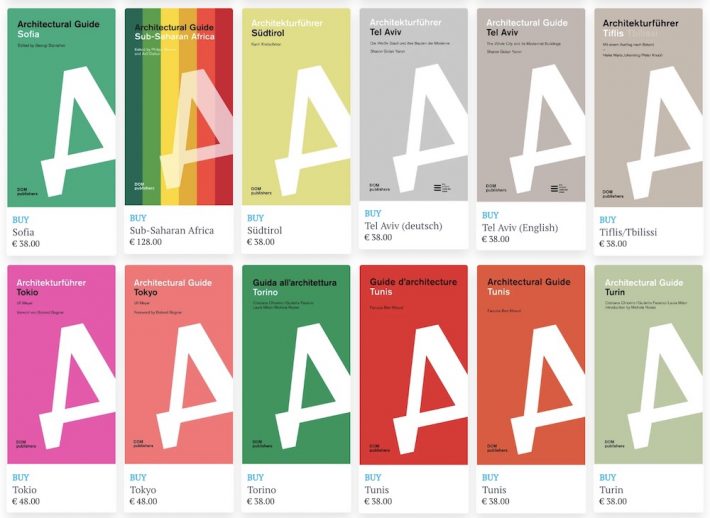 In the field of architecture, Dom’s publishing program is varied. Its city and regional architecture guides cover destinations from Aarhus to Yerevan and are meant for both casual readers and experts.

And its monographs explore a range of topics from individual architects like Mies van der Rohe to subjects like Soviet mass housing and tree houses.

“We feature subjects you’d expect for an architecture publisher, but in between we have a lot of books that are a small niche,” said Meuser. “Architecture itself is a niche, but within the niche, we also try to cover the niche.”

More from Publishing Perspectives on Moscow’s Non/Fiction Book Fair is here, and more on the Russian market is here.