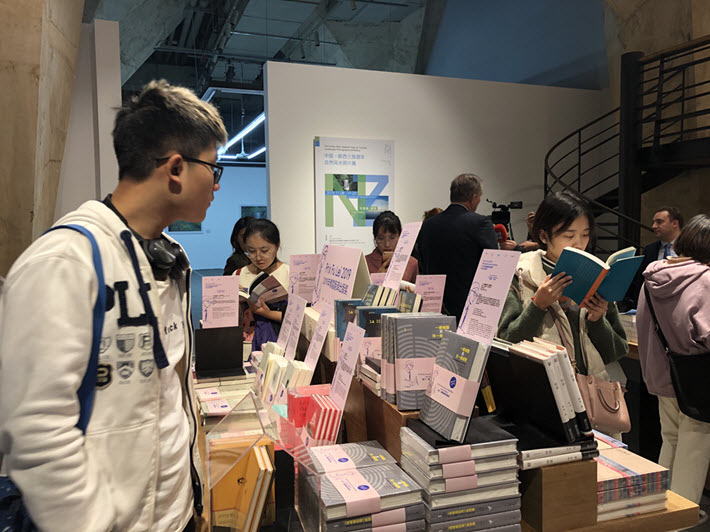 Continuing a longstanding tradition of cultural relations between France and China, the Prix Fu Lei’s trio of winners this year translated works by Foucault, Céline, and Adimi. 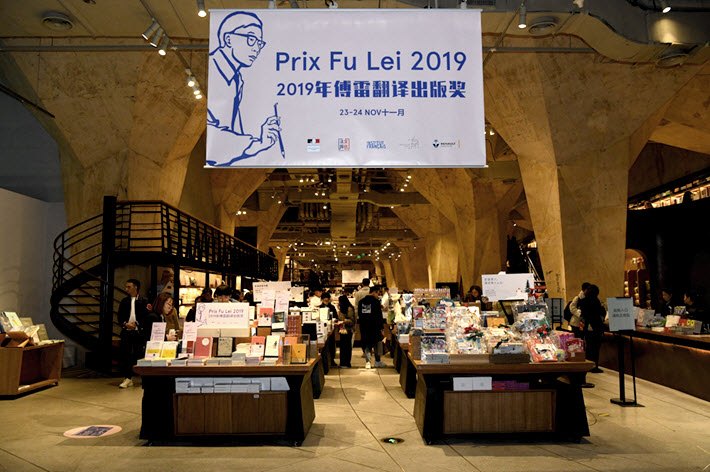 Editor’s note: The Prix Fu Lei is among the world’s most poignantly named literary awards, recalling the famous Chinese Francophone translator who committed suicide with his wife Zhu Meifu in 1966. Fu, then only 58, was accused of being a ‘rightist’ at the start of the Cultural Revolution. Today, the Chinese-French cooperative program honors contemporary translators in Fu’s name. —Porter Anderson

On November 23 and 24 at Chengdu’s spectacular 5,000-square-meter Fang Suo bookstore, the buzz was all about French literature.

The store was designed by Taiwan architect Chu Chi-Kang in the Sichuan province capital. It hosted the 11th iteration of the Prix Fu Lei, which is awarded to three Chinese translators for their interpretations of French literature. One translation is in fiction, one is in nonfiction, and the third is the work of an up-and-coming translator. The program this year also included conference events on literature.

According to Beijing’s state office of press and publications, the book industry’s revenue in 2018 was estimated at 93.73 billion yuan (US$13.3 billion). The government says China bought translation publication rights for 16,829 titles from abroad. Publishers in many parts of the world want to get into the market and China is the country to which the French industry makes the largest share of its international rights sales.

While France officially recognized the People’s Republic of China in January 1964, cultural relations began long before that, and the Prix Fu Lei ceremony is one way those ties are nurtured today. The award takes its name from China’s most respected translator of French literature. Born in 1908, Fu Lei studied literature and art history in Paris as a young adult. From the early 1930s into the early 1960s, he introduced Chinese readers to works of Voltaire, Honoré de Balzac, Romain Rolland, André Maurois, Hippolyte Taine, and others.

The Prix Fu Lei program was founded in 2009 by the French embassy in China with a group of Francophone Chinese intellectuals led by Dong Qiang, an author, translator, and professor of French literature. The 2019 program’s regulations required that titles submitted to the jury must have been published by April 30 of this year. A publisher can propose a maximum of two titles per year.

This year’s prizes were awarded to:

‘The Intellectual Dialogue Between China and France’

The criteria for the work of winning translators, said 2019 jury chair Guillaume Dutournier, includes the difficulty of a selection; fidelity to the original text; a work’s historical value, which should resonate in contemporary China; and the quality of publication. The idea, he said, “is to maintain the intellectual dialogue between China and France” as well as recognizing translators whose work is increasing in quality and supporting a new generation of translators.

The prizes are worth approximately US$4,500 for the fiction and nonfiction awards. In those cases, two-thirds of a purse goes to the translator and one-third to the publisher. The winner of the prize for an emerging translator receives a purse worth some US$1,650 and keeps the entire amount.

The Fu Lei budget this year, organizers say, was roughly US$107,900—a sum financed primarily by the hosting Fang Suo company and Renault, while the book office of the French embassy covered the rest. This year was the second time the Prix Fu Lei ceremony was held at a Fang Suo bookstore: the 2017 prize program was set at the company’s Guangzhou location.

The Fang Suo company is owned by entrepreneur and fashion designer Mao Jihong.  Known for his concept of “new luxury,” Mao dresses China’s first lady Peng Liyuan and other celebrities. He said that he has always enjoyed reading and that he opened his chain of bookstores because, “Fashion isn’t for everyone, but books are.”

Dong: ‘To Recreate This Atmosphere’ 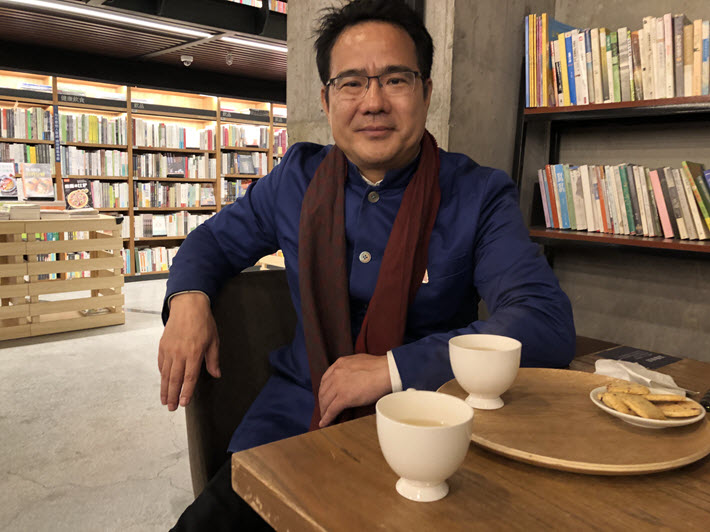 Dong Qiang, a co-founder of the Prix Fu Lei, at the awards ceremony in Chengdu. Image: Olivia Snaije

French guests of honor at the ceremony in Chengdu included the author, playwright, filmmaker, and Prix Goncourt jury member Éric-Emmanuel Schmitt.  Also there was the author and professor David Diop, whose novel Frère d’âme (Soul Brother) won the 31st Prix Goncourt des Lycéens and China’s first Choix Goncourt de la Chine organized by the French Institute in China and universities around the country. The Chinese edition of Diop’s book is just out, published by Shanghai 99.

When asked why they’d studied French, Francophone Chinese attendees were divided into two groups. Those educated in the 1980s said they’d had the language chosen for them by the government, while younger participants said they’d chosen French, themselves.

Li Keyong, a professor of French and president of the Sichuan International Studies University, said his class was the first to graduate in French studies following the 1981 Gang of Four trial. He was, he said, simply told that his subject would be French.

Prix Fu Lei co-founder Dong said that after studying French in the 1980s, he was given a scholarship for graduate studies by the French government and ended up staying in France for 12 years before returning to China in 2001. On his return, he said, he regretted finding “an Americanization of China. French culture was fading. So I spent nearly 10 years translating 20 books—from surrealists to philosophers—to create a baseline for books.”

There had always been, Dong said, “a real fan club for French literature” in China. “And I wanted to recreate this atmosphere. France influenced China so much with authors and thinkers as we entered into modernity in the early 20th century.”

‘From Surrealists to Philosophers’ 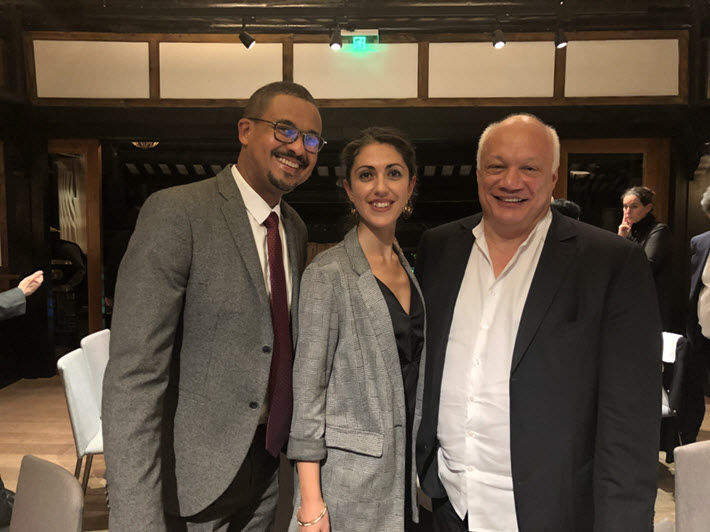 At the Prix Fu Lei 2019 ceremony in Chengdu, from left, are David Diop, his wife Valérie, and Éric-Emmanuel Schmitt. Image: Olivia Snaije

Translator Lin Yuan, who won the 2017 Prix Fu Lei for her work with Sorj Chalandon’s Retour à Killibegs (Return to Killibegs), said she was a rebel in high school and that she’d been drawn to France by its culture. In addition to reading Stendhal, she said, she was deeply moved by Luc Besson’s 1988 film, The Big Blue. Lin was given a grant to study journalism in France for two years and has been working for the cultural service of the French embassy in Beijing for six years.

She said she recently pitched a graphic novel to a Beijing publisher for translation. Winning the Prix Fu Lei gave her confidence, she said, and validated her work.

Another motivation for studying French in China today is the country’s dominant presence on the African continent, which includes a number of Francophone countries. Li said that of the 200 students learning French at his university’s branch in Chengdu, most go to Africa for work. He said he also sees a rising interest in Francophone authors from Africa.

Judith Oriol, the embassy’s cultural attaché for books and debates, is a former rights manager with Gallimard and part of the Prix Fu Lei organizing team. She confirmed that Chinese publishers are curious about African authors. Gallimard’s Continents Noirs imprint, which specializes in literature from the African continent, is of particular interest to publishers, Oriol said.

France has long cultivated a policy of soft power in the arena of culture with its international French Institute network, not unlike Germany’s Goethe-Institut, the British Council, and China’s Confucius Institute.

Last year, according to embassy figures, French publishers signed 2,033 rights contracts with Chinese publishers, and that doesn’t include many translations from French into Mandarin for books in the public domain.

Translations, of course, are a key part of these transactions, and the Prix Fu Lei helps to encourage translators, most of whom can’t live from translation alone, to continue their work. And in an age of new consumerism in China, Dong said, the Prix Fu Lei helps to preserve the idea that France represents something else—art, literature, and ideas.