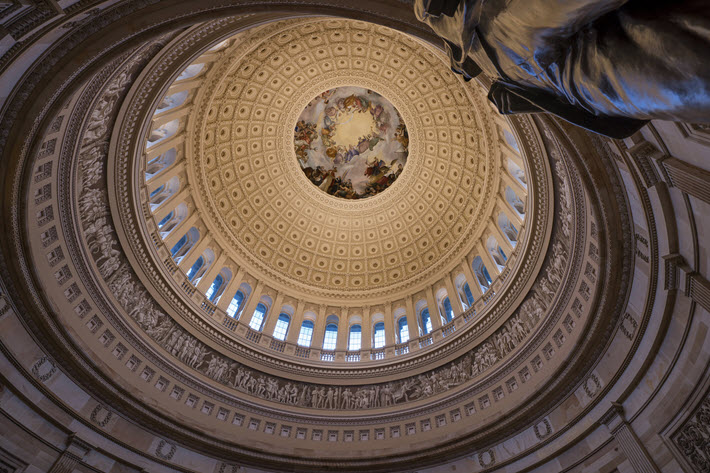 The AAP leadership and that of the Copyright Alliance are standing with a group of lawmakers, calling out the American Law Institute’s ‘restatement’ project’ in copyright law.

In the US Capitol Rotunda. Image – iStockphoto: Serge Yatunin

Pallante: ‘To Circumvent the Authority of Congress’

An interesting discussion around copyright is developing with Tuesday’s (December 3) release by the Association of American Publishers (AAP) of a statement on a “copyright restatement project” underway at the American Law Institute (ALI). That comment from the AAP has been followed Wednesday (December 4) by a similar statement from the Copyright Alliance.

And while the core of the argument developing here lies deep in legal assessment—less accessible to many in publishing than the familiar top-level questions of copyright protection for authors and publishers—the occasion is important for just that reason: A quiet but potentially influential reappraisal of copyright law could, as one commentator has put it, “introduce greater confusion into its area of focus.”

At the publishers’ association, president and CEO Maria A. Pallante goes so far as to call the restatement project “a back door effort to circumvent the authority of Congress and undermine the copyright system that fuels our creative economy.”

To get some background on the situation, we can look at objections lodged in articles early this year in reference to ALI’s effort.

“For more than 200 years, US copyright law has served as a crucial incentive to publishers, authors, composers, and countless other artists.”Maria A. Pallante, Association of American Publishers

At the Above the Law newsletter, Scott Alan Burroughs of the art law firm Doniger/Burroughs wrote in January both about what has become customary from ALI—and why a copyright restatement is out of character: “The ALI is known for its restatements of laws,” Burroughs wrote, “regarding areas of state law that differ greatly in their application from state to state, such as torts.

“In an unprecedented departure for the organization, it has set now set its sights on federal law promulgated by a federal statute, the Copyright Act.”

Not only is this effort of more than three years by ALI an unusual foray for the organization, Burroughs wrote, but it appears to be a potentially dangerous gravitation toward the support of major tech media companies.

“From a preliminary review of the project’s language,” Burroush wrote, “the copyright law is being ‘restated’ in a manner that greatly favors Big Tech and their confederates in their ongoing campaign to devalue art and content. … If adopted and relied upon, it will make it even easier for Big Tech and other corporate interests to exploit original content without artist compensation or consent (an advantage that they certainly do not need).”

In February, Washington Legal Foundation’s Glenn G. Lammi wrote at Forbes, “ALI has built its reputation in the judicial and legal communities by releasing treatises that add value to an area of law. Re-wording a federal statute and offering commentary on which among many judicial interpretations of that statute’s provisions is ‘right’ doesn’t add such value.”

US Lawmakers Weigh In

The congressional letter first echoes the surprise of many in the community about the nature of the ALI project: “Throughout its almost 100 years of existence,” the Congress members’ letter reads, “ALI has never chosen to draft a restatement of an area of the law that is almost exclusively federal statutory law—until now. We are deeply concerned by the ALI’s current Copyright Restatement Project.”

The lawmakers note that the US Copyright Office shared its leadership’s concerns with ALI in the same January period in which Burroughs’ and other observers’ articles of alarm were appearing in the news media. Expressions of concern also were registered by the US Patent and Trademark Office and the intellectual property law section of the American Bar Association.

The congressional letter then creates a short list of questions, calling on ALI to state its intentions. Some of the points of inquiry the lawmakers demand answers to are, in essence:

AAP and Alliance Support for the Congressional Letter

And AAP president and CEO Maria A. Pallante adds a comment of her own. Pallante, you’ll remember, is highly conversant in copyright law, having served as Acting Register of Copyrights and associate director of the office’s policy and international affairs as well as general counsel before moving to AAP. Pallante now writes:

“For more than 200 years, US copyright law has served as a crucial incentive to publishers, authors, composers, and countless other artists, enabling the creation and dissemination of works that improve our lives, enhance our culture, and drive an economic engine that delivers US$1.3 trillion in annual value to US GDP.

“The ALI’s attempt to reinterpret this critically important federal statute should be seen for what it is: a back door effort to circumvent the authority of Congress and undermine the copyright system that fuels our creative economy. Importantly, the letter amplifies concerns already raised by the US Copyright Office, the US Patent and Trademark Office, the American Bar Association IP law section, federal judges, prominent legal scholars, and a long list of industry groups and other organizations.

“We thank Senator Tillis and Representatives Cline, Roby, Deutch and Rouda for their strong leadership on this important issue.”

And Keith Kupferschmid, CEO of the Copyright Alliance, like the AAP based in Washington, DC, writes in his Wednesday statement: 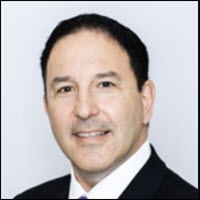 “On December 3, a letter was sent to the American Law Institute’s director Revesz by Senator Tillis and Representatives Cline, Deutch, Roby and Rouda, stating significant concerns regarding ALI’s Copyright Restatement Project. We at the Copyright Alliance echo the many concerns expressed, particularly the fact that federal copyright law—which is governed by the 1976 Copyright Act—is ill-suited to a restatement because it is clearly articulated by Congress, and thank the senator and representatives for voicing their concerns.

“Today’s Copyright Act is the result of many years of discussions and compromises that have taken place in Congress and which are recorded in numerous committee reports, testimonies and thousands of pages of committee hearing transcripts. As stated clearly in the December 3 letter by the senator and representatives, ‘courts should rely upon statutory text and legislative history, not [on] Restatements that attempt to replace the statutory language and legislative history established by Congress with novel interpretation’. We could not agree more with this statement. …

“If the ALI is to continue to move forward with this misguided project, it must address these and the many other significant and very real concerns that have been raised by the Senator and Representatives and many others who have spoken up.”

ALI is being asked to reply to the congressional letter by January 3.