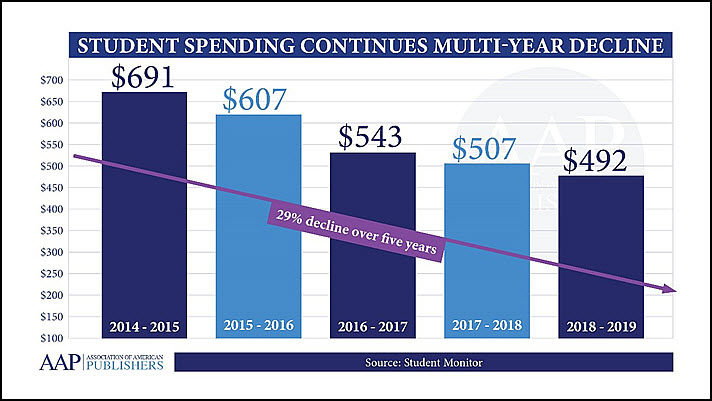 Charting a five-year downturn in US college students’ average spend on course materials, the Association of American Publishers reports an autumn-semester drop of 23 percent. 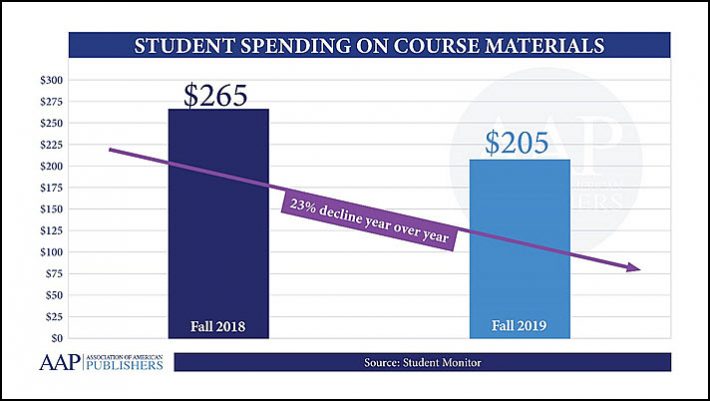 The Association of American Publishers (AAP) today (December 12) has released a report on updated data, which indicates that average student spending on college textbooks and course materials in the United States has dropped 23 percent compared to the same term last year.

The research behind the report has been done by Student Monitor, an independent firm that performs national studies for government agencies and nonprofit organizations as well as for marketers targeting students as a consumer group. Student Monitor is one of two firms quoted in a September 11 report by the association. The September report described a drop of average student spending on college textbooks and course materials of 29 percent over five years.

Today’s follow-up, focused on the fall semester, sees the downward trend continuing. Student Monitor says that an average college student in 2018 spent US$265 to buy or rent course materials last year, while spending only $205 for the autumn term this year.

Student Monitor uses one-on-one interviews with 1,200 full-time undergraduate students enrolled in 100 representative, four-year colleges and universities in the United States. Samples are controlled for gender and years of study to produce a representative pool consistent with US Census guidance in geographic locations, types of schools (public or private), and enrollment.

As Publishing Perspectives readers will recall from the September report, the Student Monitor data is reflected in similar output from  Student Watch, which then reported a drop in spending of 35 percent over the past five years. Student Watch’s methodology involves a survey of more than 20,000 students across 42 institutions and is funded by the National Association of College Stores.

The AAP interpretation of the new data from Student Monitor for the autumn semester “reflects the fact that students are taking full advantage of the new, cost-effective options that publishers have made available, including initiatives such as Inclusive Access, which provides students with course materials on the first day of class, often at a reduced cost. Other options like subscription models provide unlimited access to a range of textbooks, open course materials, online homework access codes and study guides, all for one price.”

And in that regard, it’s interesting to see a breakdown of where Student Monitor sees average student spending going. From the $205 average spend by a student this fall, the research shows this division:

AAP makes the point that across the board, each of those categories saw a decline in average spending in the current semester. 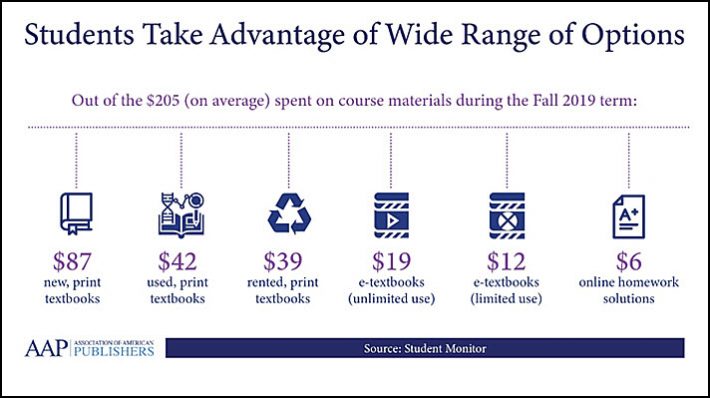 At a moment when such trends would seem to pave the way for a boom in digital subscription services for course materials—those “new, cost-effective options” that AAP mentions—the Cengage and McGraw-Hill Education merger announced in May continues to face pushback ahead of regulatory approval.

As Sara Grace reported at Publishers Lunch on December 4, “The College Store Trade Group has expressed opposition to the Cengage/McGraw-Hill merger, according to a letter obtained by the Capitol Forum. Previously, the trade group, which represents more than 3,000 college bookstores, had told the Department of Justice it was neutral on the merger.

“That position apparently changed when Cengage informed bookstores that it was revising its pricing structure for certain digital-access products. Formerly, bookstores received a 20-percent discount on some products, allowing the bookstores to make a profit while still matching these products’ pricing on the Cengage site. But as of December 14, Cengage no longer will offer stores the discount.”

While projecting a closing date for the McGraw-Hill merger near the end of 2020’s first quarter, Cengage has nevertheless implemented a restructuring with layoffs while in mid-November reporting revenue falls of $63.9 million for fiscal Q2, which ended September 30, although Cengage has stood by its profit outlook for the year. The company reported that the merger already had cost it some $13.6 million.

And the issue of course content costs for students as an ethical dilemma was brought into focus on Wednesday (December 11) with the publication at The New York Times of Columbia Law School professor Tim Wu’s opinion piece “How Professors Help Rip Off Students.” Wu’s piece examines what he calls “the professional ethics of allowing a book to be sold at exploitative prices to young people.” 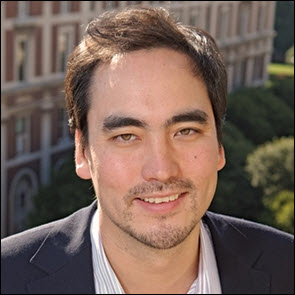 Wu, who is the author of The Curse of Bigness: Antitrust in the New Gilded Age (Columbia Global Reports, 2018), writes, “The root problem is that it is just too easy for us, the professors, to spend other people’s money. Just like doctors who prescribe expensive medicine, we don’t feel the pain of buying a $211 book of uneven quality and no real use when the course is finished, or a digital access code that costs $100 and is designed at least in part to disable the used-book market.”

Asserting that instructors should at least survey “what’s out there” as an alternative to expensive traditional options, Wu lists several potential alternatives, writing, “The Rice University-based nonprofit OpenSTAX has spent years developing high-quality, peer-reviewed textbooks that are free or cheap for more than 20 of the most popular college subjects. MIT has an impressive collection of free online textbooks, and there are others. The publisher Cengage has been experimenting with a Netflix-style subscription model.”

However challenging the growing crisis of college-level educational content may be, the numbers reported today by Student Monitor and AAP indicate that the half-decade slide in sales hasn’t yet bottomed out. And Wu’s consideration of the ethical dimensions of the problem for educators reflects a level of reputation damage for the industry that may be going up as fast as revenues are coming down.

Wu writes, “I long felt guilty teaching first-year criminal law out of a mediocre book that was both detested by my students and priced at $235. I gave up and switched to a free book from Harvard’s H2O project. It required work to switch, but it saved my students money and felt like a sweet liberation from a nasty racket.” 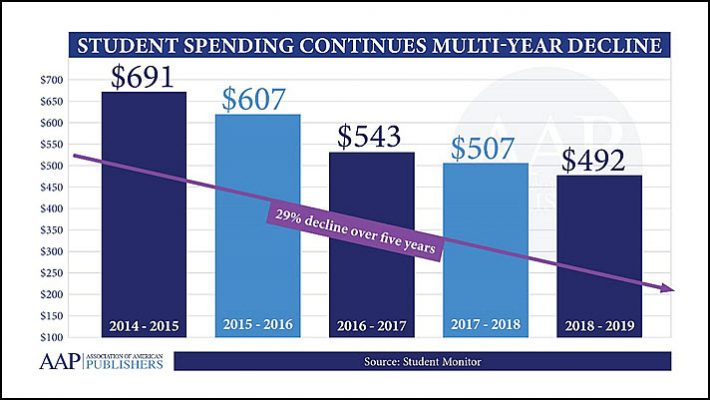 More from Publishing Perspectives on educational publishing is here, and more from us on the Association of American Publishers is here. More of our Industry Notes series is here.