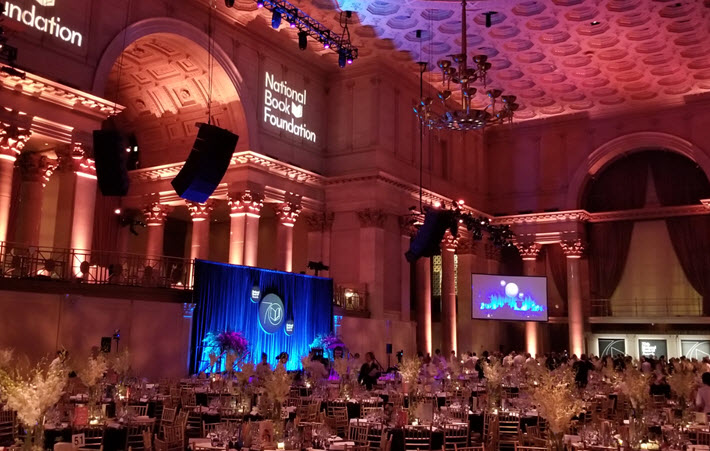 In its 70th year, the US National Book Awards appear ready to turn their staying power into stability, and coupled their 2019 annual prize-fest with an appeal for funding. 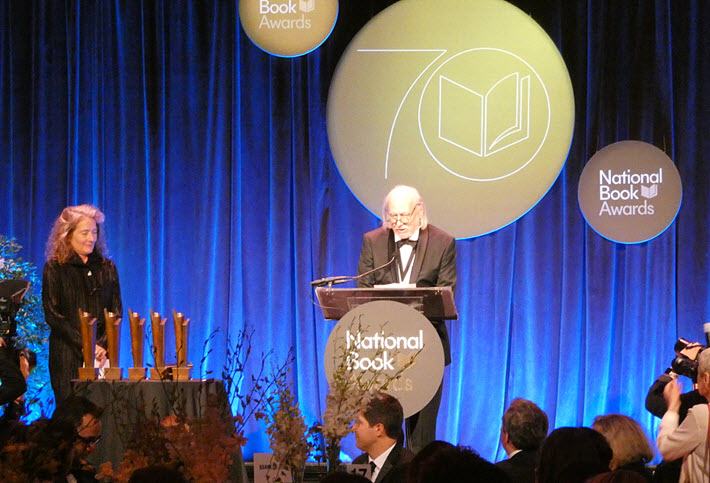 László Krasznahorkai accepts the 2019 National Book Award for Translated Literature for ‘Baron Wenckheim’s Homecoming,’ watched by his translator from Hungarian with which he shares the honor, Ottilie Mulzet. Image: Porter Anderson

‘A Prominent Place’ for Books in American Culture

As the 70th annual National Book Awards ceremony in New York City tonight (Novmber 20) went through its paces, the evening was its traditional mix of serious content and boisterous celebration, screams and cheers welcoming the finalists and winners of some of the most profound publications of the year.

And in seven decades as the country’s highest-profile recognition, the National Book Foundation‘s program may never have been closer to the tenor of its political moment, as host LeVar Burton told remote viewers of the livestream that during the dinner break, the video feed would be showing “Kanye West and Donald Trump sitting and willfully not reading.”

That wisecracking, boisterous tone was everywhere in the cavernous Cipriani Wall Street ballroom tonight, as many of the leaders of the American publishing industry watched a succession of six winners—five authors and a translator—named:

Comments from the stage kept the crowd roaring, as when the prolific author and producer Martin Sandler—at least five times an Emmy winner and twice a Pulitzer nominee—told the audience that having written 60 books, he plans to write at least 60 more.

And Broom, on winning the nonfiction prize for The Yellow House, made a luminous tribute to her mother, crediting her with “wolfing down words, insatiable, which is how I learned that words were a kind of sustenance … ‘Make me know,’ my mother was always saying, in between raising 12 humans.

“I am in this room, semicolon; and so is my mother.”

And yet, with such an auspicious demonstration of staying power evident everywhere in the evening’s “70th!” branding, the National Book Awards program rightly asserted itself as the central story of the night this year, and one that itself may warrant more specifically dedicated support than it sometimes receives.

May I Have Your Envelope, Please? 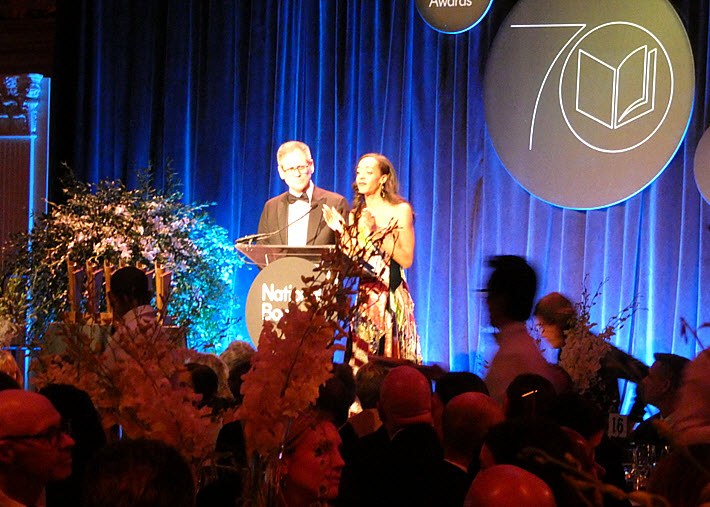 In one of her most interesting comments to us for our Publishing Perspectives interview, National Book Foundation executive director Lisa Lucas said that whenever her tenure at the helm comes to an end, “The thing I want most to leave behind is as much of a shot as possible at lasting as long as it can. Anchoring it. Making sure that we are unshakable.”

And in what may be the most direct appeal she has made at the glitzy yearly event yet, Lucas tonight said that each year the beautifully printed playbill at every attendee’s seat contained a donation envelope. And from more than 700 attendees last year, the organization saw just one of those envelopes used–only one donation to the nonprofit National Book Foundation was made from the floor of the black-tie 2018 National Book Awards event.

At the moment she was speaking tonight, Lucas revealed, the organization had raised some $900,000 from the evening.

“Did your job pay for you to be here?” Lucas asked the audience members, many of them there on tickets bought by the publishing houses and associated businesses for which they work. It’s to those festively attired and financially comfortable attendees she was looking for more. A bit later in the evening, LeVar Burton announced that 78 donation envelopes had been received, and he picked up on Lucas’ theme, holding out for more.

Seventy dollars from each attendee at Cipriani this year, Lucas said, would cover the $50,000 it will take in 2020 to deliver publisher-donated books to under-served readers in many parts of the country.

These funding comments from the stage during Lucas’ and board chair David Steinberger’s segment made it seem evident that this is an organization looking to secure its presence in a future that will be fraught with more–not fewer–challenges to the place of books and reading in the nation and world.

As Steinberger put it, the mission of the program is “to celebrate the best literature in America,  to expand its audience, and to ensure that books have a prominent place in American culture”—all closely aligned with book publishing, particularly in the digital era.

And yet, while some of the best known international literary awards are sponsored on multi-year contracts by corporate entities and foundations—or operated on major endowments—the United States’ key prize program raises its money each year.

This annual awards program is a benefit dinner, and its  business sponsors for the awards, this year, as listed in the evening’s playbill, number about 10 and are conspicuously led by the publishing and retail corporations themselves. Penguin Random House and Barnes & Noble are listed as gold sponsors; Amazon’s Literary Partnership and Lindenmeyr Book Publishing Papers are among the silver sponsors; and Hachette Book Group and HarperCollins are in the bronze category.

When Mulzet, the translator of Krasznahorkai’s Baron Wenckheim’s Homecoming, made her acceptance speech, she praised the broad community of high-caliber translators working in the United States today and thanked the foundation for creating its translated literature award, now in its second year, at a time when “every day seems to bring more barriers” amid the political hostilities at play.

By contrast, she said, translation is a “freedom-centric labor, acquainted with another kind of beauty,” as is much of the work recognized by this foundation that’s now looking for stronger support from the business, art, and community it serves. 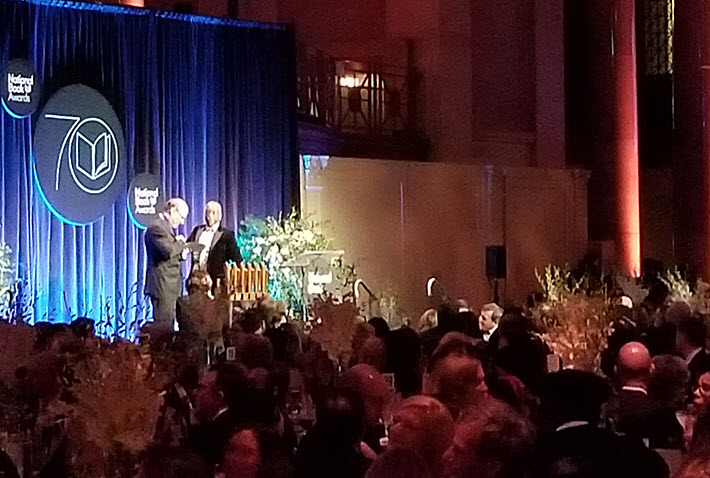 Author and bookseller Ann Patchett, in her introduction of Oren Teicher, gamely had touched on publishing’s community, as well, pointing out that while she and other independent booksellers in the States know very well the 30-year American Booksellers Association (ABA) leadership roles Teicher has held, “Anybody else you asked might say, ‘Who?'”

In accepting his Literarian Award for Outstanding Service to the American Literary Community, the outgoing CEO of the American Booksellers Association (ABA), called his past three decades with the organization a “dream job.”

He accepted the honor—one of the program’s two lifetime achievement awards—”on behalf of the thousands of indie booksellers who perform that special act of magic of placing the right book into a reader’s hands,” he said.

Appointed to the position of associate executive director of the booksellers association in 1990, Teicher will retire at the end of this year. “Because of my years at ABA, I have a good friend in every town and city in America, let alone around the world,” he told the awards audience. 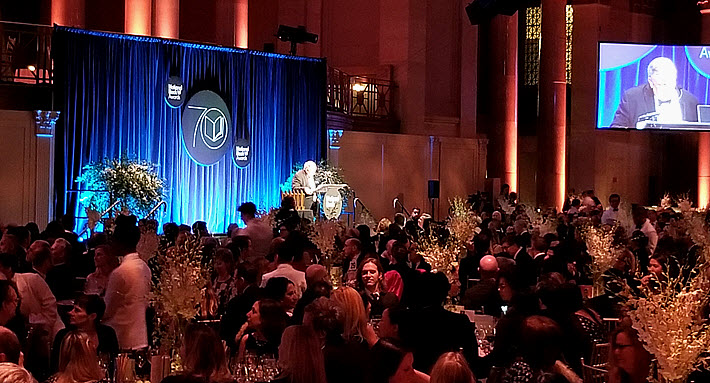 As Publishing Perspectives readers know, the second career-achievement honor of the night went to Edmund White, a near legend in gay literary circles for his 28 works of fiction and nonfiction chronicling mid-20th-century American gay life. White is the recipient of the 2019 Medal for Distinguished Contribution to American Letters .

In his ribald introduction of White, filmmaker John Waters referred to the writer as “an AIDS activist, an AIDS survivor, and he still loves sex.”

“In our culture, we ignore beginning writers and award the experienced excessively.”Edmund White

“In our culture, we ignore beginning writers and award the experienced excessively.”

The audience was primed by Waters’ campy riff on his longtime friend, part-roast and part-rave, peppered with one-liners: “Reading is the perfect fetish when Edmund White is your literary top.”

Musing on what “wisdom he could share with kids” if White turned his talents to writing children’s books, Waters recalled a line from their own younger years. “I used to always say, What do you want, a medal?”—and then proceeded tonight to give White one, to cheers from the crowd.

White’s own remarks were light, winsome, and full of wonder for how when he’d started writing gay material pre-Stonewall, it was considered wrong, while after 46 years of writing, storytelling today about and including gay life is in good supply.

And, despite having “more awards than Meryl Streep,” as Waters put it, White had an important observation on how long it can take even for publishing to embrace its own.

“In our culture,” White said, “we ignore beginning writers and award the experienced excessively. When I started submitting novels in the pre-Stonewall 1960s, my subject matter was offensive, especially since I didn’t write about us as criminals or drag queens, but rather about the middle class guy sharing an office with you.

“The familiar is more threatening than the exotic,” White said. 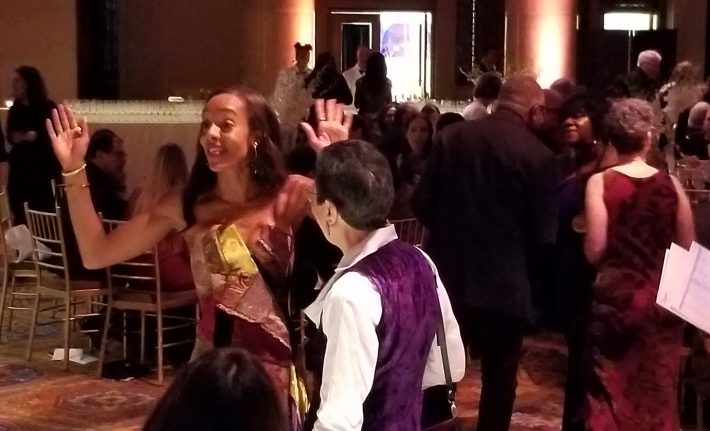 More from Publishing Perspectives on the National Book Awards is here, and on awards programs in general is here. More of our extensive coverage of translation is here.