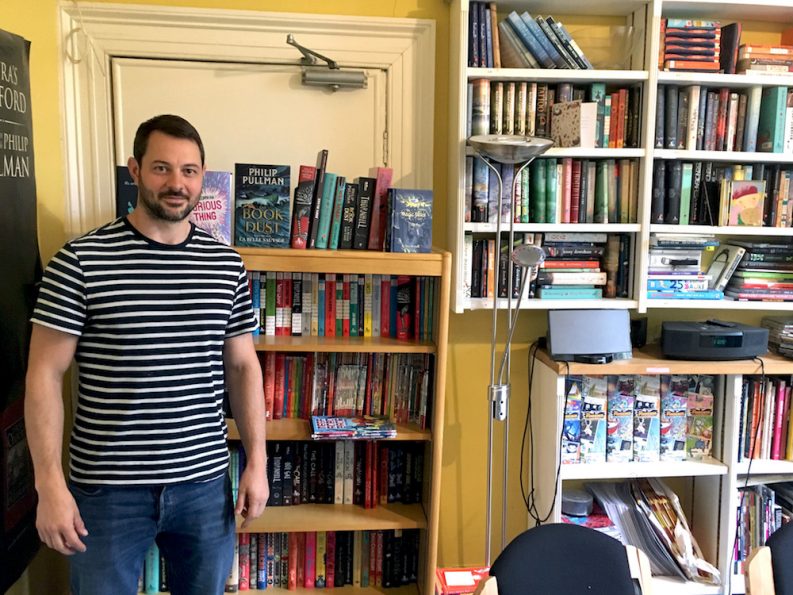 As the new MD of David Fickling Books, Tom Fickling finds himself the publisher of one of the UK’s most successful authors, Philip Pullman, and a partner of publishing giant Penguin Random House. 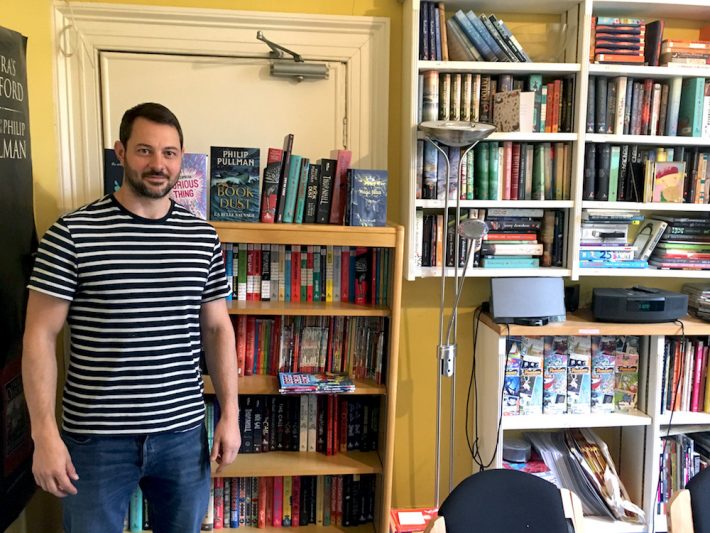 Editor’s note: Covered by The Bookseller’s Caroline Carpenter, Philip Pullman went to Alexandra Palace on October 3 to launch his new ‘The Secret Commonwealth,’ published by Penguin and David Fickling Books. As we publish our story from Frankfurt today, ‘The Secret Commonwealth’ stands at No. 12 on The Bookseller’s UK list. In the States, Amazon.com lists the book as No. 1 in Teen & Young Adult Literary Fiction. —Porter Anderson

On His Role: A ‘Completely Random Thing’

Tom Fickling, the still-new managing director of David Fickling Books (DFB), says he finds himself “this tiny, tiny independent company working with this absolute giant of publishing”—and he’s co-publishing one of the most successful franchises in British books, Philip Pullman’s new The Secret Commonwealth.

There also was the November 3 UK premiere of the BBC/HBO big-budget adaptation of Pullman’s epic fantasy trilogy His Dark Materials, with a second episode scheduled for Sunday (November 10). The US premiere was on November 4. Pullman is credited as a writer on eight of the episodes, with Jack Thorne.

At Frankfurter Buchmesse, trade visitors found the Oxford-based David Fickling Books in Halls 5.1 and 6.1. And that “absolute giant” co-publisher, Penguin Random House, was of course in Hall 6.2.

The reason that Fickling is “suddenly” Pullman’s publisher—after being in charge for years of Phoenix Comics—is that in January, he was made managing director of of his father’s Fickling Books, which publishes Pullman.

Fickling’s father—David Fickling—”has been Philip’s editor for a long time,” says the younger Fickling, “and they trust each other. There are no clashes. No final words to be had. It’s Philip’s book, and he is the author.” Pullman is one of the UK’s biggest sellers, a true heavyweight on the international bestseller stage.

He was made a knight by Queen Elizabeth II in this year’s New Year’s Honors and  tirelessly champions his fellow writers, continually staying involved with the Society of Authors.

On Being Inexperienced: A ‘Kind of a Challenge’ 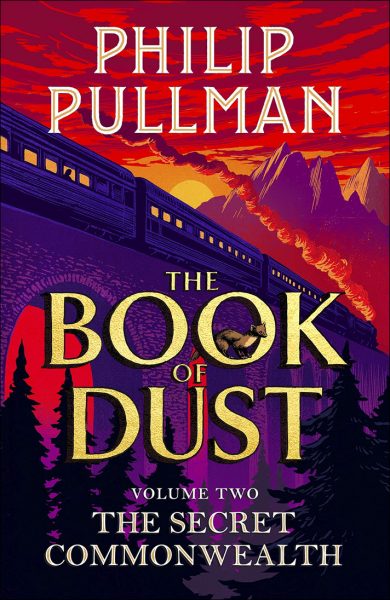 The UK cover from Penguin and David Fickling Books

If it sounds like Fickling is being shot out of a cannon, he is, in a way, but with a smoother ride than some might expect. “There’s a lot of editorial input from Random House,” Fickling says.

Fickling’s calm as PRH’s enormous marketing campaign for the new book ramps up is remarkable, given that he’s been in his new role for less than a year. He took over as managing director from Simon Mason in January. Mason is now an editor with Pushkin Press’ children’s books. Fickling remains the editor and managing director of the Phoenix, the sister company of David Fickling Books.

“I have found myself in this position through the completely random thing of being in my family,” he says with disarming honesty. “I can’t claim to have earned it in the way that some people probably have. I’m not very experienced at running companies either, and I didn’t go to business school.

“Luckily, both companies have fantastic non-execs, people who really care about what we do. And I’m someone who will sit down with anyone for some advice.

“Being inexperienced is a kind of a challenge,” Fickling says with a laugh, “but I think running small businesses is a challenge for anyone. You’re inevitably in the situation where you don’t have enough resources and you’re continually having to choose between things that you don’t want to have to choose betwe en.”

On Brexit: ‘Be Sensible About What We’re Doing’ 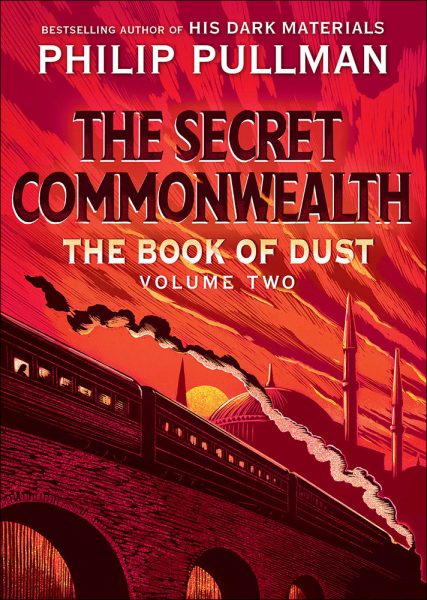 The US cover from Knopf Books for Young Readers

The size of the company might also make it possible for him to react to issues of diversity. To many people, DFB’s home base in Oxford, UK would seem the epitome of the white male world. “It is,” Fickling says, “but whenever we make an appointment at the company, we’re mindful of this. Ultimately, the best way to get people to work in publishing is for them to see people from different communities writing books.

“It’s really important to me that the company is reflective of the people reading the books.”

Fickling also says he’s hardly expecting to be “a replacement for David,” his father, still at the helm of the company. “David’s the publisher. David sets the list. He’ the lead editor on lots of the books.

“My job is to provide the environment to help him and the editorial team make the best books possible. It is basically about the good management of the company.”

Under his management the comics imprint, the Phoenix, has grown from 7,000 to 15,000 titles, he says. “We’ve now got artists working in-house. We’ve got more writers, making more of the content ourselves. But in the end, it’s still about getting kids reading. In two years’ time, I want us to be publishing in America and have a sizable subscriber base” for those comics.

And as a new managing director in the age of Brexit, defensiveness is the best route to safety, he says. “The kind of thing we can do is be sensible about what we’re embarking on. We aren’t going to go out and make a huge risky acquisition.”

And Pullman’s new book is, Fickling says, “his best ever.”

More from Publishing Perspectives on the UK market is here. More from us on Frankfurter Buchmesse is here and more on children’s books is here.