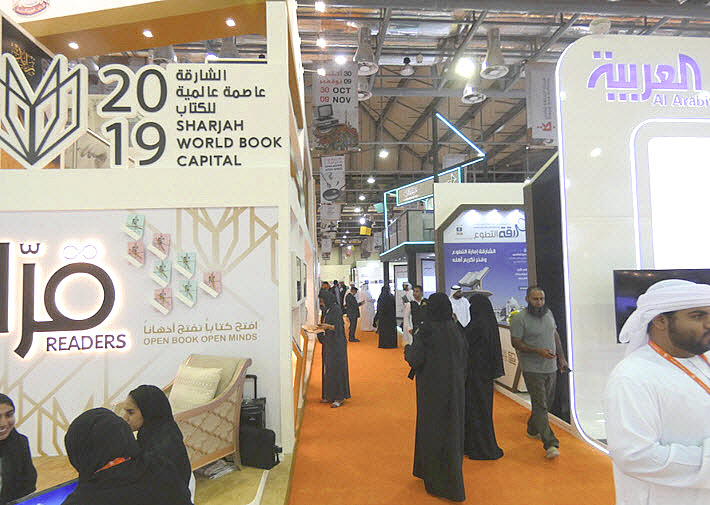 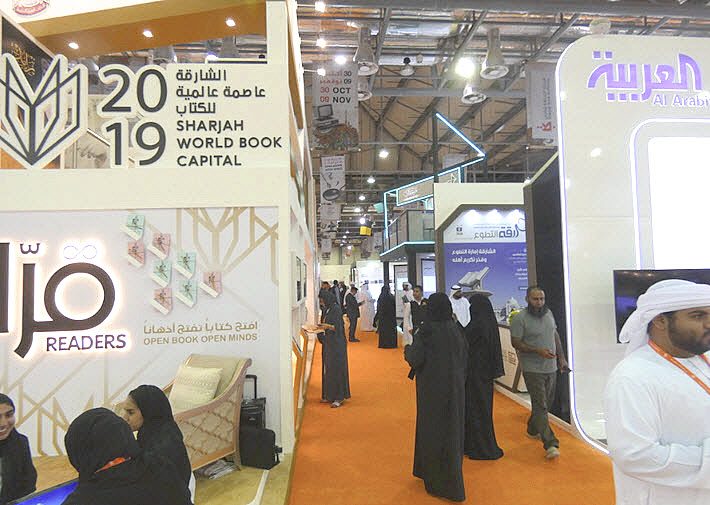 The fair, produced by the Sharjah Book Authority, was given a grant of 4.5 million dirhams (US$1.2 million) by its patron, the Sheikh Dr. Sultan Bin Mohammed Al Qasimi, earmarked for book acquisitions from exhibiting publishers to update the emirate’s library collections.

Given extra energy by this year’s designation of Sharjah as UNESCO’s first Arabian World Book Capital, the daily programming was notably beefed up in its presentation of Emirati and international authors, the total coming to just under 175 writers from 68 countries participating in 987 events that included cooking demonstrations, panel discussions, speeches, and readings.

In fact, one of the show’s highlights was a mass author signing on November 7 that the Guinness World Record folks endorsed as the largest such event in the category of “most authors signing their own book simultaneously in one location.”

Who knew there was such a category? Turkey did. A Turkish event is reported to have held the previous record, thanks to having had 1,423 authors engaged in such a signing once. Sharjah bested that figure last week with a reported 1,502 authors from the United Arab Emirates and elsewhere signing their books at once.

In a more palpable business step, the book authority’s chief Ahmed Al Ameri also signed a new partnership with Big Bad Wolf Ventures, the company born in Malaysia in 2009 with a major 24-hour book sale which has evolved since 2016 into a sales program and reading-advocacy effort that tours to Thailand, Taiwan, Indonesia, Sri Lanka, Pakistan, Myanmar, South Korea, the Philippines and the UAE.

The new agreement creates a regional office for Big Bad Wolf Ventures at Sharjah Publishing City, the emirate’s free trade zone which has plans for a new print-on-demand installation from Ingram Lightning Source, as Ingram Content Group’s senior vice president for international content acquisition David Taylor confirmed on the eve of the book fair this year.

Big Bad Wolf co-founders Andrew Yap and Jacqueline Ng were at the fair for the signing with Al Ameri, and Yap spoke about the new association’s value for his company being “enhancing our presence in the Middle Eastern and African countries,” using Sharjah Publishing City as a jumping off point into the region. Ng, as quoted in press announcements, said, “Big Bad Wolf Book Sale is not just about selling books, but a reading advocacy organization.  Purchasing a book should not be luxury item or a privilege but a right regardless of status.”

And all told, that tone of literary promotion and reading as a right echoes what the international publishing industry will see as this year’s most memorable developments in Sharjah. This year, the program defined a sharp jump forward in the emirate’s sustained efforts to leverage valuable industry relationships, boosting the place of the Arab world in the international publishing and literary community.

We can quickly look at several instances that reflect this. 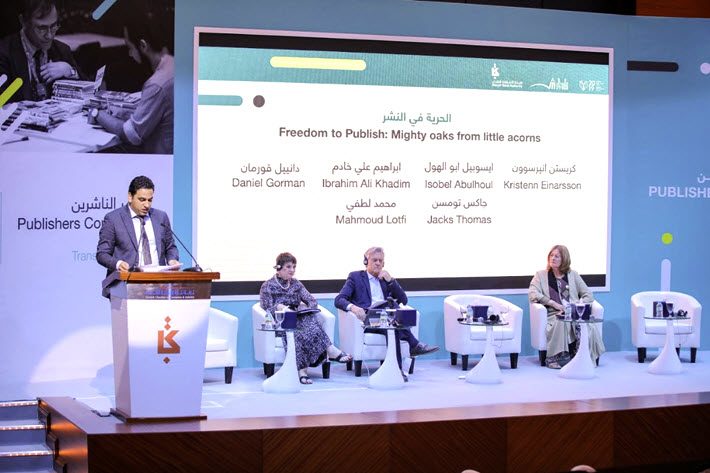 As Publishing Perspectives readers know, this year’s publishers’ conference and rights-trading program that precedes the public-facing book fair was expanded from two days to three—attendance jumping to close to 600 publishing industry players and journalists.

The new third day proved to introduce a new, more nuanced relationship with the International Publishers Association. Not only is Sharjah’s Sheikha Bodour Al Qasimi the IPA’s vice-president, on track to follow Mexico’s hardworking Hugo Setzer as president in 2021, but her leadership in the IPA’s regional conferences provided Sharjah with programming on the African markets’ publishing development.

This drew on the IPA’s Nigerian and Kenyan conferences, bringing in a host of African publishing leaders including Lagos’ Gbadega Adedapo and Nairobi’s Lawrence Njagi, the African Publishers Network’s Samuel Kolawole, Cassava Republic’s Bibi Bakare-Yusef, the Puku Foundation’s Elinor Sisulu, AkooBooks’ Ama Dadson, and the Ghanan Publishers Association’s Elliot Agyare. The highlight of that effort was the presentation of US$170,000 in grants to African publishing programs by the new African Publishing Innovation Fund created by Dubai Cares and the IPA.

In addition, of course, Bodour hosted another program in the new PublisHer networking movement for women in world publishing, creating it as a summit of programming on the theme. What’s more, a two-day educational publishing seminar on the UAE’s five-year educational plan was convened during the international publishers’ conference.

And there were several relatively less publicized sideline activities that help illustrate the array of associated events that Sharjah gathers each year to enhance and amplify the impact of its huge fair. 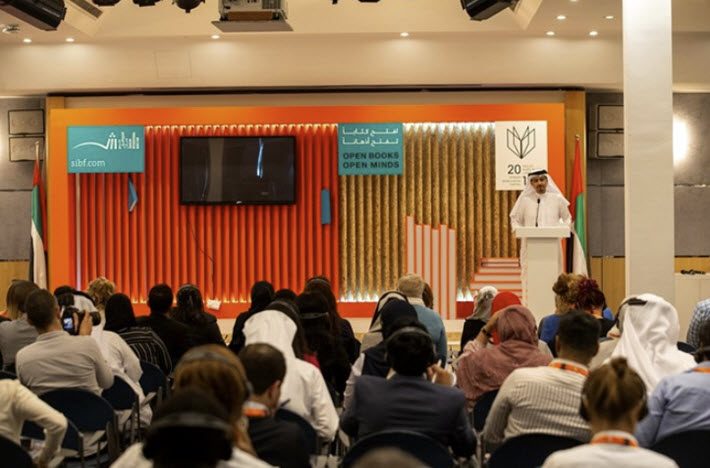 Less heavily reported was the sixth annual Sharjah Library Conference. That one flies below the radar of many international trade visitors because it takes place during the fair’s full week, opening Wednesday this year (November 6). But it’s produced in partnership with the American Library Association (ALA) and this year drew a reported 400 librarians, archivists, and related practitioners.

In her opening address with Al Ameri, ALA president Wanda Kay Brown (Winston Salem State University) positioned the conference’s theme—librarians’ need to take the lead in information economies—by saying in part, “Human service is a vocation we are best prepared for if it’s a vocation of the heart.

“When we’re passionate about what we do, we move an organization forward. We know that education is the No. 1 social mobility tool. A child who is born into poverty is likely to die in poverty. But we have a role as educators, connecting people to what they need to be successful.

“I’m asking you to strike partnerships in your own community because partnerships are essential to the work that we do. I believe librarians can help drive the movement to bring about change.” 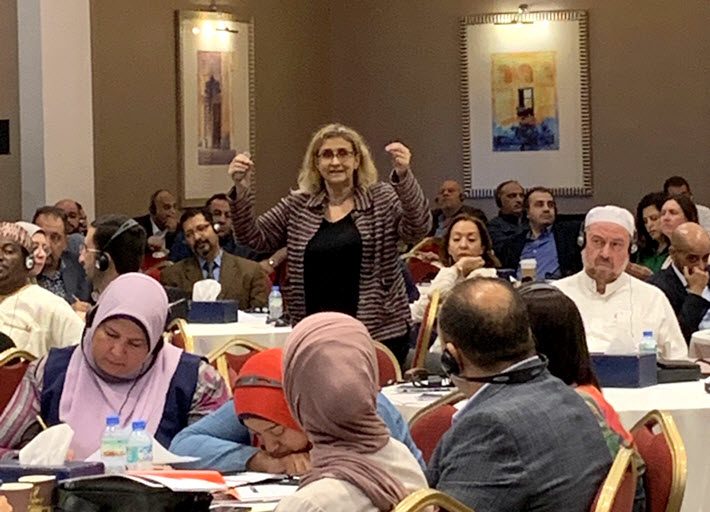 Another event less visible to the world industry—simply because it took place before the publishers conference officially opened—was the annual Publishers Training event, co-hosted by Al Ameri’s book authority and the New York University School of Professional Studies’ Center for Publishing.

“Culture is not an imported element in Sharjah’s garden of achievements. We live and breathe it every day.”Ahmed Al Ameri, Sharjah Book Authority

The NYU publishing program’s executive director Andrea Chambers coordinated the event for a sixth year, this time with a focus on what she describes as “strategies to take Middle Eastern publishing companies to a new level by adopting not only a growth mindset, but also a savvy use of ‘analytics for everyone.’”

With more than 170 publishers in attendance for the daylong event—reported to be twice last year’s level of attendance—Chambers introduced Dominique Raccah, founding CEO of the US-based Sourcebooks, to talk about “title positioning, adding channels and product lines, expanding internationally, creating stronger marketing, and connecting with audiences in new ways.”

The program also featured Keith Riegert, president and publisher of Ulysses Press in New York and an adjunct professor in the NYU program in analytics. His afternoon session, following Raccah in the morning, concentrated on entry-level analytical tools as a ramp to data-driven book sales.

Chambers tells Publishing Perspectives that specific topics of key interest were micro-targeting for sales and marketing, as well as shared growth strategies through partnerships—”a pretty spirited dialogue,” as she describes the day. 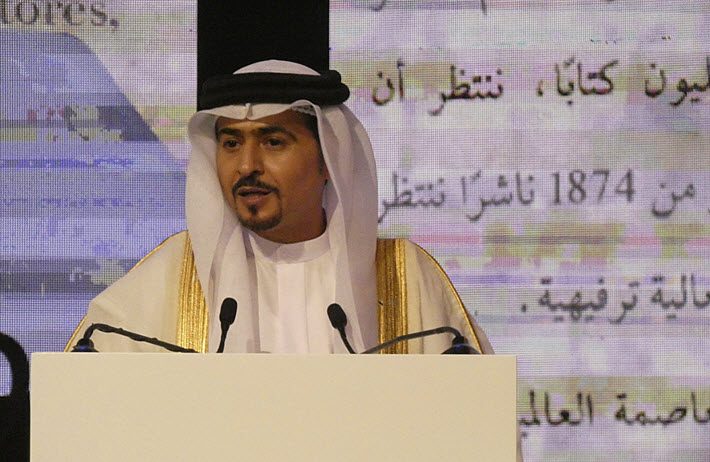 In his address to the annually opulent fair-opening assembly, Al Ameri—the book authority chair who has led Sharjah to its upcoming turn as Market Focus in March at London Book Fair—laid out four principles of how the emirate has understood its own focus on reading and literature over decades.

“First, it’s the result of our commitment to our Emirati heritage and legacy,” Al Ameri said, “which we worked in earnest to uphold and place prominently at the forefront of all projects, programs, and policies transforming it into an integral characteristic of the UAE in the global cultural arena.

“Second, His Highness was keen to revive the movement of poetry, theater and novels in Arab cities and capitals. Sharjah has thus been embracing the dreams and aspirations of Arab intellectuals. Every project needs an incubator, and Sharjah is a regional incubator

“Third, in Sharjah, we don’t think of ourselves as separate individuals, we think and act as a community. Our individuals and institutions are one, we march as one.

“And lastly, culture is not an imported element in Sharjah’s garden of achievements. We live and breathe it every day. It’s embedded in our society, economy, and inherent in our internal and external relations.”

Sheikh Sultan: ‘Culture Leads Us Into the Future’ 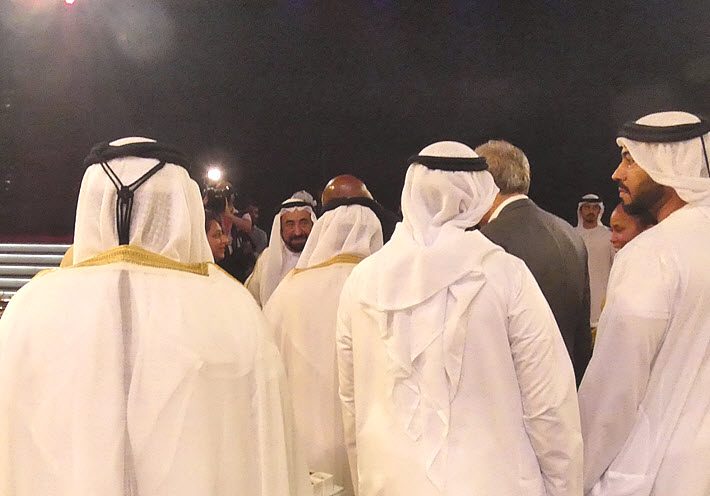 In his keynote address at the opening of the fair—during which Sheikh Sultan also presents literary awards for the year—he spoke to what a turning point Sharjah now is reaching in its maturing traction in international publishing. His comments focused on the political expediency of the course he has set, as well as on the cultural value.

“Freedom of publication and expression. It’s believed that our region lacks these values. But the truth is that culture needs freedom to grow.”Sheikh Dr. Sultan Bin Mohammed Al Qasimi

“Forty years ago,” he told the invited audience of several hundred guests, “Sharjah was not what you see today. No one foresaw the tremendous cultural achievements, which Sharjah has attained. We began with a clear vision of where we were headed, and had the determination to get there. Culture is cultivated through patience, as I have learnt personally.

“For us,” he said, “being on a vibrant and inclusive cultural path was the surest guarantee of creating stable, learned and advanced communities, of building a sustainable economy on the foundation of knowledge, science and innovation. Such lofty aspirations can never be fulfilled without the power of books and learning.”

But in choosing how to navigate his regime’s approach to its goals, he pointed out, it would be important to stress the an openness that he conceded isn’t always credited to the Arab world.

“One of the selection criteria” of this year’s UNESCO World Book Capital designation, he said “was freedom of publication and expression.

“It’s believed that our region lacks these values. But the truth is that culture needs freedom to grow. It’s like a plant; if placed in a small pot or confined, it either dies or gets stunted. We gave our plant the space it needed to grow in a way that culture would not be used to hurt society.

“We instilled responsibility in every individual, nurtured their feeling of belonging to their community. We put public interest before individual interest. We sought not to have any oppressed among us. We were keen to encourage our own cultural experience, which is rooted in our identity and Emirati heritage. We championed freedom of expression committed to public interest and inclusive development.

“Some may ask, where is Sharjah going? We are on a cultural journey that we will continue until we establish our nation’s status in a way that befits our history, heritage, and achievements, which have only given the world light and knowledge.

“Culture leads us into the future,” Sheikh Sultan said, “protects us from ignorance.

“The status of countries that have culture and knowledge will not be touched, while ignorance will bring powerful nations down, even if they had all the tools and mechanisms necessary for development.” 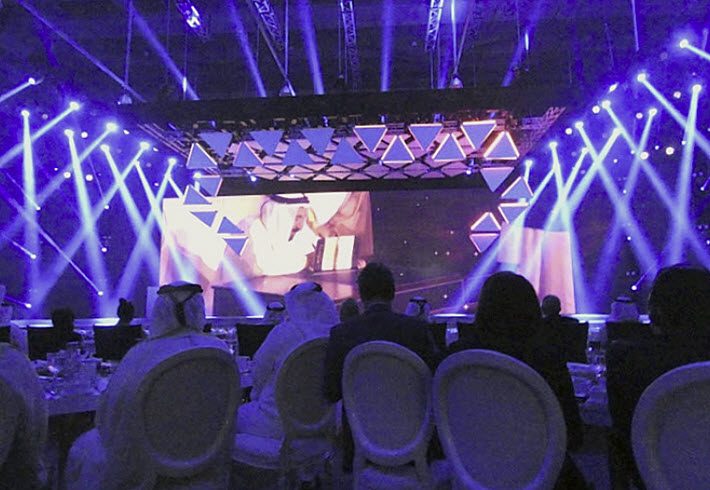 A moment in the opening light show at the 2019 Sharjah International Book Fair. Image: Porter Anderson