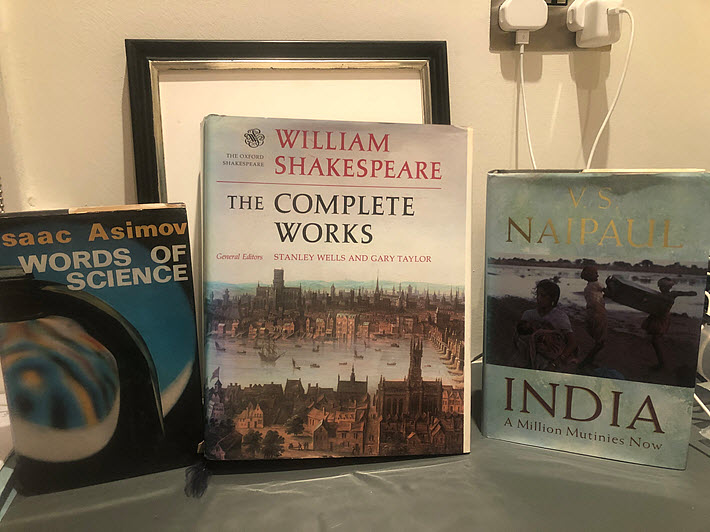 In decluttering his library, Richard Charkin is reminded of unexpected returns in publishing.

I have too many books in my house. Shelf space has run out and there are unsteady piles growing in every corner of the house. And things will only get worse as Mensch Publishing grows and I carry multiple copies of its publications. Something must be done.

The second biggest bookselling chain in the UK is Oxfam, with 150 outlets and contributing US$25 million to the charity itself, the aim of which is to alleviate hunger around the world. There are those who think it also damages the independent book trade but I support them anyway, and they’re the solution to my domestic book crisis.

In the process of this culling, I tripped over these three books–badly photographed in-situ—and thought I’d share some background about them.

Shortly after I started working as science editor at the family firm of George Harrap (182-4 High Holborn) in the early 1970s, I was offered UK rights in two Isaac Asimov books, Words of Science and More Words of Science.

A not very great moment of inspiration led me to deciding to create a single volume in alphabetical order. Not a terrible idea, but it took a bit of editorial time and of course made for a rather larger book. In those days, and maybe even now, pricing was a mysterious art only to be undertaken by qualified bean counters.

Before we began work on the book I was told that all would be well because a print run of 5,000 would allow a price of £3 [US$3.86], the most the book could stand. However, when we were ready to print, it transpired that my accounting colleague had counted the beans incorrectly and the price would have to soar, thus killing sales and possibly losing me my job.

I moaned about my predicament to a former colleague, Michael O’Mara, who was later to found the eponymous and prosperous Michael O’Mara Books. He had recently moved to Book Club Associates, and he offered the simplest solution. He’d buy 10,000 copies for one of the clubs and my sums would work. He did and they did. I was rescued.

Moral of the story: Do the sums yourself and stay in touch with former colleagues. You never know when they might help. Unfortunately George Harrap didn’t survive beyond the 1980s.

The second, the rather larger and more important book, The Oxford Shakespeare was in the editorial works at Oxford University Press when I became managing director of their academic and general division. Like all or most projects of this kind, it was running behind schedule and over budget in spite of the utterly professional and scholarly supervision of the main editor, Stanley Wells. Not only that, but the market for Shakespeare editions was and is acutely competitive. For all the academic merits of The Oxford Shakespeare, how could we persuade the general public to switch to our editions away from Arden, RSC, and others?

Late on a Friday afternoon, I ran into one of the assistant editors on the project and asked him how things were going.

I was no expert in Shakespeare matters but even I realized that an undiscovered poem by the man was newsworthy.

“How do you know it was by Shakespeare? How did you find it? Is it any good?”

The answers were, as I recollect, that it was signed W. Shakespeare, he found it in the card index at the Bodleian Library under “Shakespeare poem,” and it was okay but not the best thing he ever wrote.

I called the London Sunday Times to ask if they’d ever serialized a poem and would they like to have an exclusive on this one.

The editor went to London that Saturday evening to read the proofs, and the poem was published for the first time in November 1985. Oxford University Press received a decent fee for the poem. The editor had a good weekend in London with his family and built successful career in Shakespeariana.

From my point of view, we’d found at least one small distinguishing feature for our Shakespeare. Amazingly, the Complete Works edition is still in print and still has the jacket design, built to last.

Moral of the story: Always ask colleagues how things are going. You never know what might pop up.

After leaving Oxford University Press I joined Reed International. One of my first acquisitions for Heinemann entailed a very large advance for VS Naipaul’s outstanding India: A Million Mutinies Now.

This was published in 1990 during a time of rising discounts for the publishing industry, lower overheads, and a sluggish market—sound familiar?

In order to try to maintain profit margins, our production departments were asked to come up with every way of cutting costs, including cutting production values.

At Heinemann there was a real sense that we were damaging our business by reducing production standards and that we should instead enhance them in spite of their being no evidence that readers were up in arms about this.

As an experiment, I asked the production department to spare no expense on this one book–the best paper, real cloth binding, quality end papers, top and tail bands–but not to tell anyone and not to show the true extra costs, which were substantial, in the estimates.

We published. It was, and still is, a big success.

Not a single person commented on or noticed the enhanced production values. We were able to return to our lower-cost printing standards with a clear conscience.

Moral of the story: While great design and high values are important for a book, nothing is more important than the quality of its writing and its subject, and that’s what we should focus on.