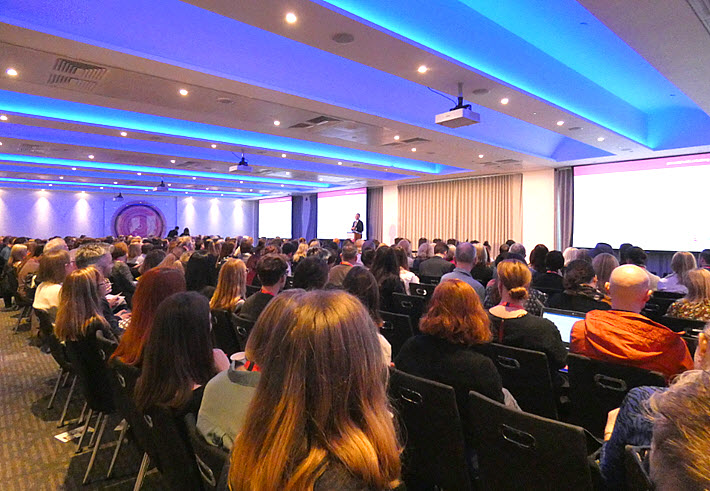 Seeing Barnes & Noble stores ‘crushed’ by the corporate ‘opulence’ of American business, James Daunt says the chain must ‘rip out the boring.’ 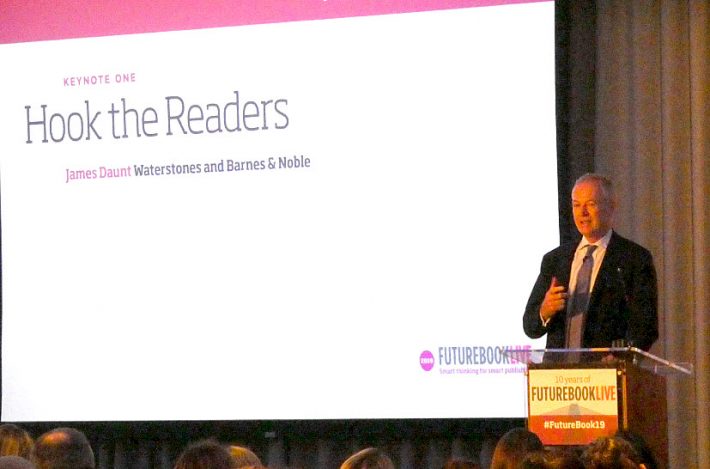 ‘It Takes a Couple of Years’

At today’s  (November 25) FutureBook Live conference in London, James Daunt has said that the vast 629-store Barnes & Noble chain he’s now overseeing in the United States must rip out what’s boring—both in stores and online—and find its character if it’s to succeed.

The FutureBook event, now in its 10th year, has drawn what organizers say is more than 500 to its programming today, speakers included, and this industry-facing conference gave Daunt a warm welcome for his show-opening welcome.

Daunt lists three elements of successful bookselling, and personality comes first. Second is also critically important, he said, the presence of an aggressively curated inventory, responsive to each store’s consumer base. And third is engaged and capable staffers, the employees many people in publishing like to believe are in each bookshop, enthusiastic and adept at helping a customer find what she or he is looking for.

While Daunt is widely credited for stabilizing and righting Waterstones’ trajectory in the market, many in the business have of course worried that trying to helm both Waterstones and the American counterpart Barnes & Noble is too tall an order.

Time, of course, will tell ow successful Daunt can be in this two-headed challenge on either side of the Atlantic.

There are those here in London who worry that Waterstones, having gained traction, could see slippage if too much of Daunt’s energy goes to Barnes & Noble. And some in the States worry that his experience, however reassuring in the British market, may not be replicable in the sprawling, exhausted network of Barnes & Noble stores, a system three times the size of Waterstones—which has 283 stores—and set in the less cohesive market and reading culture of the States.

The biggest difference in bookselling in the States and in the UK, Daunt told a questioner in the audience, is that there are far fewer bookstores. And the profession of bookselling in America has taken a considerable hit over the years, he said.

“Unfortunately, Barnes & Noble degraded the career of a bookseller,” as he put it, and he sees part of his mission to be re-establishing the importance of booksellers in the American stores and giving them the authority of local curation, something he’s known for doing at Waterstones.

Asked by The Bookseller editor Philip Jones what success will look like at Barnes & Noble, Daunt’s answer was to ask for some patience. “It takes a couple of years to get a bookselling team turned around,” he said, “so it will be 2021 or 2022” before the real effects of his efforts to redirect the long-flagging company can be discerned.

The 2019 FutureBook Live conference at 155 Bishopsgate in London is a near sellout at more than 500 including speakers. Image: Porter Anderson

As Publishing Perspectives readers know, Daunt was made the new chief of Barnes & Noble—while retaining the Waterstones assignment—in early June when Elliott Management paid a reported US$476 million for Barnes & Noble, after buying Waterstones in 2018.

Not mentioned in the morning session here at London’s 155 Bishopgate conference center was the lawsuit filed in the States against Barnes & Noble five days ago (November 20)  by former Barnes & Noble employee Barbara Tavres, 59, in the US District Court in Northern California, seeking class action status and alleging age discrimination.

Tavres was told she’d be dismissed in September, and the court filing clearly looks to connect her experience to an idea that Daunt’s plan includes youthening the chain’s workforce.

From the filing: “In its effort to avoid growing ‘stale’ and to foster its ‘shiny and new’ public image, Barnes & Noble determined that these older workers no longer looked the part. To accomplish this goal, Barnes & Noble engaged in a campaign of age discrimination. It terminated its employees age 40 and older and replaced them with a younger workforce. And in doing so, Barnes & Noble violated these workers’ rights to be free from age discrimination in
the workplace under both federal and California law.”

As Michael Cader has written it up in New York at Publishers Lunch, “The suit … says the company’s behavior is at odds with new CEO James Daunt’s well-publicized intention to focus on and elevate the authority of local booksellers. ‘However much the financially-beleaguered company emphasized “bookseller” empowerment, the tailoring of stores to meet the needs of their communities, and the battle against uniformity, its cost-saving strategy coincided with and depended on the ruthless and unscrupulous purging of its workers age 40 and older in violation of federal and California antidiscrimination laws.'”

Pending how the suit progresses, its presence and optics could create yet another barrier to the already herculean task Daunt has taken on, trying to breathe new life into a long diminished retailer which he describes as having a kind of crushing “opulence.” 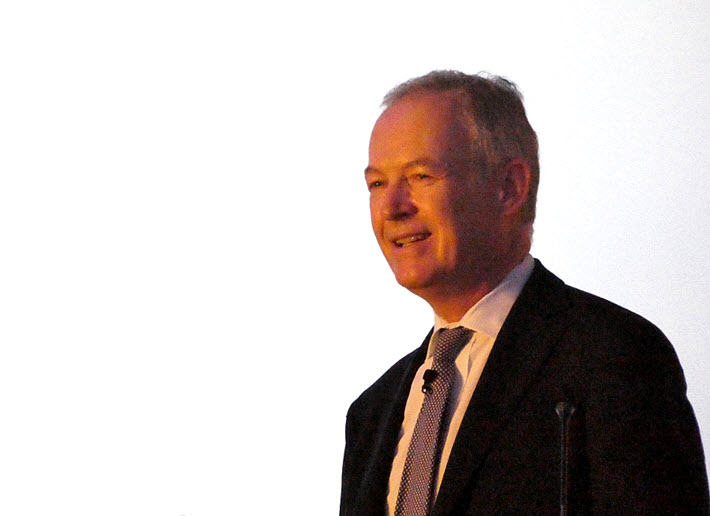 As affable and forthright as he’s known for being, Daunt pointed out that Barnes & Noble has long had a loyalty program with at least 7 million members registered. That program should feed shoppers’ information into the company, supporting customization to the consumer base of a given store.

And yet, despite this brace of identifiable, actionable content in hand, he said, the individual stores seem to have been given little ability to tap into the program’s user information.

“In the age of Amazon, you can’t afford to be boring.”James Daunt

Daunt’s approach is, as he said it at FutureBook, “How do you create an environment that’s intellectually satisfying—and not in a snobbish way, but in the sense of feeding your mind?”

At one point, Daunt noted that he was referring frequently to Amazon. But, as he reminded the audience, a bookselling corporation of the size of Waterstones or Barnes & Noble has only one competitor, and that’s Amazon.

Notably, he offered no heavy criticisms of Seattle, and instead recognized some of the things it does well.

Amazon’s site, he said, can be boring, just as Barnes & Noble’s can, but Amazon’s system helps a consumer “find and get a book with utter efficiency,” that industry-leading level of Amazonian customer service that the Barnes & Noble online operation has never managed to emulate.

“In the age of Amazon,” Daunt said, “you can’t afford to be boring.”

But most of his comments, understandably, were reserved for the hundreds of physical stores of the long-staggered Barnes & Noble presence in the American market.

And what will, in fact, make developments around the new lawsuit interesting is how much of his concept for the future of his new behemoth bookselling chain is going to depend on achieving a committed, thoughtful, and energetic approach from the staffers.

“They’re going to have to rip out the boring,” James Daunt said, to reimagine how each store of the faded Barnes & Noble empire can find a place in its own in the American bookselling landscape.