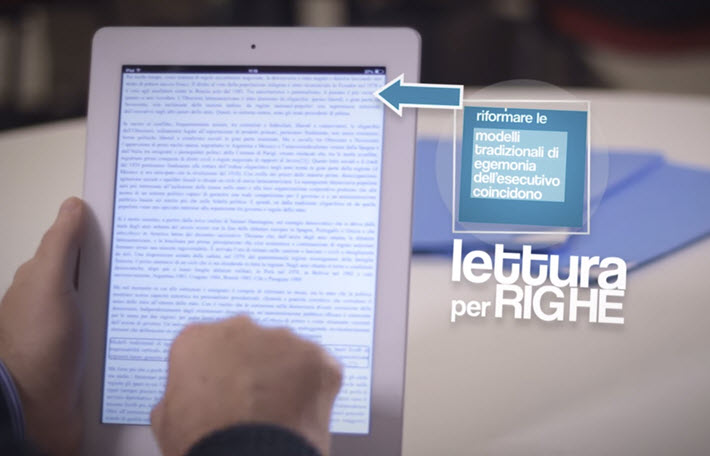 With the cooperation of some 80 percent of Italy’s publishing companies, the new Fondazione LIA program is establishing accessible publishing standards.

In this image from its explanatory video, the LIA program–Libri Italiani Accessibili—reads aloud to an ebook user by lines. The system can also read aloud one word at a time or in a continual reading format. Image: LIA

On Friday (November 22), a special session at the industry-facing Publishing Fair in Torino will feature an introduction to the new program referred to in Italy as “LIA” for Libri Italiani Accessibili, or Accessible Italian Books.

Friday’s 4:30 p.m. session in Torino is titled “Designing for All: The Importance of Creating Publications and Accessible Sites.” The program is presented by Fondazione LIA, led by the foundation’s chief accessibility officer Gregorio Pellegrino and projects manager Elisa Molinari.

They’ll brief attendees on the Marrakesh Treaty—one of the World Intellectual Property Organization‘s (WIPO) most quickly successful accords—and Europe’s legislation in accessibility. Special attention will be given to the needs of visually impaired and dyslexic readers, to what digital publishing today offers to publishers in response, and to the guidance and support now coming online as the new LIA initiative gains traction.

What’s afoot here is familiar to readers of Publishing Perspectives who know the work in the United States of Benetech and its “Global Certified Accessible” accreditation. The now-familiar phrase “born accessible” is part of the movement among a rapidly widening cohort of publishers, as we explored, for example, in our coverage in April.

In fact, Fondazione LIA’s work is aligned with that of many of the international publishing community’s leading entities in the field, including the DAISY Consortium, Readium, WIPO, the Federation of European Publishers (FEP), and the Book Industry Study Group (BISG).

Rolled out near the end of the summer, Italy’s LIA already has attracted new membership from the Associazione Italiana Dislessia (AID), the country’s leading association for people living with dyslexia, and the country’s key advocacy organization attached to the Italian Library for the Blind—the Biblioteca Italiana per i Ciechi  “Regina Margherita” di Monza (BIC).

These are considered highly valuable new liaisons for the fledgling program, representing the endorsement of some of Italy’s largest communities of readers who may need support in reading, and the leadership of the Associazione Italiana Editori (AIE)—the Italian publishers association proudly observing its 1869 establishment, a 150-year anniversary—has been quick to signal to its membership and the Italian consumer base its approval.

AIE is behind the creation of Fondazione LIA, in association with UICI, an umbrella service organization for visually impaired citizens.

“Thanks to the work done over years” of preparation for the new program, says AIE’s president Ricardo Franco Levi, “Foundation LIA today offers to people with visual impairments the chance to choose from more than 24,000 titles, including bestsellers, winners of literary prizes, children’s books, and high-quality essays. It features our largest catalogue of ebooks, created as ‘born accessible’ and available at the international level.”

Levi says that the creation of Fondazione LIA has been made with the collaborative participation of 76 publishing brands, a response that represents better than 80 percent of the fiction and nonfiction Italian market.

And you can get a look at the content catalogue he refers to here.

Mario Barbuto, who has spearheaded the LIA liaison with UICI, is quoted in a prepared statement, saying, “Starting from today, people with print disabilities will enjoy expanded opportunities to access books, culture, and knowledge. This represents not only a vast catalogue of accessible titles, but also the commitment of institutions that provide accessible adaptations of books, in our new alliance between publishers and readers aimed at overcoming physical and technical barriers that may hinder the full rights of equality among all citizens.”

The newly signed organizations’ chiefs are issuing statements, as well. For the Italian Dyslexia Association, its president, Sergio Messina, is quoted, saying, “We are proud to be part of the LIA Foundation, with the aim of working together to ensure inclusion and the right of access to people with reading disabilities and reading disorders as well, starting from our own strong expertise in this field and now developing new projects together.”

And the president of Biblioteca Italiana per i Ciechi, Pietro Piscitelli, says, “Our presence among the international agencies embraced by the LIA” reflects his organization’s intent to “create and develop every possible synergy to face new challenges that technology offers to visually impaired people—for a true social emancipation. In our opinion, the LIA Foundation is today the best-accredited reality to allow those who want a culture without barriers to work together on shared goals.”

The Right ‘Above All, of What To Read’ 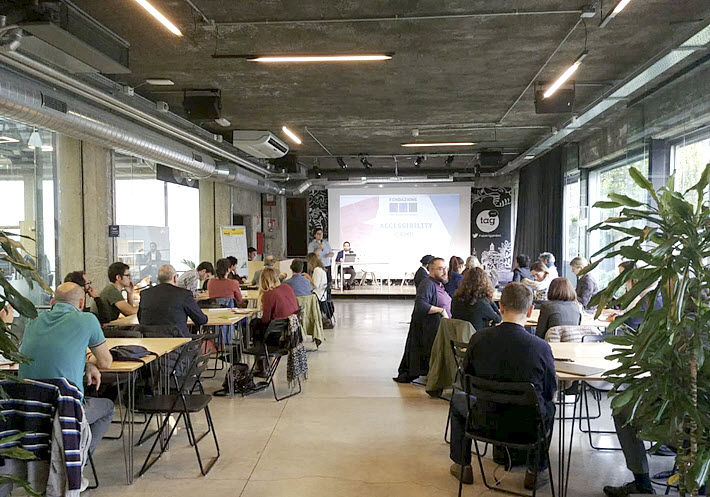 The ultimate goal of Fondazione LIA is described as “allowing all people with visual impairments and difficulties in reading printed books to choose how, when, and, above all, what to read, thus encouraging their social integration and active participation in the world through access to culture, education and work.”

And to that end, the foundation’s board of directors has named a first scientific committee to support and guide LIA in its development going forward. 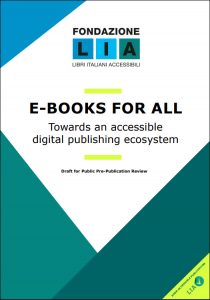 The inaugural members of that new scientific committee are:

Fondazione LIA has issued an extensive 42-page white paper, “Ebooks for All: Towards an Accessible Digital Publishing Ecosystem” as a draft to which interested parties are welcome to respond.

You can register to receive a free copy of the white paper here.

And below, we’ve embedded the program’s 6.5-minute video—which has English subtitles available—outlining the concepts and details of Fondazione LIA’s mission and of “born accessible” publishing and what it can mean for reading-impaired users.

Additional notes of interest on Torino’s Publishing Fair programming at the end of this week:

More from Publishing Perspectives on accessibility for readers is here, and more of our coverage on the Italian market is here.