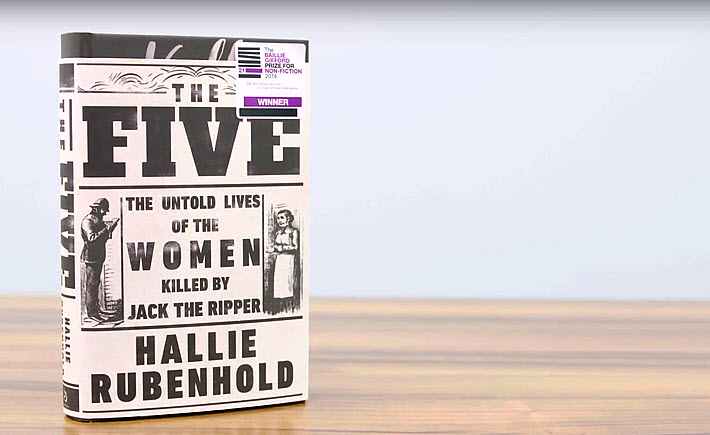 Hallie Rubenhold wins the 2019 Baillie Gifford Prize for her book, ‘The Five,’ which seeks to restore the reputations of the 1888 victims of Jack the Ripper.

At London’s Science Museum tonight (November 19), the author, broadcaster and historian Hallie Rubenhold has won this year’s the £50,000 (US$64,657) Baillie Gifford Prize, one of the major plums of the English-language nonfiction awards season.

Rubenhold’s winning book is The Five: The Untold Lives of the Women Killed by Jack the Ripper from Penguin Random House’s Doubleday in the UK (February 28) and from Houghton Mifflin Harcourt in the States (April 9). The audiobook edition of the title already is available from Audible in both the USA and UK, with narration by Louise Brealey.

Rubenhold’s book is intended to refute the long-accepted reports that the serial killer known as the Ripper preyed on prostitutes. All were killed in 1888, and as promotional copy for the work has it, “Polly, Annie, Elizabeth, Catherine and Mary-Jane are famous for the same thing, though they never met. They came from Fleet Street, Knightsbridge, Wolverhampton, Sweden, and Wales. They wrote ballads, ran coffee houses, lived on country estates, they breathed ink-dust from printing presses and escaped people-traffickers.” 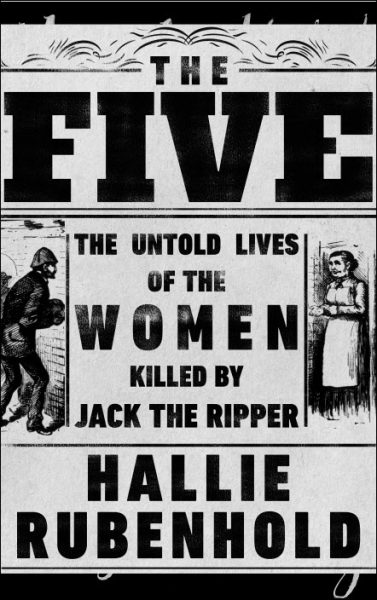 The book is being praised this evening by jury chair Stig Abell—editor of the Times Literary Supplement—who says, “This book seemed to synthesize all that we were looking for in a winner, indeed in any great book. At a simple level, it was beautifully written and impressively researched; and more broadly it spoke with an urgency and passion to our own times.

“Brilliance meeting relevance. It is a book we would all give to a friend for Christmas, knowing that they will have finished it with pleasure by New Year’s Day.”

And Mark Urquhart, a partner at the prize’s sponsor—the Edinburgh-based investment management partnership—is quoted in media messaging, saying, “The quality and variety of the shortlist is remarkable, challenging our political, social, and historical perspectives and expanding our understanding of the world. 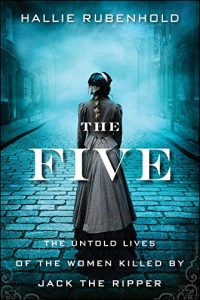 US cover art from the Houghton Mifflin Harcourt edition

“Nonfiction writing is in a great place and we are proud to support this important literary award. Congratulations to Hallie Rubenhold. Reading her extraordinary book or any of the books shortlisted is time well spent.”

Each of the shortlisted authors gets £1,000 (US$1,294). Rubenhold’s shortlisted colleagues are:

Rubenhold has worked as a curator for the National Portrait Gallery and as a university lecturer.

Her books include Lady Worsley’s Whim, dramatized by the BBC as The Scandalous Lady W, and
Covent Garden Ladies: The Extraordinary Story of Harris’s List, which inspired the ITV series
Harlots. She lives in London with her husband.

Tonight’s awards program is made possible by support from the Blavatnik Family Foundation.

Social media reactions to the news of the Rubenhold win can be found on hashtag #BGPrize2019.

In 2016, Baillie Gifford, the Edinburgh-based investment management partnership, became the sponsor of the program, and the award was renamed the Baillie Gifford Prize for Nonfiction—and this year it has had a big boost in payout, a jump from  a £30,000 win last year to a £50,000 award this year.

The program has released a video with jurors’ comments about the winning title and Rubenhold’s work.

Following tonight’s presentation of the Baillie Gifford in London, the next big stop for nonfiction fans will be on Wednesday evening (November 20) at the US National Book Awards, which include nonfiction as one of that program’s five award categories. Our interview with National Book Foundation executive director Lisa Lucas—in which she discusses some aspects of the current popularity of nonfiction—is here.

More from Publishing Perspectives on publishing industry awards is here, and more from us on nonfiction is here.