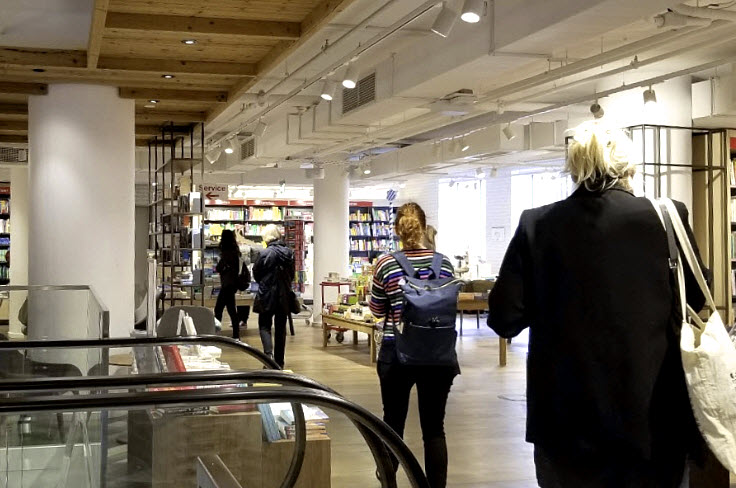 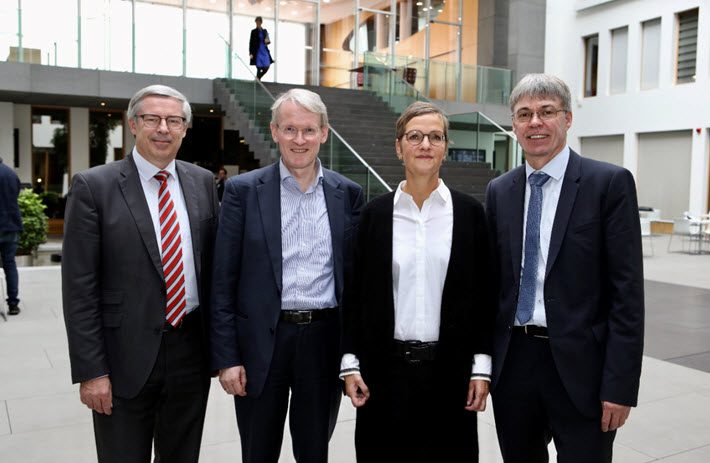 A new defense of Germany’s fixed prices for books has been issued this morning (November 8) by the Börsenverein des Deutschen Buchhandels—the country’s publishers and booksellers association.

In 2018, the Börsenverein commissioned new research on the issue—described as a team of economists and a legal scholar—to study what the organization today calls “the impact and legitimacy of Germany’s fixed book price system in an independent and comprehensive manner using the most up-to-date information possible.”

At a news conference in Berlin today, the results of the study have been presented by Georg Götz, a professor of economics at Justus Liebig University in Gießen; Andreas Fuchs, managing director of the Institute for Business and Commercial Law at Osnabrück University; and Alexander Skipis, the Börsenverein’s managing director. They were joined in the presentation by bookseller Annerose Beurich of Hamburg, who is also a Börsenverein board member.

For some brief background on the issue, fixed prices on books in Germany have long been a tradition and were codified in law in 2002. The effect of the fixed price is that a book—whether sold online or in a physical retail setting—has exactly the same price nationwide. A publisher sets the price for its books in each format. After 18 months, that publisher can cancel the fixed price, and discounting is allowed in cases of defective copies or bulk pricing.

As today’s media messaging points out, 13 European countries have fixed pricing on books, and those nations include Austria, Spain, Italy, the Netherlands, Norway, and Hungary. Outside of Europe, books are sold on a fixed price system in markets including Mexico, Argentina, and Japan. 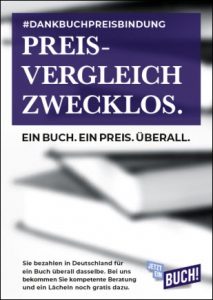 And as it turns out, the Börsenverein’s study is a kickoff to a campaign hashtagged #dankbuchpreisbindung, or “thank fixed book prices.”

The organization is offering posters, site banners, email signature graphics, and other collateral materials to spread messages—in bookstores and other venues—such as “Price Comparisons Are Futile” and “We Have More [Books] for the Same Price.” This signage also reads, “You pay the same for a book anywhere in Germany. With us you get competent advice and a smile for free.”

All of this makes it seem that many consumers in Germany may not know that books are sold at fixed prices and need such graphical signals to understand.

And the release of the new pro-price-fixing report today—in news reports characterized as costing some €300,00—is an answer, in part, to a report from the country’s Monopolies Commission which, in 2018, recommended discarding fixed prices on books. In very general terms, the commission’s opinion last year indicated that price fixing wasn’t based on a clear demonstration of its value and was out of step with contemporary market dynamics. 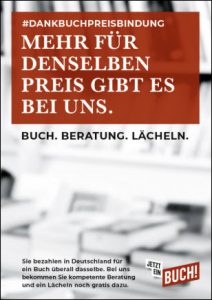 An earlier precedent for questioning the book industry’s fixed prices in Germany was seen in a European Court of Justice opinion that, in 2016, indicated that a fixed price on pharmaceuticals was limiting to the unfettered flow of products. Books, so the thinking went, could be subject to the same rationale, and to some degree, the newly released research project can be seen as an effort to get ahead of such comparative thinking.

And this is not, of course, the first time that the fixed price has been called into question. In 2007, for example, The New York Times critic Michael Kimmelman was at Frankfurter Buchmesse and wrote of the “German Border Threat: Cheap Books“—a situation arising when Switzerland green-lighted the discounting of German books.

So it is that the Börsenverein’s effort today, addresses both issues, advocating the fixed price as a positive for the German market and as a good fit with European Union regulations.

The key statement issued today by the Börsenverein is: “Germany’s system of fixed book prices and the extensive landscape of bookshops it supports play a key role in the dissemination of books as essential cultural goods, while also fostering the quality and variety of books available to consumers. The system is also in line with EU law.”

What follows, then, is the researchers’ assertions to support the Börsenverein’s all-in vote of confidence in the fixed price.

In a prepared statement, Skipis is quoted, saying, “Once again, it’s all there in black and white. Germany’s fixed book price system acts as a guarantor of quality and diversity on the book market.

“It’s one of the factors contributing to Germany’s reputation as a role model across the globe and its status as the second-largest book market in the world.

“For almost 150 years now, Germany has had a system of fixed book prices. The system guarantees a dense network of bookshops that act as key locations for the dissemination of literature and as indispensable distribution channels, especially for small and medium-sized publishers. Precisely because of this key role, price fixing for books is also widely supported in the political sphere.”

Beurich, the bookseller, adds, “The research findings show how indispensable the stationary book trade is, especially for cultural diversity in our country. When bookstores disappear, people lose important contact points and thus access to books. Bookstores are places that foster exchange among local residents, while also promoting literary education, cultural work, literacy and a love of reading.

“The study also showed that a number of highly interesting books and authors would never have been discovered without stationary bookstores.”

Key Messages From the Börsenverein on Fixed Book Prices 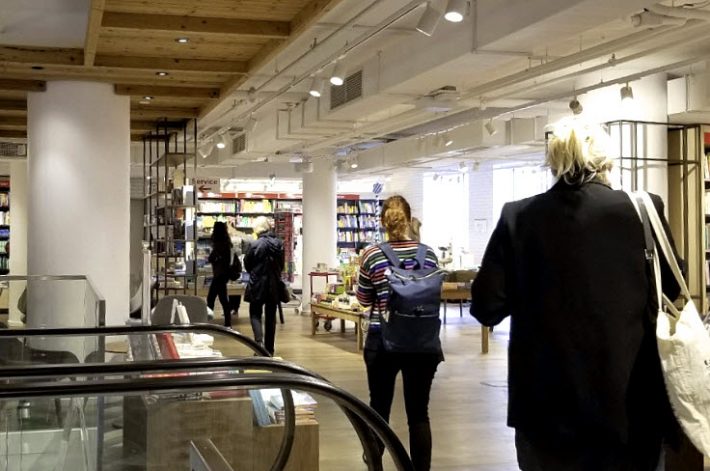 Inside a Hugendubel bookstore in Munich. Image: Porter Anderson

The research report from Fuchs to be released next year in book form and Götz’s work is expected to continue, with essays released to academic journals on an ongoing basis.

Today, the key assertions being emphasized by the Börsenverein and reflected in its research follow. Our quotes are from today’s Berlin presentation, and we begin with the Götz economic report.

“Germany’s system of fixed book prices helps to sustain a broad network of independent bookstores. While the number of independent bookshops in the UK fell by roughly 12 percent between 1995 and 2001 after the abolition of the system of fixed book prices there, Germany saw a decline of only 3 percent in the 1995 to 2002 period.

“In addition, Germany also has a much lower market concentration. In the UK, Amazon alone has a market share of roughly 45 to 50 percent, whereas small bookshops have only around 5 to 10 percent. In Germany, the online book trade accounts for only roughly 20 percent of sales, while roughly 30 percent is generated at independent bookshops and roughly 20 percent at chain stores.

“The stationary book trade raises demand for books. Consequently, when bookshops close, there is a clear decline in book sales.

“When a bookshop closes in Germany, an annual average of roughly 6,100 fewer books are sold. That means that there is only a partial migration of book buyers to online trade and ebooks. A total of roughly 3.5 million fewer books were sold due to the closing of bookstores nationwide in the period from 2014 to 2017. This corresponds to roughly 56 percent of the total decline in sales.” In fact, the decline in book sales in Germany doubled between 2014 and 2017 as a result of the impact caused by the closure of bookstores–2 percent rather than the hypothetical 1 percent that would have occurred if the number of bookstores had remained the same.

“Fixed book prices make books less expensive on average. Following the abolition of the system of fixed book prices in the UK, the average price of books there rose by 80 percent between 1996 and 2018. The increase was much stronger than in the same time period in countries that have fixed books prices, such as France (+24 percent) and Germany (+29 percent).

“Only bestsellers are less expensive in the UK than in Germany. With roughly the same share in overall sales, the 500 top-selling books make up roughly 26.6 percent of total revenue in Germany; in the UK, they make up 21.5 percent of total revenue. The analysis of the 50,000 best-selling books in the UK from 2005 to 2018 showed that the higher the sales rank a book has, the higher the average discount retailers offer on the publishers’ suggested retail price, and therefore the less expensive the book will be for the client.

“Fixed book prices foster the sale of titles beyond bestsellers. In Germany, the demand for books is more widely distributed across the entire range of titles. For example, titles ranked between 15,000 to 50,000 in terms of revenue have a 20.5-percent share of the books bought in Germany, which is significantly higher than in the UK, where it’s a 15.3-percent sales share.

“The stationary book trade fosters the discovery of unknown titles and authors. The studies showed that sales at stationary bookshops foster the future success of a large number of lesser-known titles and authors. Out of 420 fiction titles that did not reach the top twenty spots on the bestseller lists until after three weeks or more between 2011 and 2018, sales in local bookshops were solely responsible for that rise in 237 cases (56.4 percent) and largely responsible for that rise in the case of 171 other titles (40.7 percent).”

On that last point of the German system and EU law, Fuchs’ report says, “Germany’s fixed book price system does not adversely impact on the practical effectiveness of EU competition law. It also does not fall under any of the cases recognized by the European Court of Justice as part of its so-called effet utile doctrine with regard to a violation of the loyalty obligation of member states.

“Even if the European Court extended its jurisdiction in the future and expanded it to include state measures without linking them to any anti-competitive behavior on behalf of companies, the system of fixed book prices would not represent a breach of competition rules. Indeed, the positive effects of the system of fixed book prices on the market and consumers offset the adverse effects caused by the elimination of ‘product-internal’ price competition at the retail level.”

There’s more detail in the announcement made today by the Börsenverein, and you can read that full statement, in English, here. 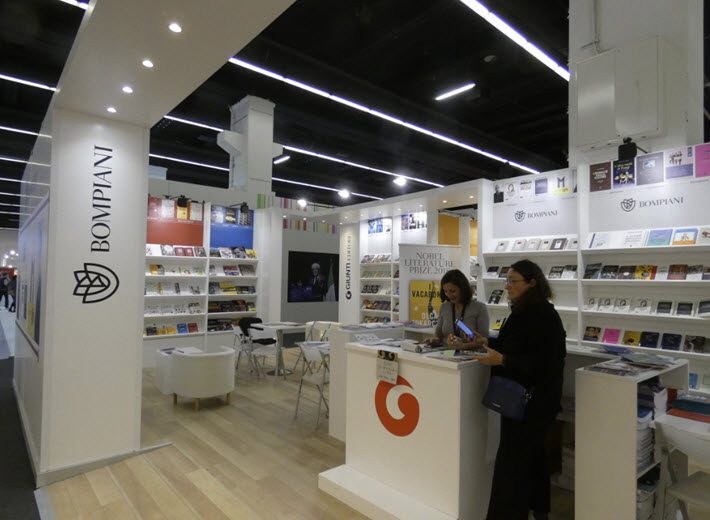 Stands from Italian publishers at the 2019 Frankfurter Buchmesse. The Börsenverein report notes that Italy, like Germany, is one of 13 European markets with fixed book pricing. Image: Porter Anderson

More from Publishing Perspectives on the German book market is here, and more from us on bookselling is here.