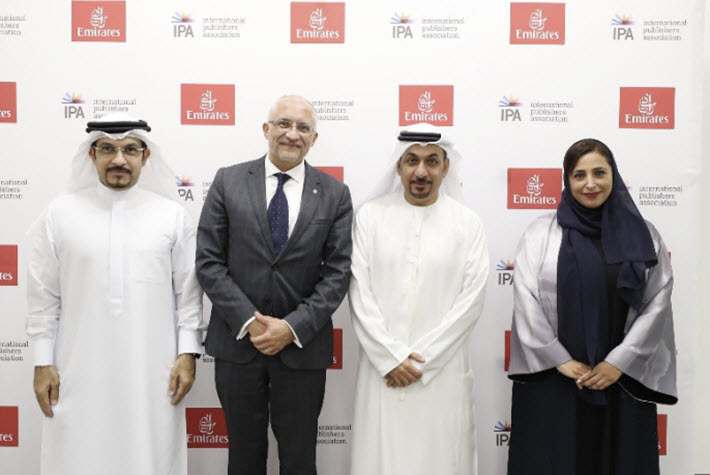 On the sidelines of the just-closed 2019 Sharjah International Book Fair, the IPA and Emirates Airline announce a new partnership. 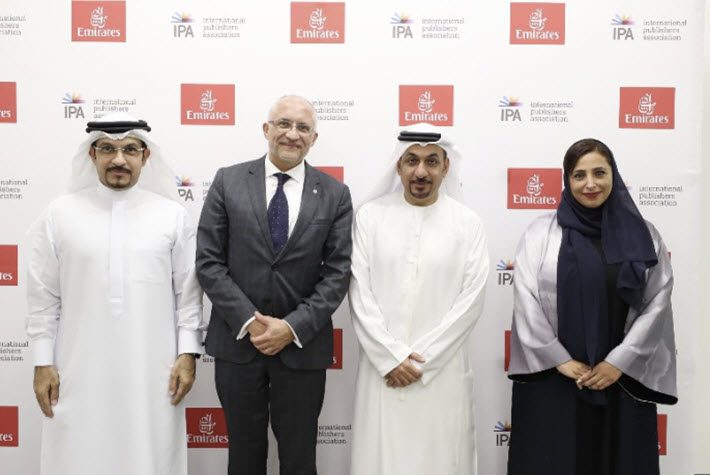 Al Gaith: ‘To Touch an Even Larger Audience’

At last, the Association of Tennis Professionals has nothing on the International Publishers Association (IPA) when it comes to travel partners.

Today, the IPA has announced that Emirates Airline has signed on as its “Exclusive Global Transport Partner,” to “bring key stakeholders together at IPA’s flagship events, such as the upcoming 33rd International Publishers Congress set for May in Lillehammer.

As we’ve covered in our wrap-up report on the 38th Sharjah International Book Fair, the fair this year had many important events and key developments occurring on the sidelines, and this, it turns out, is part of that trend, albeit a deal struck in this case by the Geneva-based IPA. The arrangement was signed Sheikh Al Mualla, who is Emirates’ divisional senior vice president for international affairs; Adil Al Ghaith, the airline’s senior vice president for commercial operations in the Gulf, Middle East, and Central Asia; and by Hugo Setzer and Bodour Al Qasimi, IPA’s president and vice-president, respectively.

What has led up to this partnership is travel for the IPA’s two regional conferences in Africa—Lagos in 2018 and Nairobi this year—and in the Middle East in Amman this year. The success of these events has outgrown the original term used for them, seminars, and the organization is adopting conferences for future such events.

As the IPA is emphasizing in its media messaging, those conferences “have underlined the potential of digital technologies, and young, dynamic entrepreneurs in the region to overcome many of the challenges of traditional publishing while also presenting an opportunity to bring a diverse range of voices and stories to the wider world.

And in a prepared statement on the new Emirates arrangement, IPA president Setzer is quoted, saying, “Emirates has been a valuable sponsor of our regional seminars in Nairobi and Amman and we’re delighted to be able to work with Emirates further to build bridges between the international publishing community and grow the love of reading around the world.”

Speaking for Emirates, Al Gaith says, “Emirates is proud to support the International Publishers Association and their work to grow the publishing ecosystem around the world. With Emirates’ extensive network, the IPA will be able to touch an even larger audience to build capacities, foster greater cultural dialogue and exchange of ideas.

“This sponsorship, along with our support for the Emirates Airline Festival of Literature, is also in line with Emirates’ objective to support events and organizations that enrich the lives of people in the communities that we serve and support culture and arts.”

The IPA counts 81 member-associations of publishers in 69 countries, and was established in 1896.

And Emirates Airline classifies itself as the world’s largest international airline with 158 destinations in 85 countries with a fleet of close to 270 planes, the largest operator of the Airbus 380 and the Boeing 777.