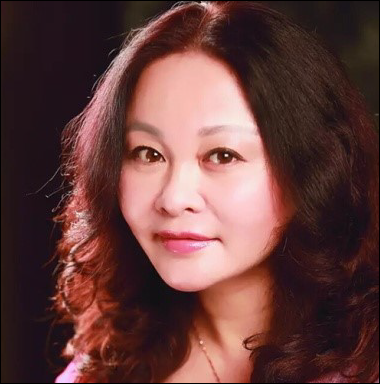 One of Yang Hongying’s most successful series now is 12 years old and has sold more than 70 million copies. Her total unit sales exceed 160 million units.

Last month, the author known to many in China as “Madame Yang” introduced the 27th edition of her runaway bestselling series “Mo’s Mischief.” The new book is called A Cherry Town.

And while many in the West may not yet have heard of Yang Hongying, she has more than 120 stories published–including her novels, short stories, and fables–and she has sold some 160 million copies of her books. She had plenty of name recognition at the China International Book Trading Corporation in Hall 4.0, B2. at Frankfurter Buchmesse.

An active member of China’s writing community, she’s also vice-chair of the Sichuan Writers Association and has seen some of her early work soar to record-breaking sales. Her Diary of a Girl, for example, first appeared in 2000 in its original publication by Writers’ Publishing House. In the intervening 19 years, it has been printed hundreds of times and has sold an estimated 3 million copies. 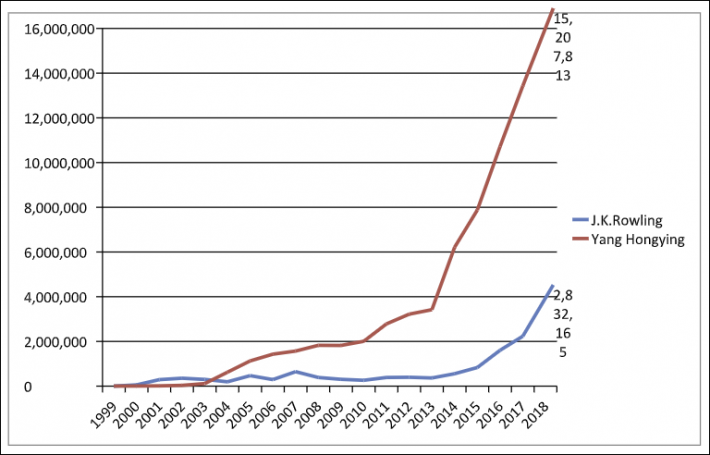 Yang Hongying is frequently called ‘the JK Rowling of China.’ Chinese sales data (after 2014 including both physical and online retail) shows Yang’s lead in sales over Rowling in China. Research and image: Beijing OpenBook

Publishing Perspectives had a chance, on the release of her new A Cherry Town, to ask Yang about her work, and we began by asking if it’s possible for her—with so many successful titles—to select a favorite book from her own work. She chose not a book but a series of children’s books as it has been popular for 12 years and sold more than 70 million copies in China. 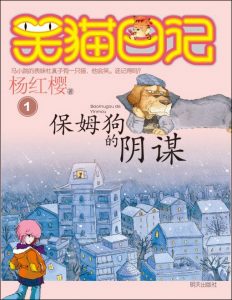 From Yang Hongying’s ‘Diary of a Smiling Cat’

Yang Hongying: My favorite series is Diary of a Smiling Cat. The first reason I like it is that it’s a fantasy story based on the real lives of Chinese children. The prototype of [character] Ma Xiaotiao is a naughty boy I taught when I was a teacher—the Diary of a Smiling Cat series has a continuous relationship with the Mo’s Mischief series, but it’s completely different in artistic style and aesthetic connotation.

The fantasy scene of Cuihu Park is a park in Chengdu, my hometown in southwest China’s Sichuan Province, where I have unforgettable childhood memories.

The second reason I’d choose Smiling Cat is that the character of the cat is a wise animal character with Chinese characteristics. It smiles because it has ideas and enthusiasm for life. With a laughing cat as the narrator, I can direct children to think about basic values regarding life, human nature, and density while they’re happily reading. It encourages them to grow happily but always to cherish a beautiful feeling and faith towards society and the future.

With a lot of passion and love, I’ve written the Diary of a Smiling Cat series for 15 years, publishing 25 books in the group.

The character of Smiling Cat has become a widely known fairytale image among China’s children because it accompanies them in their spiritual growth and conveys positive values to children during their “slow reading” time. The Diary of a Smiling Cat series has become China’s original brand of children’s books because it’s been popular for 12 years and has sold more than 70 million copies in the Chinese market.

‘With a Lot of Passion and Love’

Publishing Perspectives: Can you put your finger on what makes your storytelling such an abiding favorite body of work for children? 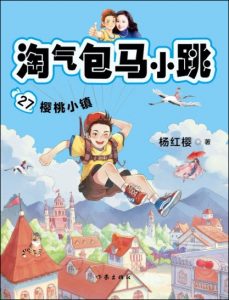 YH: I always want to communicate with children on an equal stance, which makes my works much closer and more inspirational to young readers.

I didn’t start writing books to be a writer, I just wanted to inspire my students to love reading. In the 1980s when there were few original children’s books in China, I wanted to write stories for my students, stimulating their interest in reading and helping them to form a good habit of reading.

Then I started writing only for children without other distractions.

My works only stands in the perspectives of children. This is the only way to write something a child will want to read, and that, I believe, is why my work has been accepted by so many kids in China.

PP: And—with reference to your membership in the Sichuan writers’ organization—what would be your best advice for young, talented writers?

YH: I’d recommend that an author always put the children’s reading needs first and lead with your heart. To write what children love to read means making stories that are works of love.

The real, best children’s literature is content created expressly for children, material that speaks in their voices, forming an equal dialogue with them. Because this is  children’s literature, it can have a major impression on your readers and become an unforgettable childhood reading memory. A good work can stand the test of time. 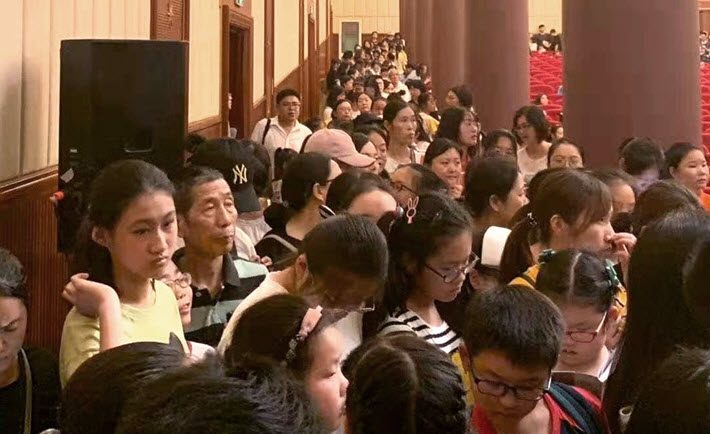 More from Publishing Perspectives on the Chinese market is here. More from us on Frankfurter Buchmesse is here, and more from us on children’s books is here.