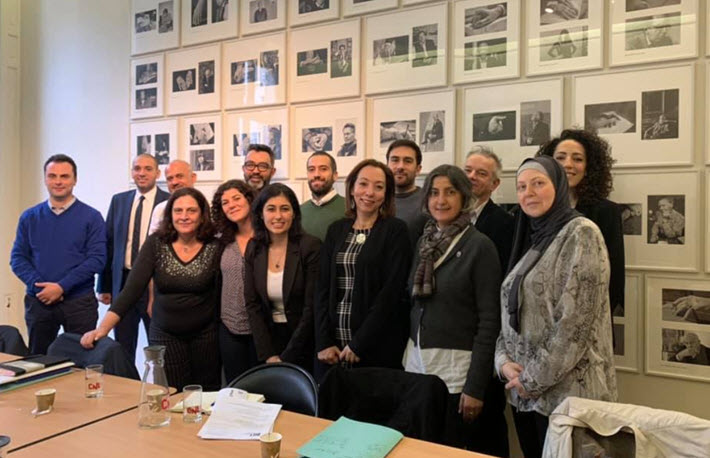 BIEF’s program in Paris has brought Arab publishers into meetings and visits with French counterparts to exchange experiences, books, and viewpoints.

Participants in the BIEF fellowship program for Arab publishers on November 18, the program’s opening day in Paris. Image: Sherif Bakr

‘There Are Many Hurdles’

This is the follow-up event to the first part of the program which, as Publishing Perspectives  readers may recall, took place in December.

Held in the Centre National du Livre‘s (CNL) handsome 18th-century building, the Arab publishers on Monday were welcomed by BIEF director Nicolas Roche. Joining him were Laurence Risson and Pierre Myszkowski. who have managed the project since its inception in 2016, when Actes Sud publisher Françoise Nyssen was minister of culture.

On Monday, the fellows visited Actes Sud. According to their respective interests, they met either with the company’s children’s books imprints or with editors Marie-Catherine Vachet, who handles French and English language authors, and Farouk Mardam-Bey, who publishes works in translation from Arabic.

They then visited the large independent bookshop L’Écume des Pages, the director of which, Loïc Ducroquet, spoke with them about how the bookshop is run. Ducroquet touched on discounts with publishers, returns, and book sales, then was followed by a second presentation from Christophe Daniel, who runs a smaller bookshop in another Paris neighborhood.

Cairo-based publisher (Al Kotob Khan)  and bookshop owner Karam Youssef said she was was surprised and reassured to find that bookselling is considered a risky business in Paris as it is in Egypt, and that a passion for books remains the catalyst for the business.

Ranya Bakr of Al Arabi Publishing in Cairo concurred. “It was so interesting to visit the bookshop and learn the way Loïc deals with things and promotes books, and how he orders them,” she said. “I thought we were the only country that gets big returns, but he has similar problems.”

‘It Would Be Easier To Work All Together’ 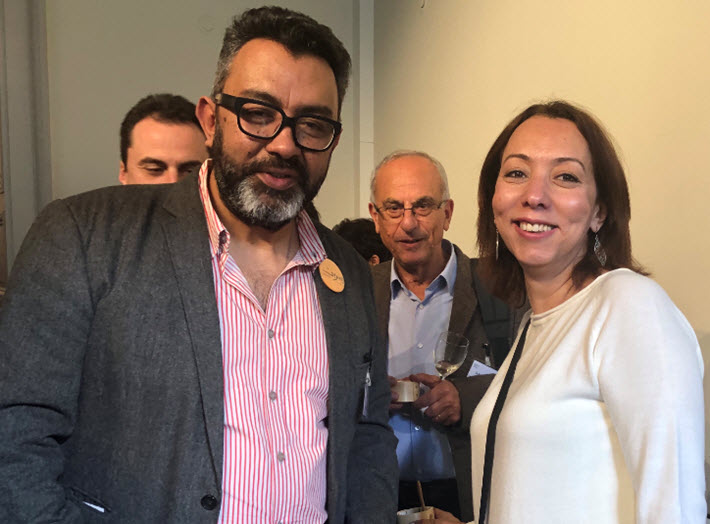 The second day of the fellowship featured two round tables. The first was on social sciences and markets in France and in Arab countries, and the second was on the challenges of literary translation between French and Arabic.

The second session was packed, a reflection of the fact that translation is a fundamental and mutual concern. Talks focused on training programs for French-Arabic translators and on networks and funding available for translators and publishers. 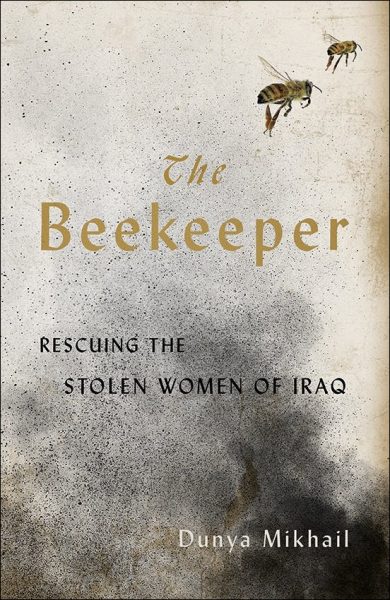 Joachim Schnerf, an editor at Grasset, recounted the circuitous six-month search it took to find a translator for The Beekeeper by Iraqi author Dunya Mikhail. Describing himself as curious about Arabic literature but not a specialist, Schnerf said he had been alerted to the title by Mikhail’s US publisher, New Directions, which published the book in its English translation by Max Weiss and the author.

Schnerf said he’s also in contact with Yasmina Jraissati, still the only major agent in the Middle East, and consults the English-language literary magazine Banipal for information. Nevertheless, he said, he’d like more intermediaries of different ages and interests.

“It’s a real effort to find [Arabic language] books,” Schnerf said, “and there are many hurdles. It would be easier to work all together and facilitate contacts.”

Bakr said that beginning in 2010, Al Arabi began to publish international fiction in translation, and these titles have found a readership. At first, she said, it was difficult to find literary translators and her publishing house had to rely on academics whose translations were frequently too literal.

The Al Arabi team participated in a translation workshop with the Institut Français in Cairo. Bakr said this was very helpful. With all due respect to translators, Bakr said, “The editor plays a big role once the translation has been handed in. Translators and editors need to work hand-in-hand.”

‘Fertile Ground for Ideas and Collaboration’ 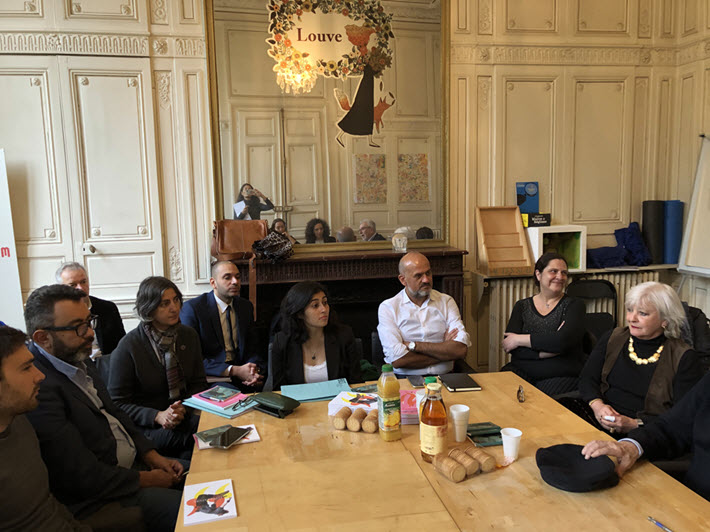 Actes Sud editor Farouk Mardam-Bey has the advantage of being able to read in Arabic. He said that Jraissati’s RAYA agency is an excellent resource, as are books from the long- and shortlists of the International Prize for Arabic Fiction. He also said that his translators often pitch him books, although he finds it difficult to find young translators.

A student in the literary translation program at Paris’ prestigious language school INALCO said that it can be difficult for young translators to get in touch with publishers for potential projects. He also mentioned a new magazine for translators from INALCO on Facebook called Café.

Jörn Cambreleng, director of Atlas— a promotional association for literary translation—described how his organization runs 10-week workshops with mentors for young translators, including those from the Arab world and French translators of Arabic. It’s a difficult yet fruitful “investigative” project , he said, to find mentors who can transmit their know-how.

Didier Dutour of the Institut Français and Natacha Kubiak of the CNL presented  details of the translation grants available from their institutions. Foreign publishers must apply via the Institut Français in their country and funding can be provided for promotion as well as translation. Once the book is published, such promotion might involve internationl travel for an author to appear in an event.

Dutour said that the institute’s funding isn’t only for fiction. Applications are also accepted in children’s and YA literature and for graphic novels. The CNL, Kubiak said, can help with translations but also can fund a translator to travel to France and collaborate with a publishing house or author.

During the latter part of the week, visits are being made to publishers including Gallimard, l’école des loisirs, and to the national library. Participants are also having one-on-one meetings with French publishers.

Marwan Adwan, of Mamdouh Adwan Publishing was part of the first delegation of Arab publishers a year ago and said that this year the fellowship’s  topics have been important.

“We’ve had lots of exchanges,” he said, “and I’m looking forward to my one-on-one meetings.”

Adwan has used a translation grant from the CNL to publish a book but said that until this week, he hadn’t known about the Institut Français funding. He’s also pleased to spend more time with his Arab counterparts, he said, mentioning  a “healthy discussion this morning about bookshops and distribution. We share the same market and struggles but have very different points of view.”

‘We All Face the Same Problems’

Tunisian publisher Youssef Asswad, 28 and a filmmaker, is intent on taking over Sud Éditions, the business his grandfather founded. He’ll be working alongside his mother, who attended the BIEF session in 2018.

He said the fellowship is helpful to him to learn about Arab markets and to meet French and Arab publishers. Sud Éditions is still a local publishing company and doesn’t yet distribute throughout the Arab world.

A Francophone reader, Asswad said he’s studying the Arab market to see how to translate lesser-known French authors into Arabic.

Rasha Odeh’s company in Egypt, Dar Altanweer, publishes 60 to 75 percent of its books in translation from other languages. She  says she’s looking to acquire from French publishers and says philosophy and sociology books from France do best at her company.

Al Arabi’s Bakr said that the fellowship made her feel optimistic because she realized that “At the end of the day, we all face the same problems, even if our industry is not as developed or as rich as [publishing] is in France.”

Project co-manager Risson said, “The BIEF wants to provide fertile ground for ideas and collaboration,” and it seemed clear that the fellowship was succeeding in those terms.

A complete list of the participating publishers can be found here. 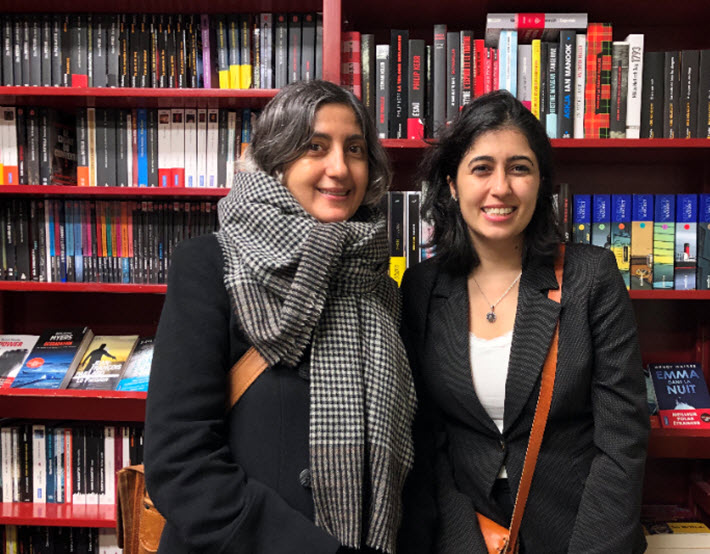 More from Publishing Perspectives on publishing in Arabic and the Arab world is here.