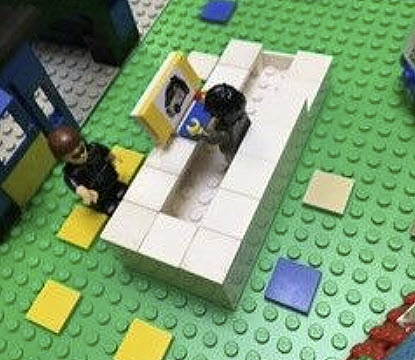 In a ‘Library Week’ competition from the UK’s CILIP, library supporters build their visions of the future in Lego. 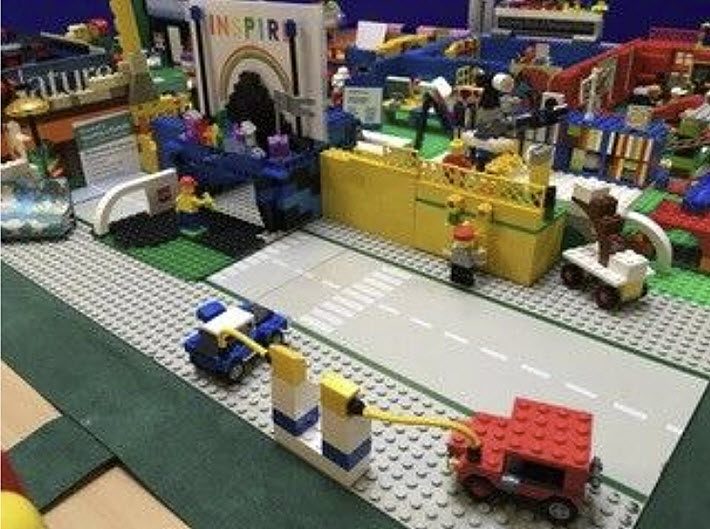 The winning entry in CILIP’s ‘Library of the Future’ Lego competition includes charging stations for patrons’ cars. Image: CILIP and Friends of Padgate

And a ‘Book Cannon’ to Fire Good Reads at Library Patrons

TUK market’s libraries have undergone years of extraordinary and often disastrous financial pressure. Sian Cain reported at The Guardian in December that nearly 130 public libraries had closed in the previous year.

“Over the last year,” Cain wrote, “spending on libraries by local authorities fell by £30 million (US$38 million)” for a “net loss of 127 public libraries in England, Wales, and Scotland, while 712 full-time employees lost or left their jobs, and volunteer numbers increased by 3,000, to 51,394.”

A sense of euphoria, then, is probably logical in reports today (October 11) to the news media from CILIP about “children, young people and Lego enthusiasts from age 2 to 85 [who] have been hard at work as part of Libraries Week.”

The organization has held a competition to have “the library of the future” built with Lego. In its media messaging this morning, the group cites some of the ideas spawned by the project as including:

Publishing Perspectives is particularly taken with the idea of firing books at readers from a cannon.

CILIP’s staff quickly applies “a more serious note” to the Lego-fest, writing, “The entries highlight areas of key concern for library users. For example, there’s a strong green theme to this year’s entries, with eco-friendly libraries, solar panels, wind turbines, and even bicycle-powered computers.” There’s also “a recurring theme of the library as a social space and community hub that’s universally welcoming and inclusive for everyone.”

Many entries, the staff says, included an option for the library to go to the user, including mobile libraries, “flying libraries,” and even “a library designed to support communication with aliens and a teleporter.”

A winning entry has been named: The Friends of Padgate Library created an entry called an “Inspire Library” that, says CILIP, “serves as a knowledge hub and a community hub. Brings people together for learning and wellbeing. Transports children ‘over the rainbow’ using their imagination and creativity. A holistic cultural and scientific center.” The Padgate entry was created by eight people at a “Lego club.”

‘World of Possibilties’ Festival on the Weekend 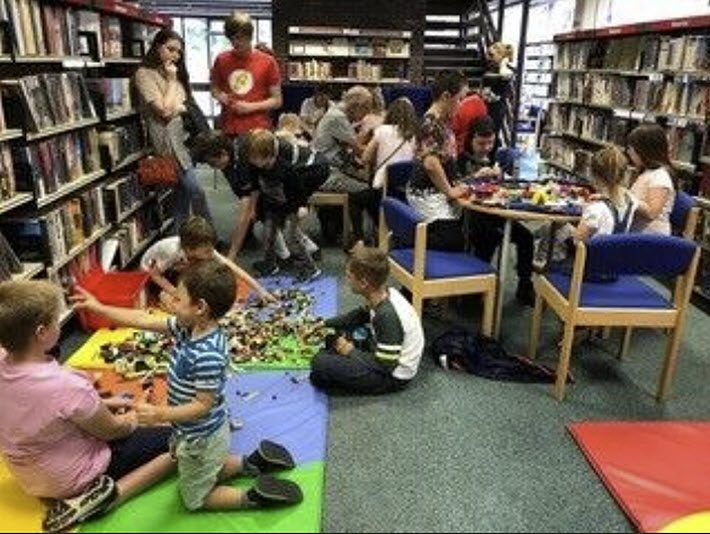 In a prepared statement Nick Poole, CILIP’s chief executive, is quoted, saying, “We have been blown away by the quality and imagination on display in the Library of the Future competition. The entries have made us laugh, made us think, and most of all, they’ve told us how important libraries are in the imaginations of the next generation.

“We saw unique and innovative ideas and inspiring ways to improve library services, all supported by the hundreds of libraries across the UK that organized Lego clubs and encouraged their users to take part in the competition.”

Linda Riley, who’s a member of the winning Friends of Padgate group, says, “Winning the competition is recognition both of the friends group’s hard work and the success of the Lego club. … Their ideas included the out-of-hours automated robotic [book] issue system, indoor play center, information desk, and electric charging points for cars.

“The program of activities we already do and our future plans were instrumental in our ideas for the build.”

The winners received four tickets to LegoLand Windsor and £500 (US$631) to donate to the library of their choice. Not surprisingly the Friends of Padgate made their donation to Padgate Library.

CILIP’s Library Week concludes Saturday (October 12) with a festival of London libraries, called “Worlds of Possibilities.” In descriptive material, we read, “All of London’s 325 public libraries are participating and a number will be delivering an expanded day of events and activities.”

CILIP has a campaign for libraries called Libraries Deliver. In July, Poole announced key sponsorship for this year’s week from the American library distribution company Rakuten OverDrive, and from UK-based Nielsen Book.

More from Publishing Perspectives on the UK market is here, and more from us on libraries is here.