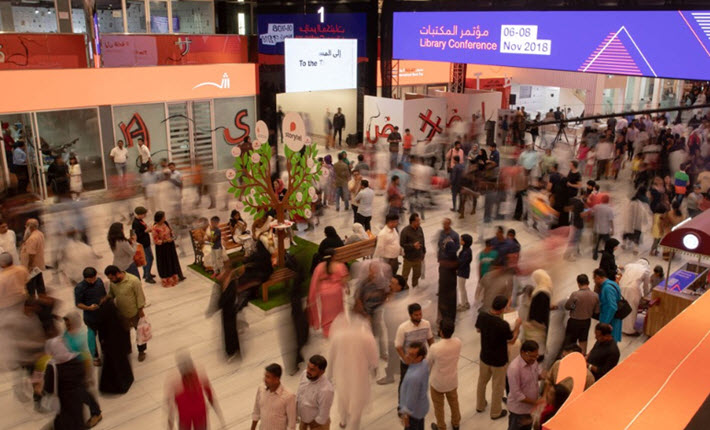 The 2019 Sharjah International Book Fair cultural and cooking programs offer a busy schedules of author appearances and discussions during the 11 days of the fair. 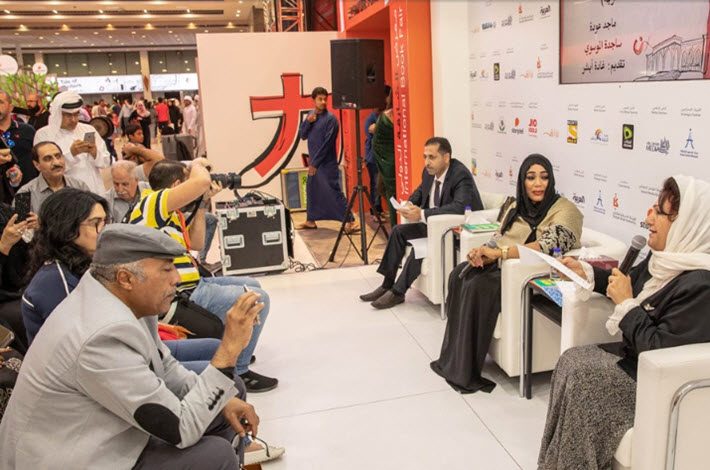 An event in the cultural program of the 2018 Sharjah International Book Fair. Image: SIBF

Books, Bollywood, and the Booker International

The 38th Sharjah International Book Fair, which opens Wednesday (October 30) to run through November 9 has announced a particularly ambitious round of programming in appearances by authors and cultural figures, seminars, speeches, and discussions.

Bollywood icon Amitabh Bachchan, the “Big B” as he’s known, is expected to appear during the run of the fair, and has some of the highest visibility of all the luminaries on tap, although his visit, Publishing Perspectives understands, may be moved to a later date in the show than opening day because of scheduling issues.

Bachchan’s filmography has more than 190 movies on it and he’s the subject of at least seven books, as well as the author of  Soul Curry for You and Me: An Empowering Philosophy That Can Enrich Your Life (Popular Books, 2002). 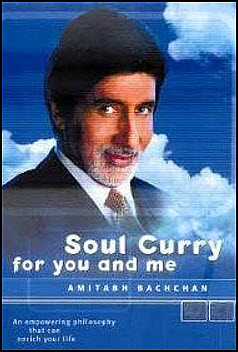 Big B fans had a scare this month when the actor was admitted to Mumbai’s Nanvati Hospital in the early hours of October 15.

He was discharged, however, on the 18th, telling news media including the IANS wire service, here carried by the Khaleej Times, that he’d simply gone through routine checkups and is glad to learn he’s lost five kilos (about 11 pounds), “which is just so fantastic for me.”

In what promises to be one of the busiest openings of long-running fair, the Turkish winner of the Nobel Prize in Literature (2006), Orhan Pamuk, is to be on-site at the fair on Wednesday. 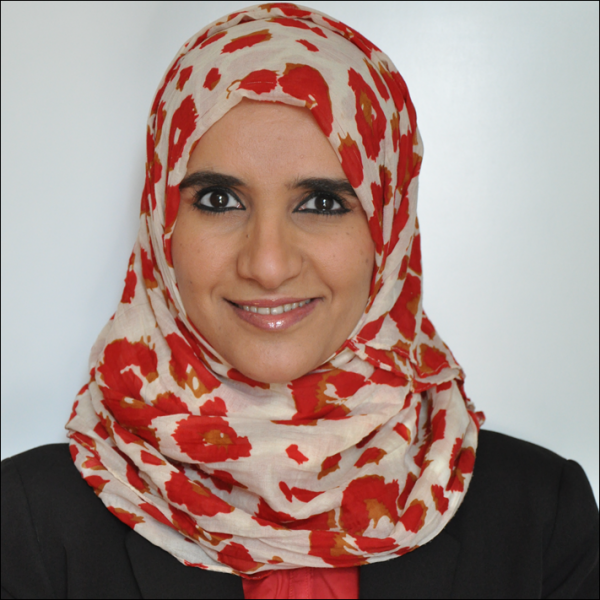 What’s more, on Thursday (October 31), the fair hears from Jokha Alharthi, the winner of this year’s Booker International Prize for Celestial Bodies (translated by Marilyn Booth for Sandstone Press, 2018).

And there is, in fact, a full slate of outstanding Arabic-language talent on tap at the fair, reflecting the Sharjah World Book Capital theme, “Open Books, Open Minds”.

The Arabic-language authors and poets on tap include: 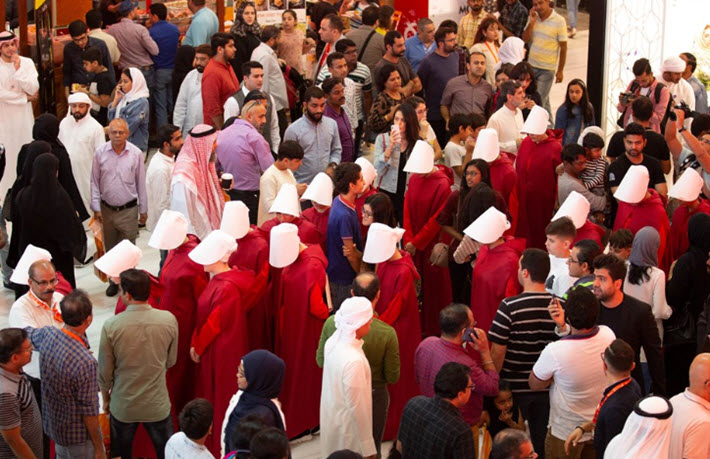 Much is being made here of the coming presence of Steve Harvey, the American comedian, actor, motivational speaker, relationship commentator, and broadcast host. 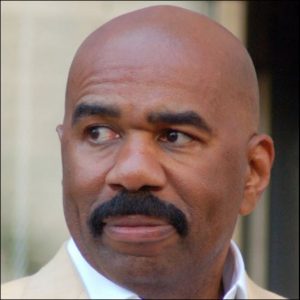 He appears on Thursday at the fair, both in a public session for visitors (8 p.m.) and in a session with students. 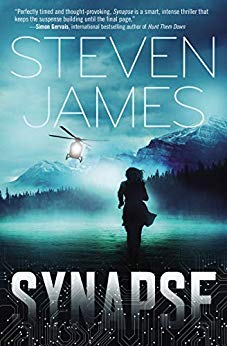 The author’s newest title from Thomas Nelson (releasing November 14) is Synapse, and he’s the writer of The Queen and Every Wicked Man, among many others.

He appears with Jessica Jarlvi, the Swedish thriller writer (Head of Zeus/Aria Fiction), on November 5.

Diane Darke, from the UK, is a Middle East cultural expert with a special focus on Syria and a regular BBC commentator.

A graduate in Arabic from Oxford University, she has spent more than 30 years specializing in the the Middle East and Turkey 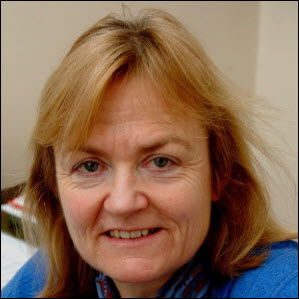 Darke has worked in both governmental and commercial sectors, and her journalistic coverage has appeared in The Guardian, the Financial Times, the Sunday Times, the Daily Telegraph, and Al Araby.

She’s the author of several books on Middle East society, including My House in Damascus (Haus, 2016), The Merchant of Syria (Hurst, 2018) and co-author with Alaa Aljaleel of The Last Sanctuary in Aleppo (Headline, 2019). 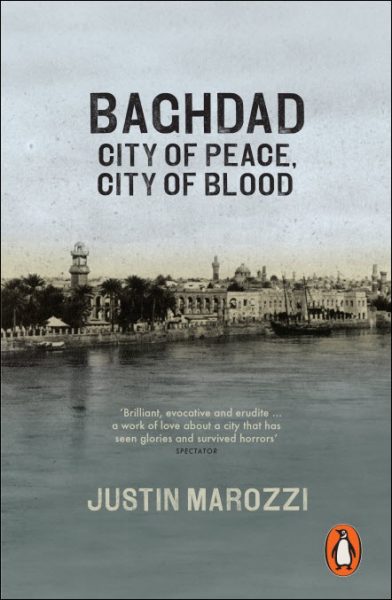 Jonathan Marozzi from the UK is a travel writer, historian, journalist and communications expert. He recently spent more than a year in Mogadishu as communications advisor to the Somalian president and prime minister.

He has travelled extensively in the Middle East and Muslim world and has worked in conflict zones including Iraq, Libya and Afghanistan.

His book Baghdad: City of Peace, City of Blood was released in 2015 by Penguin.

And of special interest to pop self-help readers, Mark Manson, author of the hit The Subtle Art of Not Giving a F*ck: A Counterintuitive Approach to Living a Good Life (HarperCollins, 2016) will be at Sharjah’s fair in its first weekend

He’s speaking with students in one session and, later, in a mainstage public event at 6 p.m. on November 3.

Manson’s approach is to advise people to step around the long-promulgated insistence that making the best of things is the answer to the challenges of life. Positivity is wrong, he says, and a more honest appraisal of life is his answer and bestselling one: Manson’s book has sold more than 6 million copies.

Chefs and Their Cookbooks 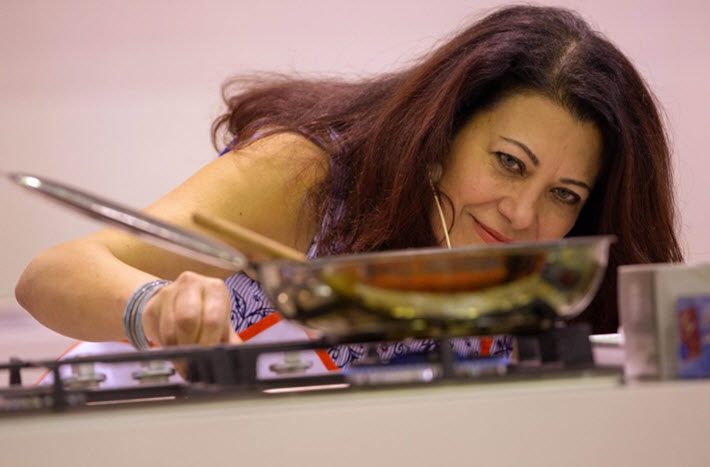 Maryam Sinaiee, author of ‘Nightingales and Roses: Recipes From the Persian Kitchen,’ in the Cookery Corner at the Sharjah International Book Fair 2018. Image: SIBF

Of special interest to cookbook fans will be the fair’s Cookery Corner program, which has its own complete listings here. 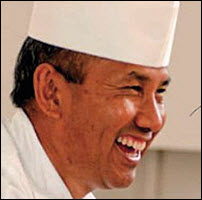 Among the top draws for foodies will be Nepal’s Pemba Lama, who will be at the fair November 3 to 6, and whose The Ultimate Nepalese Cook Book was published by Grierson Publications in 2012. It received two prestigious awards: the Gourmand Award for Best UK Community, Charity and Fundraising Cook Book in 2012, and the World Food Awards Best Cook Book of the Year for 2014.

Pemba has been in the hospitality business for nearly four decades, and served as a Gurkha soldier and Gurkha master chef in Brunei, Kosovo, Hong Kong, Nepal, and the UK. He’s today a specialized instructional officer in the Armed Forces School of Excellence, teaching Nepalese tri-service military and civilians in catering-related subjects.

And Bethany Kehdy is a Lebanese-American chef, author, and consultant. 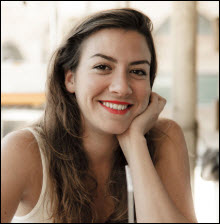 Kehdy’s recipes and writing touch on politics, history, geography, and anthropology Her two cookbooks, The Jewelled Kitchen (Nourish, 2013) and The Jewelled Table (Hardie Grant, 2018), have been published in the UK and sold into more than 30 countries and territories.

Kehdy is a former Miss Lebanon for Miss World (2002) and  has worked in food events and settings from Mumbai to the Sani Festival in Thessaloniki and restaurants in New York, Maui, and on Mykonos.

And others to watch for among authors and cookbook writers at the Sharjah fair this year:

More from Publishing Perspectives more on developments in Sharjah is here.