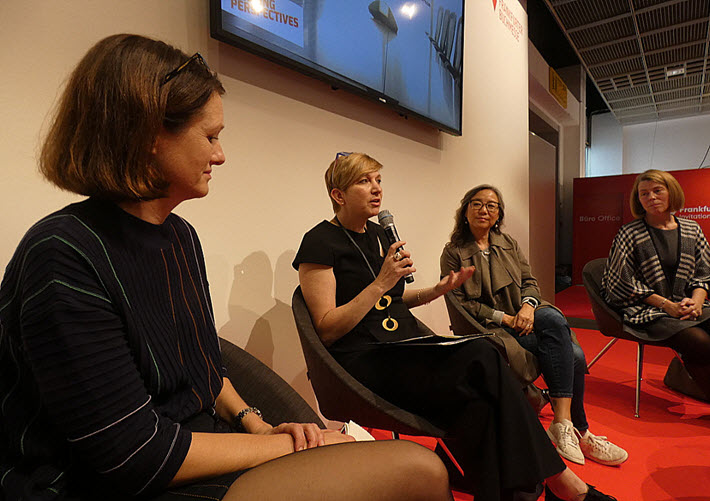 Working through what Amazon Publishing’s Mikyla Bruder describes as ‘the unconscious bias you’re confronted with every day,’ panelists call for the world book business to equalize pay for women and men. 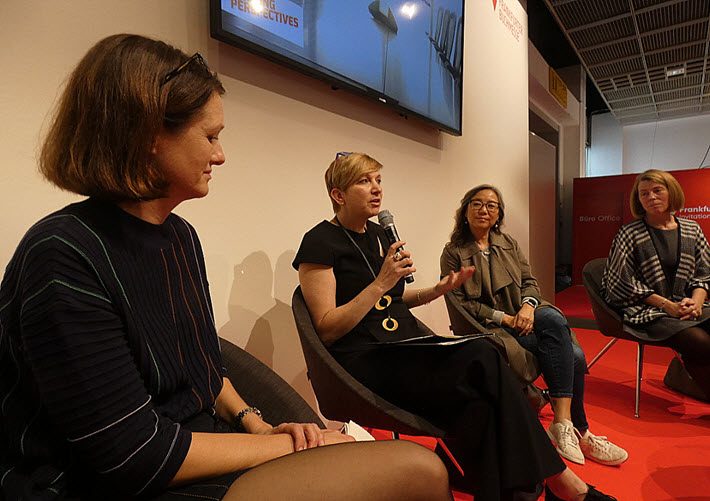 One of the largest and most engaged audiences for our Publishing Perspectives Talks at Frankfurter Buchmesse was our Thursday (October 16) discussion of “Women’s Leadership in Publishing.”

The debate was quickly outlined by an economic context, with one of the biggest rounds of applause being for closing the gender pay gap between men and women in publishing.

Using data from the United States for 2019, Tracey Armstrong, CEO of Copyright Clearance Center, said that women in the workplace are paid 78 cents for every dollar made by men.

“And for women of color or members of under-represented minorities, it’s even worse,” she said, with “women making 60 percent of what men make doing the same job.

“The numbers might be slightly different from market to market, but the trend is the same. And leaders are calling for 2020 to be the year that we, men and women, demand that our executives examine their pay scales and start to make the necessary corrections to close the gap.”

Armstrong introduced the 50/50 By 2020 campaign, calling it “the next jump after #MeToo” and urging audience members to join, press their companies’ executives to join, and ask their human resources departments to support the effort.

Armstrong also commended Internatioal Publishers Association vice-president Bodour Al Qasimi and her associates who have helped to create the new PublisHer program that’s bringing a widening network of publishing’s women together. At Frankfurt, the PublisHer dinner was sponsored by Armstrong and Copyright Clearance Center.

Tracey Armstrong of @copyrightclear : Publishing has major gender & diversity challenges and the impacts are HUGE. pic.twitter.com/TyTFxDurEN

Roanie Levy: ‘Who Made That Decision?’

Roanie Levy, CEO of Canada’s Access Copyright and founding CEO of Prescient Innovations, concurred with Armstrong, citing North American statistics that show “other ways in which women are paid less in the publishing industry.”

Female authors, she reported, earn 49 percent of what their male counterparts make, while books by women from mainstream publishers were priced on average 45-percent lower than books by men. “We have to ask who made that decision,” she said.

Mikyla Bruder: ‘Where Are They Getting That Information?’

Mikyla Bruder, publisher and global marketing chief of Amazon Publishing, called attention to one type of Catch-22 typically heard in editorial board meetings at publishing houses, when the line, “We don’t think the numbers are there” would be a response to content proposed for underserved readerships.

“But those things are so interwoven,” she said. The audience isn’t there if the content isn’t offered to them.

“This is the unconscious bias you’re being confronted with every day. If you’re being told the numbers aren’t there, where are they getting that information?”

And from Frankfurt’s Guest of Honor Norway, Kagge Forlag managing director Jorunn Sandsmark said that the Norwegian market doesn’t have a lot of data on gender divide in publishing, but that in general, of course, the Scandinavian cultures have long been more purposefully conscious of such issues.

“I noticed, in fact,” she said, “that at the opening ceremony here at Frankfurt, Germany was represented by four men, and Norway by one man and three women,” including prime minister Erna Solberg.

What remains, of course, is a lot of work from everyone in publishing to defeat unconscious bias and move toward parity, making us think that this topic may well be one we’d like to see in next year’s series of talks, too. Watch for it.

Our final Publishing Perspectives Talk of the week, on ‘Blockchain and Publishing,’ is at 10:30 a.m. Friday (October 18) on the International Stage in Hall 5.1, A128. All trade visitors are welcome to join us for a lively update on where the technology is and how it can support publishing. Speakers: Roanie Levy, Sebastian Posth, and Simon-Pierre Marion.

More from Publishing Perspectives on Frankfurter Buchmesse is here, and watch for our Show Dailies, the leading magazine of the book fair, available when you arrive each morning at Messe Frankfurt.