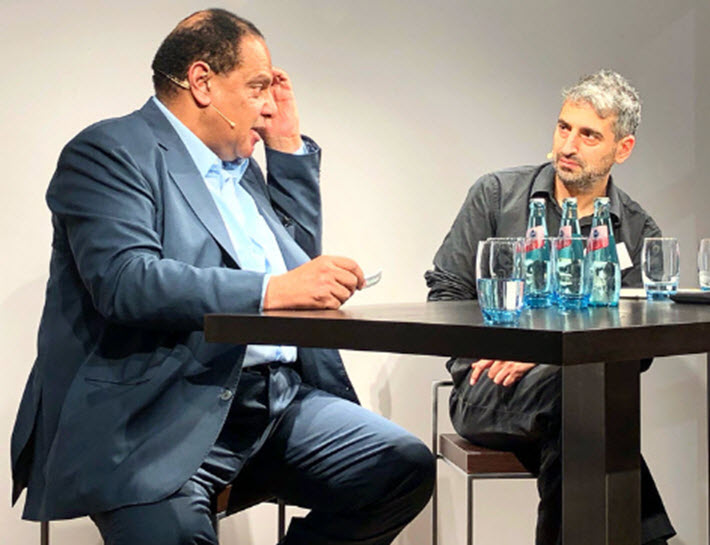 Two days before the Frankfurter Buchmesse opened, a program in Frankfurt hosted discussions with publishers, translators, and authors on bringing Arabic writing to European readers. 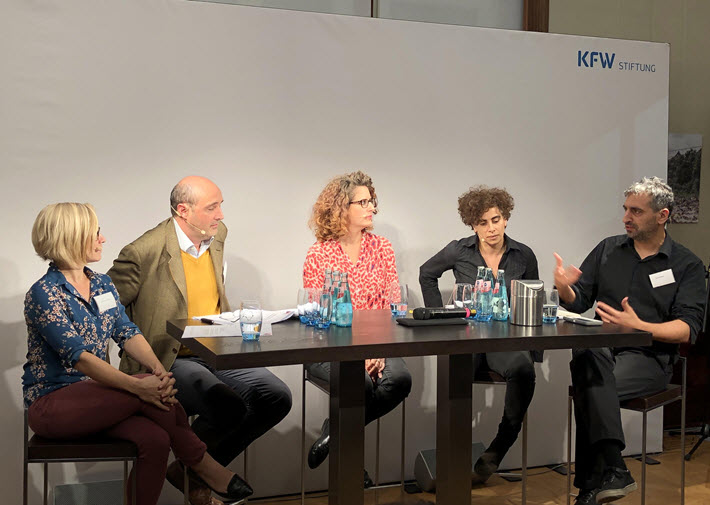 ‘In the Silences Based on Politics’

Ahead of the opening of the 2019 Frankfurter Buchmesse, the independent German foundation KfW Stiftung held a short-stories masterclass, in cooperation with the Goethe-Institut in Cairo for young Arab writers. The program included 11 writers (one Syrian writer was not granted a visa), selected from workshops held in Cairo, Beirut, and Jericho.

“If the passion is there when you translate, as a publisher you have to promote the book with equal passion.”Piero Salabè, Hanser Verlag

“The Politics of Translation: Arabic Literatures in Europe,” a closing conference, was staged on October 14 at Frankfurt’s Villa 102 in cooperation with Commonwealth Writers—a program of the Commonwealth Foundation, which produces the Commonwealth Short Story Prize.

Egyptian author Alaa Al Aswany arrived on the last day to talk to the young writers and to participate in a conversation  that evening with Daniel Medin of the Center for Writers and Translators at the American University in Paris.

In a panel then moderated by Medin, the evening’s core issues were discussed by Shibli; Lynn Gaspard, of Saqi Books in London; Arabic-to-English translator Elisabeth Jaquette, executive director of the American Literary Translators Association (ALTA); and German editor Piero Salabè of Hanser Verlag.

Editing, a Lack of It, and Intervention

Alaa Al Aswany, left, and Daniel Medin at the KfW Stiftung event in Frankfurt on ‘The Politics of Translation.’ Image: Olivia Snaije

There’s an interventionist style in the UK, France, Germany, and the United States, Gaspard said, when it comes to editing a translation. She said that most Arab publishers don’t provide much editing.

Lebanese author Elias Khoury jokes that “he looks forward to being translated into English because that’s when he’s edited,” Gaspard told the audience.

“It’s not about the literal translation but the transformation of one’s Arabic from reading these translations from other languages.”Adania Shibli

Piero Salabè, who edits foreign literature at Hanser Verlag, said that because he can’t read the original texts in Arabic, editing is not a given.

“You have to work with the translator to solve questions and contradictions. When something doesn’t work it’s usually because there’s an error in the translation or something is opaque in the original manuscript.”

If a manuscript is good, Salabè said, “There shouldn’t need to be many changes.”

Shibli—whose latest book, Minor Detail was translated by Jaquette and is to be published in 2020 by Fitzcarraldo/New Directions—said her editors don’t interfere much with her work. “I tend to be a heavy editor myself,” she said. “What’s unsaid and not written is as important.”

So how to translate what’s unsaid?

“I believe in the collaborative effort between the editor, translator, and writer,” Jaquette said. “In the silences based on politics, cultural background, and language, you can assume the reader will fill in the blanks. But with a different readership, it can mean different things, and there might need to be a shift.”

As far as the boundaries of language go, Shibli said, “As readers of Arabic, we don’t grow up only reading Arabic literature. Translation is essential to us. And these translations sometimes push the boundaries of the Arabic language.

“It’s not about the literal translation but the transformation of one’s Arabic from reading these translations from other languages.”

Jaquette agreed with Shibli, saying that translation pushes the boundaries of English as well. “The language has to be capacious enough to accept it.”

Arabic-to-English translations in particular have changed over the past 20 years, Jaquette said.

Translators used to be students of Arabic, and Arabic literature was usually published by university presses. “Today, there’s a new generation of Arabic translators more interested in literature.”

And what of the outlook for Arabic literatures in translation?

Salabè said he had hoped there would be more interest in Germany, given the presence of Islamic and Arabic culture and refugees. But it remains a challenge, he said.

“If the passion is there when you translate, as a publisher you have to promote [the book] with equal passion. Any place can be the center of the world when literature is universal … I’m optimistic.”

Gaspard said that despite the lack of drive in the UK to understand Arab culture, “There has been a really important surge in students learning Arabic in university and in translation courses.

More from Publishing Perspectives on Arabic literature is here. More from us on translation is here. And more on the Frankfurter Buchmesse is here.

A version of this story was printed in our Frankfurt Show Daily for Wednesday, October 16. All of our Publishing Perspectives Show Dailies from this year’s book fair are available for you to read, free of charge. You can download copies of each edition in PDF in our magazine section.