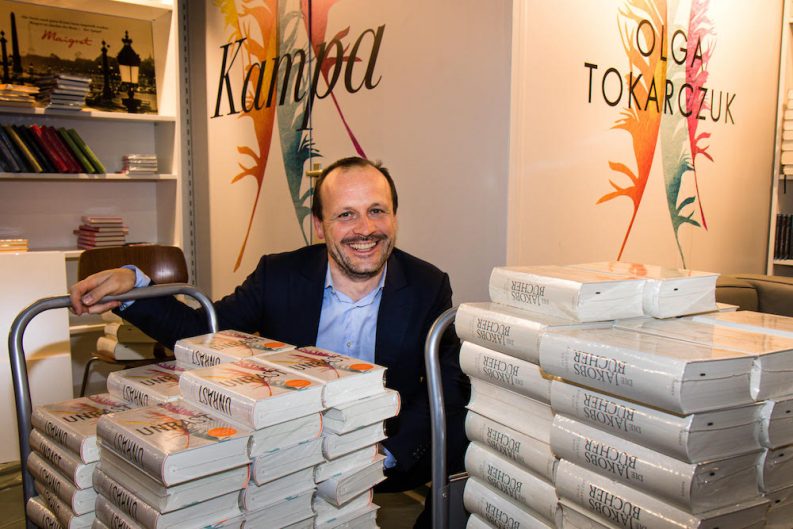 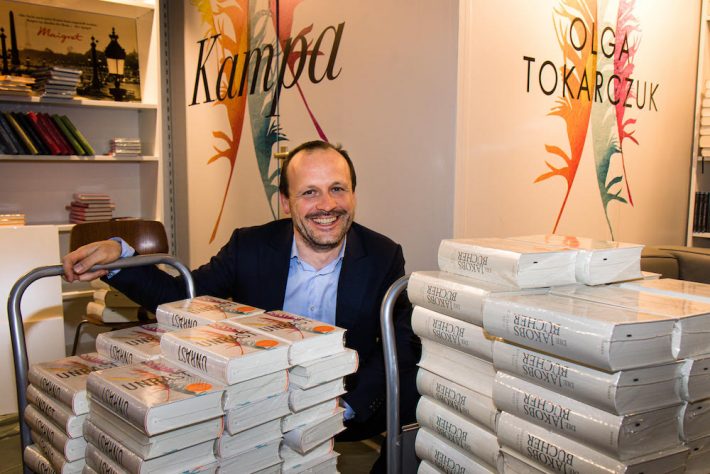 The young, independent Kampa Verlag published its first books in September 2018. This year its author, Olga Tokarczuk, won the belated 2018 Nobel Prize in Literature. “Which, actually, is as if she was awarded the prize one month after we had launched,” says Daniel Kampa, founder and majority owner of the Zurich-based independent German-language publishing house.

As Kampa and his team set up their stand at the book fair surrounded by piles of Tokarczuk’s latest book in German translation, Die Jakobs Bücher (The Books of Jacob) and her 2018 Man Booker International prize-winning Unrast (Flights), they looked alternately overwhelmed, happy, incredulous, and slightly bleary-eyed.

Print runs for The Books of Jacob started out at 3,000 copies, but Kampa is reprinting 15,000 copies—and the same number for Flights. “The print run changes every day,” said Kampa, who has brought forward to November publication for three more Tokarczuk novels. “Production and the printers are stressed, but it’s a happy kind of stress.”

The Luxembourger, who had most recently worked at Hoffman und Campe Verlag and before that spent 20 years with Diogenes, said that because his parents are Polish, he had always had an interest in Polish literature and was a big fan of Olga Tokarczuk’s work.

“Her career in Germany had been sad,” said Kampa. “Her books were published by several different publishers, remaindered, then went out of a print. When I founded my company, I thought, ‘she is the female voice of Polish literature. If you’re crazy enough to found a publishing company you’re crazy enough to buy a 1,200-page book.’”

Not only did the translation of The Books of Jacob by Lisa Palmes and Lothar Quinkenstein cost 30,000 euros, but Kampa bought Tokarczuk’s entire backlist as well.

Did he have a sense that she might win the Nobel prize?

“Of course, I thought she deserved it, but you can never speculate on a prize. You can’t even speculate on success. If you’re a small publisher, you publish books that you love, and even if they don’t sell, they’re still great books and you love them.” 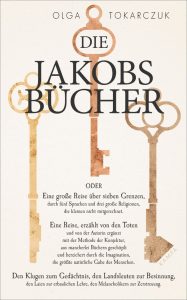 Kampa’s house is not exactly small-scale—for their first season they published 40 books. He says he knows it’s a lot for a small publishing house, but his interests are eclectic, and he had worked for big publishers. Besides contemporary literature, they publish crime and modern classics; and in non-fiction, a series of interviews with authors and artists such as Siri Hustvedt, Margaret Atwood or Federico Fellini. Kampa’s business partner and friend, Ann Kathrin Doerig, makes films about their authors for the Kampa site.

Nevertheless, Kampa Verlag is just starting out, albeit with a star shining over them. As the team piled into a van in Zurich, destination Frankfurt, with their books, some office furniture, and a bright red iconic Olivetti Valentine typewriter for decoration, Anica Jonas, Kampa’s distribution manager, glanced at her email and muttered “oh no.”

“What?” everyone asked nervously. Their author Louise Penny’s book Tief engeschneit (Dead Cold) had made it onto the Spiegel bestseller list. More books to load in the van—a good problem to have.

For the moment, their crime list is what’s sustaining them, Kampa says. Besides Louise Penny, they publish Georges Simenon’s Inspector Maigret series, and a German crime author Alex Lepic, inspired by Simenon’s work, whose Lacroix und die Toten vom Pont neuf (Lacroix and the Deaths on Pont Neuf) has done very well in Germany with interest coming in from foreign publishers.

Since Tokarczuk won the Nobel Prize, putting the cash upfront for printing “is a strain on our cash positions, but it’s a nice strain,” says Kampa. The Books of Jacob, which focuses on an 18th-century historical figure who was highly controversial, “is her major work … It’s about an era in Europe at the beginning of the enlightenment. It’s about turmoil, tolerance, religion, and cosmopolitanism. It’s all-important today because these European values are under pressure. We call it a historical novel for today.”

When the Nobel Prize news broke, Tokarczuk just happened to be on a tour in Germany. She will be at the book fair at the Kampa Verlag stand on Thursday at 5:00 p.m. in Hall 4.1 G47.