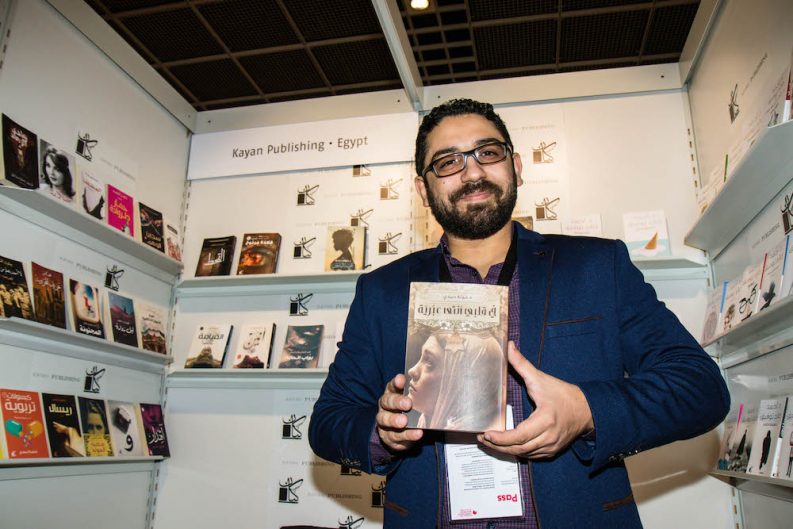 In Frankfurt as part of the fair’s 2019 Invitation Program, Egyptian publisher Mohamed Sabry has seen success with his fresh approach to running Kayan Publishing. 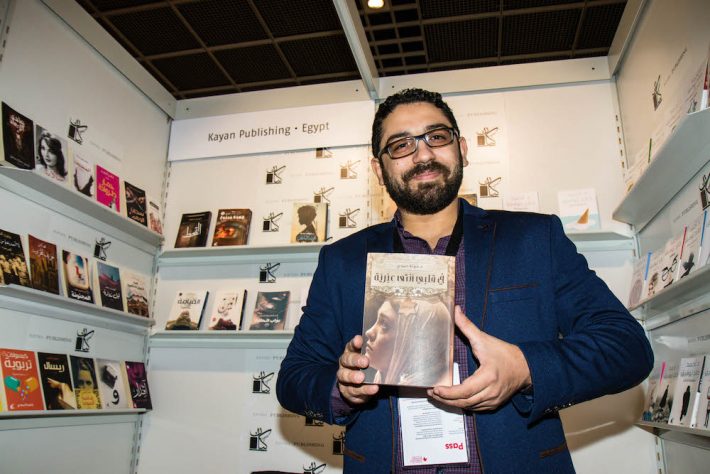 Mohamed Sabry, publisher at Kayan Publishing in Egypt, with one of his bestselling titles, The Jewish Girl in My Heart by Khawla Hamdi. Image: Johannes Minkus

“We had just had two revolutions and it was the worst climate ever, but we had passion,” said Sabry, who is part of the Frankfurt 2019 International Invitation Program. Both Sabry and El Tohamy studied law but ending up working in publishing. Sabry had always loved books, in particular the science fiction author Nabil Farouk, whose The Future Archive “was amazing. I still want to read it over and over again.”

The Giza-based company publishes between 12 and 17 books a year; fiction—including science fiction—and nonfiction, and all their books are by debut authors (with one exception) from countries spanning the Arab world, although the majority are Egyptian. His readers are young—between 13 and 30.

One of the first books Sabry published was a novel by Tunisian author Khawla Hamdi, with the catchy title A Jewish Girl in My Heart. It’s the story of a Muslim girl in Tunisia who loses her mother and goes to live with a Jewish family. It was an instant success.

“People like the book because it’s an original story and it’s a love story. It talks about the three main religions in a tolerant way,” said Sabry. The initial print run was 1,000 copies, but it has since sold more than 200,000 copies in the region. Bringing up the primary concern for publishers in the Arab world, Sabry added that an estimated 1 million pirated editions of A Jewish Girl in My Heart have sold as well.

Sabry has not yet sold rights to the book since his company has been concentrating on developing within the Arab region.

Khawla Hamdi’s second novel, the first of a planned quartet, The Jasmine Migration, is out now, and the subject is Arab immigrants in France.

Sabry came to the publishing industry because he had a friend who ran the now defunct Dar Laila and often visited the company where he “fell in love “with the industry. He ended up working for Dar Laila where he learned the trade.

One of Kayan’s imprints was inherited from Sabry’s friend at Dar Laila, which is a popular collection of books by the well-known Egyptian author Ahmad Khaled Tawfik, who died in 2018. The collection includes young adult fiction and essays in a wide range of genres, including satirical horror.

Like most Arab publishers, Sabry and a team of five or six people spend much of their time traveling to book fairs to sell their books—10 outside of Egypt. They find their authors mostly via social media, but they also meet potential authors at book fairs.

Sabry reiterates that the most challenging aspect of being a publisher in Egypt is dealing with piracy.

“You can find my [pirated] books everywhere. The minute you have a bestseller, it’s pirated. Sometimes it takes them only three days after publication to have a pirated version. It makes our blood pressure boil.”

Besides piracy, Sabry says other challenges include a lack of bookstores and distributors, and the fact that there are no literary agents. “There are more than 100 million people in Egypt and no agents. It’s crazy.”

“We have to start thinking about creative, new ways in publishing,” said Sabry, which he does by communicating as much as possible with potential authors and readers.

At the back of Kayan books there is a paragraph encouraging writers to get in touch, and for readers, Sabry includes a mini-catalogue of his books as well as coupons, ranging from fast food restaurants to opticians. Sabry pays a fee for the coupons via a company called Bogo Plus, and although he says some publishers look down on the practice, he feels it adds value to the books and readers have written to thank him.

Another initiative Kayan Publishing takes is to adopt a wide variety of pricing in the region. “In Egypt people need books to be cheap. We and younger publishers adapt our prices according to the economics of the country to make it possible for readers to buy books.”

He hopes that publishers in the Arab world can unite in order to face their many challenges. In the meantime, Sabry is enthusiastic about being at his first Frankfurt Book Fair and is looking to acquire and sell rights. “I will be back,” he says.