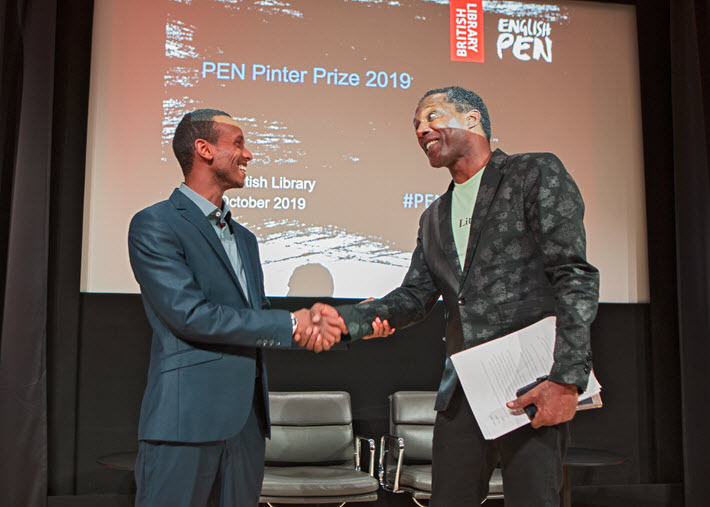 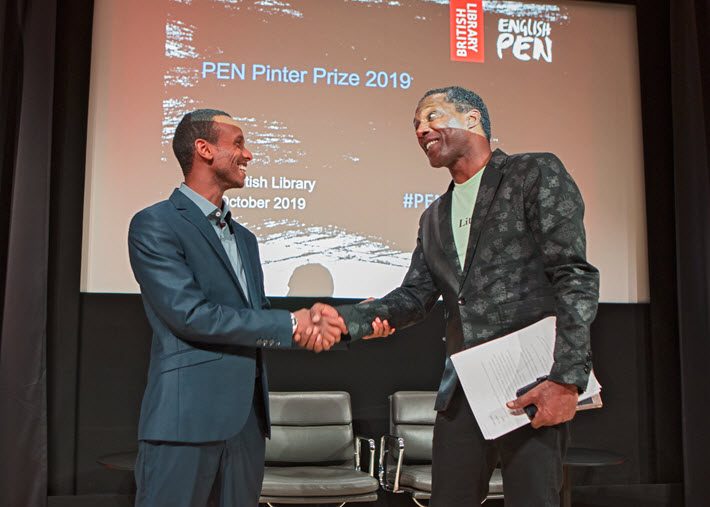 ‘A Man Who Stands By His Word’

Even as Ethiopia’s prime minister Abiy Ahmed has been named today (October 11) to receive the Nobel Peace Prize for his work in quelling the country’s two-decade conflict with Eritrea, English PEN in London has named Ethiopian writer, blogger, and democracy activist Befeqadu Hailu to receive the 2019 PEN International Writer of Courage.

Lemn Sissay, as Publishing Perspectives reported, has been made this year’s PEN Pinter Prize laureate. The award was established in 2009 in memory of Nobel laureate playwright Harold Pinter (1930-2008) to a writer resident in the United Kingdom, the Republic of Ireland, or the Commonwealth who, in the words of Harold Pinter’s Nobel speech, casts an “unflinching, unswerving” gaze upon the world and shows a “fierce intellectual determination … to define the real truth of our lives and our societies.”

The winner of the Pinter Prize then designates a recipient of her or his choosing for the International Writer of Courage award.

Thursday evening in London (October 10), Sissay made the announcement of his choice of Hailu at the British Library in recognition of Hailu’s work in co-founding the Zone 9 blogging collective, a platform for protest of human rights violations in Ethiopia.

Hailu has been jailed four times for his blogging and activism, once for 18 months. In no case has he been convicted of charges. Despite the risk of future imprisonment, Hailu has been awarded CPJ’s International Press Freedom Award 2015, RSF Award for Citizen Journalists 2015, Hellman/Hammet Human Rights Award 2015, and Martin Ennal’s Award Finalist for Human Rights Defenders, 2016.

In making the announcement, Lemn said about Hailu, “It is because of his passion for writing and belief in freedom of expression for Ethiopians that I have chosen Befeqedu Hailu.

“He is a novelist and a poet and a blogger. He is a man who stands by his word and whose words stood in the face of prison and arose far, far above to declaim in the name of humanity.

“When I was considering him I spoke to many Ethiopians in Ethiopia about him. He is loved by his people and the younger generation:  He is a twenty first century hero.  It was obvious that the Writer of Courage had to be him.  He is my hero.” 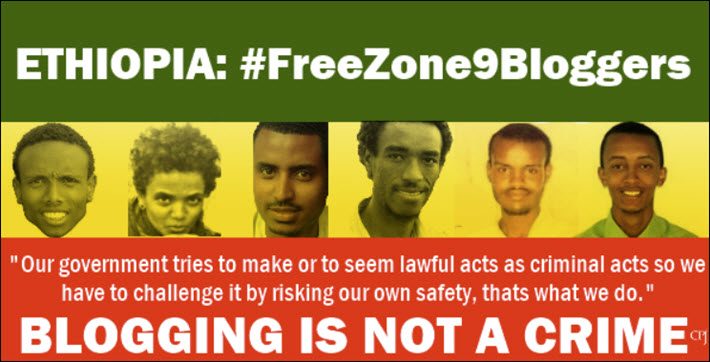 A 2014 graphic calling for the release of Zone 9 bloggers including Befekadu Hailu. Image: Anyuak Media

‘Encourage Audiences To Get Out of Their Comfort Zone’

And in return, Hailu is quoted saying, “I think freedom of writing or freedom of speech is an intermediary path between change and violence.

“Many writers disdain violence. And yet, they write sour truth and encourage audiences to get out of their comfort zone to configure a better world. No war, no campaign has more power than writing to change the world without claiming lives.”

Hailu had eight associates in co-founding Zone 9 in 2012, and today he’s the deputy executive editor of Addis Maleda,  a columnist for Duestche Welle’s Amharic Service, and program coordinator for the Center for Advancement of Rights and Democracy. He also continues to blog in English and Ahmaric on his personal blog.

He is by profession in information systems management. His novella titled Children of Their Parents was awarded the 2012 Bill Burt Award for African Literature from Ethiopia. Hailu began his career as a Researcher in St. Mary’s University in Ethiopia and became a democracy activist promoting freedom of expression through mainstream and social media. He has worked as an editor for Enqu Magazine, editor-in-chief for Weyeyet Magazine and volunteering editor for Global Voices, all in Amharic.

The PEN Pinter Prize is supported by the Blavatnik Family Foundation, Ruth Maxted and The Thompson Family Charitable Trust. 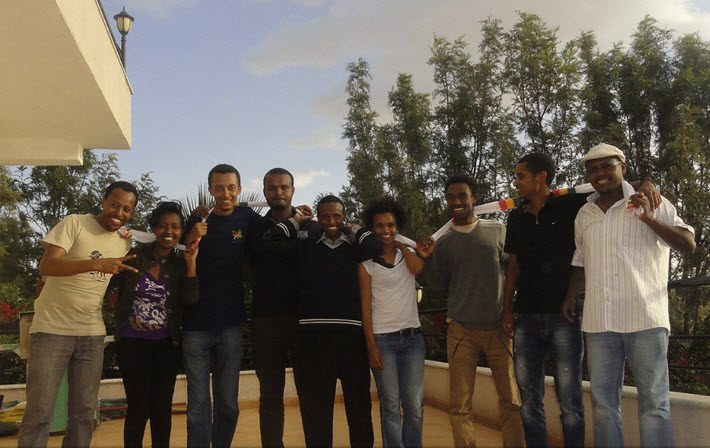 An image from December 2012 of the nine co-founders of the Zone 9 bloggers collective. Befeqadu Hailu has been named PEN International Writer of Courage 2019 in part for his work with the Ethiopian ensemble. Image: CC BY-SA 4.0

In another story from the PEN organizations, PEN America president Jennifer Egan has issued a sharp statement of rebuke to the Nobel program for its designation of the Austrian author Peter Handke as winner of the 2019 Nobel Prize in Literature.

“PEN America does not generally comment on other institutions’ literary awards. We recognize that these decisions are subjective and that the criteria are not uniform. However, today’s announcement of the 2019 Nobel Prize in Literature to Peter Handke must be an exception. 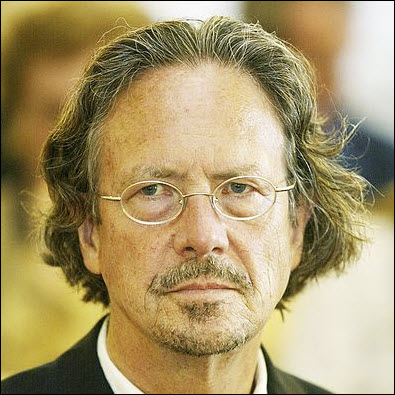 “We are dumbfounded by the selection of a writer who has used his public voice to undercut historical truth and offer public succor to perpetrators of genocide, like former Serbian president Slobodan Milosevic and Bosnian Serb leader Radovan Karadzic.

“PEN America has been committed since the passage our 1948 PEN charter to fighting against mendacious publication, deliberate falsehood, and distortion of facts. Our charter further commits us to work to “dispel all hatreds and to champion the ideal of one humanity living in peace and equality.”

“We reject the decision that a writer who has persistently called into question thoroughly documented war crimes deserves to be celebrated for his ‘linguistic ingenuity.’ At a moment of rising nationalism, autocratic leadership, and widespread disinformation around the world, the literary community deserves better than this.

“We deeply regret the Nobel Committee on Literature’s choice.”

In a much less contentious selection, the Polish writer Olga Tokarczuk was given the 2018 Nobel in literature. The announcement of the award was delayed , as Alexandra Alter and Alex Marshall write at The New York Times, because the Nobel last year was mired in scandal. 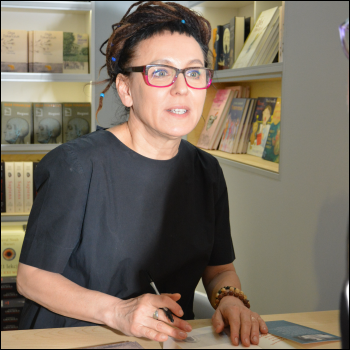 Tokarczuk, who won the 2018 Man Booker International Prize for Flights (UK) in its English translation by Jennifer Croft–and also was the 2018 laureate of the Jan Michalski Prize (Switzerland)–was also on the longlist for this year’s US National Book Award longlist for its Translated Literature award for her Drive Your Plow Over the Bones of the Dead in its English translation by Antonia Lloyd-Jones.

At the Times, Alter and Marshall quote Tokarczuk on her Nobel, exhibiting none of the qualms voiced by Egan on behalf of PEN America.

In an interview with Poland’s Gazeta Wyborcza on the Nobel news, Tokarczuk says, in the Times’ translation of her interview from the Polish, “I am also very happy that Peter Handke has received the award with me, I value him very much.

“It’s great that the Swedish Academy appreciated literature from the central part of Europe. I am glad that we are still holding on.”

More from Publishing Perspectives on publishing and book awards programs is here. More from us on English PEN is here and on PEN America is here. More on the work of Olga Tokarczuk is here.