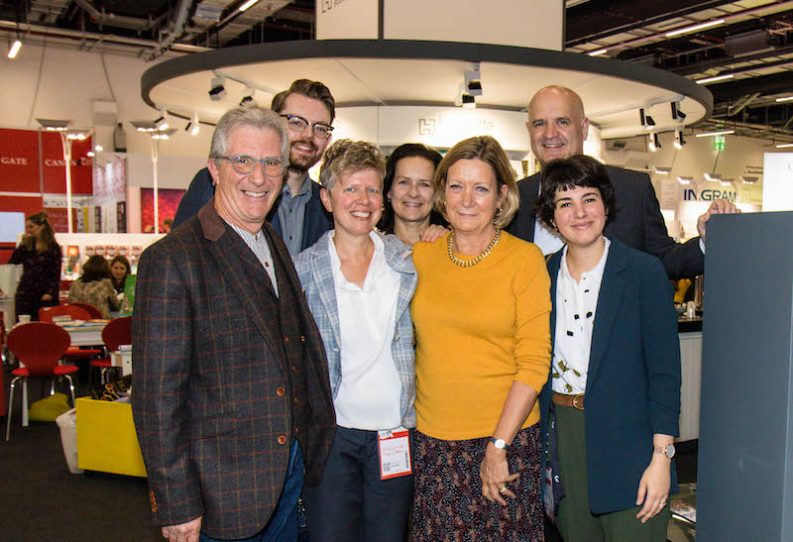 After more than four decades in the book business, Hachette UK’s group communications director Clare Harington will retire with a wide network of friends in the industry. 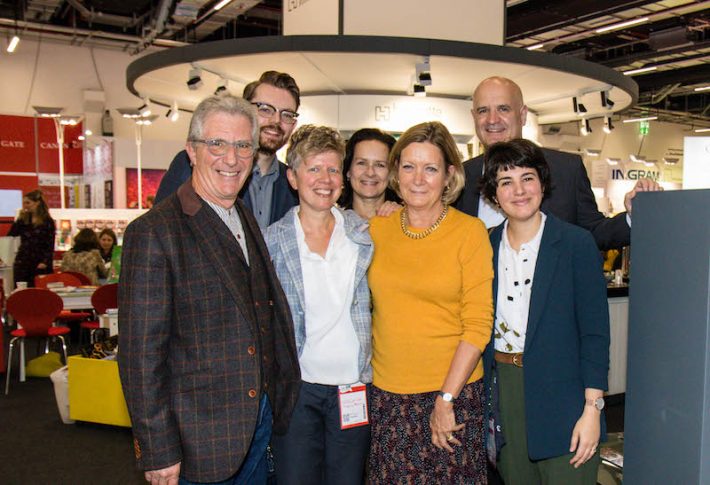 ‘The Coolest Place in Publishing’

Hachette’s communications director Clare Harington has been a constant in the UK industry for more than 40 years.

Unflappable and professional, always warm, engaging, and helpful to the news media, her annual presence at the publisher’s party at the Hessischer Hof on the night before the Frankfurter Buchmesse opens is as familiar as the Hammering Man sculpture just across the road. But now, she has decided to—as she puts it—“have a different kind of life, one that isn’t built around work, or so much work.

“Which isn’t to say that I haven’t absolutely loved my time in publishing. But I just want to take a step back and have a think.”

She leaves Hachette near the end of the year, and so is using this year’s Frankfurt to say a few goodbyes, or more accurately see-you-laters because she has a wide network of friends in the business, and she says she’ll be staying in touch.

“I’ve always said to people that this industry is a village,” Harington says. “You have to treat everyone with respect and understanding. It’s a people business. And besides, you never know when you’re going to meet them again.”

Harington was Salman Rushdie’s press officer during the fatwa years—”That taught me about crisis management and much else”—and her shepherding of actor-turned-Viking novelist Dirk Bogarde around the country meant he became a friend with whom she remained in close contact until his death in May 1999.

Her own entry into the publishing village came in the 19702 as a secretary at William Collins Children’s.

“That was the traditional way into the business for women then,” she says. “Once I got my feet under the desk, I was given two authors to look after: Michael Bond and PL Travers. What a beginning! I was in awe of both of them and can remember having tea with PL Travers in her flat. I felt unbelievably privileged because I loved her books.”

From there, she joined the publicity offices at Pan Macmillan in its legendary Cavaye Place days in Fulham, with Sonny Mehta and Simon Master at the helm. These were the early years of Picador, whose authors included William Burroughs and Hunter S. Thompson who, Harington says, once “refused to do an interview unless particular ‘refreshment’ was provided.

“Sonny and Simon were a great partnership and I think we knew we were working in the coolest place in publishing.”

Next came Viking in 1984, where she became the marketing manager when the Penguin offices were in World’s End, Chelsea. A shy, quiet young writer called Alex Garland arrived on the scene soon after with his Thai island novel The Beach.

“Someone in the office was going to Thailand for her honeymoon, so we created a campaign by sending mysterious cards to booksellers and got her to post them all from Thailand to bookshops around the UK.  People were quite freaked out, but it certainly got the book attention.”

Talking of islands, another of her authors was Sir John Mortimer, the creator of the Rumpole novels, legal dramas that were developed into Thames Television’s Rumpole of the Bailey series seen between 1978 and 1992.

“He was adamant that we go to Guernsey because he said, ‘They sell a lot of my books there.’ We had to go on a tiny plane with propellers and when John saw it, he really lost it. He was terrified of flying but we soldiered on with the help of copious quantities of champagne. Those were the days. ”

“When we landed, John greeted the local bookseller with, ‘Tell me, do they still film Bergerac here?'” referring to another British crime series.

“And John turned to me and said, ‘We’re on the wrong fucking island.'”

In 1997, Harington returned to PanMac, this time as publisher, helping re-launch US crime writer Janet Evanovich and making her first trip to Frankfurt. She has notched up around 15 fairs, with PanMac, Random House—here she looked after communications for CEO Gail Rebuck from 2003 to 2008—and Hachette.

“When I arrived at Hachette,” she says, “it was growing rapidly through acquisition and we had all our separate houses sort of tacked onto our existing stand. Tim [Hely Hutchinson, CEO] said, ‘Welcome to the Hachette Village,’ and I said, ‘It looks like the Hachette Shantytown.’

“Tim roared with laughter and the first thing I had to do was create a new stand.”

The trade-show “tower stand” years followed, although that has now given way to a single-floor setup.

“It wasn’t meant to look hierarchical,” she says, “but some felt they couldn’t ‘climb the tower,’ as it were. David [Shelley, CEO] and his team much prefer us all to be on the same level.”

That greater leveling-out and social conscience, reflected in the publisher’s Changing the Story initiative, which looks at diversity and inclusion and is spearheaded by Shelley, is something she has seen grow at Hachette.

“Changing the Story is one of the ways the company is changing,” Clare Harington says. “I’m glad to have been here while that builds, and I’m full of admiration for what David is doing. The future for Hachette is fantastic.”