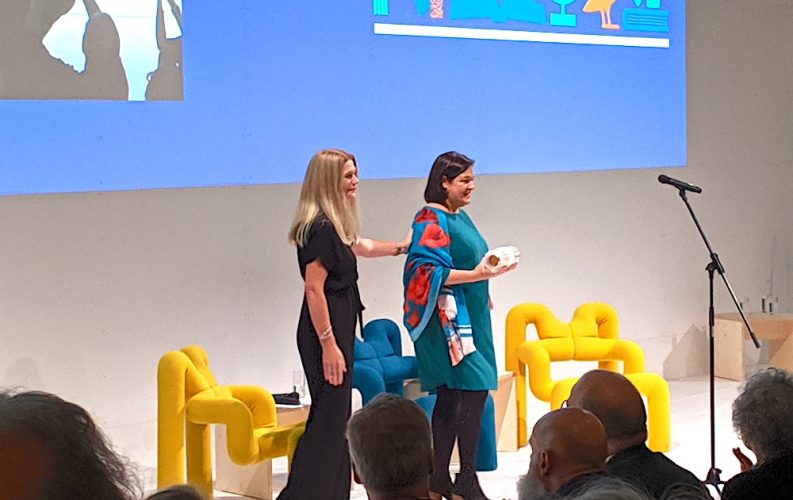 ‘I believe we will surprise you,’ said Canada FBM2020 president Caroline Fortin, as the Frankfurt Guest of Honor scroll passed to her from NORLA director Margit Walsø. 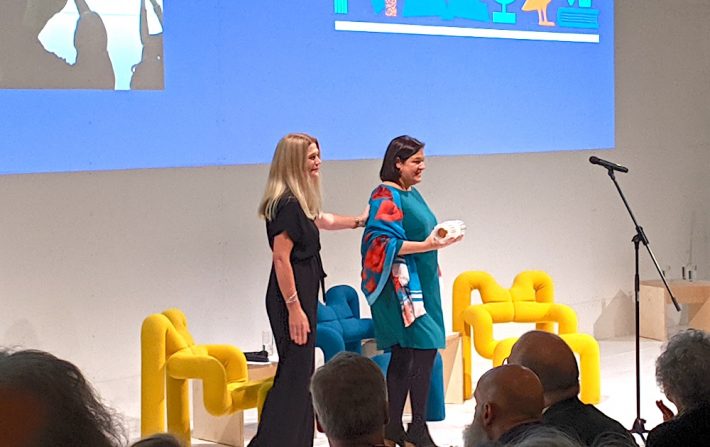 On Sunday (October 20) afternoon, the Frankfurter Buchmesse’s Guest of Honor scroll passed from Norway to Canada during the fair’s Handover Ceremony, marking the closing of Norway’s 2019 program and the beginning of Canada’s year-long turn in the Frankfurt Book Fair spotlight.

Under the slogan “The Dream We Carry”—inspired by Norwegian poet Olav H. Hauge’s poem, “It Is That Dream”—Norway’s Guest of Honor program brought more than 100 authors to the Frankfurt Book Fair and presented discussions on freedom of expression, Sami literature, feminism, nature, diversity, and more.

NORLA – Norwegian Literature Abroad, the organizer of Norway’s Guest of Honor program, reported that 510 Norwegian titles will be published in Germany by the end of 2019, and that 229 of these titles are new translations into German.

“We wanted to open the hearts of German readers,” said Walsø at the ceremony, and to “inspire joy and pleasure with literature.”

Walsø also specifically pointed to broad support from Norway’s book industry as a factor in the program’s success. “Everyone should be on board,” she said. “I felt that it was actually [all of] Norway who came here to do this presentation.”

Looking ahead to the next steps as NORLA continues its work promoting Norwegian authors and books abroad, Walsø said, “This is not the final [step]; it is the opening for many great things for Norwegian literature.”

As Canada now begins is Guest of Honor year, Fortin said, “Our plan is to make sure all Canadians are represented.” This message is reflected in Canada’s slogan, “Singular Plurality,” and Canada FBM2020 is working to bring many voices and perspectives to Frankfurt in 2020.

“The challenge is to present something that is unique and represents everybody. I think we are going to get there,” said Fortin.

Finding these diverse voices, said Fortin, “was quite a journey.” Following the announcement in October 2016 that Canada would be Frankfurt’s 2020 Guest of Honor, Fortin said she and her colleagues began traveling across the country meeting with publishers and associations and “learning how diverse [Canada] is.”

To Walsø, Fortin said, referring back to Norway’s slogan, “you successfully carried the dream, and we we hope Canada will also carry the dream.”

And to the audience, Fortin expressed her hope that the 2020 program would bring “all Canadians together,” and concluded with a look ahead: “We have a lot of work ahead of us, and I believe we will surprise you.”