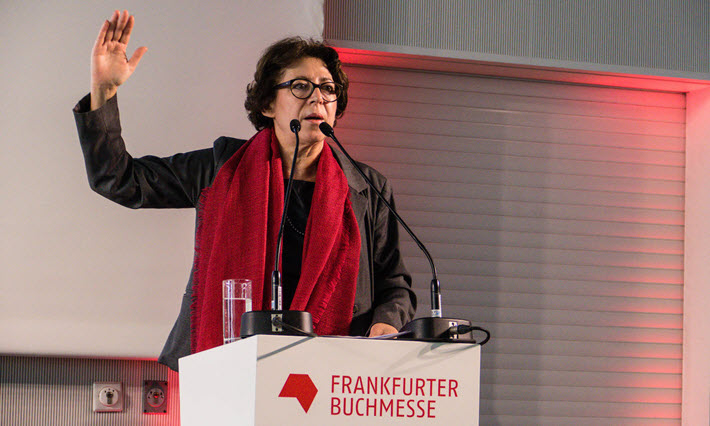 Valérie Lévy-Soussan, founder of Audiolib, has tracked France’s audiobook market from CDs in the early 2000s to streaming and download formats thriving today. 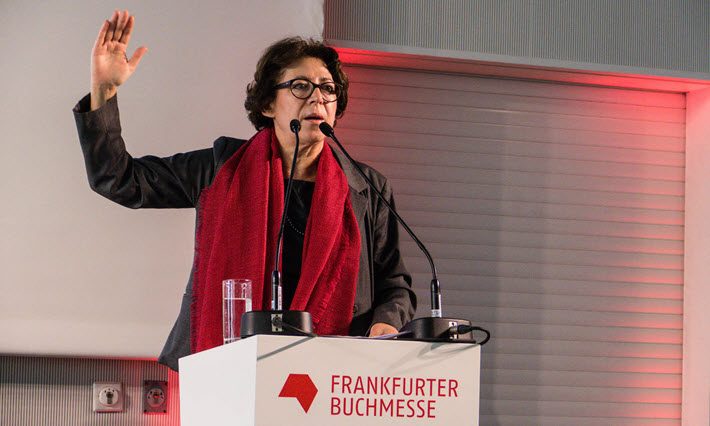 ”Born With Mobile Devices in Their Pockets’

The Frankfurter Buchmesse’s inaugural Audio Summit conference on October 17 in Hall 4.2 featured speakers from several countries who provided a global look at the fast-growing audiobook market. As such, the conference served as a centerpiece to the fair’s new and very popular Frankfurt Audio focus area and its programming.

The summit was keynoted by Michael Krause, managing director for Spotify in Central Europe, who was followed by a pace-setting panel.

The “Global Market Snapshot,” a panel, brought together regional international perspectives on the industry’s understanding of audiobooks and other audio products and their potential in the world industry.

Well known to Publishing Perspectives readers, Michele Cobb, executive director of the US based Audio Publishers Association, joined the panel with her organization’s extensively researched observations and outlooks to present.

Ama Dadson of Ghana-based AkooBooks Audio had recently spoken at the International Publishers Association (IPA) second Africa seminar in Nairobi and has also presented her work this week in the Publishers Conference at Sharjah International Book Fair.

And Valérie Lévy-Soussan, the founding director general of Hachette Livre’s Audiolib, traveled from Paris with the latest word from a market that, at least on the world stage, is much less well known for audio than some other markets.

Lévy-Soussan was elected in March to become president of the audiobooks division of France’s Syndicat national de l’édition (SNE), succeeding Paule du Bouchet of Gallimard in the role.

Audiobooks: A Once and Future Format

In an exchange with Lévy-Soussan shortly before the opening of Buchmesse, we started by noting that because Audiolib was founded in 2007, it began its life in the “first era” of audio when the main medium of distribution was a CD.

Today, the download and streaming capabilities of digital have made audio a “born again” format, coming back to life because digital formats are more convenient to listen to than CDs or, before that, cassette tapes. Is it safe, we asked Lévy-Soussan, to assume that it’s the same in France, this effect of a reborn format?

But it’s not only the download capability of digital and ease of use, but also the size and variety of the available catalogue, and the awareness of the medium among a broader audience.

In 2007, there were only CDs. Cassettes had disappeared in France at least two or three years before, and the audiobook market was absolutely flat in France, largely dominated by children’s books and CDs.

In 2004, I had the chance to meet with Don Katz, the founder of Audible.com, who had first this vision of combining digital technology with audiobooks to listen on the go, and who wanted to create a joint venture in Europe with Bertelsmann’s book club.

“Beginning in 2019, we’re seeing that 14 percent of audiobook users in the French population are in the 15-and-older age bracket, up two points compared to 2018.”Valérie Lévy-Soussan, Hachette / Audiolib

Quickly, it was clear that in France, there wasn’t enough spoken audio content to build a market.

At that time, Hachette—which had experimented with the increase of audio in the United States—and Albin Michel, my shareholders, believed in the development of the digital audio format as a future for reading for new generations and created Audiolib, the first to develop an audiobook catalogue of contemporary, non-abridged editions.

Audiolib launched this catalogue with MP3 editions and CDs, and appealing physical packages because this format allowed us to have non-abridged formats—French people hate digests—at a competitive price.

Of course, we also were present at the same time in digital, but non-musical download platforms weren’t developed, so we first saw the market very responsive with this new offer through MP3/CD in physical bookstores. Because in France we have a large bookstore network, we’ve had success primarily with book lovers and heavy readers—and that’s thanks to the mediation of booksellers.

Then, since 2016 and the development of platforms and the increasing prevalence of smartphones, we’ve seen a significant increase in the fully digital formats, with different kinds of audiences and readers.

And now, audio is much easier to find and to get, and everybody is equipped with smartphones. It looks more appealing to users of generations born after 1999 with mobile devices in their pockets, and the growth is here.

Publishing Perspectives: How important in the French audio market are subscription models in audio?

VL-S:  As in many countries, we don’t have yet overall figures for digital downloading and streaming. In France, for audiobooks, we have a limited subscription—one book per month—and it’s more than 50 percent than per-unit sales.

PP: Do you find in France that, as in the UK, there may be more men than women among consumers of audiobooks?

VL-S: No. We tend to see that there are more women among readers in general, and also in audio formats, but we see, especially in digital and for newcomers to the popularity of audio, more men are being converted to this format.

I suspect that we recruit these new customers among non- or occasional readers.

PP: What are your main points of sale? Do your customers come to your own site for Hachette and Albin Michel audio, or is much of it sold through larger retailers?

Audio “looks more appealing to users of generations born after 1999 with mobile devices in their pockets, and the growth is here.”Valérie Lévy-Soussan, Hachette / Audiolib

VL-S: For physical audio, independent bookshops are still strong, but of course, large retailers are present. In digital retail, we do not sell directly to customers, but from our audiolib.fr website we have affiliation links to the main digital download platforms.

PP: Is there a widespread response to podcasts in France? Are publishers using podcasts as marketing tools or in other ways?

VL-S: In France, even if the podcast audience and availability of content is quickly increasing, there’s much less of it than in spoken English markets.

Original podcasts appear everywhere, usually as a complement to radio broadcasts, and some platforms are launching podcasts. Publishers are beginning to use them as marketing tools for authors, or as a a medium for pre-sale advertisement, as there are crossover targets between readers and podcast listeners.

But, as everywhere, the question of the business model behind this is not settled.

PP: Lastly, what data points do you have from your presentation?

VL-S: Beginning in 2019, we’re seeing that 14 percent of audiobook users in the French population are in the 15-and-older age bracket, up two points compared to 2018.  By comparison, ebook users in the same research done by Sondage publiés OpinionWay for SOFIA/SNE/SGDL were 22 percent.

And smartphones are the preferred device for 43 percent of these digital users, which marks a trend—and leaves large room for growth.

More from Publishing Perspectives on the French market is here. More from us on Frankfurter Buchmesse is here, and more from us on audiobooks is here.