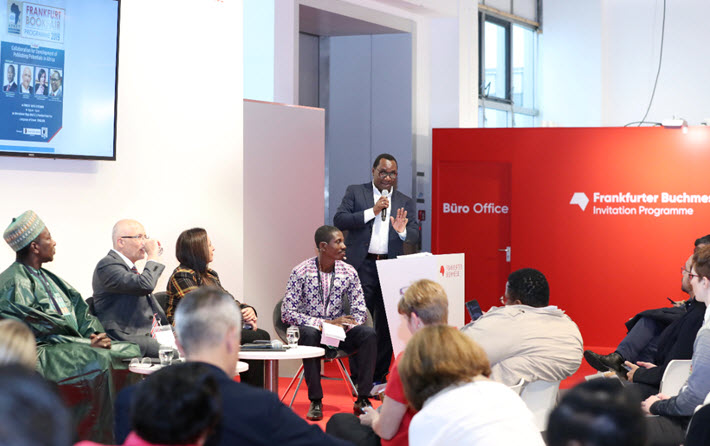 At Frankfurter Buchmesse, the African Publishers Network and International Publishers Association reaffirm their commitment to regional programming for African publishers. 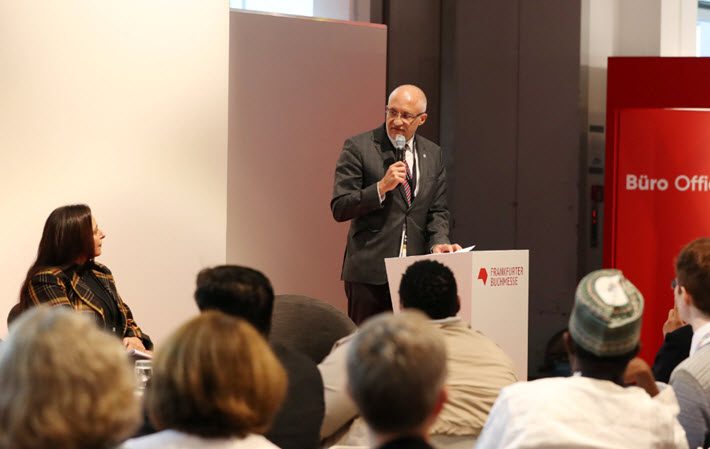 Setzer: ‘The Moral Value of Multilingualism’

As Publishing Perspectives readers know, the IPA’s new regional outreach strategy began in 2018 with its first event in Nigeria, and was followed by a second gathering in Kenya in June. A third iteration of what now are called the IPA Africa Conferences—the change from “seminars” to “conferences” acknowledging the size and complexity of the events—is being planned for Morocco in December 2020.

In his comments to the audience during the hour-long event, IPA’s Setzer—himself a publisher based in Mexico—spoke to one of the most interesting and compelling elements of potential development in African literature and publishing, the multiplicity of languages on the continent. As Elinor Sisulu’s Puku Foundation work is proving in South Africa, even the “small” languages and dialects of Africa can be preserved and promoted through efforts in publishing—in her foundation’s case, in books for children, who quickly embrace and learn languages.

Setzer described the question of the continent’s multilingual development as “something inherent to Africa’s history.”

“Professor Ngugi wa Thiong’o’s keynote speech in Nairobi,” Setzer said, “wasn’t only a rhetorical delight, but also an enlightenment: ‘Monolingualism is the carbon monoxide of cultures,’ he said, and ‘multilingualism the oxygen of cultures.’

“The moral value of multilingualism is something that we, as publishers, have to work hard to preserve. Furthermore, I’m now convinced that multilingualism also represents a great business opportunity for publishers.

“There are more people eager to read and write in African languages, the mother tongues of many millions, than there are in consolidated publishing markets, such as Sweden or Norway. Multilingualism is both part of Africa’s historical identity and an opportunity in its future. What better time for such realization than in 2019, declared as the International Year of the Indigenous Languages by the United Nations?” 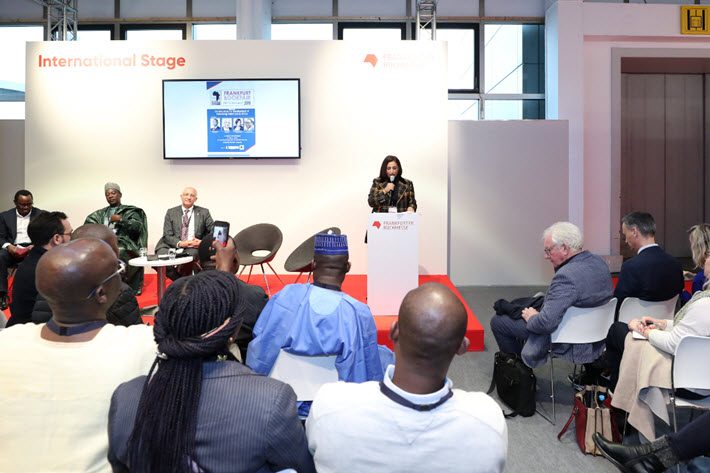 For her part, Bodour spoke to the growing importance of the regional conference approach, “which encourages us to think about future regional events in Asia and Latin America.”

Of key importance to the world body, she said, one key result of the Geneva-based IPA’s work in the African regional events “was validating a scalable approach to increase direct IPA interaction with our members in developing publishing regions and that is very important. We also learned a lot of lessons that will help us in developing a more field-driven approach to our work in IPA, which will undoubtedly enhance publishing connectivity between emerging and more traditional markets.

“In terms of impact on the development of African publishing sector,” she said, “I believe these regional events started a new legacy and a new approach built on tangible action, and nothing but action driven by a community of doers. This is why the first key result we achieved in Lagos was the Lagos Action Plan and an eight-member committee was formed called the Lagos Action Plan Committee to manage the implementation of the plan.

“The Lagos Action Plan quickly led to a clear vision for a roadmap, which was to a certain extent one of the reasons we succeeded in mobilizing more than US$1 million in financial support and in-kind contributions US$800,000 of it came from a generous grant from Dubai Cares, who were galvanized by the promise of the Lagos Action Plan and the potential impact it has.”

What began as a committee formed to support the Lagos plan, Bodour said, now has been evolved to an Africa Action Committee on the initiative of African publishers who have determined that they’ll mount eight pilot projects, each addressing a challenge to African publishing, for presentation next year.

Bodour also noted that at this point, only 10 of some 40 African publishers associations are engaged in IPA’s regional conference work, and that expanding the scale of involvement is another priority for the effectiveness of the effort to cultivate the potential of the continent’s markets on the world stage.

And, as we’ve noted, the upcoming 38th Sharjah International Book Fair Publishers Conference‘s third day of programming has a strong emphasis on African publishing’s development and has been organized in coordination with the work of the IPA group. 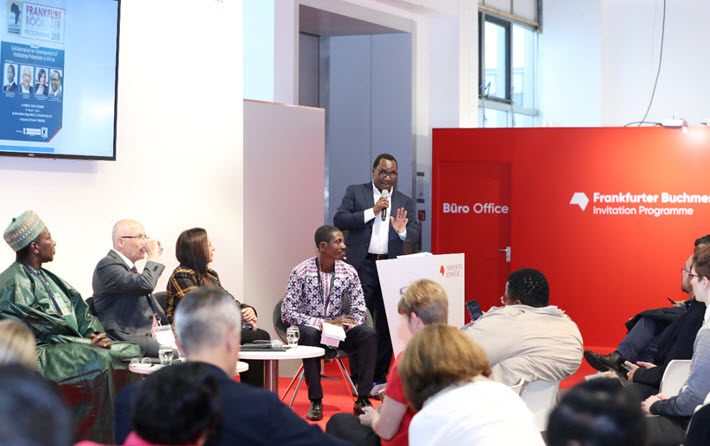 Kenya’s Njagi, in his comments to the audience, spoke quite movingly to a realization for many of the African publishers who participated in June’s IPA Africa Seminar at Nairobi, saying, “Many of us realized that we’re not just Kenyan. And we’re not even just African. We realized that we and our work are global in nature,” an insight that quickly takes the relevance of these developmental conferences beyond the nuts-and-bolts level of building and strengthening the region’s publishing and creates a sense of place in the context of international publishing and literature.

Njagi—a wry speaker who can inject unexpected humor into his presentations when his audience least expects it—moved from these comments about breaking down the isolation felt by many in African publishing to saying, “After all, the last time we saw Bodour, she was kissing a giraffe. The last time we saw the president,” Setzer, “he was being chased by a big lion. But I’m happy he’s here because the lion never caught him.”

What was being revealed here, of course, was the kind of personal bonds that are being formed between the leadership and membership of IPA’s 70-nation roster and the newly engaged publishers of Africa, a growing level of trust and care that bodes well for genuine commitment and progress.

APNET chair Kolawole of Nigeria—whose MBA is from the University of Liverpool—presented APNET awards not only to Setzer and Bodour but also to Michiel Kolman, the immediate past president of IPA. Elsevier’s Kolman was in office at the time of the initial IPA Africa Seminar in Lagos and now serves as the lead for the association on issues of diversity, inclusion, and accessibility. 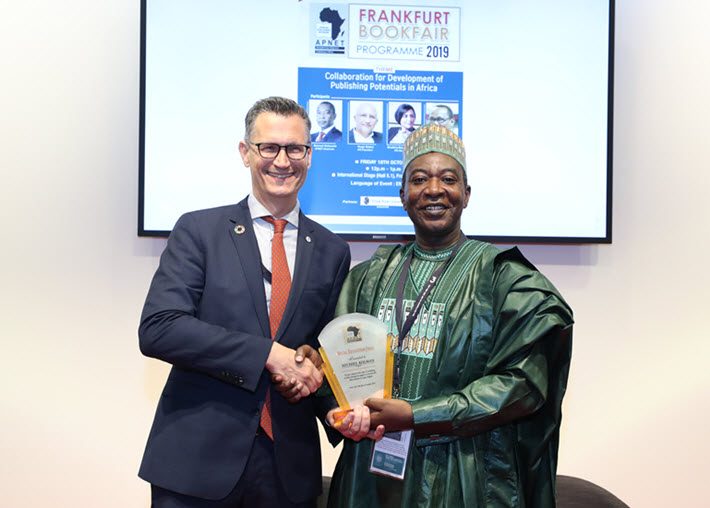 More from Publishing Perspectives on the International Publishers Association is here, more on issues of Africa and its publishing industries is here, and more on Frankfurter Buchmesse is here.

Be sure to read our Publishing Perspectives Show Dailies from the 2019 Frankfurter Buchmesse.

You can download free copies of them all in PDF: