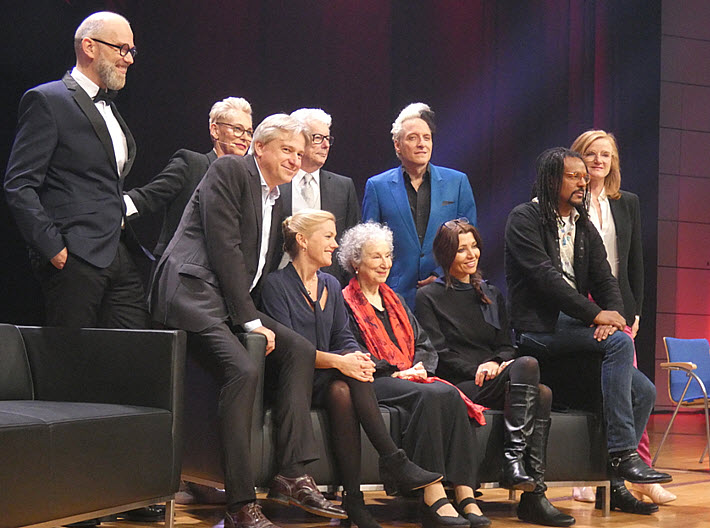 Overall visitor numbers were up at the 2019 Frankfurt Book Fair, where rights trade was brisk and events addressed timely topics including Brexit, feminism, racism, and climate crisis. 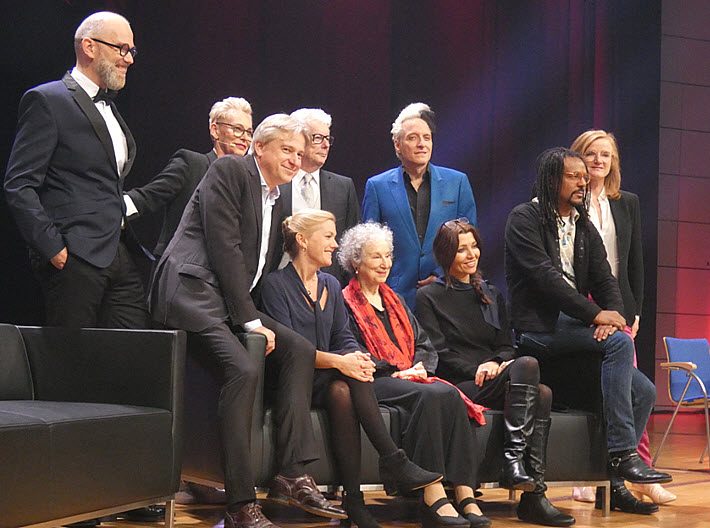 If you thought the the 2019 Frankfurter Buchmesse seemed more crowded than last year, it wasn’t your imagination. Security personnel imposed periodic crowd hold-backs on escalators and at major doorways and thoroughfares for safety and the numbers now prove why: Messe Frankfurt was packed.

Frankfurter Buchmesse reported that on the trade visitor days—Wednesday, Thursday, and Friday, October 16, 17, and 18—attendance was up 1.8 percent, even though the number of exhibitors actually declined a bit—from 7,503 exhibitors from 109 countries in 2018 to 7,450 exhibitors from 104 countries this year.

This year also saw a spike of 9.2 percent in weekend attendance, according to media messaging from the trade show’s organizers. “Frankfurt Cosplay” is a light-hearted magnet to many fans of the fair each year, and it creates foot-traffic challenges at times, as costumed friends sit in large groups on floors and lobbies of the buildings of the book fair to chat and enjoy each other’s company.

Crowding issues aside, the eager attendance of so many on Saturday and Sunday helped to drive visitor attendance grand totals for the week to a reported 302,267 over last year’s 285,024—or 5.5 percent over 2018.

Although we’re not given numbers on the organized events of the week, the sheer complexity of trade visitors’ schedules seems to have supported Frankfurt’s assertion that “never before have there been as many” staged programs, meetings, discussions, and other presentations.

And on the ground, it seemed that never before had there been so much emphasis on current events. A political charge held sway, from the teeming traffic in and out of the issues-driven Weltempfang to new socially relevant work for children, from the cautionary comments of Olga Tokarczuk, the newly minted Nobel laureate from Poland, to a message from Netflix that the streaming giant wants the book industry’s most challenging and culturally specific stories.

Relevance was the driving energy of the week, and publishers seem emboldened by the concerns of consumers. 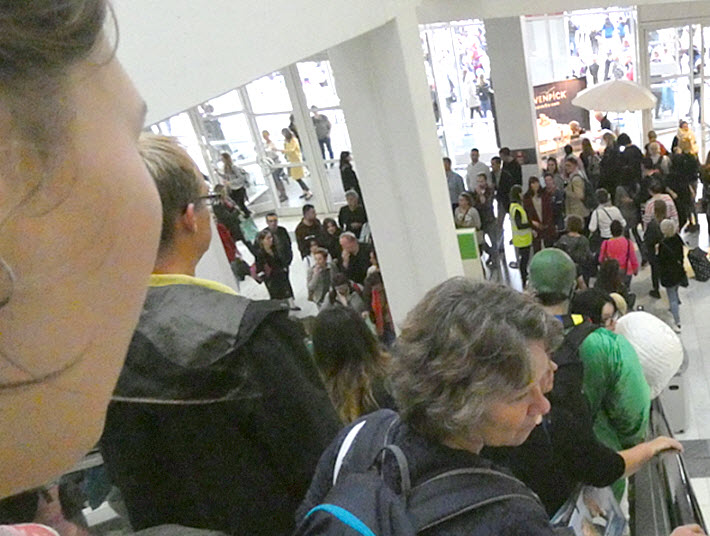 On the elevators of Hall 4 on Frankfurt Saturday with a record turnout of public visitors at Frankfurter Buchmesse. Image: Porter Anderson

The LitAg, as the Literary Agents and Scouts Center is called—along with its associated Publishers Rights Corner program—moved from Hall 6 into the Festhalle (a result of rolling fairgrounds renovations), and 355 agencies are reported to have been active from 35 countries in the rights-trading hub of the fair.

We’re told that 3,750 visitors were in THE ARTS+ programming of conferences, networking, and workshops, while the area—produced with the B3 Biennial of the Moving Image—drew 147,000 people to the area in Hall 4.1.

The BookFest events around the city and on the grounds drew a reported 25,000 people, with about 5,000 of them at the 56 events off-site in the city of Frankfurt.

Heinrich Riethmüller, the outgoing president of the Börsenverein des Deutschen Buchhandels—Germany’s publishers and booksellers association—summed up his impression of the fair this year, saying, “At Frankfurter Buchmesse 2019, publishers, booksellers, authors and fans of literature came together to celebrate literature and to discuss pressing social issues.

“The future of society, human rights and our planet were the topics that predominated at many of the discussions and events. The last five days have clearly shown that books inspire people and strengthen public debate and, with that, free and democratic societies.

“The industry successfully engaged in licensing deals and exchanged business ideas. In addition, we sent out important signals supporting freedom of expression.”

Guest of Honor Moves from Norway to Canada 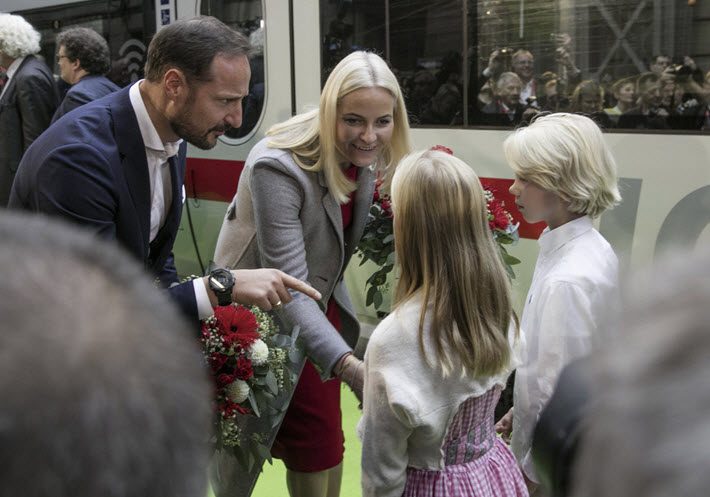 Frankfurt’s Guest of Honor Norway programming is credited with prompting 510 new books by Norwegian authors as well as books about Norway to be published in a single year by 217 German-language publishing houses.

In Sunday’s closing and handover event, Buchmesse president and CEO Juergen Boos echoed Oslo’s guest of honor theme, “The Dream We Carry,” saying, “Norway has shown us how dreams can come true: More than 100 Norwegian authors inspired readers from Germany and around the world.

“Freedom of expression and sustainability were among the focus topics of the events organized by the guest of honor. The project’s organizers–Margit Walsø, Halldór Guðmundsson, and the team from NORLA–succeeded in putting a spotlight on Norwegian literature.”

As Publishing Perspectives readers know, next year Frankfurt welcomes Guest of Honor Canada, with its bilingual theme “Singular Plurality / Singulier Pluriel” representing not only its French and English elements but also its strong First Nations and Indigenous contexts.

And you could hardly have asked for a better Canadian ambassador to the fair than Margaret Atwood.

Fresh from winning half a Booker—the controversially split Booker Prize for Fiction in London she shares this year with British author Bernadine Evaristo—Atwood made her scheduled appearance at Saturday night’s Literature Gala and then served as Canada’s premiere representative at Norway-t0-Canada handover guest of honor event on Sunday.

As Boos pointed out, “Already this year, Canada invited us to discover its literary voices, and with Margaret Atwood as a guest at this year’s Frankfurter Buchmesse we had one of the most important representatives of Canadian literature among us.”

More about the handover ceremony is here from our Hannah Johnson. And Canada’s new site for its turn as guest of honor is here. 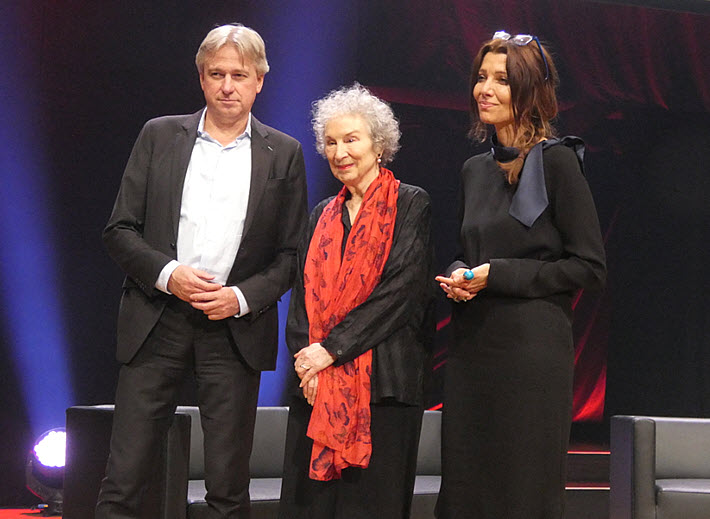 No one who joined a couple of thousand people at Saturday evening’s Frankfurter Buchmesse Literature Gala could have left Messe Frankfurt’s Harmonie Hall with any doubt about the robust common cause that the international publishing industry is making with the world’s concerns about political struggles and the climate crisis.

Here were Atwood, Colson Whitehead, Elif Shafak, Maja Lunde, and Ken Follett. Each author was interviewed by either Radio One’s Thomas Böhm or the free-spirited crowd pleaser Bärbel Schafer of Hessian Broadcasting. And each had an excerpt from her or his work read by actress Nina Petri or by the extraordinarily coiffed author Bela B. Felsenheimer.

“If you’re a woman novelist from Turkey, you’re reminded of your gender as a way of reminding you of your place.”Elif Shafak

Follett was there to talk less about his work than about the new Friendship Tour he’s launching with several fellow British authors, a way to try to tell European publishers and readers that the damages of Brexit don’t cloud the high regard and fellowship that right-thinking Britons hold for their sisters and brothers of Europe. We’ll have more on that from Follett in a separate article.

Of the interviews, Elif Shafak’s was the standout, not only because she and Böhm had the longest time together onstage but also because Shafak’s English is eloquent and generous. (Shafak’s Rumi-based The Forty Rules of Love, we learned this week in Frankfurt, is to be made by Kelly Luegenbiehl into a series for Netflix International Originals. Full story here.)

It can be challenging to write about full-on political issues, she said, “But it can be equally challenging to write about sexuality and gender-based violence,” she said, the less visible layer of a punishing political context. Petri read in German a passage of commentary from the dying Tequila Leila whose 10 Minutes 38 Seconds in This Strange World provide the extraordinary observations of a woman who has been murdered and whose mind outlives her heart by the title’s time period.

By contrast, Atwood’s North Woods-frank commentary sounded a bit dry and terse, but she put her point across about the climate crisis, reminding us that we were warned about this by the Club of Rome. “But then there were still 50 years to go. It’s hard to feel warned for 50 years. Now, we have two years, five years … It’s a little late but it’s not too late.”

“As in every totalitarian regime, those in power do the things forbidden to the people.”Margaret Atwood

Atwood’s best moment came when she was asked about how in The Testaments, her new Booker winner–a sequel to The Handmaid’s Tale–we see a harsh character with a private library.

“Why is it?” Böhm asked Atwood, suddenly with a less showy and more urgent tone of genuine curiosity than he’d had most of the evening.

“Aunt Lydia,” Atwood reminded him is the character he was asking about, the punishing governor of the handmaids.

“She keeps a private library,” he said, “she has books from world literature.”

“Because she can,” Atwood said, triggering a stunning, prolonged round of applause among from the audience. When the crowd was ready to listen again, Atwood explained that Lydia’s books “are forbidden by the regime. And as in every totalitarian regime, those in power do the things forbidden to the people.”

In that exchange, Atwood had endorsed and sharpened the 2019 Frankfurt Book Fair’s tone of concern and commentary, its defense of the freedom to publish and the freedom to read, a dynamic that marked the 71st edition of Buchmesse with a sense of purpose–a growing sense of mission–for what books mean in a world in which wealthy, self-serving leaders flout their privilege and look for ways to curtail the rightful cultural ownership of world citizens.

Frankfurt found a new footing this year for itself, marshaling its unique amalgam of thought and commerce with unusual clarity about the paths that lie ahead and our crucial need for the intelligence of literature. 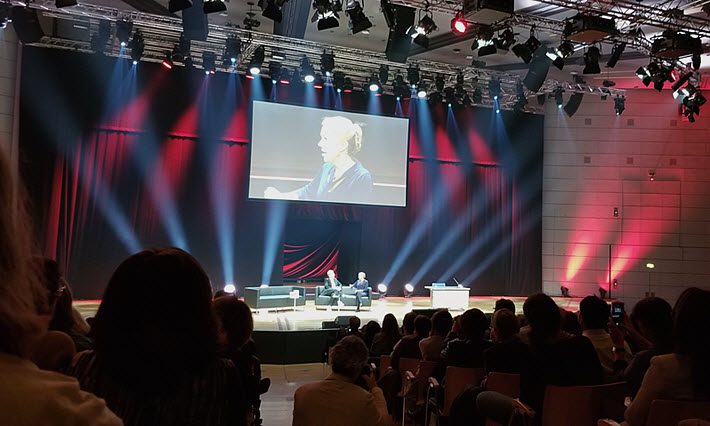 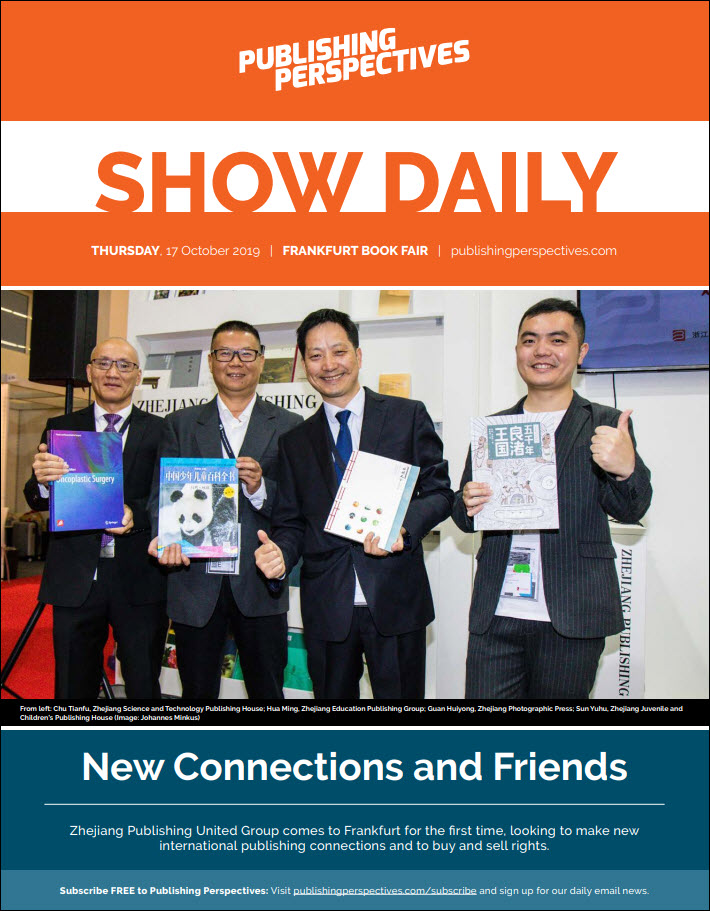 Be sure to read our Publishing Perspectives Show Dailies from the 2019 Frankfurter Buchmesse. You can download free copies of them all in PDF: