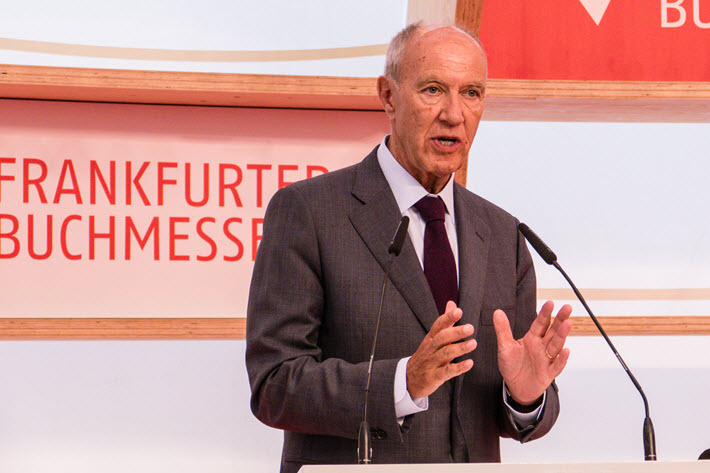 After keynoting at Frankfurter Buchmesse’s opening press conference, WIPO chief Francis Gurry looks at the need for ‘a layer of data rights.’ 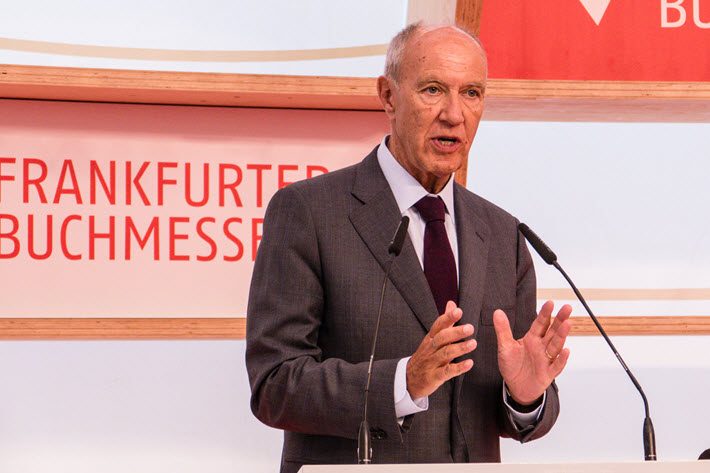 Artificial Intelligence and ‘Unraveling the Conseqences of Tech’

When it comes to high-level views of what international publis hing faces today, few people have anything close to the purview of Francis Gurry, for 11 years now the World Intellectual Property Organization director general.

Hearing Frankfurter Buchmesse president and CEO Juergen Boos at the fair’s opening press conference talk about the accelerating “transition from the analog to the digital and now to the networked, data-driven age,” Gurry is ready with apt eloquence about the effect on so many professionals in the creative industries.

“The term ‘Industrial Revolution,'” he says, “wasn’t socialized until 100 years later. We don’t have that luxury of time to absorb what’s happening to us. And we’re losing our memory. Before we can absorb one thing, we’ve moved on to the next. So we don’t have the memory as a society of what’s happened.

“If you think of the digital evolution, you can’t remember the technologies you’ve been using” as one replaces the other. “So we don’t know the social impact” of successive changes, in culture or in the creative and intellectual businesses.

“We’re now living in a world in which tech is determining the possibilities. Tech is saying, ‘We can do it, so let’s do it.’ And I’m not sure that’s right. Technology should not be the master, but the servant.”

Where this is taking him, though is to what might finally be the broadest possible context of need for change for publishing and nearby creative fields. “The most pressing thing institutionally is that the idea of multilateralalism—the idea of multinational cooperation is under attack. But also the form of multinational cooperation is under attack. The form was created in a completely different world” of slowly evolving debate and policy.

“And we’re all finding ourselves unraveling the consequences of tech.” While that might be the right idea, we can’t move at Old World speed when the landscape is racing by.

This is why, Gurry says, he’s pleased with how quickly the member-state consultations have gone on an entirely new initiative that WIPO, under his direction, is about to reveal in a white paper Gurry hopes can be available early next month.

At issue is artificial intelligence, because AI could well be the most daunting test of intellectual property’s protection, the end run of the new digital paradigm for which the disruption so far has been only a prelude.

When content is being created by something other than a human rationale, so the reasoning goes, how do we know whose intellectual property it really is? How do its rights work? To get it right down to the level of publishing, and old territoriality still prevail? Is anything other than world rights making sense?

WIPO’s initial position paper in early November will open up to the topic to comments—to any and all who would like to participate—and those comments then will be presented with full transparency. A revised paper that takes the commentary into account will then form the basis for “a more structured conversation.”

“The existing intellectual property structure,” Gurry says, “came out of the Industrial Revolution. It’s basically mass production that created the idea that it’s not the product but the process that manufactured it.”Francis Gurry, WIPO

In the end, Gurry predicts, we’re going to see a world in which a kind of “copyright layer” exists atop and around the world of intellectual property, something that can accommodate and interpret the realities of wide distribution at the most extravagant speeds and fragmentation and yet find a meaningful way to represent ownership and rights.

If the European Union meanwhile, he reasons, keeps developing its approaches to the issues of a kind of data-level inventory, it could, he says, end up in a pace-setting position that could give the US market trouble.

“The existing intellectual property structure,” Gurry says, “came out of that Industrial Revolution. It’s basically mass production that created the idea that it’s not the product but the process that manufactured it.”

And if, then, the content itself is again to be superceded in a way by the digital dynamics to come, then “there’s got to be a layer, a layer of data rights” that will exist as a kind of envelope of value around a deeply transformed creative industrial complex.

And how does one brand this new AI program, something with so much potential reach and range into the rights space in which publishing and its sister industries must operate?

“I think we’ll just call it the WIPO AI Program,” Francis Gurry says with a laugh.

Simplify anything you can, in other words, because what’s coming is complicated.

More from Publishing Perspectives on WIPO is here, more on issues of copyright is here, and more on the Frankfurter Buchmesse is here.