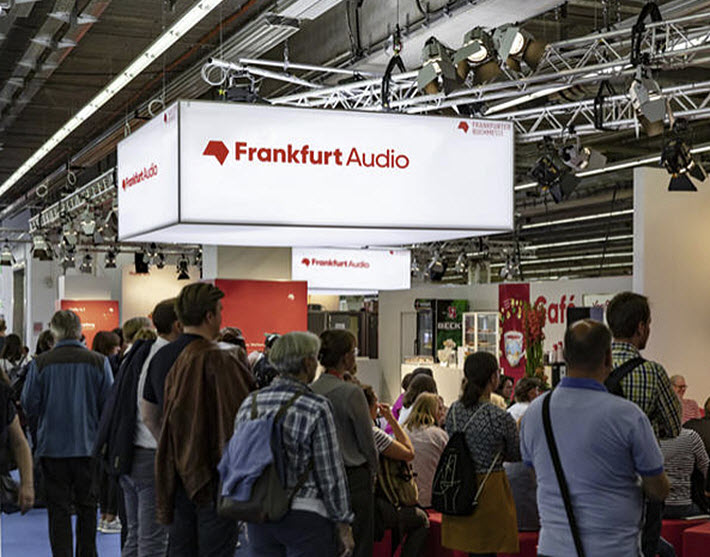 With lectures, panel discussions, and commercial presentations in both German and English, the new Frankfurt Audio Stage in Hall 3.1 will be busy through much of the Frankfurter Buchmesse. 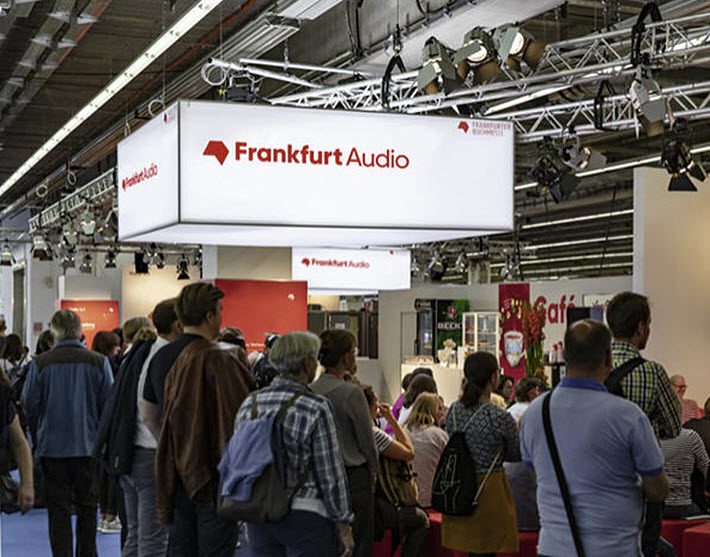 Frankfurt Audio, a dedicated area for exhibitors and programming, makes its debut at the 2019 Frankfurter Buchmesse. Image: FBM

As Many as 35 Events on the Audio Stage

Feeding on the energy of the international book publishing industry’s interest in audiobooks—and their place in many markets as a rare growing format in sales—the Frankfurter Buchmesse’s new focus on audio is ready not only with its own conference, the Audio Summit, but with some 35 events on the specialized area’s stage.

Set in Hall 3.1, images created to promote the new focus area are alluring for their evocations of calm, quiet listening sessions in headphones, but such glimpses of relaxation mask the almost knee-jerk interest sparked for many when audio is mentioned.

In fact, London’s FutureBook conference, set for November 25, has announced a separate stream of programming for the event, with new research data from Harris Interactive on the UK market’s audio scene and sessions on audiobook recording, commissioning, new technology, retailing, and podcasting.

There’s reason for such interest, of course, in such tantalizing announcements as the September report that in the UK, ownership of smart speakers by children has increased by 138 percent since January 2018. That, according to a report at The Bookseller’s Children’s Conference, with The Insight People’s CEO Jonathan Watson saying that girls aged 7 to 12 were most likely to listen to audiobooks in the children’s camp, while overall, 34 percent of children were found to be listening to audiobooks for an average 15 minutes per week.

London programming on the sector was first put into place in the 2016 FutureBook schedule, and the effort at Frankfurt next week is a dynamic follow-on to that kind of focus.

“For professionals from the publishing and audio sectors we offer a first-class program with our Frankfurt Audio Summit, featuring talks on stage from experts in the field.

“Events featuring authors and podcasters, especially at the weekend, are highlights for the fair’s public visitors.”

The Frankfurt Summit on Thursday (October 17), from 2 to 5 p.m., is separately ticketed, and features, among others:

But the area’s stage itself, at Hall 3.1, L59, will be busy with programming all week, and taken as a whole approaches the audio component of publishing’s output and business models from myriad angles.

We’ll quickly hit some highlights for you.

And we recommend that you check the Buchmesse 2019 app for Android and iOS users, in that the most recent information on speaker is found most easily there. Go to the list of event stages at Frankfurt, select the Frankfurt Audio Stage tab, and you’ll be able to click on the events for full details.

“Audiobook Production: Keeping Up With Demand and Creating Listening Experiences” features, appropriately, Michele Cobb, the executive director of the Audio Publishers Association who has led the effort to quantify and illuminate the burgeoning audiobook scene in the States. Cobb in this first session on the stage at 10 a.m. on Frankfurt Wednesday (October 16) is joined by Martin Johs. Møller of Swann Studio; Amanda D’Aceirno, who leads Penguin Random House’s audio publishing group; and Colleen Prendergast, manager of global content partnerships with Findaway.

“Hast du Töne”–Do You Have Tone? at 12:30 p.m. on the 16th features a look at audio solutions from PocketBook and Marschpat, with Enrico Müller from the former and Carina Eigner from Marschpat GmbH.

What you’re seeing then, in just these two events on the stage, is the pattern of the Audio Stage’s programming, a mix of informational sessions and sponsored events in which practitioners in the field will be getting to know each other’s offerings and network with companies and colleagues they need to know. Some sessions are in English, others in German.

“How To Reach a Global Audience and Accelerate Your Audiobook Business” on Frankfurt Thursday (October 17) at 11:30 a.m. features Bookwire’s Eric Bartoletti and Videl Barf-Kar, another sponsored program, this time from Frankfurt-based digital distributor Bookwire.

And on Friday (October 18), “Riding the Wave of Smart Speakers and Voice Assistants–What Publishers Need to Know”  features Axel Reichmann of Google Assistant, John Ruhrmann. another member of the Bookwire team, and Franziska Luh of X-O Projects, with Score Publishing’s Bradley Metrock moderating. 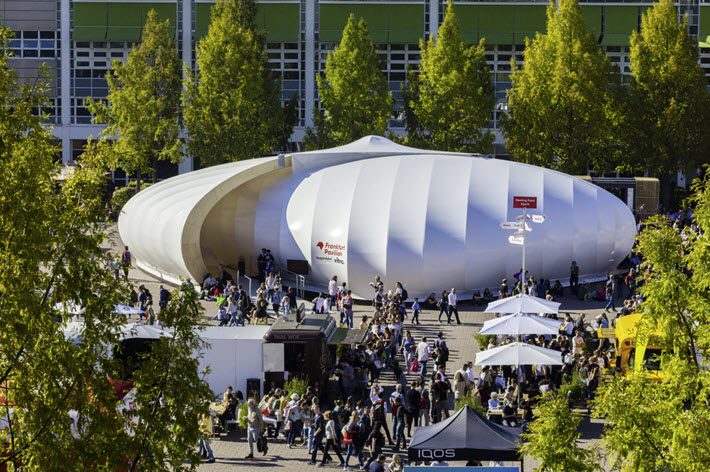 The Frankfurt Audio area also includes a podcast studio installed by sponsoring partner Audio Alliance. Under the motto “create your own podcast,” book fair visitors will stand behind the microphone and create a short podcast episode, themselves, something not unlike the “reading pavilions” of China in which citizens read their favorite literature snippets into mics and then send their recordings to friends as audio gifts.

In a contest, an improvised podcast at Frankfurt will be selected and the winner will be rewarded by Audio Alliance with his or her own original season. An editor and a producer will be at the studio on=site to help and answer questions.

And as the public visitors arrive on Saturday and Sunday at Messe Frankfurt, “We are starting out with numerous German-language events,” Cygan says, “including speakers from the areas of literature, podcasting, music and journalism”.

“Among them will be authors Melanie Raabe and Rafik Schami, Giuseppe di Grazia and Julian Reichelt from two of Germany’s most successful magazines, Bild and stern, the lead singer of the Berlin-based electro-pop band MIA and former techno DJ Talla2xlc. Next year, we’ll expand the events to include a larger collection of international voices—podcasters, authors and narrators—as Frankfurt Audio evolves.”

More information is available online and on the fair’s app.

More from Publishing Perspectives on Frankfurter Buchmesse is here, and more from us on audiobooks is here.