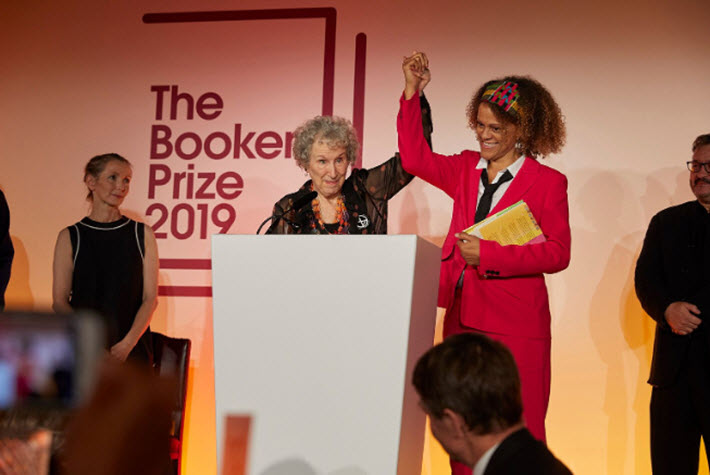 Termed a ‘shock announcement’ by the Booker Foundation in its media messaging, a 1993 rule against splitting the Booker is defied by this year’s jury, led by Hay Festival founder Peter Florence. 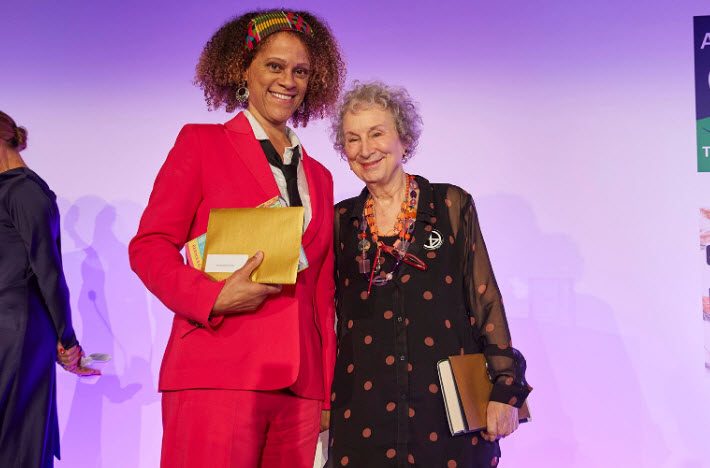 Bernardine Evaristo, left, and Margaret Atwood at London’s Guildhall for the announcement of their joint win of the 2019 Booker Prize for Fiction Image: Booker Prize Foudation

In what will be for some a controversial move, the 2019 Booker Prize for Fiction has been given to both Canada’s Margaret Atwood and the UK’s Bernardine Evaristo at the annual ceremony at London’s Guildhall.

Atwood is being honored for The Testaments (Penguin Random House / Chatto & Windus), the sequel to The Handmaid’s Tale, part of the Gilead body of material that has given Atwood’s career explosive new life with the success of the Hulu television adaptation and that series’ new content.

Atwood now is the fourth author to win the Booker twice. Her The Blind Assassin won in 2000. 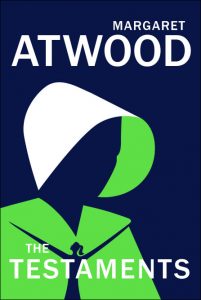 The Testaments is the third sequel to have won the prize, following Pat Parker’s The Ghost Road (1995) and Hilary Mantel’s Bring Up the Bodies (2012).

Bernardine Evaristo is being honored for Girl, Woman, Other (Penguin Random House / Hamish Hamilton). Evaristo is the first black woman to win a Booker.

Girl, Woman, Other is Evaristo’s eighth work of fiction. She also is a writer of essays, drama and content for BBC radio.

Despite the consternation and/or glee of this “joint prize,” as the foundation terms it, this is not the first time the judges have gone rogue and insisted on a split prize. Nadine Gordimer and Stanley Middleton won in 1974 and Michael Ondaatje and Barry Unsworth won in 1992. 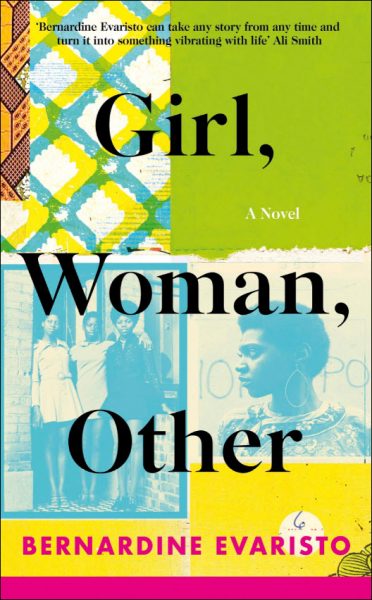 In 1993, the rules were changed so that only one author could win the prize. That 1993 regulation now has been cast aside.

Booker Foundation literary director Gaby Wood is quoted tonight by the Booker’s press people, saying, “Over an agonizing five hours, the 2019 Booker Prize judges discussed all of the much-loved books on their shortlist, and found it impossible to single out one winner.

“They were not so much divided as unwilling to jettison any more when they finally got down to two, and asked if they might split the prize between them.

“On being told that it was definitively against the rules, the judges held a further discussion and chose to flout them. They left the judging room happy and proud, their twin winners gesturing towards the six they would have wanted, had it been possible to split the prize any further.” 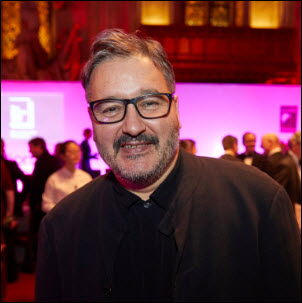 In what some will no doubt call a victims-of-good-literature rationale, jury chief Peter Florence was also quoted, saying, “This 10-month process has been a wild adventure. In the room today we talked for five hours about books we love.

“Two novels we cannot compromise on. They are both phenomenal books that will delight readers and will resonate for ages to come.”

Florence’s fellow jurors this year are:

The winner of a Booker also normally can expect to benefit from a significant boost in sales and visibility, of course. 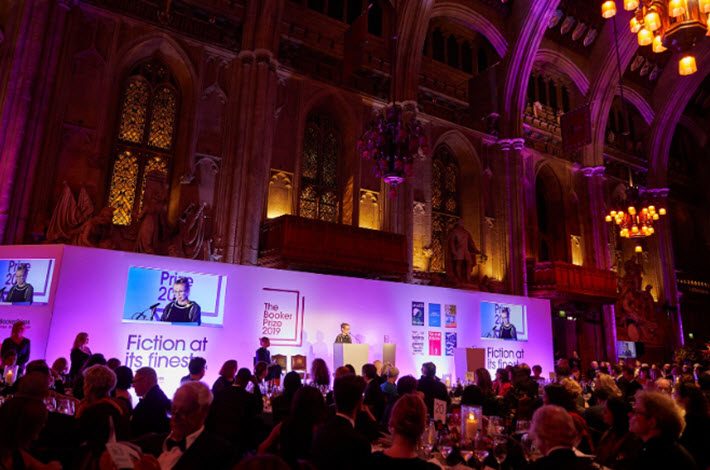 Publishing Perspectives readers will detect a double connection between the looming Frankfurter Buchmesse here in Germany this year and recent prize announcements, the one tonight and the other last Thursday.

Atwood is scheduled to be part of a Saturday evening gala event at the Messe Frankfurt’s Congress Center, as we’ve reported. Organizers of that event, which also features Ken Follett, Maja Lunde, Elif Shafak—who was shortlisted for the Booker (no threeway joy there, apparently)—and Colson Whitehead.

The Saturday tour is part of Frankfurt’s BookFest, and tickets for it, maybe moving faster than before now (€24.50, or US$27.25), are available here.

And as we reported today, Olga Tokarczuk, the winner with translator Jennifer Croft of the 2018 Booker International Prize, will address the trade show’s opening press conference on Tuesday (October 15), having been named the 2018 Nobel Prize in Literature laureate. She speaks in the Frankfurt Pavilion on the Agora.

The four other shortlisted authors for the Booker Prize for Fiction this year were:

As Publishing Perspectives readers will recall, the Booker’s longlist was announced in July.

The shortlist featured four female authors—Atwood, Ellmann, Evaristo and Shafak—and two men, Rushdie and Obiama. Nigeria’s Obiama was shortlisted for a second time, and An Orchestra of Minorities is his second novel.

Each shortlisted author receives £2,500 (US$2,997) and a specially bound edition of her or his book. 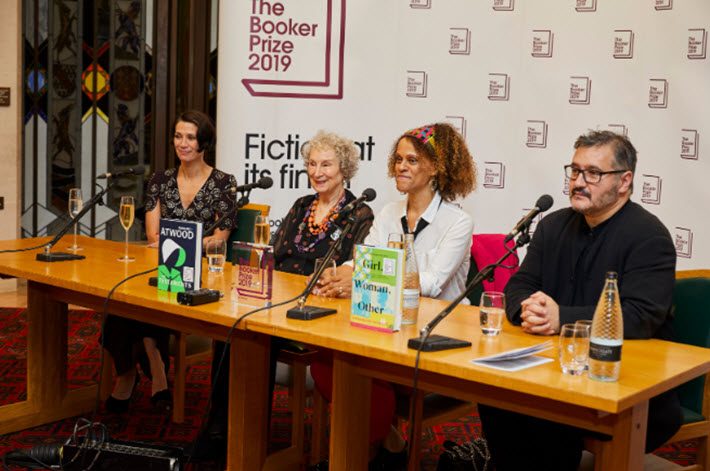