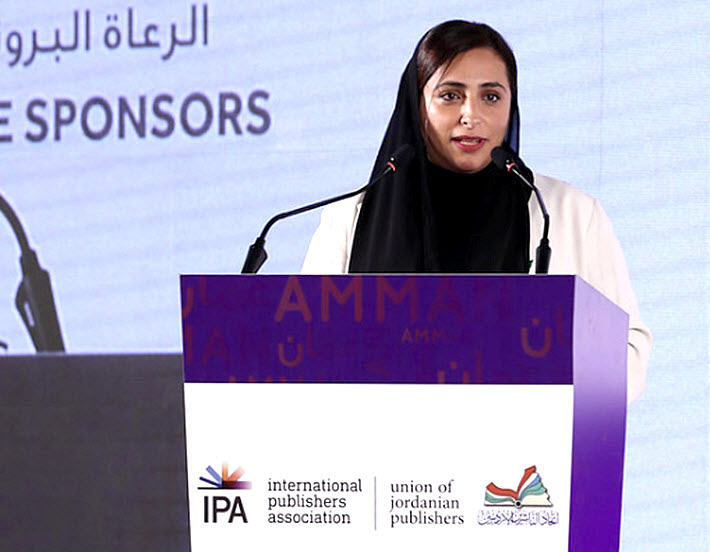 Catching a willingness to engage at the Middle East seminar in Amman, the International Publishers Association vice-president urges publishers ‘not to play the victim.’ 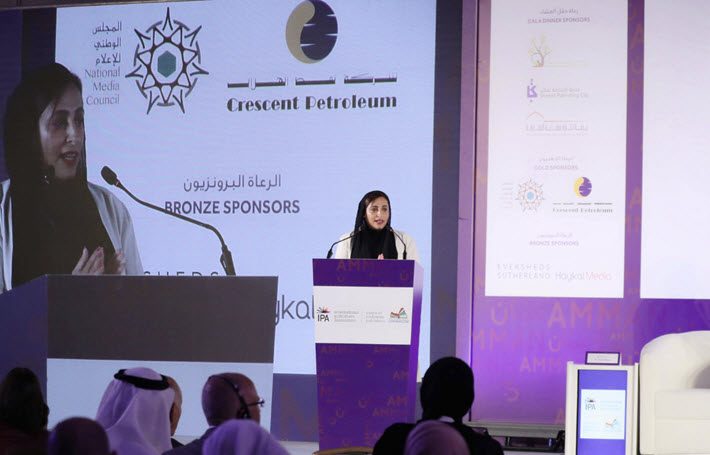 As the guiding energy behind the IPA’s still-new initiative in developmental conferences, Bodour may have surprised some in her audience, describing a robust alternative to talking their points into paralysis.

She told the assembly that in rewriting her Day Two welcoming address, she wanted “to participate in shaping a new direction for the publishing industry in the region, drawing in more readers, and creating a clear path for the future.”

The adjustment was significant, a timely gambit to capture an energy more motivational and actionable than theoretical and academic.

Unlike the original 2018 African seminar in Nigeria—a conference devised with a “‘Lagos Plan” roadmap as an anticipated outcome—the inaugural Middle East meeting in Amman had felt from the outset to be more exploratory. There had been a question about how earnestly the 40 or so speakers in the event, for example, and how candidly they’d they could make their cases.

But within hours of the start on Monday of the Middle East seminar in Amman, what was heard during breaks was, “Everyone is being so frank.” And it was said with approval.

Produced in association with the Union of Jordanian Publishers and organizers of the Amman International Book Fair, the program showed that this is a region ready to talk and act, and Bodour’s comments reflected that.

Here’s the text of her remarks.

“There’s no doubt,” she said from the lectern, “that when a country, a region, or a nation is suffering from a crisis and facing challenges, there are usually two intellectual trends” at play.

“It’s not only the Arab publisher and writer and reader who suffer from difficulties. Publishing is a profession full of technical, material, and political challenges all over the world.”Bodour Al Qasimi, IPA vice-president

“The first trend drowns in attempting to analyze the crisis. It tries to create a deeper understanding of its causes and focuses on them until it comes to a standstill. This trend can’t spot a way out or see any possibility of survival.

“The second trend refuses to surrender to challenges or crises, working on a small or large scale to rectify the situation even in the weakest of hope or the smallest of steps.

“We’re here today because we wish to follow the second trend, rejecting self-deprecation, playing the victim, or giving up on so many challenges that face an Arab intellectual renaissance.

“This second trend doesn’t believe that our reality is our destiny. It believes that the Arab nation, like other current and former nations, can hold onto knowledge and science to survive and reach safety.”

“It’s not only the Arab publisher and writer and reader who suffer from difficulties. Publishing is a profession full of technical, material, and political challenges all over the world.

“The publisher and the Arab writer and reader have golden opportunities to develop the publishing sector and the book industry, and promote reading as it’s open to publishers, writers and readers around the world.

“Yes, we have challenges in our region.

“We all know that these are real challenges. They’ll be waiting for is when we return to our work and offices tomorrow.

“We must remember that in the past few years, some Arab publishing houses have reached international caliber.”Bodour Al Qasimi, IPA vice-president

“But as we reflect on these challenges, we must remember that we’re here to discuss them openly and transparently. It’s a healthy and important initial step to setting the right course of action.

“We must remember that an Arab city, Sharjah, has been chosen by UNESCO to be the World Book Capital this year. It’s not only an honor bestowed on Sharjah but also a tribute to the efforts of the industry of thought, science, and writers in the Arab world today.

“We must remember that in that same Arab city, the third largest book fair in the world is held each year, attended by writers, thinkers, and decision-makers from around the world, and most importantly attended by thousands of children and young people: the readers of the future.

“It’s quite clear with a simple online search to see that there are many serious attempts to create and disseminate Arabic content on different digital media, and there are thousands of Arab readers who benefit daily and freely from these modern digital platforms.

“We cannot overlook these achievements and many others. We should realize their significance as they represent proof that we are moving in the right direction.”

“Esteemed guests, when I think of the future, a poem by Gibran Khalil Gibran about children comes to mind, as he says:

“For their souls dwell in the house of tomorrow, which you cannot visit, not even in your dreams.

“For life goes not backward … nor tarries with yesterday.”

“Yes, we can’t turn back time. The publishing industry in the Arab world shouldn’t go backward. We stand on the crossroads between the past and the future.

“The artificial intelligence revolution is transforming the way we learn, read and disseminate knowledge in a completely radical way. We cannot predict the way we’ll read and learn in the near future, but we should anticipate what’s to come and prepare for it, accordingly.

“There’s a new generation that sees digital devices as an integral part of their personalities and we can’t impose anything on them. On the contrary, they impose change and development on us.”Bodour Al Qasimi, IPA vice-president

“There’s a new generation that sees digital devices as an integral part of their personalities and we can’t impose anything on them. On the contrary, they impose change and development on us.

“Therefore, I’m very happy to see so many young attendees. They’re working passionately within this sector, because their ideas are the closest to reality and they’re aware of the needs of the new reader, [of how important it is] to develop the appropriate content and channels.

“So, we must support them with financial resources, experience, and encouragement in order to help them succeed, flourish, and take the publishing industry safely into the future.

“I invite all Arab publishers to continuously interact with the IPA, to join the various technical committees, and to attend the training workshops held on the sidelines of book fairs around the world to benefit from international experiences, exchange ideas, and open new markets for their books.

“Thank you to everyone who contributed to the success of this conference, directly or indirectly. I hope to celebrate more of your achievements and success when we meet again.

“Assalamu alaikom wa rahmatullah wa barakatoh. [Peace be upon you, with God’s mercy and blessings.]”