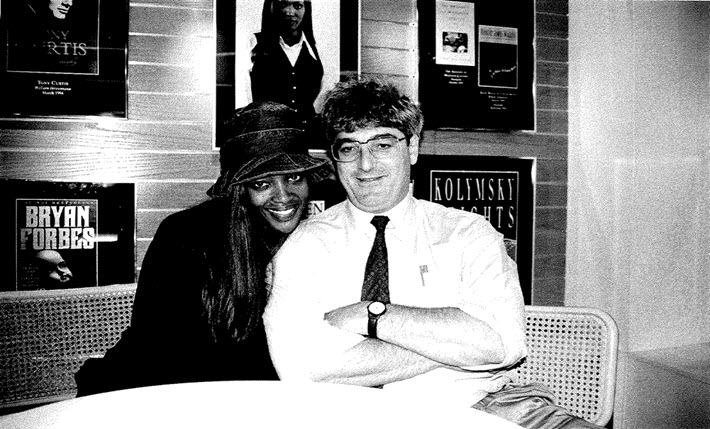 ‘A physical representation’ of the world publishing industry, the Frankfurter Buchmesse, says Richard Charkin, is a community. 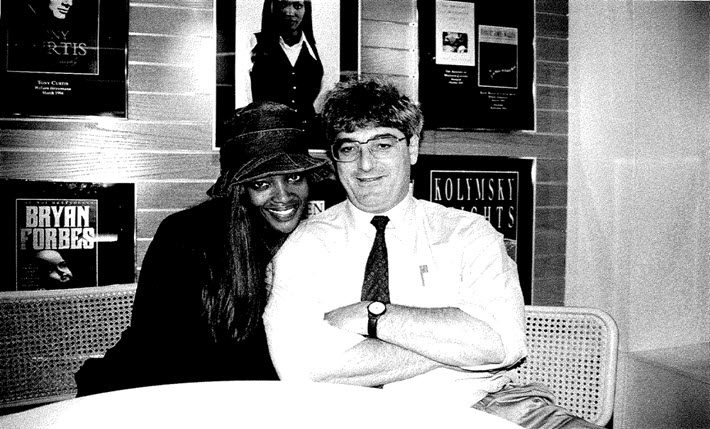 With an author, during one of Charkin’s 46 Frankfurter Buchmesse trips. Image: Provided by Richard Charkin

‘The Centerpiece of the Publishing Year’

At this time of year, the English cricket season ends with a series of five five-day, seven-hours-per-day matches against Australia ending in a 2-2 draw, but with Australia retaining The Ashes, bamboozling all Americans and nearly everyone else.

The Brexit shemozzle continues to fail to reach a conclusion. Literary agents return from their palaces in Tuscany, and authors from their shepherds’ huts in the Cotswolds. The Booker and other literary prizes gently move from longlist to shortlist to inevitable controversy. The big guns of fiction lay down their wares for the coming holiday season (known quaintly in the UK as Christmas).

So publishers’ thoughts turn to Germany and more specifically the Frankfurt Book Fair.

This will be my 47th Frankfurter Buchmesse. I missed one in 1992 when attending Harvard’s Advanced Management Program. The highlight for me from that expensive education was the discovery that being a manager did not have to involve being good at everything. I concluded, perhaps unwisely, that I was better at things I enjoyed and that I should avoid things I disliked.

As a result, I’ve made it a rule to have as little as possible to do with the allocation and design of office space and business-plan spreadsheets, which are generally simply a higher-tech version of eviscerating goats for their entrails to tell the future.

I remember my first Frankfurt in 1972. I can’t remember why I was there, but I have a clear recollection of the shock and awe of the size, of the event, the masses of people, and the loneliness of the crowd. Everyone seemed to know everyone else but I knew nobody. When eventually I spotted a familiar face, she was too busy even to acknowledge me.

Frankfurt is clearly the centerpiece of the publishing year. There’s business of course—deals, rights, discoveries, hyped advances—but it’s more than that.

It’s a physical representation of the global publishing community, as are all the other book fairs and organizations. While technology has changed the way we work, particularly how we communicate, nothing, I hope, can replace human interaction in the real world (if Halle 4 can be described as the real world).

Back in the early 1990s, I was involved in a strategy review of a B2B operating unit of Reed Elsevier, a unit now called Reed Business as part of RELX. Our strategy consultants told us to focus on business communities in which the Reed group had plenty of assets, which could be used synergistically—remember that word?—to reinforce sales, develop a dominant market share, and thus enhance margins. We looked at scores of business units in industries from aviation to Hollywood films, Dutch agriculture, IT, real estate, transport, and more.

In no case did we find the critical mass to dominate the sector. Except one. You’ve guessed it. The book industry.

“This is the community in which we all operate and whose participants need to understand the whole network if it’s to function optimally.”Richard Charkin

At the time, we owned the leading German library and bookseller information publisher K.G.Saur; London Book Fair; the “ABA,” now known as BookExpo; what became Books+Publishing in Australia; Publishers Weekly; Library Journal; Bowker; and trade shows in Japan and around the world—I’ve forgotten most of them.

So what happened after we identified this marvelous opportunity? The individual units were dispersed and the opportunity missed. Ah well, that’s corporate life and that’s the fate of many business strategies.

However, what that episode triggered in me was a recognition of the importance of the community for book publishing.

This is the community in which we all operate and whose participants need to understand the whole network if it’s to function optimally. Trade shows are clearly among the principal facilitators, but there are others. For instance in the UK, there’s The Book Society in London, of which I’m proud to be honorary president; and Motovun, a group of friends who like editing exceptional books; and, importantly, for our future the Society of Young Publishers.

In the interest of transparency, I should say that I serve on the international advisory board of the Frankfurter Buchmesse, and that Publishing Perspectives is a project of Frankfurt Book Fair New York.

That said, after 46 years, I still get a sense of anticipation as the fair approaches and I can’t leave you without sharing the old, grainy, and embarrassing photograph of me and the author of one of my least successful projects. I hope you’ll have a more profitable and enjoyable Frankfurt 2019.