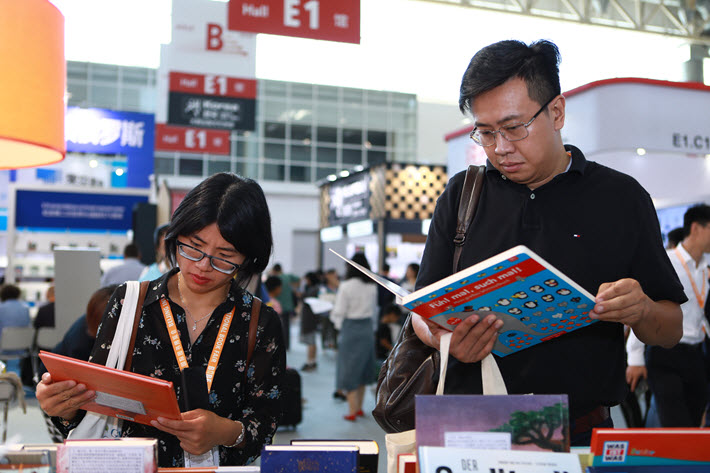 Streaming an interview with an astronaut to 60 million students in 80,000 schools in China was one of this year’s feats at the 26th Beijing International Book Fair. 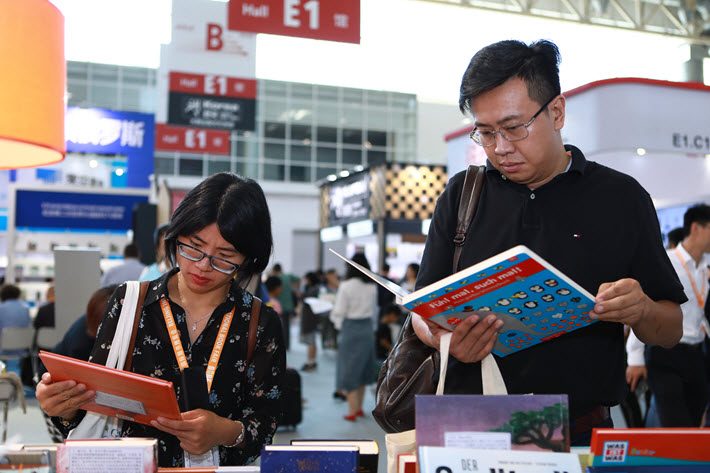 At the German Pavilion in the 2019 Beijing International Book Fair. Image: BIBF

Lin on BIBF: ‘The Go-To Fair for the Far East’

Our annual conversation with Liying Lin—the director of the Beijing International Book Fair (BIBF)—follows what the company has reported was a turnout of more than 320,000 visitors.

As Publishing Perspectives readers know, the sprawling event saw more than half its 2,600+ exhibitors arrive from overseas and was staged in roughly 106,800 square meters of space covering eight exhibition halls at the China International Exhibition Centre.

Lin’s background includes studies at the University of Washington, the People’s University, and Heilongjiang University. In addition to her work as director of BIBF, she’s the managing director of China Publications Expo International. And she’s vice president of the China National Publications Import and Export Group.

We open our questions for Lin by asking for her overall perception of how the 26th iteration of the event played out from her managerial viewpoint. 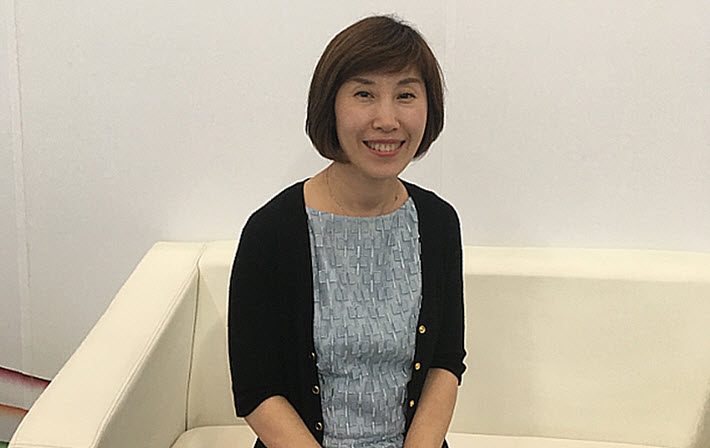 Liying Lin: I think it’s fair to say that we’re more than satisfied. Each year seems to be bigger and better, but this year has been exceptionally good.

I feel sure that our exhibitors would say that, too, if the figures are anything to go by: We recorded 5,996 partnership deals; of which 3,840 were export or co-publishing and 2,156 were import deals. All these figures show a healthy increase over last year.

“It’s clear that publishing is no longer just about books [and] BIBF has expanded into a wide spectrum of opportunities in cross-sector and cross-media content.”Liying Lin, BIBF

We also had more exhibitors than ever from 95 countries and regions and 1,600 overseas exhibitors, which is also a record. We welcomed Portugal and Kazakhstan, countries who were exhibiting for the first time, and we hosted Romania as Country of Honor.

Lastly, it’s satisfying to see how BIBF is regarded as the go-to fair for the Far East. It acts as the central hub for the industry for the entire region and as such, attending is essential for any publishing professional who wants to do business beyond the Western world.

PP: In which areas do you think the fair has made its greatest strides in 2019?

LL: I think it’s clear that publishing is no longer just about books, and BIBF truly reflects the direction that the industry is taking in China.  BIBF has expanded into a wide spectrum of opportunities in cross-sector and cross-media content production and distribution.

Our exhibitors this year were drawn from many backgrounds—entertainment, education, and technology—but the one thing they have in common is how to find and curate content and how to make the best use of IP, whether online, in apps, video, cartoons, games, education, or other formats.

Reaching out to these new types of exhibitors gave us the chance to make the fair as exciting as it was.

‘How Companies Truly Understand Their Market’ 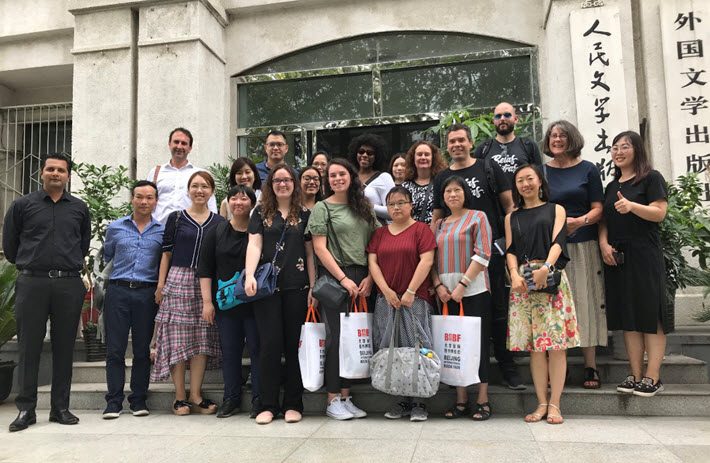 A group of new exhibitors at the 2019 iteration of the Beijing International Book Fair. Image: BIBF

PP: Education tech was an important point of focus at the fair. It was good to see that Jiliguala was participating. Were there other exhibitors in this area that you felt were particularly effective?

LL: We were pleased to welcome a number of new companies like Jiliguala in the ed-tech area.  Another newcomer was VIPKID, a Chinese education start-up and one of the world’s biggest online education companies. They’re targeting the new generation of parents keen to support their children’s education.

Elsewhere at the fair, Ling Technologies took a stand to show Luka and Luka Hero, a smart owl-shaped robot device that can read picture books to children. Luka uses a combination of cameras and artificial intelligence, meaning that the device can follow the words a child points to on the page—and even use the parent’s voice to read.  Showcasing companies like these are important for BIBF.

In general, though, the most effective were those companies that have clearly thought about how to support the parent-child relationship or who showed how their products are both interactive and fun.

PP: How has the special children’s books part of the fair done this year?

LL: As you know, we established our standalone children’s fair last year and have focused attention on developing that sector ever since.

It has paid off this year, with more than 295 exhibitors of whom 15 were newcomers to BIBF.  We had a wide range of names from the international community this year: Scholastic, Atlantyca, and White Star among them.

We also held the 2019 BIBF Children’s Publishing Forum on the day prior to the fair, and it was very well attended. Participants heard from publishers and experts on current thinking in children’s publishing, including how to instill a love for reading in children when they’re young; the role of the parent and the parent-child relationship; and the importance of making reading and learning fun.

Many of the stands were fabulous productions that really showed how companies truly understand their market. Watching young children captivated by some of the books at the fair was fascinating. Children’s books remain a very buoyant market in China and BIBF reflected this. 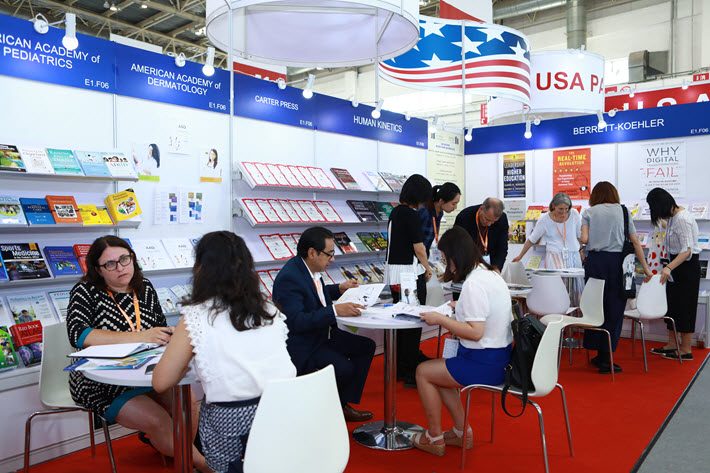 PP: Among new or changed elements of BIBF this year, what would you say was the most important?

LL: Our focus on technology was by far the most important element this year. Technology is transforming our lives in so many ways with books, entertainment, education, shopping and lifestyle all blurring at the edges, so it was important to make sure that we reflected these changes in society.

That’s why we were so glad to partner with China Telecom at BIBF in a world-first at international book fairs: the demonstration of 5G technology and what it can do to transform the reading experience.

We thought how best to show 5G’s capabilities and decided to set up a special 5G+ Reading Zone to show how faster, high quality internet speed can open up new opportunities for publishers, writers and readers.

We hosted a series of cultural activities and performances using high-profile performers, authors, and even an astronaut to demonstrate how 5G, using augmented reality, mixed reality, and virtual reality, make it possible to bring books to life and for authors to communicate with their readers in new ways.

#bibf2019 Award-winning novelist and screenwriter Liu Zhenyun interviewed China’s first female #astronaut Wang Yaping – with a life-like image of her appearing next to him on stage before an audience whilst she was elsewhere in the Fair #mindblowing #5G #scifi pic.twitter.com/bMuOVnpop0

To do this, we invited Liu Zhenyun, an award-winning novelist and screenwriter, to interview China’s first female astronaut, Wang Yaping. He was on stage before a live audience, while a life-like image of her appeared next to him although she was, in fact, elsewhere in the fair.

“The main challenge is one faced by us all in publishing: keeping pace with the speed of change in society and the industry.”Liying Lin, BIBF

We live-streamed the interview to 60 million students in 80,000 schools in China, and the fast Internet speed ensured that the conversation went smoothly without any delay.  The whole interview, which lasted for 40 minutes, was entirely lifelike and it looked as though they were sitting side by side.

We also worked with the China National Performance Arts Centre on a series of performances earlier in the fair.  These included performances by the pianist Yundi Li and other well-known singers and musicians, and was designed to show how music and text can be intertwined seamlessly to create impressive visual and audio effects.

PP: How has the professional program this year been received?

LL: As well as the Children’s Publishing Forum, we ran our annual Beijing International Publisher Forum on the day before the fair started.  There was a wide range of topics around the theme of new technologies in publishing, with 13 speakers from the industry giving us the benefit of their insight into areas such as machine learning, artificial intelligence, big data, and new media.

I should also mention another initiative. something our new BIBF exhibitors next year will want to consider: We run a new exhibitor workshop program called First Steps in Publishing in China, which is designed to give an intensive overview of China’s industry through presentations and visits to publishers and bookshops.  It’s also a great way to network before the fair gets underway.

PP: Were there gains for you in attendance this year?

LL: Every year, our visitor numbers increase. This year we welcomed 175,000 professional visitors, an increase of 16.7 percent over last year, and a total of 320,000 visitors overall.

PP: And are there specific challenges or things you like to see go better next year?

LL: I think the main challenge is one faced by us all in publishing: keeping pace with the speed of change in society and the industry.

It’s immensely exciting to see how far and how fast technology is changing publishing, and how consumers’ expectations are driving new developments.  So I expect to be able to report that #BIBF2020 will be different again as we showcase new trends, new companies and products.  It’s an exciting time to be in publishing in China.