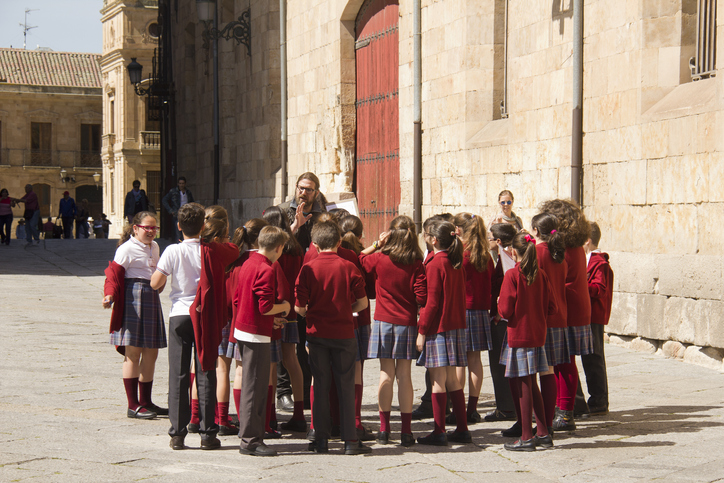 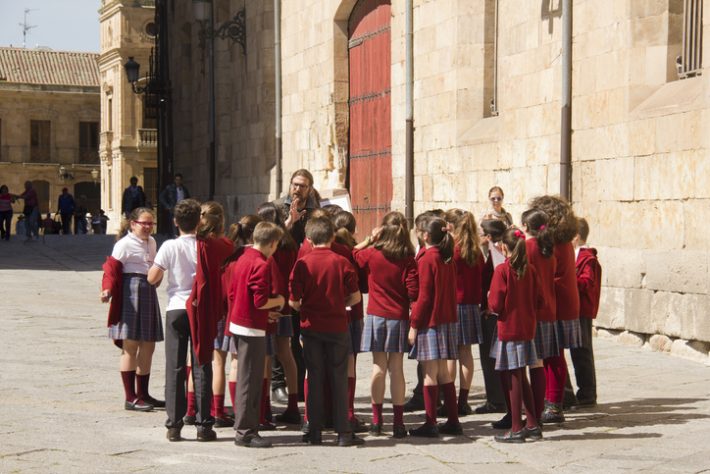 Schoolchildren on an excursion in Salamanca in northwestern Spain, the Castile and León region. Image – iStockphoto: TheHague

‘No Prospect for a Solution in the Near Future’

In a major 38-page report released today (September 5), Spain’s National Association of Publishers of Books and Teaching Materials (ANELE) charges that the country’s fractured political situation has led to an inability to create a nationwide educational system, resulting in stark inequalities for students in various regions.

“The Educational Book in Spain, 2019-2020″ (PDF, in Spanish), is a searing indictment, asserting that such overall discord has led to as many as 450 laws, decrees, orders, and resolutions being issued in the past three years in the 17 autonomous regions having to do with educational content.

The report says that the lack of a centralized set of enforceable regulations causes ANELE to see “no prospect for a solution in the near future” and a deepening set of divisions and gaps in the market’s educational sector.

“Every time we approach” to study the situation, ANELE’s report reads, “we find 17 increasingly uncoordinated educational systems.” The problem, in other words, is getting worse, not better.

A key issue, according to the report’s authors, is a fundamental lack of agreement even on the most basic goals and needs of educational viability among the autonomous communities created by the 1978 Spanish constitution.

ANELE complains of “different attitudes toward a curriculum, marked differences as a result of the division between core and free-elective subjects and their impact,” meaning that there’s no region-to-region agreement on even the most essential directions and needs of the overall nation’s students.

“These differences significantly impede how school publishing is forced to divide and multiply its offers,” the publishers say, “with increasingly limited application” to any given territory and a lot of extra expense going into such diversified editions the industry must produce.

Funding: As Divergent as the Curriculum 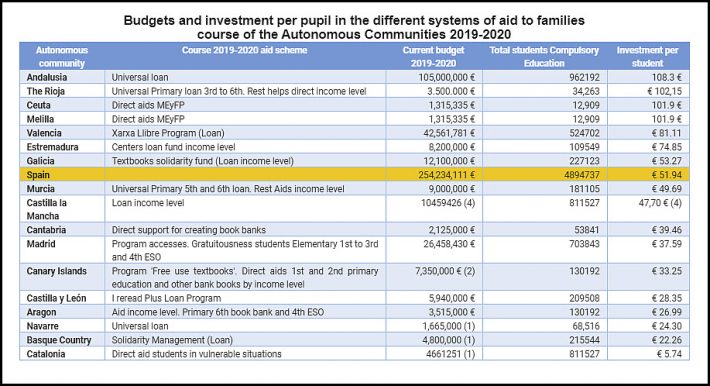 Educational funding, as might be expected, is also wildly divergent, as are the student population sizes in each region.

In Cantabria, for example, ANELE counts 53,841 students undergoing compulsory education and investment in book banks there at €2.1 million (US$2.3 million). By contrast, in the Canary Islands, there are 130,192 students and €7.4 million euros (US$8.2 million) going to book banks and “free use textbooks” to support the educational program there.

Overall, some 54 percent of the 2.6 million students in Spain this year are receiving some form of aid for textbook purchases, with about half the students participating in programs that offer texts completely free of charge.

Even the educational calendars are at odds with each other, ANELE reports, leading to a widening rate of obsolescence in textbooks. Despite a regulation saying that textbook updates must be made every four years, “It’s being done, in practice, every five, six, or even more years,” the report says. “The pace of adaptation of school materials should be the same for all students, for learning, and quite influenced by socio-economic conditions,” write the report’s authors, “not made worse by the obsolescence of teaching resources.”

The result on the faculty side, ANELE says, is “insecurity and uncertainty for our teachers, who don’t know what to expect. The impact on publishing activity is clear. Teachers’ insecurity translates into publishers’ insecurity when planning projects are so unpredictable.”

“There are 33,222 titles in print” in all of Spain’s official languages,” the report says. “Digital publishing projects continue to grow, reaching 18,308 titles.” 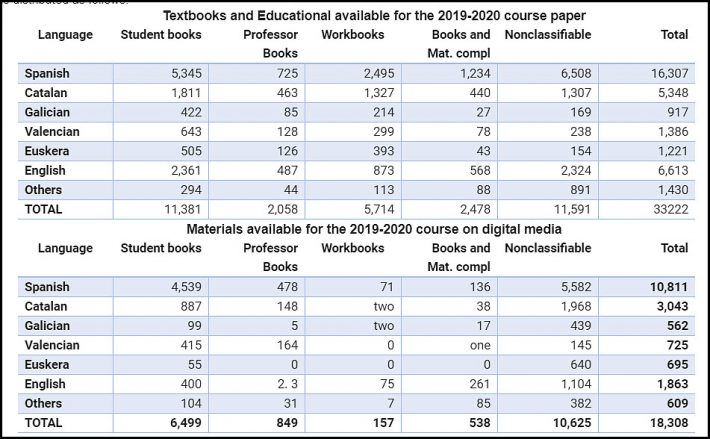 As in many world markets, book production for education remains one of the cornerstones of publishing and bookstore activity, although in recent years, ANELE reports, the industry’s output has fallen by 7 percent, despite there being a greater number of students.

And as for how the coming year’s averages may play out, all this “insecurity and uncertainty” means there’s no way, the association says, to predict.

More from Publishing Perspectives on the Spanish Market is here. And more in our Industry Notes series is here.