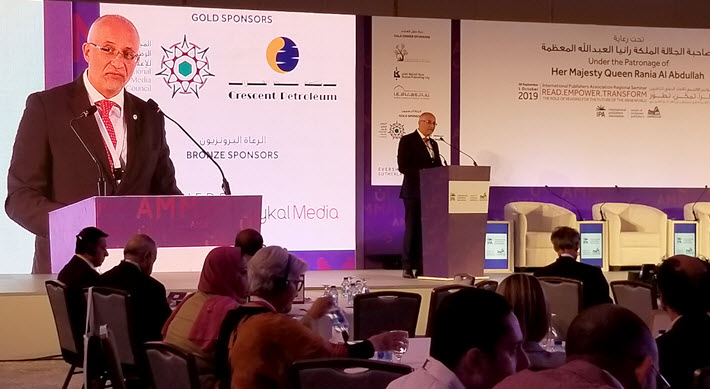 As an international community, Hugo Setzer tells delegates in Jordan, ‘We have a shared duty to educate, to inform, and to entertain.’ 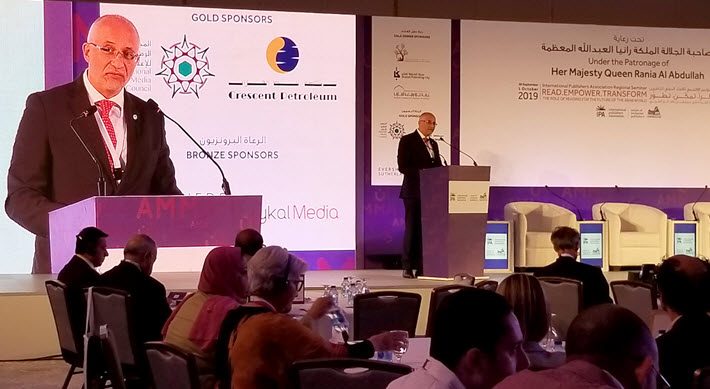 Hugo Setzer: ‘How We Operate as an Industry’

The two-day program, based at the Kempinsky Hotel in Amman, is produced in association with the Union of Jordanian Publishers and has as its goal an examination of the systemic issues facing publishers, authors, distributors, and others in the supply chain of the Arab world.

An audience drawn from the breadth of the Arab world has gathered for the event.

“Salam Aleykum,” Setzer said. “It is an honor for me to address you all this morning and to be surrounded by my fellow publishers.”

In recognizing key players who have made this event—the first of its kind in the Middle East—the comprehensive effort it is, Setzer singled out Jordan’s Queen Rania Al Abdullah, who has provided her patronage to the occasion; Fathi Al Biss, who leads the Jordanian Publshers Union (our interview is here); and IPA’s vice-president, the Sheikha Bodour Al Qasimi (our interview is here), who has, as Setzer said, “driven these regional events—including the Nigerian and Kenyan programs—”bringing us closer to our members.”

Bodour has also followed her custom of hosting a PublisHer event on the eve of the Amman program, welcoming women in publishing to a discussion and networking event at the Kempinski.

“Today’s conference title says it all,” Setzer said this mornng, referring to the program’s subtitle:  And it all starts with one word: “Read. Empower. Transform.”

Starting with that encouragement to read, he said, “By opening a book, you can learn about physics, the history of Jordan, the Mayans of Mexico,” Setzer’s own country, in which he is publisher and CEO of Manual Moderno.

“You can begin learning a language. Understanding accounting. You can make your children laugh.

“American novelist Dani Shapiro says the following about books: ‘Books don’t glow. They don’t beep. They don’t link to anything else. You can’t surf them. Or click on them. They may seem simple, even boring, at first. You might wonder, what do they do? Well, they contain nothing less than entire world. Opulent. Staggering. Rich beyond your imagining. Waiting for you to crack it open.'”

The Amman conference’s two full days of meetings sessions, speeches, presentations, panel discussions, and networking are reflective not only of the organization’s growing program of international expansion but also its status as a consultative NGO, a world body of more than 80 national and regional member publisher from 69 nations.

Below you’ll find the text of Setzer’s speech, following those opening comments. 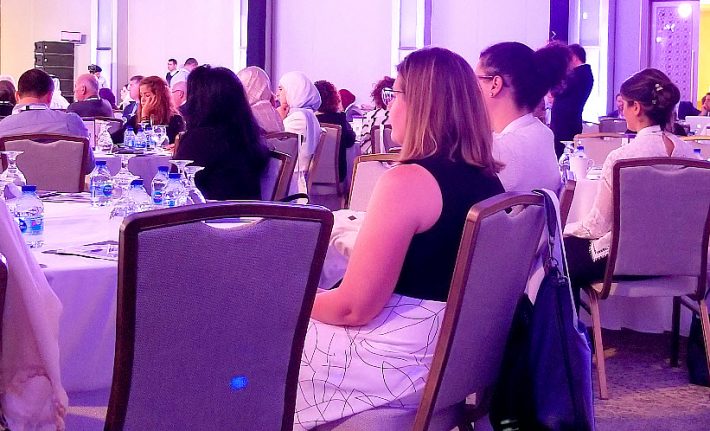 “Reading brings empowerment. The ability to understand complex ideas and to challenge them. To better ourselves. The ability for society to progress, generation by generation.

“It’s our duty to publish those works which we see fit. Together, as an industry, we must support those who risk their lives to publish works that may challenge some.”Hugo Setzer, IPA president

“It’s our duty to publish those works which we see fit. Together, as an industry, we must support those who risk their lives to publish works that may challenge some. We must honor those who have lost their freedom, or their lives, for publishing works by continuing in our defense of the freedom to publish.

“With empowerment comes the ability to transform. Smarter generations mean new economic opportunities for governments. It means that individuals can open new doors and can help others do the same. If our planet is to overcome some of our greatest challenges, then this ability to transform is vital. But before you can empower, before you can transform, you must be able to read. 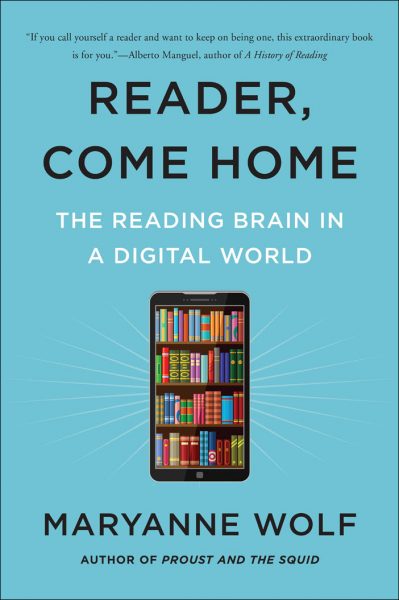 “While I may be literate, it’s not so hard to imagine the challenges for those who are not. I do not speak Arabic. The shapes on the page are indecipherable to me. You can give me a book and tell me a brighter future lies inside but I do not have the key to unlock that future.

“The author of the excellent book Reader, Come Home: The Reading Brain in a Digital World, Maryanne Wolf [HarperCollins, 2018], says the following about the importance of literacy: ‘The acquisition of literacy is one of the most important epigenetic achievements of Homo Sapiens.’

“Jordan has made huge progress over the last 50 years to bring literacy rates to 98 percent in 2018. There are still regions of the world however where such literacy rates are in the distance.

“The work of Queen Rania to train teachers and provide a platform for pupils, through Edraak K-12, is an inspirational way of tackling a very real challenge.”Hugo Setzer, IPA president

“Educational publishers are ready to play their role and work with governments around the world to help them achieve their literacy targets and build smarter generations. Success will be built on the collaboration of publishers, teachers and governments to provide a choice of locally adapted materials.

“The IPA’s Educational Publishers Forum is working hard to explain to policymakers the importance of these three elements: choice, local solutions, collaboration.

“For educational publishers to play their role, and more broadly for publishers to contribute to the progress of humanity, we need strong copyright laws, both. domestically and internationally. This is IPA’s other pillar and we work tirelessly at the World Intellectual Property Organization [WIPO], and other international forums to support publishers in their efforts to fight piracy.

“Technology also has a vital role to play and publishers are embracing that too.

“The work of Queen Rania to train teachers and provide a platform for pupils, through Edraak K-12, is an inspirational way of tackling a very real challenge.

“Even more inspirational is the way this country has established itself as a leader in tackling the learning challenge for those children forced from their homes by war, famine or disease. The futures of those children are undermined if we don’t find a way for them to read, to learn and to create a brighter future for themselves and their children.

“This region is not the only one facing such challenges and your ground-breaking work can be used in many other regions to ensure that humanitarian crises do not deprive the affected children of their right to read.”

Setzer: ‘For the Future of our Planet’ 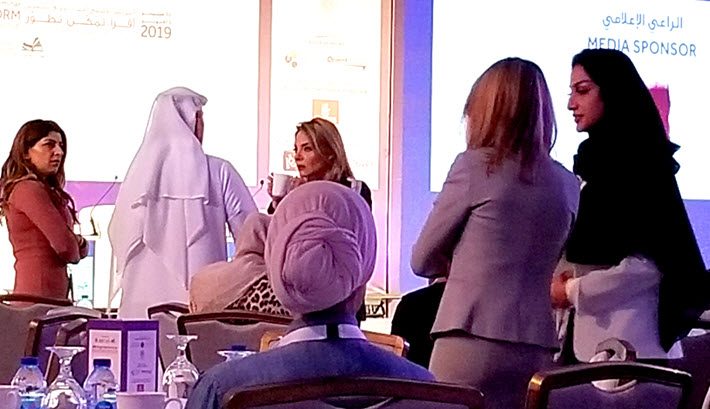 Delegates to the International Publishers Association’s Middle East seminar in Amman talk during the first coffee break of the conference. Image: Porter Anderson

“If the world is to read, it is not just national literacy rates that we need to tackle.

“When we’re in the nitty gritty of publishing a book, we don’t necessarily think we’re changing the world. But we are.”Hugo Setzer, IPA president

“We also need to think of those who are literate but visually impaired. Accessibility must become part of the normal process of how we make our books, particularly as digital publishing becomes the norm. There are millions of visually impaired people who love reading and who want to buy our books but can’t. Electronic readers, audiobooks as well as Braille should be part of what we do to reach the most readers.

“It’s one thing for us to want to teach the world to read, to have high literacy rates. But we must also inspire the love of reading. This year’s UNESCO World Book Capital City, Sharjah, put this right at the centre of its year with the motto ‘Open Books, Open Minds.’

“The IPA together with the United Nations launched the Sustainable Development Goals Book Club as a way of showing of the great books there are for children which look at all 17 of the sustainable development goals, covering everything from ending poverty to cleaning our seas. The book club is only halfway through, recommending every month books in all 6 official UN languages, including Arabic. Please look it up, and if you have books that you think are relevant then get in touch.

“But we can do more, especially in how we run our businesses, how sustainable we are, how inclusive  we are. IPA has a special envoy for diversity and inclusion to look at this very issue.

“Dear colleagues, I am a publisher, like many of you. I’m based out of Mexico City. When we’re in the nitty gritty of publishing a book, we don’t necessarily think we’re changing the world. But we are.

“Together, as an international community, we have a shared duty to educate, to inform, and to entertain. To bring to passionate readers the writings of our greatest researchers, insightful storytellers, and investigators shedding light on corruption.

“This year’s Prix Voltaire Laureate, Khaled Lotfy, imprisoned in Egypt for publishing a book, called publishing the noblest profession. I’m sure the next two days will demonstrate why.