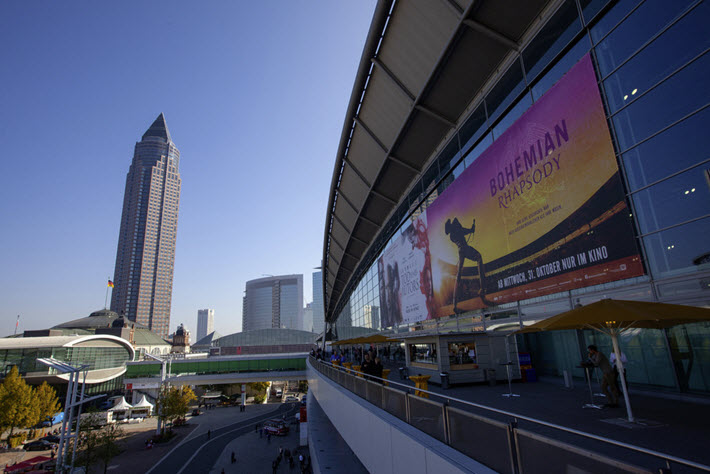 Amid extensive renovations, refurbishment, and rebuilding of the Frankfurt fairgrounds, the Frankfurter Buchmesse maps out its hall plan for the coming years. 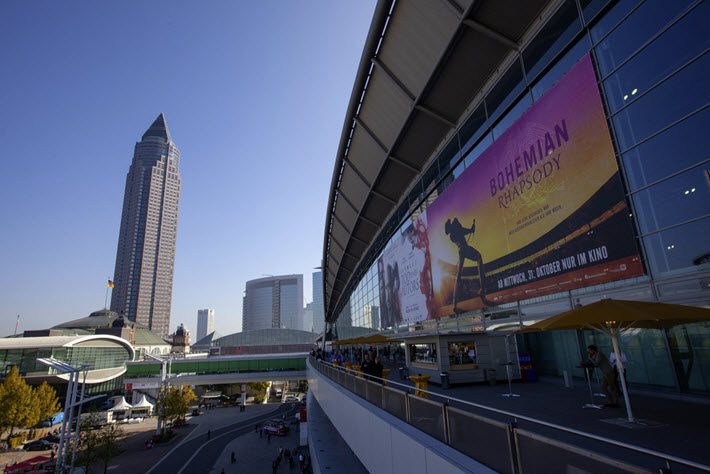 Messe Frankfurt—the site of the annual Frankfurter Buchmesse—is undergoing a years-long series of renovations, and that’s causing the organizers of the trade show to reallocate space as various parts of the campus are rebuilt or refurbished.

In media messaging today (September 3), Frankfurt is making announcements for the fair’s 2020 iteration and reflecting some of the changes trade visitors will notice during this year’s fair, October 16 to 20.

Organizers are gathering all this information under the branding “Future Frankfurt” and have created a section on the trade show’s site about plans and rationales.

Perhaps the biggest effect for the 2020 fair will involve a complete rebuild of Hall 5, which currently houses many of the international exhibitors at the fair. That rebuild is a long one, scheduled to start late this year and to be finished in 2023.

In a comment for today’s announcement, Buchmesse president and CEO Juergen Boos is quoted, saying, “We are faced with the task of adjusting the placement of our exhibitors at Frankfurter Buchmesse in a way that preserves effective areas of the fair and the business interests of our customers, while at the same time driving new business forward.

“It’s important for us to offer our exhibitors, trade visitors, and general public an experience that strengthens their relationships with each other.

“We are working hard to provide all visitor groups with access to Frankfurter Buchmesse offerings by optimizing signage, traffic flow, and hall access points.”

Hall 6 has undergone a renovation that’s to be complete in time for this year’s book fair.

As organizers describe the work on Hall 6, “This has involved largely gutting the exhibition hall’s more than 35,000 square meters and completely overhauling the ventilation, electrical, heating, and cooling systems, along with [restrooms] and food service areas.”

Because of the scope of this work, the news media are being told, “Level 6.3 is being converted into an operations center and will no longer be available as an exhibition area.”

This is the reason that the hundreds of trading tables and other facilities of the Literary Agents & Scouts Center—called the LitAg at Frankfurt—is being moved from 6.3 to the Festhalle building, which is near the Messe’s “City” entrance.

Here is a breakdown of anticipated hall usage and designations as renovations and rebuilding continue to revamp the vast Messe Frankfurt space.

Hall 1 will offer two levels and give the Frankfurter Buchmesse a new entrance with a lot of window space. This is close to the “City” entrance to the complex and to Hall 3.

Hall 4.0: Scandinavia, the Netherlands, Belgium (Flanders), Central and Eastern Europe, Southeastern Europe; THE ARTS+: B3 (Biennale of the Moving Image); Business Club; cosplay (on the weekend) 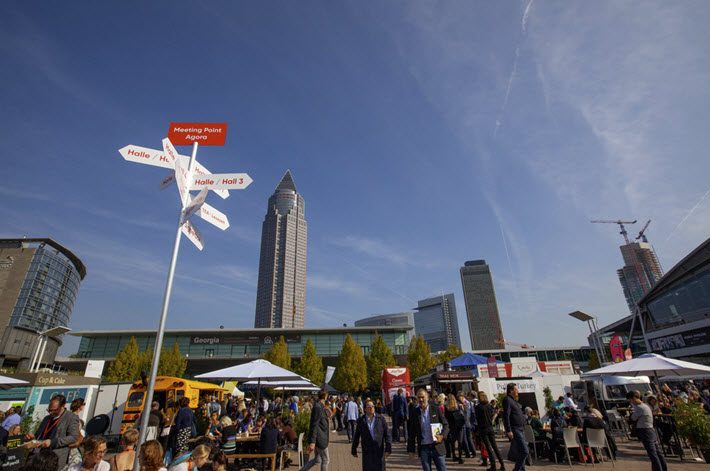 In the central Agora at the Messe Frankfurt site of Frankfurter Buchmesse. Image: FBM, Anett Weirauch

The Frankfurt program is in the process of creating thematic “areas,” too, as readers of Publishing Perspectives may know from recent coverage.

Similarly, there’s a “Frankfurt Authors” focus for German-language writers in Hall 3.0, another area. An dual set of educational content areas, Frankfurt EDU, will be in Halls 31. and 4.2 for exhibitors and events. And a “children’s area,” Frankfurt Kids, is being developed in this and coming years in Foyer Halls 5.1 and 6.1.

A place for activities—simply called an Event Area—is to go between Hall 1 and the Festhalle. On Frankfurt’s weekend this year (October 19 and 20), there’s to be a football match there between the German national authors team and challenges from Guest of Honor Norway. In addition, there’s to be what organizers call “a top-flight program of events” on the Open Air Stage.

More subject-specific areas, we’re told. are ahead in 2020.